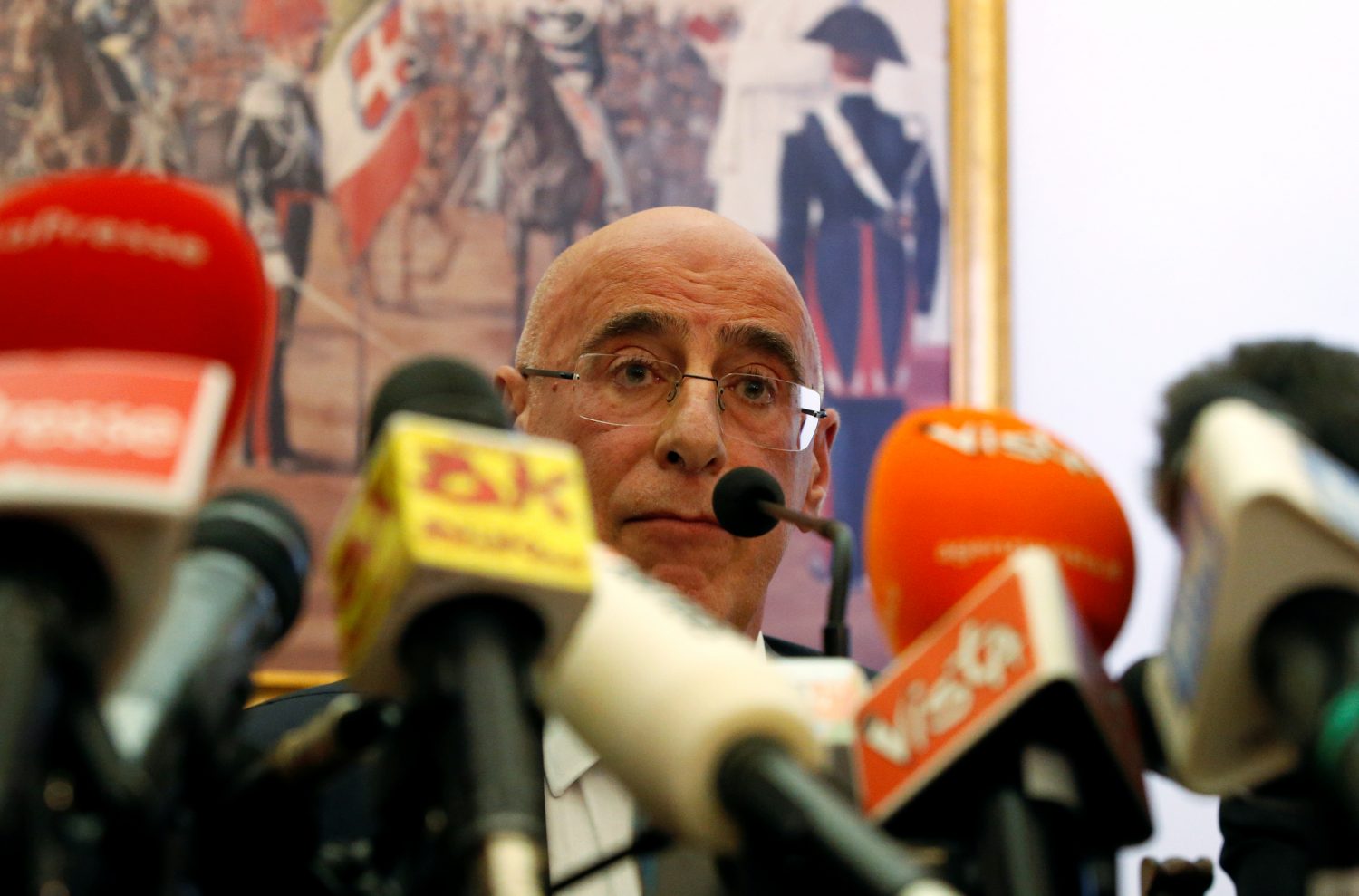 ROME (Reuters) – An American teenager accused of stabbing an Italian policeman to death last week began to weep, and his alleged accomplice voiced disbelief, when told after their arrest that the officer had died of his wounds, a prosecutor said on Tuesday.

Finnegan Lee Elder, 19, is accused of killing the policeman in central Rome with an 18-cm (7-inch) blade in an incident that shocked Italians and raised questions over both the motive for the attack and police interrogation methods.

Elder and fellow student Gabriel Christian Natale-Hjorth, 18, were arrested on Saturday on suspicion of murdering Mario Cerciello Rega, 35, after the policeman intervened in a dispute that began over a drug deal involving the pair, police say.

The court-appointed lawyers for the American pair could not be reached for comment. The Elder family said in a statement on Tuesday it had not spoken to him since his arrest on Saturday.

“The situation is fluid. Finn’s parents are coping,” the statement said.

Police say Cerciello Rega, unarmed and in plain clothes, was attacked by Elder in the early morning of Friday in an affluent Rome neighborhood as he was trying to arrest him and Natale-Hjorth on suspicion of stealing a backpack.

The policeman and another officer, who was allegedly injured in the incident by Natale-Hjorth, had been called to the scene after the pair allegedly stole the backpack from a drug-dealer who they believed had cheated them, said Francesco Gargaro, head of the capital’s Carabinieri police force.

Prosecutor Nunzia D’Elia told a news conference on Tuesday that Natale-Hjorth, had reacted with disbelief when told of the policeman’s death, saying “Really dead? Dead dead?”

In an order for the pair to be held in jail pending investigation, a judge said the Americans had told investigators they had not been aware that Cerciello Rega was a policeman.

However, police chief Gargaro said on Tuesday that Cerciello Rega and his colleague had clearly identified themselves as police to the pair before the attack.

Police have also begun an investigation into the pair’s interrogation after a photo emerged of Natale-Hjorth in police custody, sitting blindfolded, hands cuffed behind his back.

Natale-Hjorth and Elder, both from San Francisco, were likely to have been under the influence of drugs or alcohol when they were arrested on Saturday but were judged fit to be questioned, prosecutor D’Elia said.

She and Gargaro declined to comment on the inquiry into the interrogation.

Rome’s public attorney office said the investigation into the stabbing was still ongoing.

An Italian lawyer for Elder, Francesco Codini, told the New York Times that the two men had asserted their right to remain silent during a court hearing in Rome on Saturday afternoon. 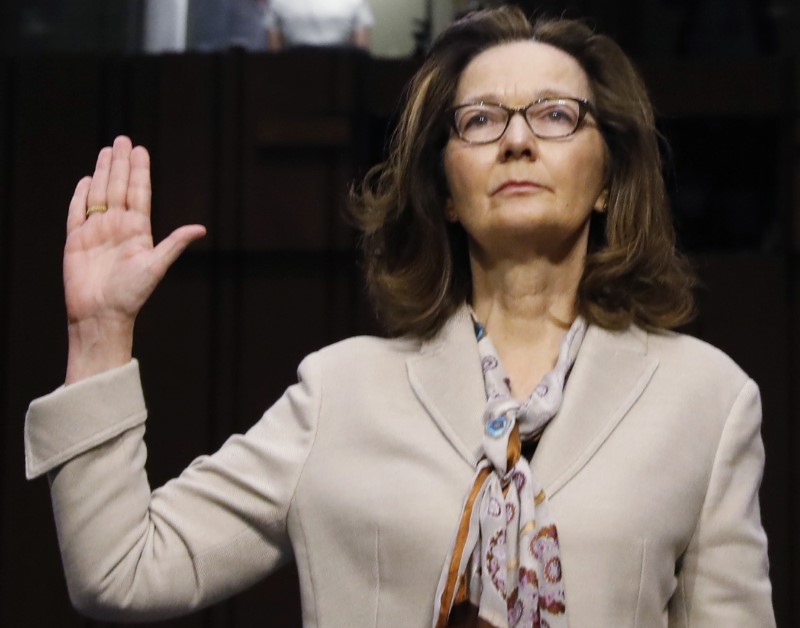 By Patricia Zengerle and Mark Hosenball

WASHINGTON (Reuters) – U.S. President Donald Trump’s nominee to head the CIA promised lawmakers on Wednesday she would never resume a program of harsh interrogations, often denounced as torture, that has been the major issue complicating her confirmation.

Gina Haspel, currently the spy agency’s acting director, also told her Senate confirmation hearing she would not carry out any order from Trump that she found morally objectionable.

“My moral compass is strong. I would not allow CIA to undertake activity that I thought was immoral, even if was technically legal. I would absolutely not permit it,” Haspel told the Senate Intelligence Committee.

Haspel also faced questions during the hearing about her role in the use of harsh interrogation methods during former President George W. Bush’s administration, as well as the destruction of videotapes documenting the questioning.

“Having served in that tumultuous time, I can offer you my personal commitment, clearly and without reservation, that under my leadership, on my watch, CIA will not restart such a detention and interrogation program,” Haspel testified.

Public questioning of Haspel on issues such as the effectiveness of the interrogations, CIA drone strikes and agency “renditions” of suspected militants to third countries may be limited because the operations remain classified.

“CIA has learned some tough lessons, especially when asked to tackle missions that fall outside our expertise,” Haspel said, explaining that in retrospect the agency was not prepared to conduct the detention and interrogation program employed after the Sept. 11, 2001, attacks on the United States by al Qaeda militants.

Haspel needs 51 votes to be confirmed as the first woman director of the CIA in the 100-seat Senate, where Trump’s fellow Republicans hold a 51-49 majority. The agency’s former deputy director, she would succeed Mike Pompeo, a Republican former congressman confirmed last month as secretary of state.

Haspel already has the strong support of many Republicans. As he opened the hearing, the panel’s Republican chairman, Richard Burr, praised Haspel.

“I believe your intellectual rigor, honorable service and outstanding judgment make you a natural fit to lead the CIA,” he said, urging that the hearing not be made “a trial about a long-shuttered program.”

But Haspel could face a difficult time being confirmed. At least one Republican, Senator Rand Paul, has said he opposes her, and others have said they will wait to see how she does at Wednesday’s hearing.

No Democrat has yet expressed support for Haspel.

Senator Mark Warner, the committee’s top Democrat, said his vote on Haspel’s confirmation will largely depend on how she expresses her current views on the harsh techniques and a 2005 decision to destroy tapes of interrogations.

“We must hear how you would react if the president asks you to carry out some morally questionable behavior that might seem to violate a law or treaty,” Warner said in his opening statement.

Warner also said he would want Haspel’s commitment to cooperate in investigations into Russia’s role in the 2016 U.S. election. Trump has called those investigations a “witch hunt.”

Before the hearing, a small group of protesters started shouting, “Say no to torture.” They were forcibly removed by the Capitol police.

Haspel described what she called the complex challenges her agency must confront, including terrorist groups, a nuclear threat against the continental United States by North Korea, “destabilizing Iranian adventurism,” China’s ambitions on the global stage and “an aggressive and sometimes brutal Russia.”

An undercover officer for most of her more than 30-year career, Haspel in 2002 served as CIA station chief in Thailand, where the agency ran one of the secret prisons where suspected al Qaeda extremists were interrogated using procedures that included waterboarding, which simulates drowning.

A 2014 Senate Intelligence Committee investigation concluded that harsh intelligence methods during Bush’s presidency were “not an effective way of obtaining accurate information or gaining detainee cooperation.”