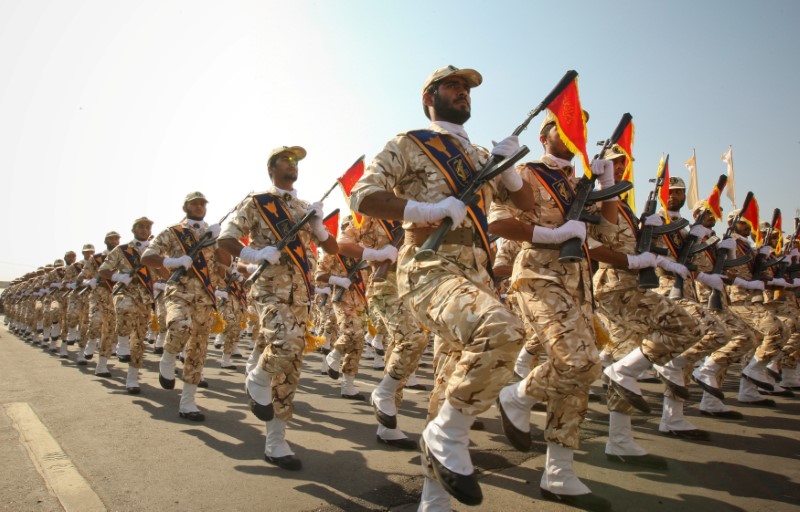 LONDON (Reuters) – Iran promised on Monday to give a “crushing” response if the United States designated its elite Revolutionary Guards as a terrorist group.

The pledge came a week before President Donald Trump announces final decision on how he wants to contain Tehran. He is expected on Oct 15 to “decertify” a landmark 2015 international deal to curb Iran’s nuclear program, a step that by itself stops short of pulling out of the agreement but gives Congress 60 days to decide whether to reimpose sanctions.

Trump is also expected to designate Iran’s most powerful security force, the Revolutionary Guards Corp (IRGC) as a terrorist organization, as he rolls out a broader U.S. strategy on Iran.

“We are hopeful that the United States does not make this strategic mistake,” foreign ministry spokesman Bahram Qasemi was quoted as saying by the state news agency IRNA at a news conference.

“If they do, Iran’s reaction would be firm, decisive and crushing and the United States should bear all its consequences,” he added.

Individuals and entities associated with the IRGC are already on the U.S. list of foreign terrorist organizations, but the organization as a whole is not.

Jafari also said that additional sanctions would end the chances for future dialogue with the United States and that the Americans would have to move their regional bases outside the 2,000 km (1,250 mile) range of IRGC’s missiles.

In an interview that was aired on Saturday night, Trump accused Iran of “funding North Korea” and “doing things with North Korea that are totally inappropriate”.

“Israel and some specific countries are raising these accusations to create Iranophobia.”

In his first speech to the U.N. General Assembly in September Trump called Iran “a corrupt dictatorship”, and the nuclear deal negotiated by his predecessor Barack Obama “an embarrassment”.

The deal, which was also supported by Britain, France, Germany, Russia and China, saw Iran agree to curbs on its nuclear program in return for the lifting of international sanctions that had damaged its economy.

The Kremlin said on Monday that any U.S. withdrawal from the nuclear deal would have “negative consequences.”

Gemran Foreign Minister Sigmar Gabriel said Germany was ready to increase pressure on Iran with diplomatic means, but that “we do not want to see this agreement damaged”.

British Prime Minister Theresa May, who supports the nuclear deal, and Israeli Prime Minister Benjamin Netanyahu, who opposes it, agreed in a phone call on Monday that they need to be “clear-eyed” about the threat Iran poses to the Middle East.

“They agreed that … the international community should continue working together to push back against Iran’s destabilizing regional activity,” May’s spokesman said in a statement.

Despite the nuclear deal, Washington still maintains its own more limited sanctions on Iran over its missile program and over accusations Tehran supports terrorism.

The Trump administration is seeking to put more pressure on the IRGC, especially over recent ballistic missile tests and what Washington has called its “malign activities” across the Middle East.

U.S. sanctions on the IRGC could affect conflicts in Iraq and Syria, where Tehran and Washington both support warring parties that oppose the Islamic State militant group (IS).

The U.S. government imposed sanctions in July on 18 entities and people for supporting the IRGC in developing drones and military equipment. In August, Congress overwhelmingly approved the “Countering America’s Adversaries Through Sanctions Act” which imposed new sanctions on Iran for its ballistic missile program, as well as sanctions on Russia and North Korea.