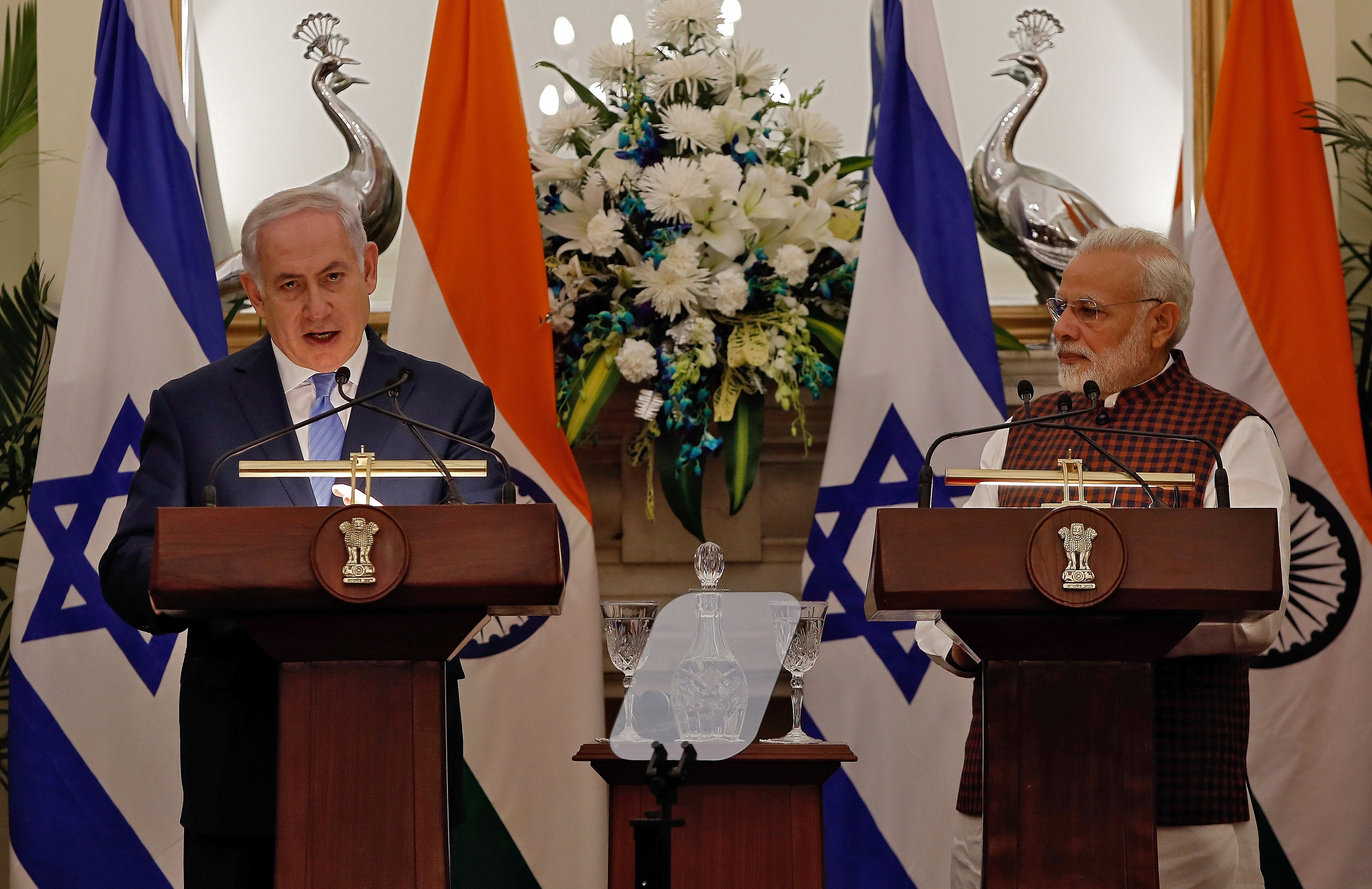 NEW DELHI (Reuters) – Israeli Prime Minister Benjamin Netanyahu said on Tuesday he was discussing with India ways to strengthen security cooperation against the menace of from Islamist extremism that both democracies faced.

Netanyahu spoke while on a six-day tour of India, the first by an Israeli premier for 15 years, and is being feted by Indian counterpart Narendra Modi, whose Hindu nationalist party has long admired Israel for its tough posture against terrorism.

India, wary of upsetting Arab nations on which it was dependent for oil, and heeding the sentiments of its own large Muslim minority, kept a distance from Israel for decades. But under Modi, the two sides have embraced a closer relationship based on security and economics.

The right-wing Netanyahu told a security conference that India and Israel were two democracies with a natural affinity, but their open and liberal societies faced risks.

Both Israel and India have long sought to counter militant Islamists – in Israel’s case, mainly from Gaza and Egypt’s Sinai region and, in India’s case, mainly from Pakistan. Away from the public eye, India and Israel have been cooperating against the threat through, in part, intelligence sharing, officials say.

“We’ve discussed in this visit how we can strengthen our two nations in the civilian areas, in security areas, in every area,” Netanyahu told the conference.

His trip to India comes just six months after Modi made the first trip by an Indian prime minister to Israel, during which he did not go to Ramallah, seat of the self-ruling Palestinian Authority and a customary stop for leaders visiting the region.

He will join an 11-year-old Israeli boy, Moshe Holtzberg, whose parents were murdered by Pakistan-based militants in Mumbai in 2008, for a memorial event at the Indian financial hub’s Jewish center where the attack took place.

The boy, who lives with his grandparents in Israel, arrived on Tuesday as a guest of Modi. 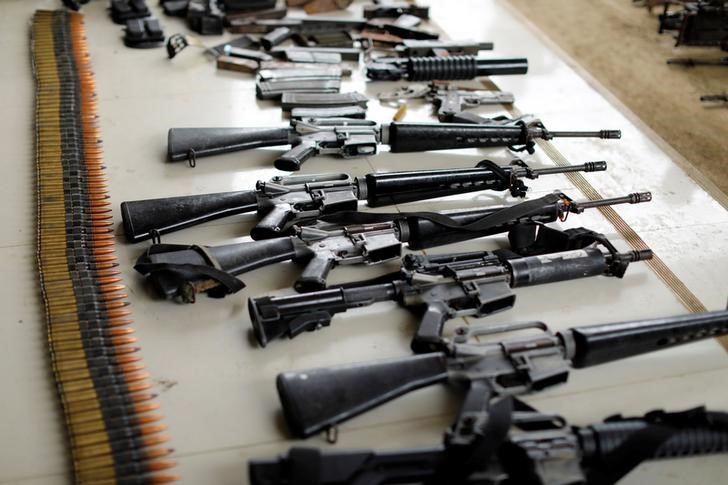 MANADO, Indonesia (Reuters) – Southeast Asian nations will cooperate more closely with intelligence and law enforcement authorities from the Middle East amid “grave concerns” about an elevated threat from Islamic State (IS) in the region.

Representatives from four Southeast Asian nations, Australia and New Zealand met in the Indonesian city of Manado on Saturday to develop a response to the increased danger posed by IS, highlighted by the occupation of parts of the southern Philippines city of Marawi by militants owing allegiance to the group.

The battle has sparked alarm that as IS suffers reversals in Iraq and Syria, it is seeking to create a stronghold in the region, buttressed by Southeast Asian fighters returning from the Middle East and other militants inspired by the ultra-radical group and the Marawi conflict.

Describing the regional threat from Islamist militants as growing and rapidly evolving, a joint statement by the participants called for enhanced information sharing, as well as cooperation on border control, deradicalisation, law reform and countering Islamists’ prolific use of social media to plan attacks and lure recruits.

“We must face the threat together,” said Wiranto, Indonesia’s co-ordinating minister for security.

The meeting was co-hosted by Indonesia and Australia. The other participants were Malaysia, the Philippines, Brunei and New Zealand.

The main initiative was a law enforcement dialogue to be co-hosted by the Indonesian and Australian police forces in August bringing together key stakeholders affected by IS.

Two senior law enforcement sources at the Manado meeting said countries from the Middle East, including Turkey, would attend the summit to kick off cooperation across the two regions.

Islamic State has a dedicated military unit made up of hundreds of Southeast Asian fighters in Syria and Iraq led by Indonesian militant Bahrumsyah.

According to Indonesian police, there are 510 Indonesian supporters of Islamic State in Iraq and Syria, including 113 women.

About 20 Islamist fighters from Indonesia are believed by counter-terrorism authorities to be fighting in Marawi, a predominantly Muslim city on the Philippines island of Mindanao which has been a hotbed of Islamist unrest for decades and a magnet for militants from around the region.

One of leaders of the militants in Marawi is a Malaysian Islamic studies lecturer, Ahmad Mahmud, who arranged financing and the recruitment of foreign fighters.

While the Association of Southeast Asian Nations, the multilateral regional forum made up of 10 nations, has long had a framework for cooperation on combating violent extremism, analysts and officials say coordination has been poor.

A report last week from the Jakarta-based Institute for Policy Analysis of Conflict identified “formidable obstacles” to greater cooperation between Indonesia, Malaysia and the Philippines, the front-line states facing the Islamist threat in Southeast Asia.

After more than two months of intense fighting, IS-aligned militants still control part of Marawi. Over 600 people have been killed, including 45 civilians and 114 members of the security forces. The government has said the other dead are militants. 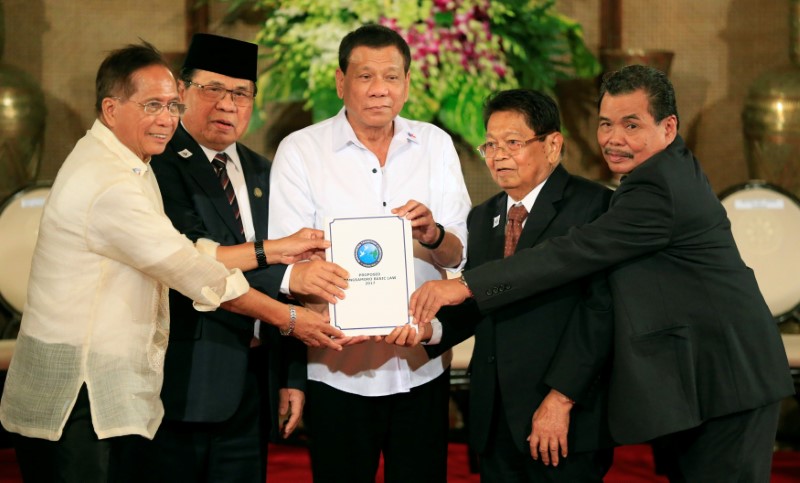 It aims to turn predominantly Muslim parts of the southern island of Mindanao into an autonomous region with its own executive, legislature and fiscal powers.

“May I say to you my brothers … I will support and hasten this instrument as it goes to the legislature,” Duterte said in a ceremony for the handover of the bill, drawing loud applause.

“There will be no objections of the provisions of all that is consistent with the constitution and aspirations of the Moro people.”

Passage of the bill would be a major achievement for Duterte, who was a mayor in a Mindanao city for 22 years and has made peace deals with separatists and Marxist rebels a priority for his year-old government.

The bill’s submission comes at a critical time for the Philippines, as fears grow that militants allied with Islamic State have exploited disillusionment over the failure of the previous Congress to pass the law, and have used it to recruit fighters and further a radical agenda.

Rebels inspired by Islamic State have occupied the commercial heart of Marawi City, on Mindanao, through seven weeks of air strikes and battles with government troops that have killed more than 500 people and displaced 260,000, marking the country’s biggest security crisis in years.

“These misguided people have filled the vacuum created by our failure to enact the basic law and (they) feed into the frustration of our people.”

The law, details of which were not immediately available, calls for the creation of a self-administered territory within what the Philippines called Bangsamoro, meaning “Moro nation”, referring to the southern Muslims that Spanish colonialists called “Moros”.

In a recent interview with Reuters in Cotabato City, Mohagher Iqbal, the MILF’s top peace negotiator, said the hope was for Congress to pass the law and a transition period to start in 2019, with elections in 2022 for an 80-seat assembly.

“Right now we don’t really know the thinking of the people,” he said. 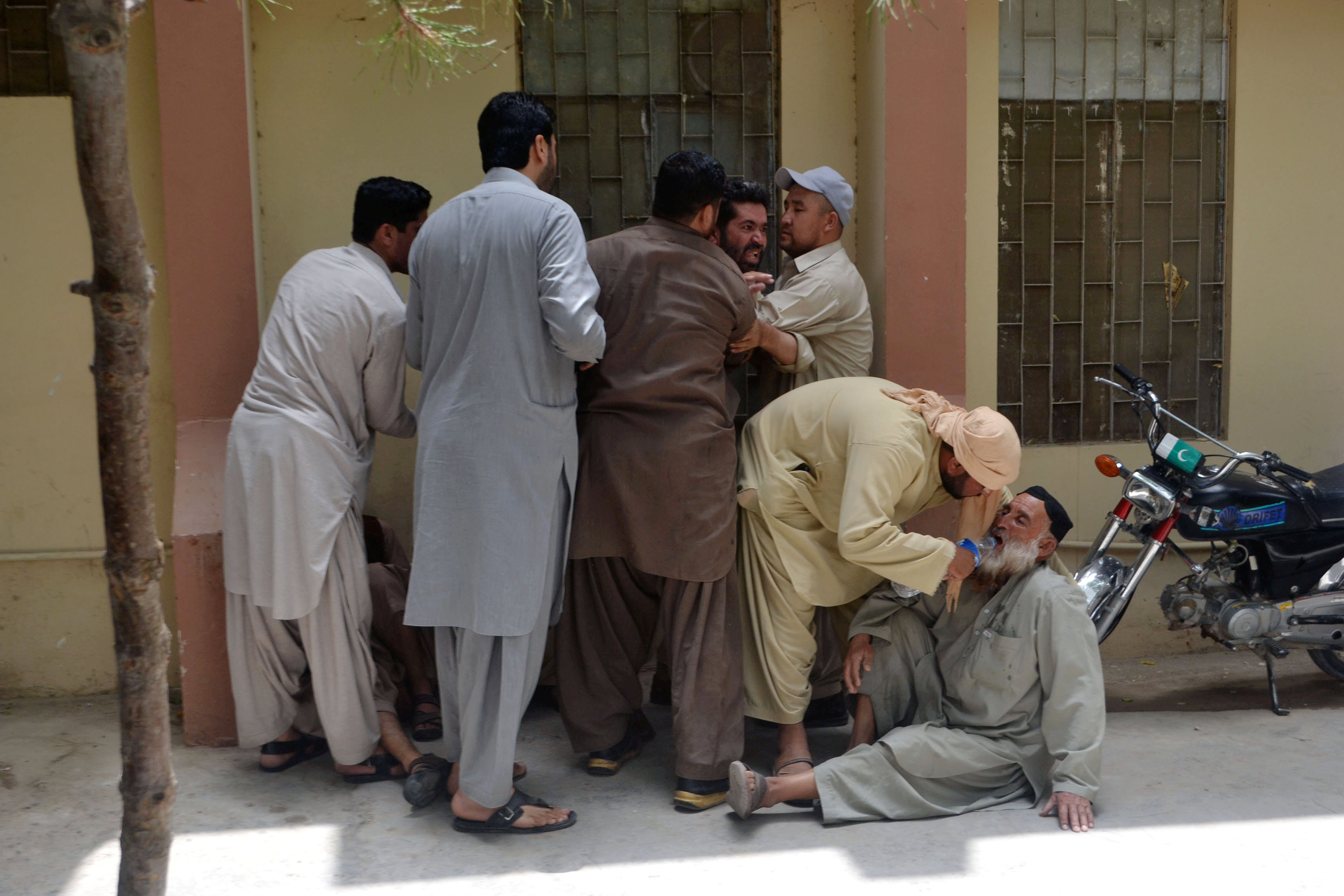 QUETTA, Pakistan (Reuters) – Islamist gunmen on Thursday killed a senior police official and three other policemen guarding him in the Pakistani city of Quetta, police said, in an attack claimed by both the Pakistani Taliban and Islamic State.

“The head and upper parts of all the four victims were targeted,” said Sultan, adding that one policeman was critically wounded.

A faction of the Pakistani Taliban, known as Jamaat-ul-Ahrar, carried out the attack, according to the faction’s spokesman, Asad Mansur.

Islamic State (IS) also claimed the attack on it Amaq News Agency website. Jamaat ur Ahrar and IS have in the past jointly claimed responsibility for attacks in Pakistan.

It was second such attack in a week targeting senior police officers in the volatile Baluchistan province, which borders Afghanistan and Iran. Quetta is the provincial capital.

A suicide bomber on Monday killed a district police chief and his guard in the town of Chaman on the Afghan border. The Pakistani Taliban claimed that bombing in text messages and emails to media.

Violence in Baluchistan has raised concern about security for projects in the $57-billion China Pakistan Economic Corridor, a planned transport and energy link from western China to Pakistan’s southern deep-water port of Gwadar.

Resource-rich Baluchistan has long been plagued by insurgencies by separatists. Islamist groups such as the Taliban and Islamic State also carry out attacks in the region.

Islamist militants have killed thousands of people in Pakistan over the last decade or more, in their bid to impose hardline rule. 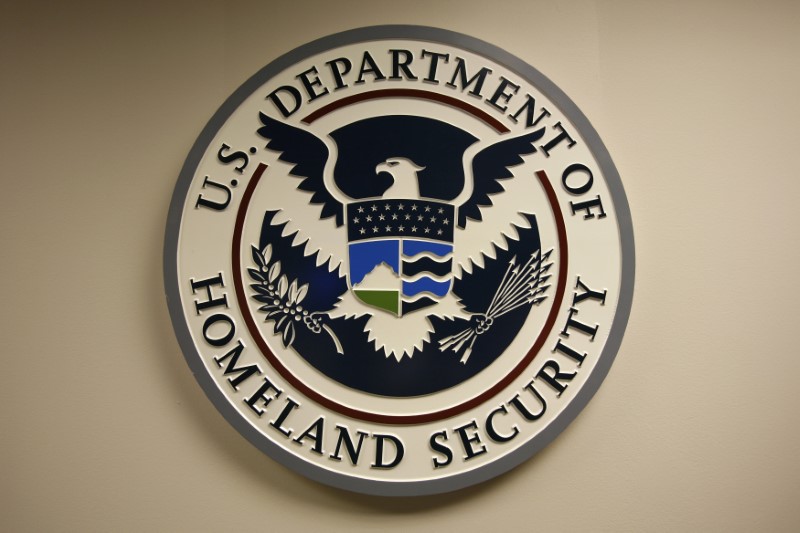 By Julia Harte and Dustin Volz

In an update to awards announced in January by former President Barack Obama’s administration, the department released a new list of grant recipients and amounts, shifting money to law enforcement offices and away from groups that combat U.S.-based extremism.

Reuters reported in February that President Donald Trump’s administration wanted to revamp the program to focus solely on Islamist extremism.

A DHS spokeswoman said the department changed the grant criteria after the release of the initial list to consider whether applicants would partner with law enforcement, had experience implementing counter-extremism prevention programs, and would be able to continue after the awards were spent.

“Top-scoring applications that were consistent with these priorities remained as awardees, while others did not,” said DHS spokeswoman Lucy Martinez.

A spokesman for the Alameda County Sheriff’s Office in California said it would use the money to address extremism “on all fronts,” not just Islamist violence. Sergeant Ray Kelly cited violent clashes between right-wing and left-wing demonstrators that recently erupted in the city of Berkeley as an example of local extremism in the county.

Kelly said the office would use the grant money to train officers to better recognize and address signs of alienation that make young people vulnerable to extremism, with the help of behavioral health counselors who are already on staff.

The Muslim Public Affairs Council, a nonprofit group that works to improve public understanding and policies that affect American Muslims, said the Trump administration revoked its nearly $400,000 grant because the group “did not meet the criteria of working with law enforcement to counter violent extremism.”

The revised list also omitted several original awardees focused on U.S.-based extremism, such as Life After Hate, which tries to steer young people away from far-right extremism.

Christian Picciolini, a co-founder of Life After Hate, told Reuters his group was planning to use its $400,000 grant to scale up its counselor network of former extremists to “meet the highly increased requests for our services since Election Day.”

“The current administration’s lack of focus on domestic white extremist terrorism, let alone its denial to even acknowledge it exists, is highly troubling,” Picciolini wrote in an email.