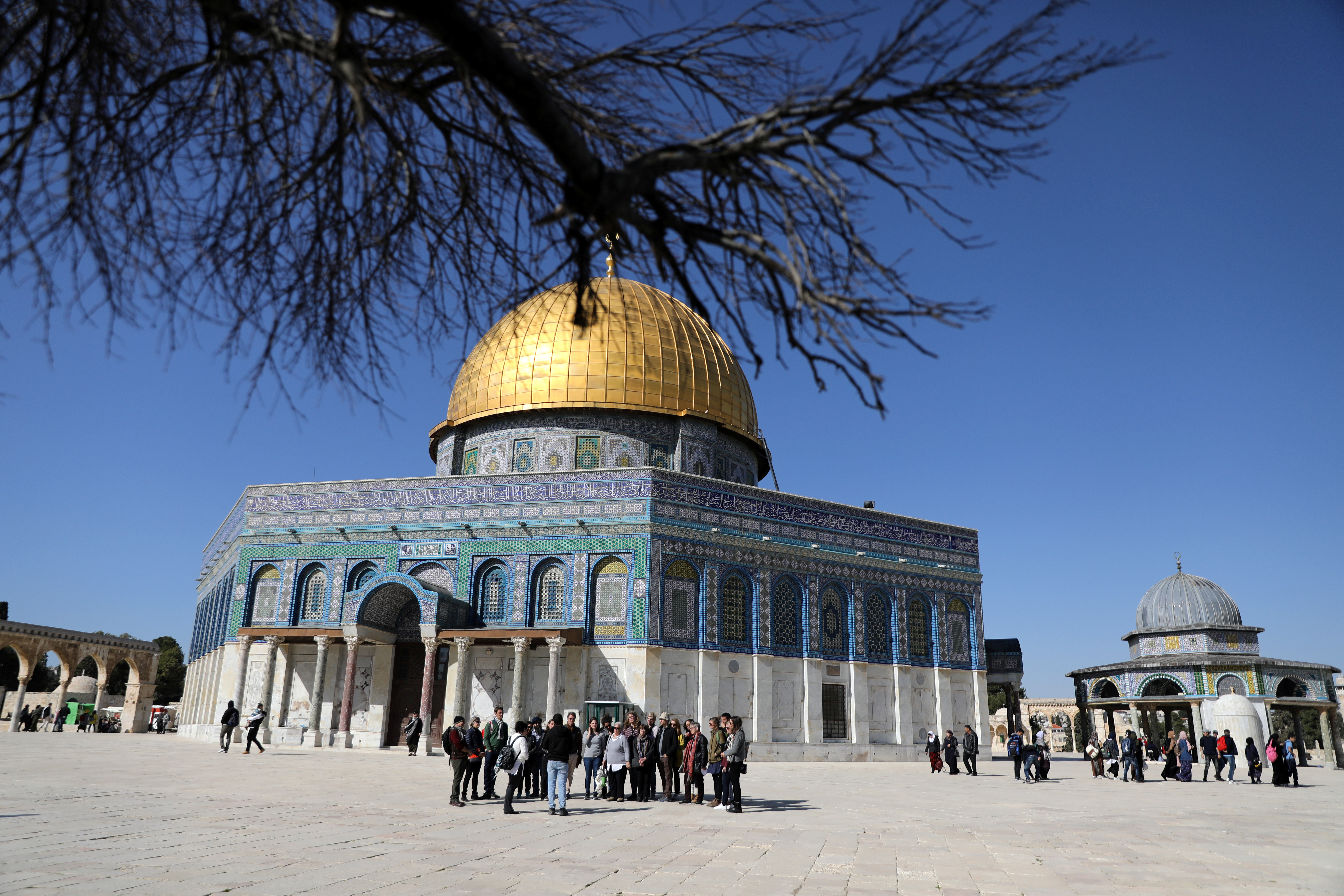 By Rami Ayyub and Stephen Farrell

JERUSALEM (Reuters) – On a Jerusalem plaza looking up at the Western Wall and the Dome of the Rock, a crowd gathers in front of two guides, listening attentively, a common sight in a city packed with pilgrims and tourists visiting its religious landmarks.

What is unusual is that one of the guides is Palestinian, one is Israeli, and they are taking turns to give their perspectives on the city known to Jews as Yerushalayim and to Arabs as al-Quds..

“We are in Jerusalem, which is the capital of the Jewish state. We are in one of the holiest places in the world for Christianity. And the keys are held by Muslim families,” said Israeli guide Lana Zilberman Soloway, who spoke first as the group reached the Church of the Holy Sepulcher where Jesus is believed to be buried. “And all three coexist at the same time.”

Her counterpart, Noor Awad, from Bethlehem in the occupied West Bank just a few km (miles) away, took a different view of the status quo, noting that Muslims and Christians from the West Bank or Gaza need Israeli travel permits to worship here.

“For Palestinians, this is the capital of Palestine and the capital of their country,” said Awad, 28. “If you don’t get that permission, you can’t come actually here to pray.&nbsp;So the place is being used, and plays a lot into the two narratives and the conflict we have today.”

The two guides heard each other out politely, with the occasional quip or raised eyebrow. Two dozen tourists, mainly foreigners living in the city, peppered them with questions.

The company, MEJDI Tours, says its “Dual Narrative” tour was “created in partnership by Israelis, Palestinians, Arabs, and Jews”. The weekly tours have been underway since last October.

Israel considers all of Jerusalem its capital. The Old City and holy sites lie in the mainly Arab eastern half, captured by Israel in a 1967 war and annexed in a move not recognized internationally. Palestinians say the eastern half is occupied land and must become the capital of a future Palestinian state.

At the heart of Old City, the tour came to the hill known to Jews as the Temple Mount and to Muslims as the Noble Sanctuary.

“Where the Dome of the Rock today is standing, the Prophet Muhammad ascended to Heaven to talk to God,” Awad told the tour party, describing what Muslims consider the holiest spot on earth outside of the two Arabian cities Muhammad called home.

“That’s a very central event, somehow similar to the story of Moses talking to God from Mount Sinai.”

For Jews, it is the site of the biblical temple, destroyed by Babylonian conquerors, rebuilt and razed again under the Romans. The Western Wall, a restraint for the foundations built by Herod the Great 2000 years ago, is a sacred place of prayer.

“All the way down deep underground, underneath the golden dome, 5779 years ago, God created the world. 4,000 years ago we believe Abraham came to bind Isaac on that exact spot,” Zilberman Soloway said.

Dave Yedid, 26, a Jewish seminary student from Long Island, New York who came on the tour, said: “exactly what differs in the sort of Jewish Zionist narrative versus the Palestinian narrative is something I’ll take home with me.”

“I wanted to see those two side by side.” 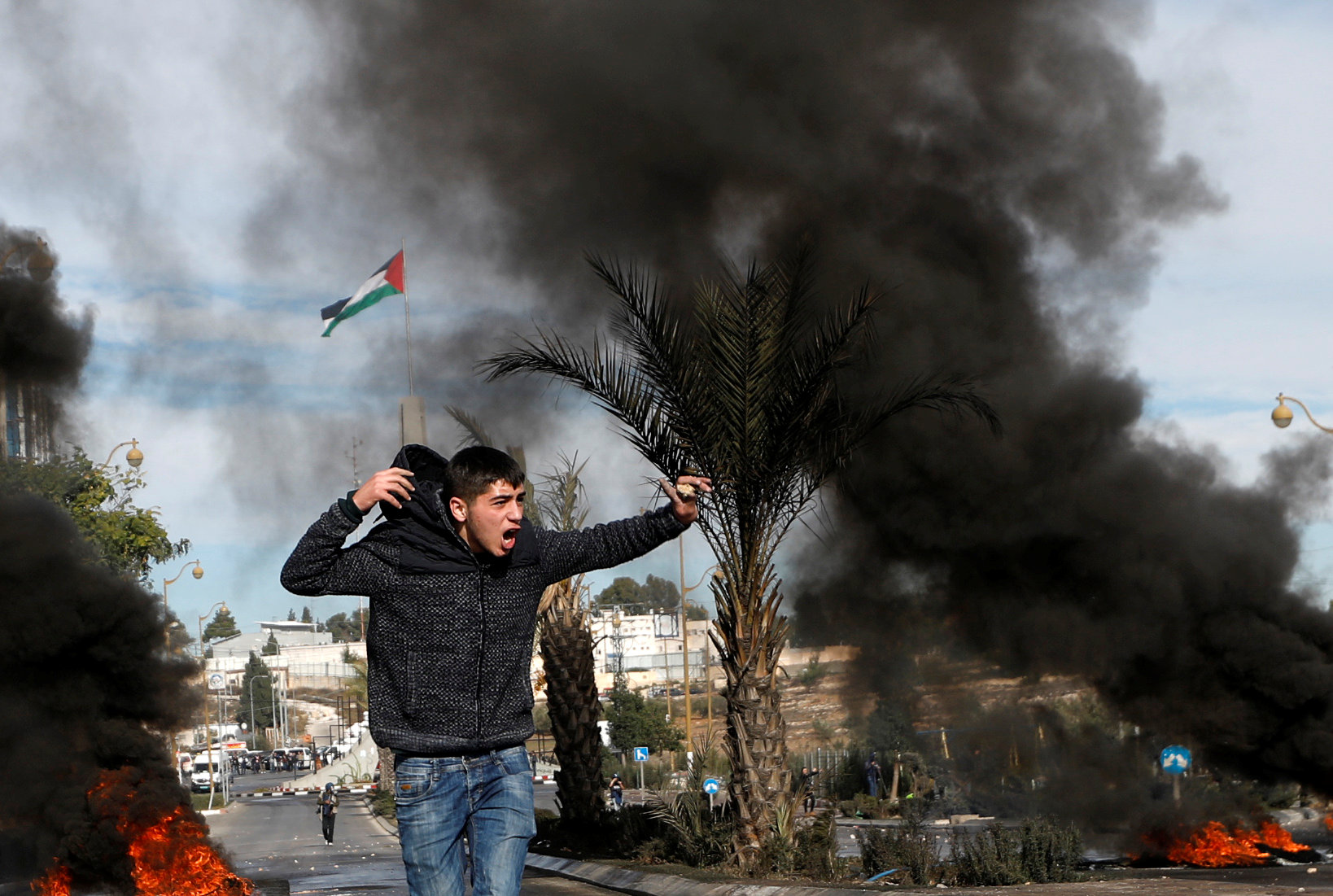 Four days of street protests in the Palestinian territories over Trump’s announcement on Wednesday have largely died down, but his overturning of long-standing U.S. policy on Jerusalem — a city holy to Jews, Muslims and Christians — drew more Arab warnings of potential damage to prospects for Middle East peace.

“Our hope is that everything is calming down and that we are returning to a path of normal life without riots and without violence,” Israeli Defence Minister Avigdor Lieberman said on Army Radio.

But in Jerusalem, a security guard was in critical condition after a 24-year-old Palestinian man from the occupied West Bank stabbed him after approaching a metal detector at an entrance to the city’s central bus station, police said. The alleged assailant was taken into custody after a passer-by tackled him.

In public remarks on Sunday, Turkish President Tayyip Erdogan, a frequent critic of Israel, called it an “invader state” and a “terror state”.

Israeli Prime Minister Benjamin Netanyahu who spoke at a news conference in Paris alongside French President Emmanuel Macron after the two leaders met, fired back:

“I’m not used to receiving lectures about morality from a leader who bombs Kurdish villages in his native Turkey, who jails journalists, helps Iran go around international sanctions and who helps terrorists, including in Gaza, kill innocent people,” Netanyahu said.

Macron told Netanyahu that he needed to make gestures to the Palestinians to break the impasse between the two sides.

“I asked Prime Minister Netanyahu to make some courageous gestures towards the Palestinians to get out of the current impasse,” Macron said, suggesting that a freeze of construction in settlements could be a first step.

Most countries consider East Jerusalem, which Israel annexed after capturing it in a 1967 war, to be occupied territory and say the status of the city should be decided at future Israeli-Palestinian talks. Israel says that all of Jerusalem is its capital, while Palestinians want East Jerusalem as the capital of a future independent state.

The Trump administration has said it is still committed to reviving Palestinian-Israeli talks that collapsed in 2014, but jettisoning old policies is necessary to break the deadlock.

Washington says it has not taken a position on Jerusalem’s final status or borders, but it is sensible to recognize that any future peace deal will have Israel’s capital in the city.

The United States was “as committed to the peace process as we’ve ever been”, U.S. Ambassador to the United Nations Nikki Haley said on Sunday. Trump “didn’t talk about boundaries, he didn’t talk about borders… Because the final status of Jerusalem is between the Palestinians and the Israelis. It’s not for the Americans to decide.”

“It’s unfortunate that the Palestinian Authority is walking away again from an opportunity to discuss the future of the region,” said Jarrod Agen, a spokesman for Pence.

Netanyahu reacted to critics in a statement before talks with Macron, to be followed by a meeting with European foreign ministers in Brussels on Monday.

“I hear (from Europe) voices of condemnation over President Trump’s historic announcement, but I have not heard any condemnation for the rocket firing against Israel that has come (after the announcement) and the awful incitement against us,” Netanyahu said. 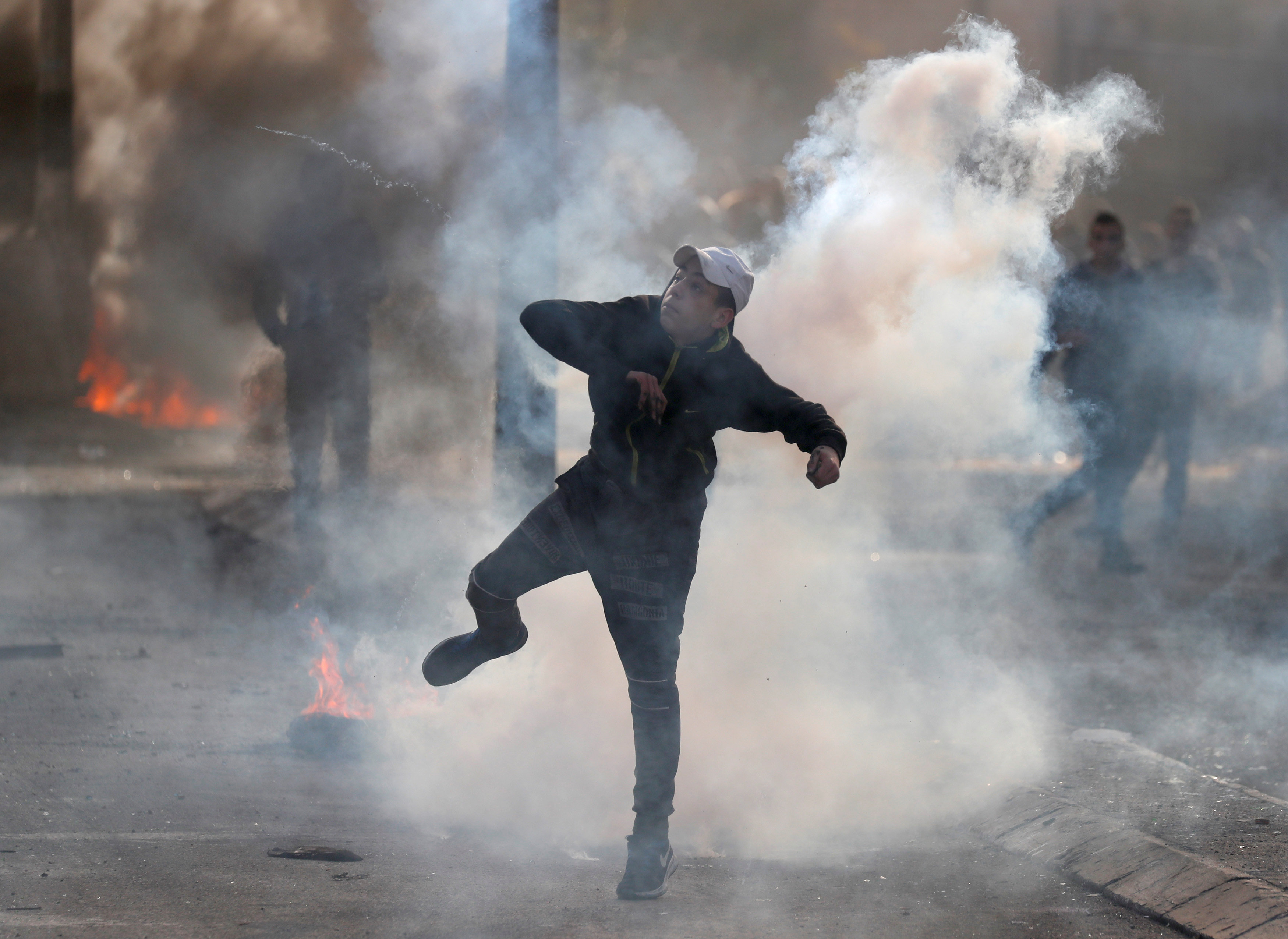 A Palestinian protester throws back a gas canister fired by Israeli forces during a protest in the West Bank city of Bethlehem, December 10, 2017. REUTERS/Goran Tomasevic

In Beirut, Lebanese security forces fired tear gas and water cannons at protesters, some of them waving Palestinian flags, near the U.S. Embassy.

Demonstrators set fires in the street, torched U.S. and Israeli flags and threw projectiles towards security forces that had barricaded the main road to the complex.

In the Moroccan capital, Rabat, tens of thousands of protesters marched down the city’s main thoroughfare chanting slogans including, “The people want to liberate Palestine” and “Death to Israel, enemy of the people and provoker of wars.”

Waving Palestinian flags and holding up pictures of Jerusalem, they expressed anger at the “betrayal” by Arab governments perceived to have backed Trump’s move.

In the Indonesian capital Jakarta, thousands protested outside the U.S. embassy, many waving banners saying “Palestine is in our hearts”.

Maliki has said the Palestinians will be looking for a new peace talks broker instead of the United States and would seek a United Nations Security Council resolution over Trump’s decision.

Arab foreign ministers who met in Cairo on Saturday urged the United States to abandon its decision on Jerusalem and said the move would spur violence throughout the region.

Echoing that view, Abu Dhabi Crown Prince Sheikh Mohammed bin Zayed al-Nahayan, the de facto leader of the United Arab Emirates, said the U.S. move “could throw a lifebuoy to terrorist and armed groups, which have begun to lose ground” in the Middle East.

Along Israel’s tense frontier with the Gaza Strip, the Israeli military on Sunday destroyed what it described as a “significant” cross-border attack tunnel dug by the enclave’s dominant Islamist group, Hamas.

There was no immediate comment from Hamas on the demolition, which came as Palestinian factions tried to meet Sunday’s deadline for an Egyptian-mediated handover of Gaza by Hamas to Western-backed President Abbas after a decade’s schism.

Pre-dawn Israeli airstrikes in the Gaza Strip on Saturday killed two Palestinian gunmen after militants fired rockets from the area into Israel on Friday.