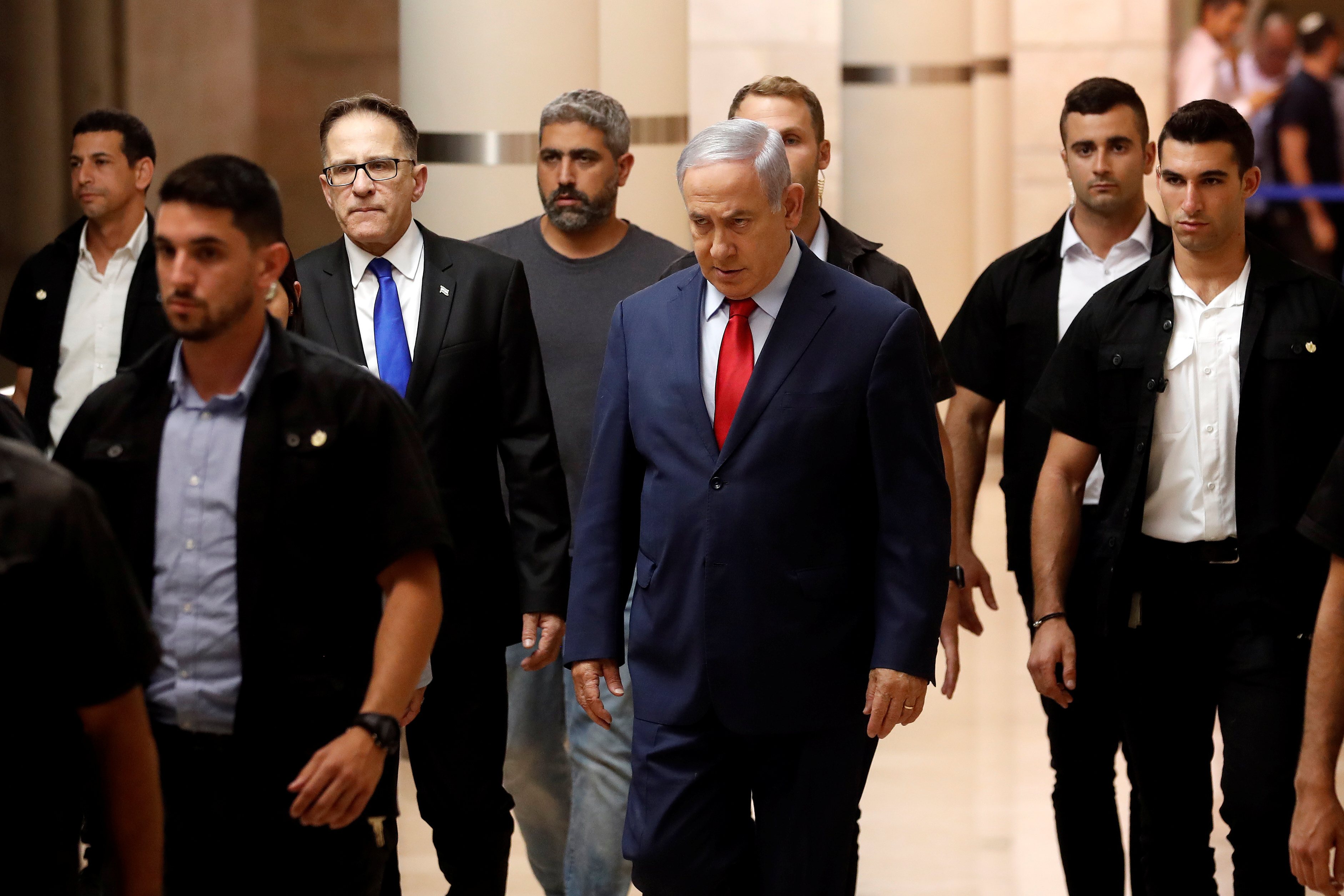 JERUSALEM (Reuters) – Israeli lawmakers voted early Thursday to dissolve parliament and set the country on the path to a second election within months after right-wing Prime Minister Benjamin Netanyahu failed to put together a ruling coalition before a midnight deadline.

In April Netanyahu appeared set for a fifth term after his Likud Party won 35 of the Knesset’s 120 seats, even though he faces possible indictment in three corruption cases. He has denied any wrongdoing and accused his opponents of mounting a witch-hunt.

But despite weeks of negotiations he failed to overcome divisions between secular and religious allies and in the early hours of Thursday, parliament voted by 74-45 to dissolve itself. Another election could be held in September. 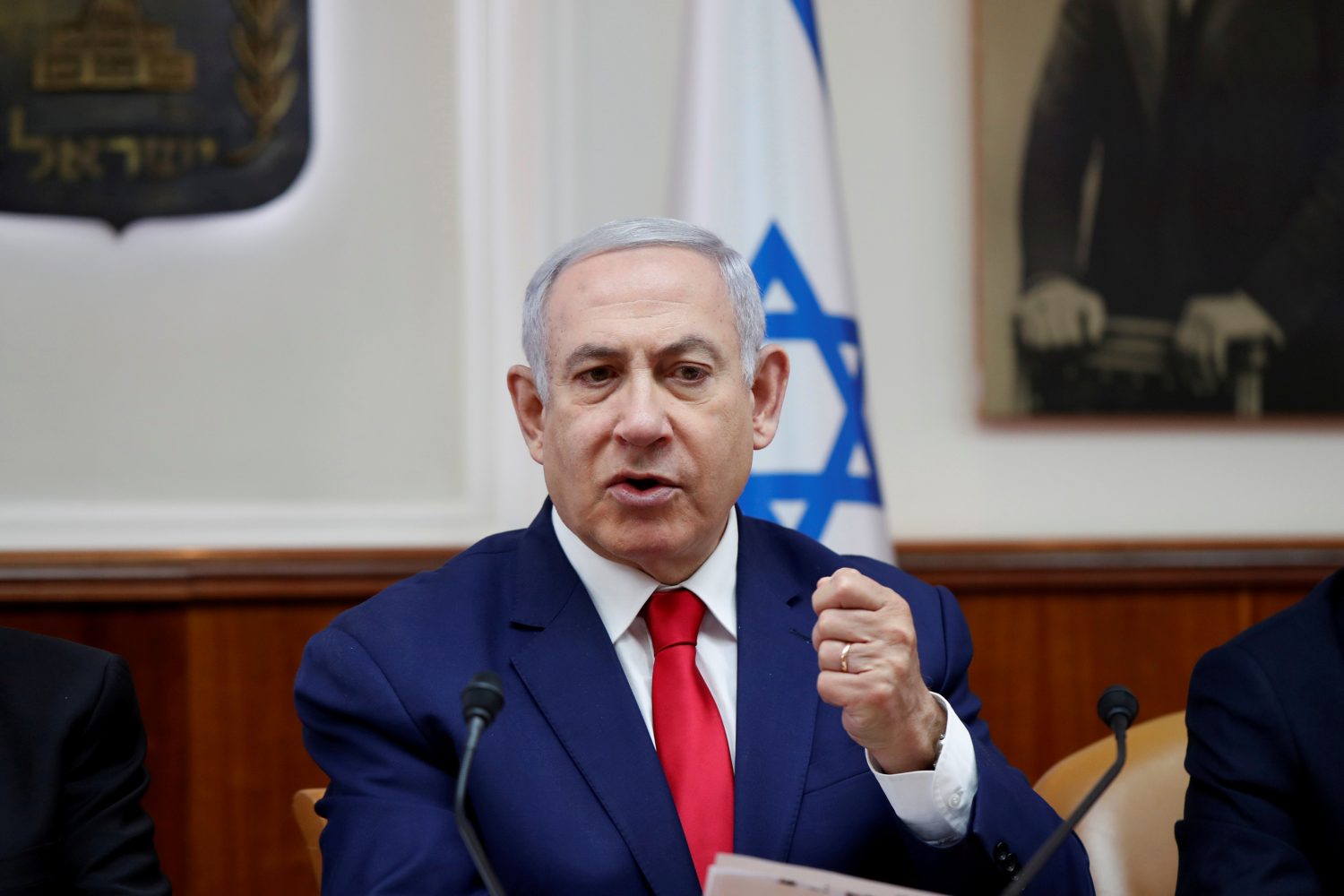 JERUSALEM (Reuters) – Israel’s president said on Tuesday a majority of parliament members had advised him to have Prime Minister Benjamin Netanyahu form a government after the April 9 election, effectively ensuring his nomination.

In office for the past decade, Netanyahu won a fifth term despite an announcement by Attorney General Avichai Mandelblit’s in February that he intends to charge the prime minister in three corruption cases. Netanyahu has denied wrongdoing.

Under law, President Reuven Rivlin chooses a party leader whom he judges has the best prospect of putting together a ruling coalition. He will announce his candidate on Wednesday.

In broadcast remarks on Tuesday, the second day of Rivlin’s public consultations with political parties on their preferences for prime minister, he said Netanyahu “now has a majority of Knesset members” behind him.

“Any room I had for maneuver has effectively been removed at this moment,” the president said.

Netanyahu’s nomination had been a foregone conclusion after his right-wing Likud party captured the largest number of seats in the Knesset in last week’s ballot and his closest rival, centrist Benny Gantz, conceded defeat.

Netanyahu has said he intends to build a coalition with five far-right, right-wing and ultra-Orthodox Jewish parties that would give the Likud-led government 65 seats, four more than the outgoing administration he heads.

Representatives of all of those parties told Rivlin at the meetings, broadcast live on the Internet, that they recommended Netanyahu get the nod.

Gantz, a former military chief of staff whose Blue and White party won 35 parliamentary seats, would likely be next in line to try to assemble a government if Netanyahu fails to do so within 42 days of being chosen by Rivlin.

Netanyahu is under no legal obligation to resign if indicted. He can still argue, at a pre-trial hearing with Mandelblit whose date has not been set, against the formal filing of bribery and fraud charges against him.

The Israeli leader, whose supporters hail his tough security policies and international outreach, is set to become the country’s longest-serving prime minister in July. 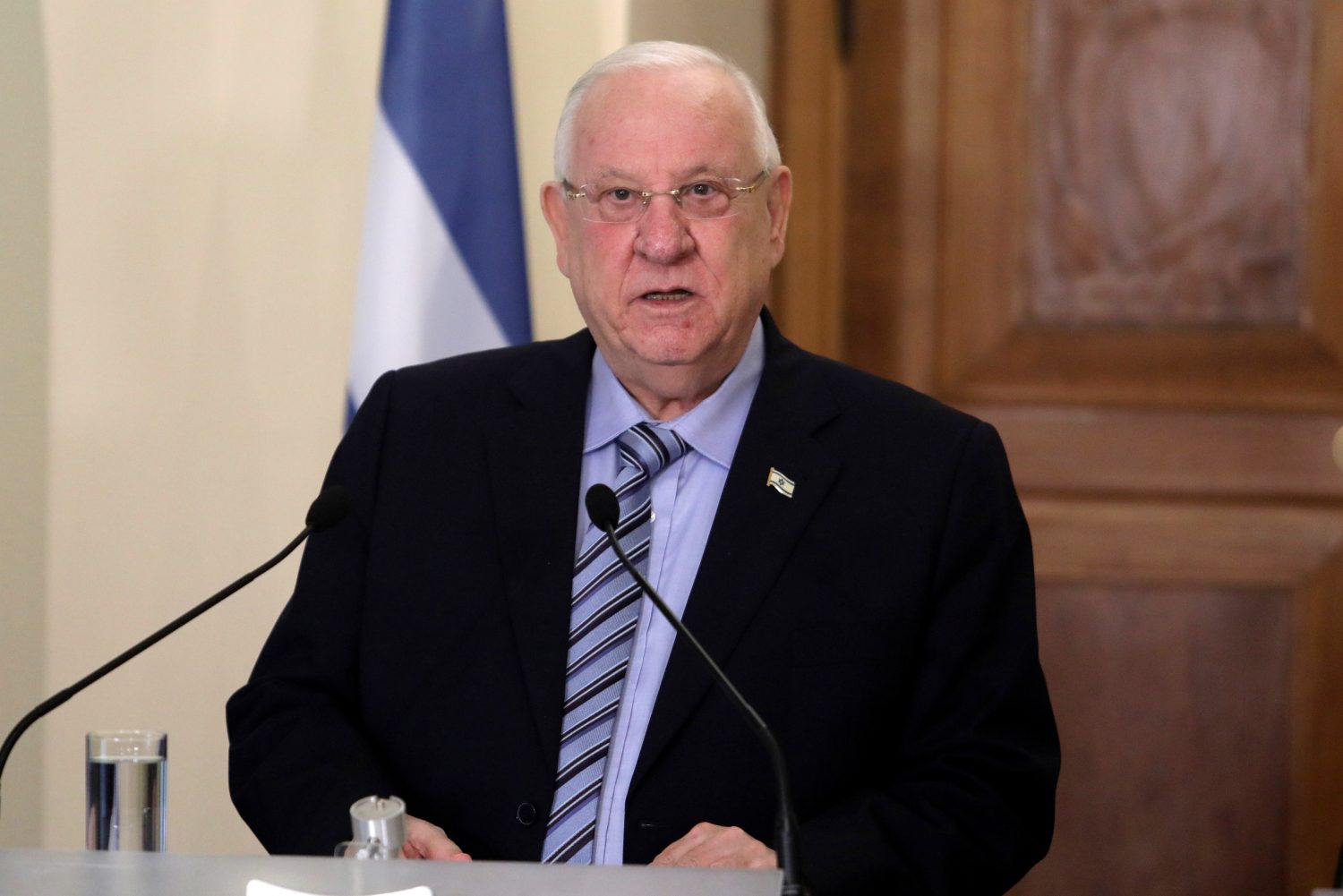 JERUSALEM (Reuters) – Israel’s president began post-election consultations on Monday with political parties that will lead to his appointment of a candidate to form a government.

President Reuven Rivlin said he would announce his choice on Wednesday after meeting with all of the parties that captured seats in the 120-member Knesset.

Under Israeli law, after consultations with the parties the president taps a legislator whom he believes has the best chance of forming a government, delegating 28 days, with a two-week extension if necessary, to complete the task.

Netanyahu said he intends to build a coalition with five far-right, right-wing and ultra-Orthodox Jewish parties that would give a Likud-led government 65 seats, four more than the outgoing administration he heads.

All of those parties have now said they will back Netanyahu, with the last to hold out, former Defence Minister Avigdor Lieberman of the ultranationalist Yisrael Beitenu party, pledging support late on Monday.

“The country has decided and we need to honour the decision,” Lieberman said in a speech to party supporters. “Tomorrow at the president’s, we will recommend Benjamin Netanyahu as the candidate to form the government.”

Gantz, a former military chief of staff whose party won 35 parliamentary seats, would likely be next in line to try to put together a government if Netanyahu fails.

For the first time, Rivlin’s consultations with the parties were being broadcast live as part of what he described as a display of transparency in what has historically been a closed-door process in Israel.

At the meeting with Likud representatives, Culture Minister Miri Regev noted Netanyahu had won re-election despite Attorney General Avichai Mandelblit’s announcement in February that he plans to charge the prime minister in three graft cases.

Netanyahu has denied any wrongdoing. He can still argue, at a pre-trial hearing with Mandelblit whose date has not been set, against the filing of bribery and fraud charges against him.

The Israeli leader is under no legal obligation to resign if indicted. 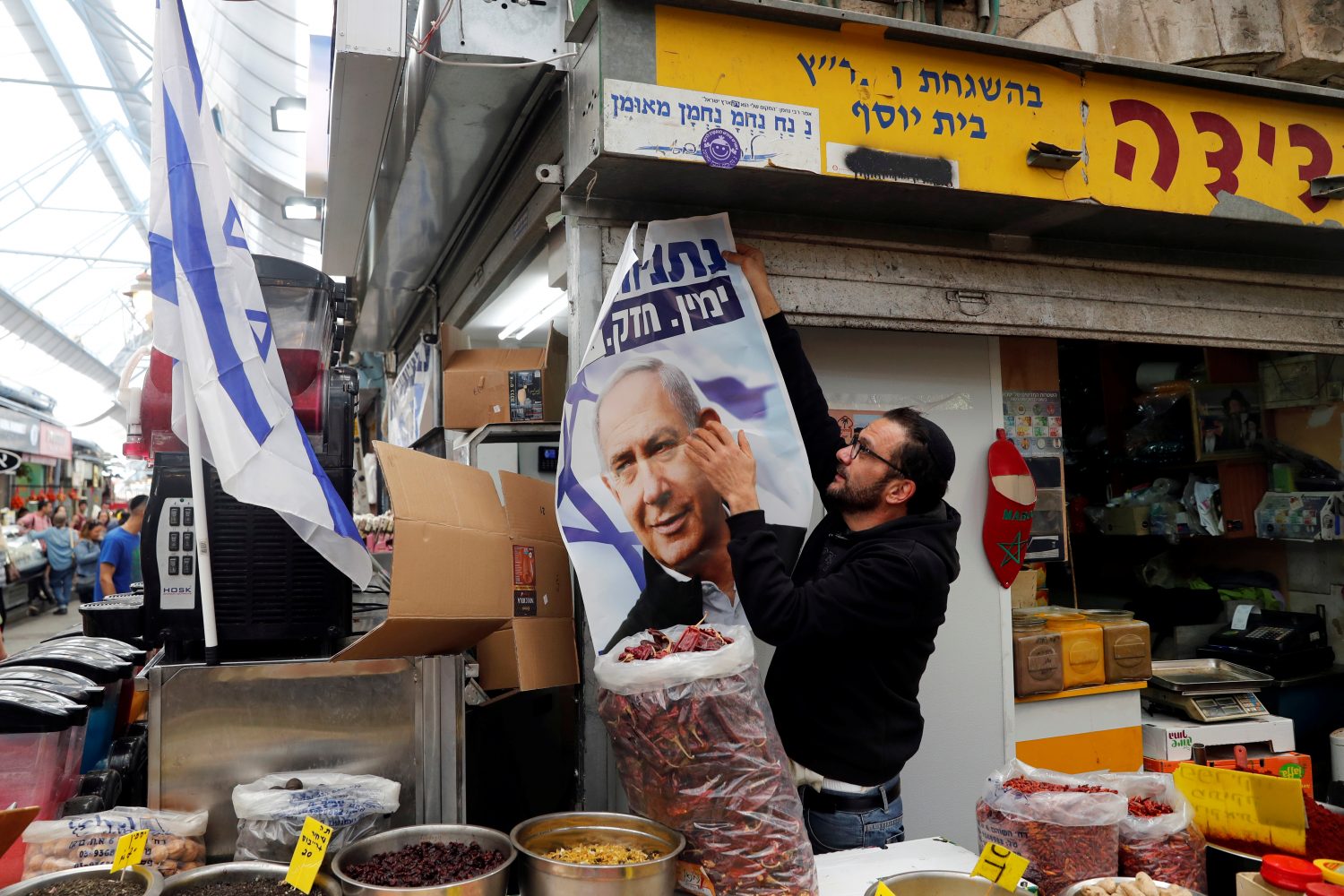 JERUSALEM (Reuters) – Israelis vote in a parliamentary election on Tuesday, choosing among party lists of candidates to serve in the 120-seat Knesset.

No party has won a majority of seats since Israel’s first election in 1949. Following are questions and answers about the vote and what sort of coalition negotiations could emerge:

WHAT HAPPENS AFTER POLLS CLOSE?

Israel’s major television stations and news websites issue exit polls when voting ends at 10 p.m. (1900 GMT) on Tuesday, estimating how many parliamentary seats each party has won, and then the coalition calculations begin.

WHO’S AHEAD IN OPINION POLLS?

Final polls in the campaign, on Friday, showed that Prime Minister Benjamin Netanyahu had fallen behind his main challenger, centrist Benny Gantz, but still has an easier path to form a government that would keep him in power for a record fifth term.

HOW DOES COALITION-BUILDING WORK?

Israel’s president, Reuven Rivlin, consults with the leaders of every party represented in parliament as to their preference for prime minister, and then chooses the legislator who he believes has the best chance of putting together a coalition. The nominee, who does not necessarily have to be the head of the party that won the most votes, has up to 42 days to form a government before the president asks another politician to try.

WHAT SORT OF COALITION COULD BE FORMED?

Netanyahu will likely seek a coalition, similar to his current government, with ultranationalist and Jewish Orthodox parties. Gantz, who heads the centrist Blue and White Party, will likely win the support of center-left and left-wing parties, but polls predict he will fall short of a governing majority in parliament. 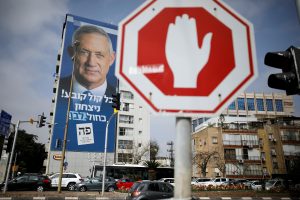 WHAT ARE THE UNEXPECTED FACTORS TO WATCH?

A far-right politician, Moshe Feiglin, has been drawing unexpectedly strong support, opinion polls show, with a libertarian platform advocating the legalization of marijuana, free-market policies and annexation of the occupied West Bank. He could be a kingmaker.

In Israeli politics, a “unity government” can never be ruled out if the path to a right- or center-left-led coalition proves difficult – even though Gantz has pledged not to serve with Netanyahu, citing corruption allegations against the Likud party leader, who has denied those accusations. 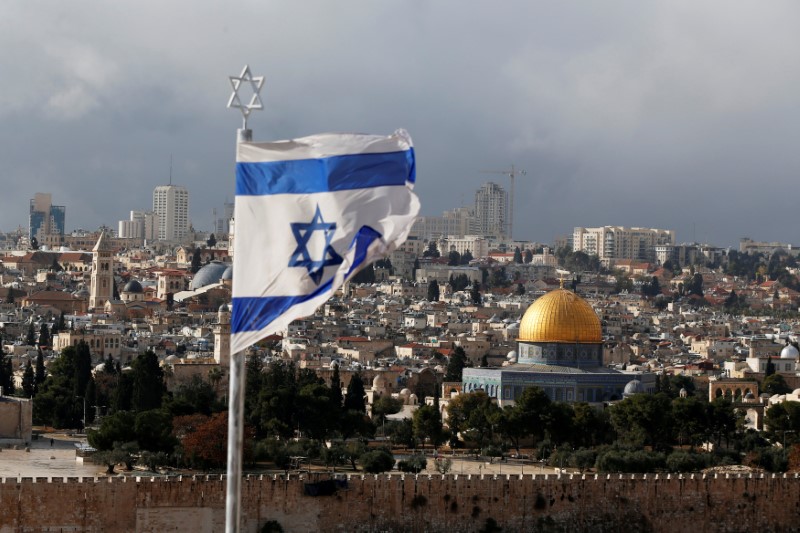 JERUSALEM (Reuters) – Israel’s parliament passed an amendment on Tuesday that would make it harder for it to cede control over parts of Jerusalem in any peace deal with the Palestinians, who condemned the move as undermining any chance to revive talks on statehood.

The legislation, sponsored by the far-right Jewish Home coalition party, raises to 80 from 61 the number of votes required in the 120-seat Knesset to approve any proposal to hand over part of the city to “a foreign party”.

As home to major Muslim, Jewish and Christian holy sites, Jerusalem’s status is one of the most sensitive issues in the decades-old Israeli-Palestinian conflict. Trump’s Dec. 6 decision sparked regional protests and prompted the Palestinians to rule out Washington as a peace broker in any future talks.

Nabil Abu Rdainah, a spokesman for Palestinian President Mahmoud Abbas, described Trump’s policy shift on Jerusalem and the passage of the amendment as “a declaration of war against the Palestinian people”.

“The vote clearly shows that the Israeli side has officially declared an end to the so-called political process,” Abu Rdainah said, referring to U.S.-sponsored talks on Palestinian statehood that collapsed in 2014.

Israel captured East Jerusalem in the 1967 Middle East war and annexed it in a move not recognized internationally. It says the entire city is its “eternal and indivisible” capital.

Palestinians seek to make East Jerusalem the capital of a state they seek to establish in the occupied West Bank and in the Gaza Strip.

The amendment, long in the legislative pipeline, was passed with 64 lawmakers voting in favor and 52 against.

“There will be no more political skulduggery that will allow our capital to be torn apart,” Bennett said on Twitter.

A bid to revive Israeli-Palestinian negotiations led by the president’s adviser and son-in-law, Jared Kushner, has so far shown no progress.

Political commentators said Likud’s decision might bolster right-wing support for Netanyahu, who could seek a public mandate in an early election while he awaits possible criminal indictments against him on corruption suspicions. He denies wrongdoing.

Parliamentary elections are not due until November 2019 but the police investigations in two cases of alleged corruption against Netanyahu and tensions among coalition partners in his government could hasten a poll.

Some commentators, pointing to an existing law that already sets a similar high threshold for handing over territory in a land-for-peace deal, have said Jewish Home was essentially competing with Likud for support among the right-wing base.

(This version of the story refiles to remove extraneous word in paragraph 14.)