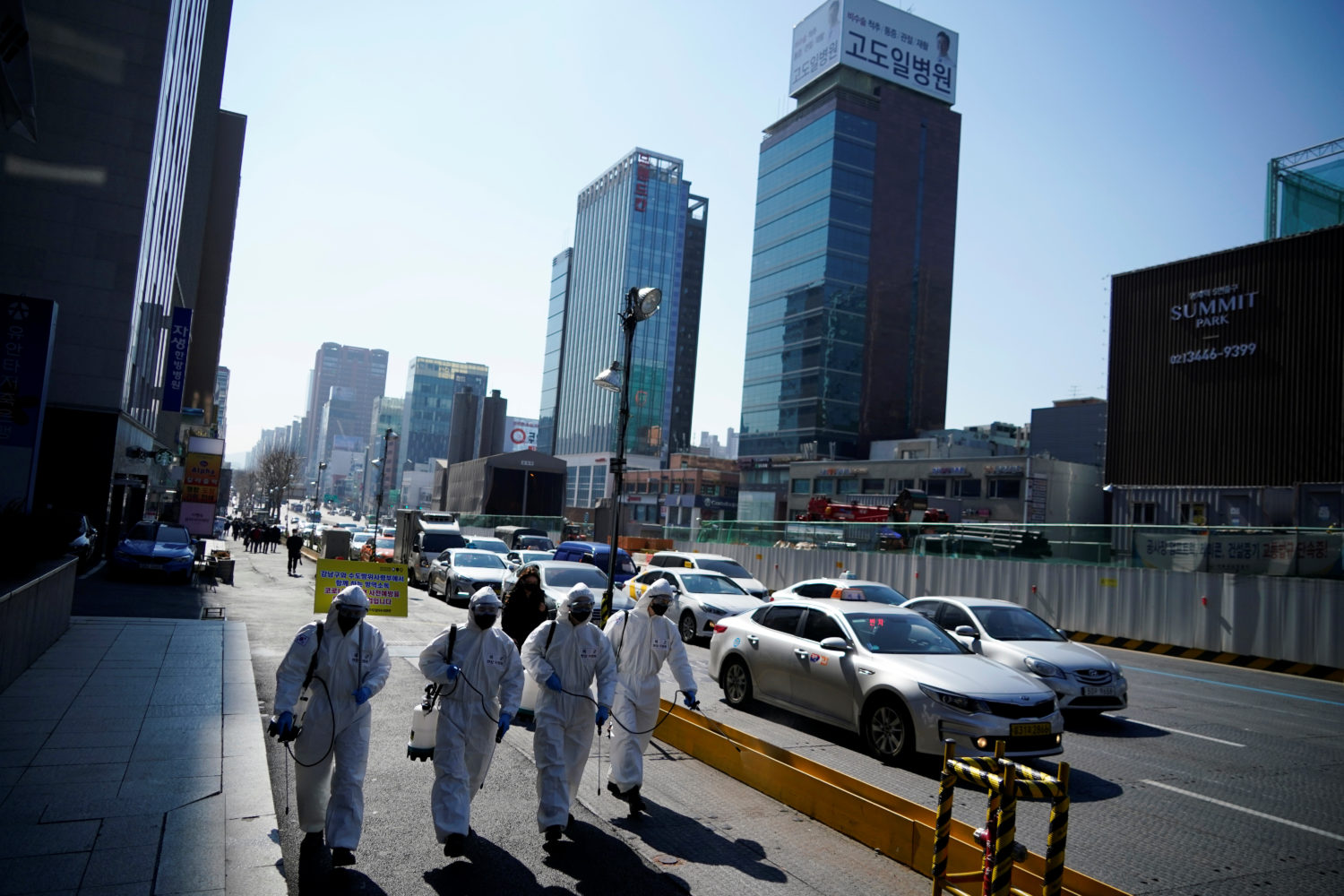 By Hyonhee Shin and Josh Smith

SEOUL (Reuters) – South Korea declared a “special care zone” on Thursday around a second city hit hard by the coronavirus and the U.S. military confirmed two new cases among relatives of its troops in the country, which is battling the biggest outbreak outside China.

Australia and Japan have joined the list of almost 100 nations now limiting arrivals of people from South Korea, which reported 760 coronavirus cases on Thursday for a total of 6,088.

Japanese Prime Minister Shinzo Abe said Japan will suspend existing visas for visitors from China and South Korea and quarantine them for two weeks in response to the widening outbreak of the flu-like virus.

The measures will go into effect on March 9.

The South Korean government declared a “special care zone” around Gyeongsan, a city of about 275,000 people 250 km (150 miles) southeast of Seoul, promising extra resources such as face masks.

Gyeongsan has seen a spike in cases in recent days, many of them linked to a fringe Christian group at the center of South Korea’s outbreak. Similar zones have been declared around the neighboring city of Daegu and Cheongdo County.

About 75% of all cases in South Korea are in and around Daegu, its fourth-largest city, according to the Korea Centers for Disease Control and Prevention (KCDC).

“Every day is sad and tough like a war. But our Daegu citizens are showing surprise wisdom and courage,” Daegu Mayor Kwon Young-jin told reporters on Thursday.

About 2,120 patients were waiting for hospital beds in Daegu, city officials said. Dozens of newly commissioned military nurses were due to begin work in the city on Thursday, according to the health ministry.

The KCDC reported five more deaths from the virus, bringing the total to 37. The virus surfaced in China late last year and has infected more than 95,300 people and killed almost 3,300 worldwide, mostly in China, according to a Reuters tally.

South Korea also said it was banning the export of face masks, and would step up their production and ration them to limit individual purchases to two a week, in an attempt to ease shortages and curb hoarding.

People have flocked to supermarkets, pharmacies and online distributors to snap up masks and other supplies, with hundreds lining up at some stores every morning.

KCDC Deputy Director Kwon Jun-wook advised all South Koreans to stay home and avoid “any gatherings, especially those that take place in enclosed places with many people such as religious events”.

Despite the new cases, USFK had resumed sending troops to bases in Daegu and surrounding areas, according to the military newspaper Stars and Stripes.

It said commanders believed the bases were protected from the outside population, and troop rotations were needed to maintain readiness in the face of threats from nuclear-armed North Korea.

Australia’s ban on the arrival of foreigners from South Korea is a blow to Seoul’s efforts to prevent the United States from imposing such restrictions.

“It is a deeply regrettable step, and we will closely consult Australian authorities for a swift revocation of the measure and to minimize inconvenience for our citizens,” Foreign Ministry spokesman Kim In-chul told reporters.

South Korean officials met the U.S. ambassador in Seoul on Wednesday to urge the United States not to limit travel. Similar talks would be held on Friday with diplomats from other nations, the Foreign Ministry said.

According to the U.S. State Department, anyone with a fever of 100.4 Fahrenheit (38 Celsius) is already banned from boarding direct flights from South Korea to the United States.

Korean Air Lines said it would screen all departing passengers for high temperatures and reject those deemed a risk. 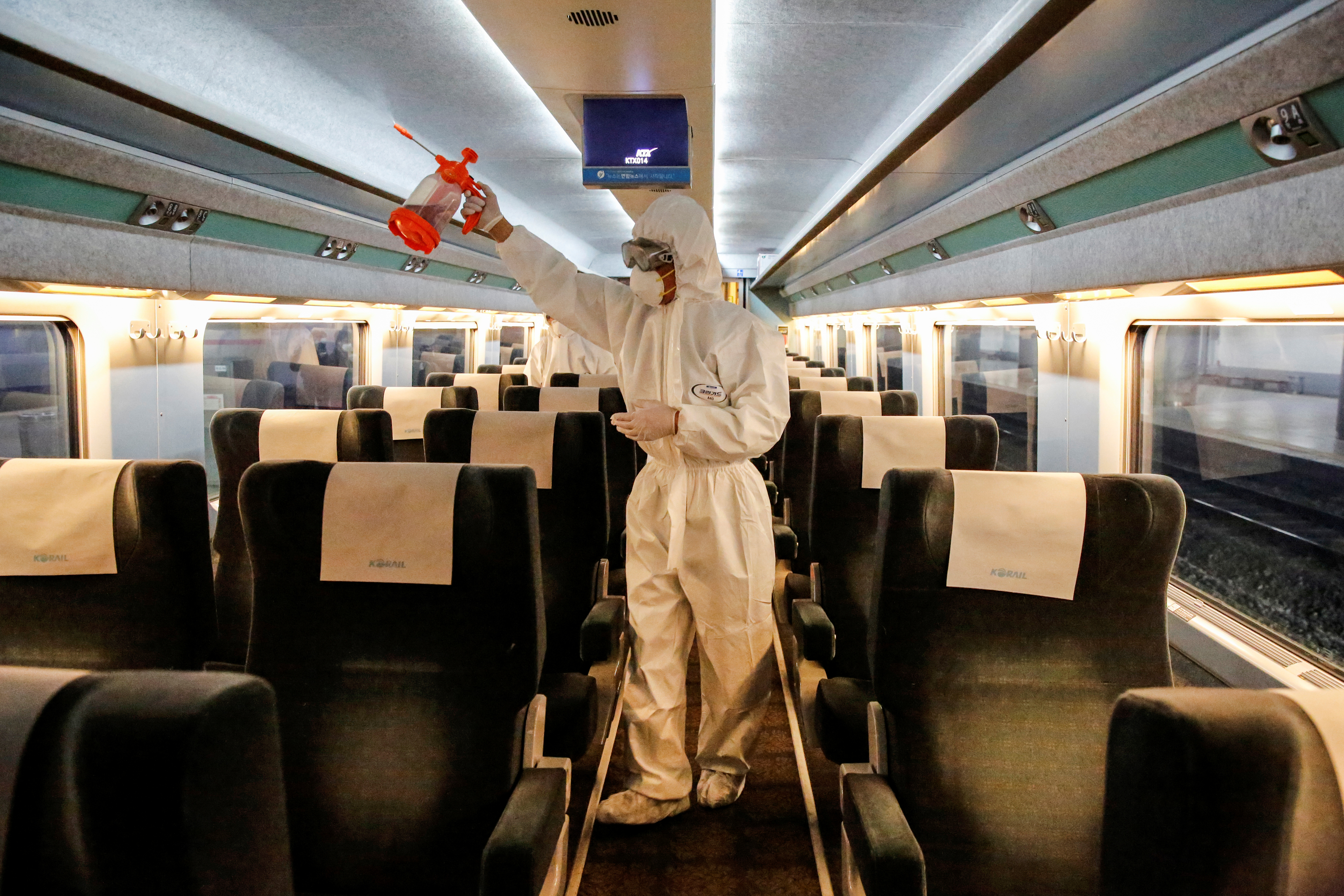 SEOUL (Reuters) – South Korea reported hundreds of new coronavirus cases on Wednesday as many sick people waited for hospital beds in Daegu, the city at the center of the worst outbreak outside China.

The new cases bring South Korea’s total to 5,621, with at least 32 deaths, the Korea Centers for Disease Control and Prevention (KCDC) said.

Most cases were in and around Daegu, the country’s fourth-largest city, where the flu-like virus has spread rapidly through members of a fringe Christian group.

Health officials expect the number of new cases to be high for the near future as they complete the testing of more than 200,000 members of the sect, as well as thousands of other suspected cases from smaller clusters.

“In order to overcome COVID-19 as quickly as possible and minimize the impact on the economy, it is necessary to proactively inject all available resources.”

COVID-19 is the illness caused by the new coronavirus which emerged from China late last year to spread around the world.

Hospitals in South Korea’s hardest hit areas were scrambling to accommodate the surge in new patients.

In Daegu, 2,300 people were waiting to be admitted to hospitals and temporary medical facilities, Vice Health Minister Kim Gang-lip said. A 100-bed military hospital that had been handling many of the most serious cases was due to have 200 additional beds available by Thursday, he added.

Moon’s office on Wednesday said he had canceled a planned trip to the United Arab Emirates, Egypt and Turkey in mid-March due to the crisis.

At least 92 countries have imposed some form of entry restrictions on arrivals from South Korea, according to a tally by Yonhap news agency.

In the meeting, Cho outlined South Korea’s efforts to control the outbreak and urged the United States not to take steps that would affect exchanges between the two countries, the foreign ministry said.

U.S. President Donald Trump said this week his administration was watching Italy, South Korea and Japan – all with severe outbreaks – and would make a decision about travel restrictions “at the right time”.

“We remain confident in the South Korean government’s robust and comprehensive response efforts to limit the spread of the virus,” U.S. ambassador Harry Harris tweeted after meeting Cho.

Up to 10,000 people are being tested each day in South Korea, and daily totals have decreased slightly since a peak of 909 new cases on Saturday, the KCDC said.

Experts caution that the results of those tests could take some time to be processed, leading to future spikes in confirmed cases.