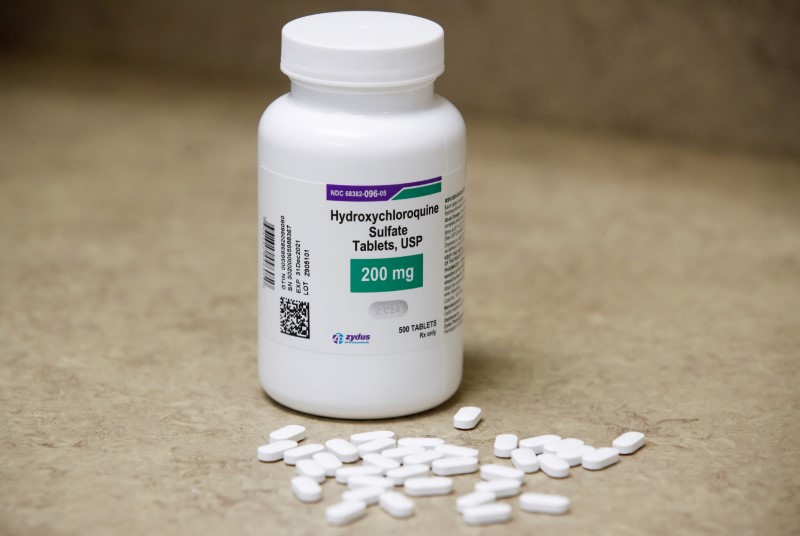 NEW YORK (Reuters) – British medical journal the Lancet on Tuesday said it had concerns about data behind an influential article that found hydroxychloroquine increased the risk of death in COVID-19 patients, a conclusion that undercut scientific interest in the medicine championed by U.S. President Donald Trump.

Hydroxychloroquine – which has anti-inflammatory and antiviral properties – inhibited the coronavirus in laboratory experiments but has not been proven effective in humans, particularly in placebo-controlled, randomized clinical trials considered the gold standard for data.

The debate has become highly politicized, and many scientists have voiced concern.

Nearly 150 doctors signed an open letter to the Lancet last week calling the article’s conclusions into question and asking to make public the peer review comments that preceded publication.

“This is not some sideshow or minor issue,” said Dr. Walid Gellad, a professor at University of Pittsburgh’s medical school, who was not a signatory of the letter but has been critical of the study.

“We’re in an unprecedented pandemic. We’ve organized these enormous clinical trials to figure out if something works. And this study stopped or paused a couple of those trials, and changed the narrative around a drug that no one knows if it works or not,” he said.

The observational study published in the Lancet on May 22 looked at 96,000 hospitalized COVID-19 patients, some treated with the decades-old malaria drug that Trump said he took and has urged others to use.

Several clinical trials were put on hold after the study was published.

The study, using data provided by healthcare data analytics firm Surgisphere, was not a traditional clinical trial that would have compared hydroxychloroquine to a placebo or other medicine.

The Lancet’s editors said in a note that serious scientific questions about the study were brought to their attention and an independent audit of the data has already been commissioned.

Surgisphere said in a statement that the audit “will bring further transparency to our work (and) further highlight the quality of our work.”

Earlier on Tuesday, the New England Journal of Medicine (NEJM) said it was concerned about the quality of the data behind a different study it published in May that also used data from Surgisphere and had the same lead author.

Dr. Mandeep Mehra, the lead author and a professor of Medicine at Harvard Medical School, defended the use of the Surgisphere dataset as an intermediary step until clinical data is available.

“I eagerly await word from the independent audits, the results of which will inform any further action,” Mehra said in a statement after the Lancet note.

Among the critics of the study to sign the letter last week were several academics from the University of Oxford and Mahidol Oxford Tropical Medicine Research Unit (MORU) in Bangkok, which had been conducting the global “COPCOV” trial of hydroxychloroquine as a treatment of COVID-19.

The trial was paused last week, after the Lancet article.

In March, Trump, with little scientific evidence, said hydroxychloroquine used in combination with the antibiotic azithromycin had “a real chance to be one of the biggest game-changers in the history of medicine.” He later said he took the drugs preventively after two people who worked at the White House were diagnosed with COVID-19.

Trump and Brazilian President Jair Bolsonaro discussed a joint research effort on using hydroxychloroquine as both a prophylaxis and treatment for the coronavirus, the White House said on Tuesday.