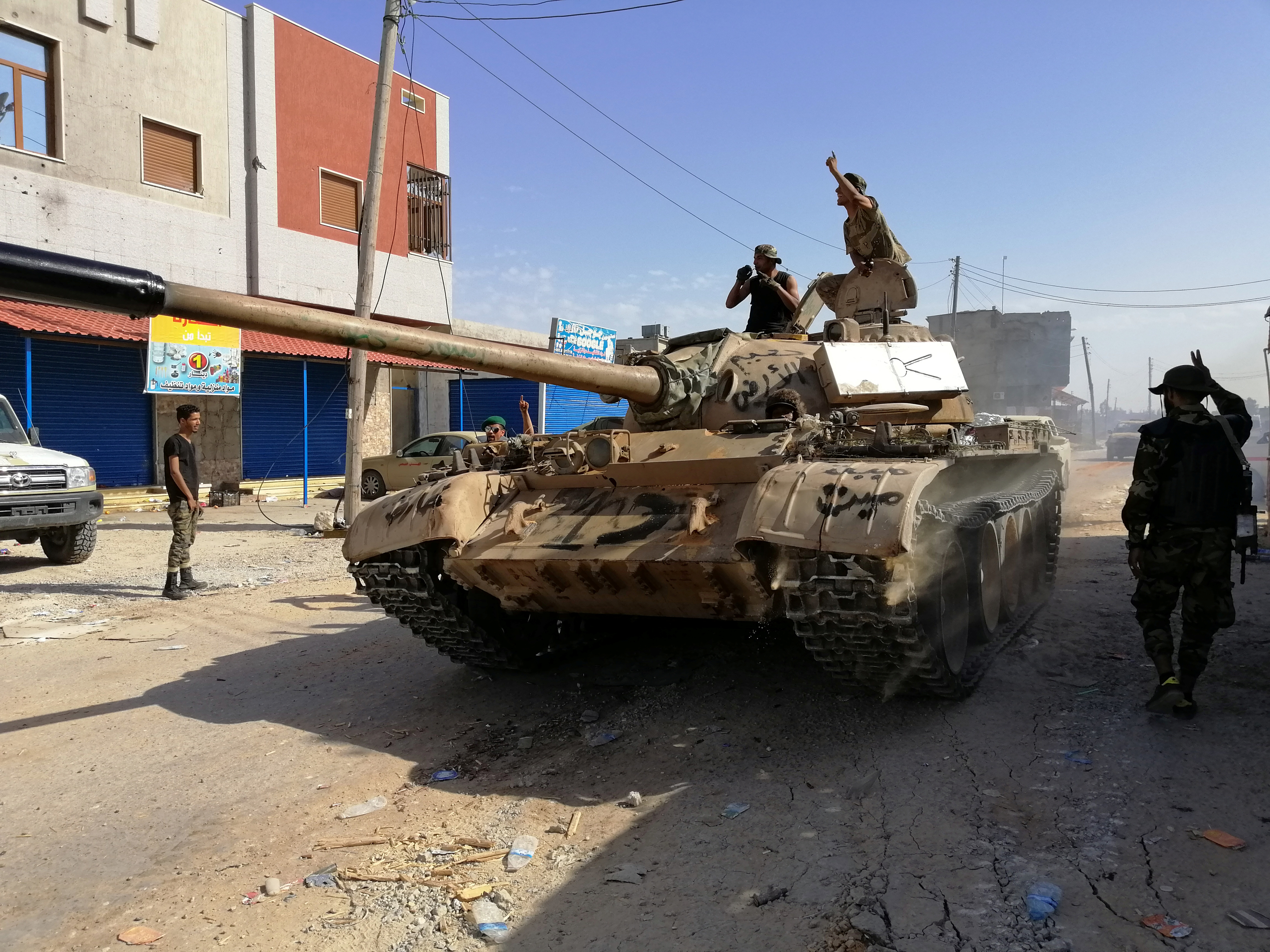 TRIPOLI (Reuters) – Eastern Libyan forces bogged down in street battles in a push to seize the capital Tripoli deployed warplanes on Friday to hit several government positions, as more civilians fled the fighting.

More than 1,000 people gathered in central Tripoli to demand that Khalifa Haftar stop the advance of his Libyan National Army (LNA) on the coastal city of about 1.2 million people.

Haftar launched the campaign a week ago, in the latest conflict in a cycle of anarchy since the 2011 overthrow of dictator Muammar Gaddafi.

But forces loyal to Prime Minister Fayez al-Serraj’s internationally recognized government have so far kept them at bay, with fierce fighting around a disused former airport about 11 km (7 miles) from the center.

On Friday, an LNA warplane bombed the camp of a force allied to Serraj in Zuwara, west of Tripoli toward the Tunisian border, an LNA military source and residents said.

Zuwara is near the Mellitah oil and gas plant, jointly operated by Italy’s ENI and state oil firm NOC, which supplies Italy with gas through the Greenstream pipeline.

An LNA warplane also attacked the only partly-functioning airport in Tripoli, Mitiga, where anti-aircraft opened fire in response, witnesses said. The extent of damage and possible casualties in both places was not clear.

A week of battles has killed 75 people – mainly fighters but also 17 civilians – and wounded another 323, according to latest U.N. tallies. Some 9,500 people have also been forced out of their homes.

As the sound of fighting echoed around their city, residents sought to maintain some normality on Friday.

Some families were eating in cafes next to the fish market where people were stocking up for the weekend.

“We have got used to wars. I fear only in God,” said Yamim Ahmed, 20, who works in a fast food restaurant.

More than 1,000 people staged a protest in Martyrs Square in central Tripoli to demand an end to the offensive, witnesses said. The turnout was bigger than last Friday.

As well as the humanitarian cost, the conflict threatens to disrupt oil supplies, increase migration across the Mediterranean to Europe, scupper a U.N. peace plan, and allow Islamist militants to exploit the chaos.

Haftar, 75, a former general in Gaddafi’s army who later joined the revolt against him, moved his troops out of their eastern stronghold to take the oil-rich, desert south earlier this year, before sweeping up to Tripoli at the start of April.

But Serraj’s government has managed to halt for now the advance, helped by forces with machine-guns on pickups and steel containers across the road into Tripoli. The Tripoli government says it has taken nearly 200 prisoners from Haftar’s forces.

The United Nations, which had hoped to organize a national conference this month bringing the rival eastern and western administrations together to organize an election, has called for a ceasefire. The United States, G7 bloc of wealthy nations and European Union have also urged the LNA to halt its offensive.

The U.N. health agency said it fears outbreaks of tuberculosis, measles and diarrhea due to poor sanitation, especially among those displaced.

The WHO said it had only two weeks of medical supplies available for Tripoli’s hospitals.

Haftar casts himself as a bulwark against Islamist militancy who wants to restore order to Libya. But opponents see him as a potential would-be new dictator like Gaddafi.

He has so far resisted U.N. pressure to accept a power-sharing settlement, using his leverage as an ally of the West in attempts to stem jihadists in North Africa.

About 1,500 refugees and migrants are trapped in detention centers, the head of the U.N. refugee agency said. “They must be urgently brought to safety. Simply put, this is a matter of life or death,” Filippo Grandi said in a statement.

Libya is a major transit point for migrants pouring into Europe in recent years, mostly trafficked by smuggling gangs.