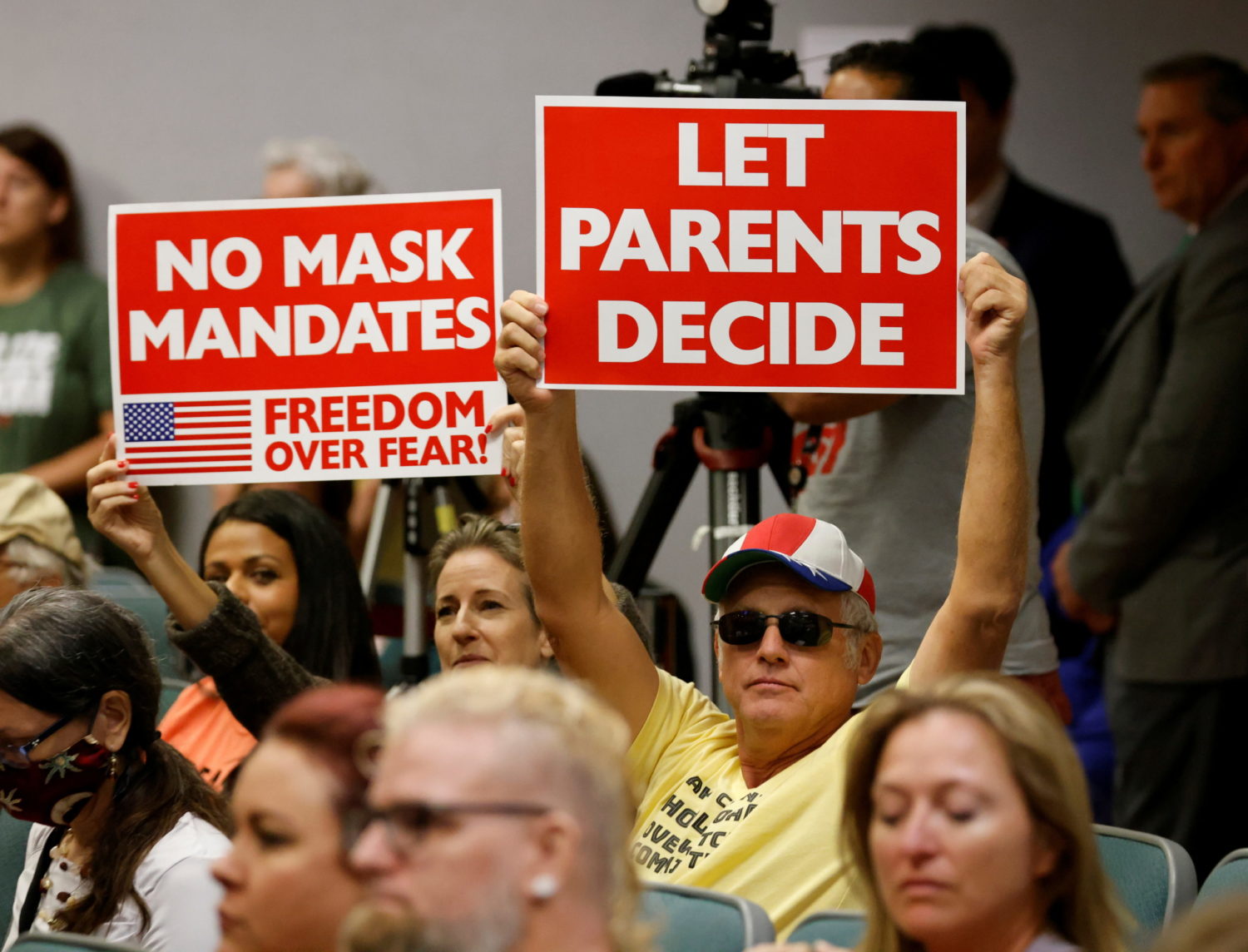 By Saundra Amrhein and James Oliphant

TAVARES, Fla. (Reuters) – In a scene replayed across the United States, angry parents and activists streamed into a meeting of the Florida’s Lake County school board on Thursday where it considered whether to mandate mask-wearing for students and staff due to COVID.

Some opponents of the mask proposal brandished signs that read “Let Our Children Breathe.” Even with Florida seeing a record number of coronavirus cases, one attendee called the pandemic “overblown.” Another was escorted out by deputies after yelling at board members.

The proposal would require staff and students to wear masks for 14 days at schools with COVID positivity rates at or above 5%. But Florida’s Republican governor, Ron DeSantis, effectively banned similar mandates in July.

Since DeSantis’ order, more than a dozen Florida counties have rebelled and voted to require masks to protect students and teachers as the Delta variant sweeps across the state. This week, the state’s Department of Education sanctioned two counties that passed school mask requirements.

The battle between DeSantis and the state’s school systems echoes larger fights across the country. Other Republican-run states such as Arizona and Texas have also banned mask mandates in schools even as COVID cases have soared in their states, as parents and voters are sharply divided over safety measures and personal freedoms.

The pushback in Florida against the Republican governor initially was led by large urban school districts run by Democrats. But this week saw more conservative counties that backed Republican Donald Trump in the 2020 presidential election also defying DeSantis and instituting their own mandates.

A day later, Hernando County, which supported Trump over Biden by almost 30 points, also passed a mandate, but one that allows parents to opt out.

In Lake County near Orlando, which also strongly backed Trump, a school official said on Thursday that more than 1,000 students of the 36,000 in the district had tested positive for the virus.

The board listened to more than three hours of public comment on the mask proposal then postponed a decision. Some 280 people spoke or sent emails on the issue, and two-thirds of them supported the idea, the Orlando Sentinel reported.

Still, proponents of a mask mandate were booed and heckled by the crowd in attendance.

While the conflict centers on whether state or local governments are best equipped to make decisions on health and safety, it also has become a political challenge for DeSantis, whose state has once again become a COVID-19 hotbed.

After being widely praised last year when cases declined and the state’s economy seemed revived, DeSantis has faced renewed criticism for his opposition to masks and employer vaccine mandates. Florida on Aug. 26 saw a single-day record number of new cases of the virus – almost 28,000 – since the pandemic began.

A spokesperson for DeSantis, Christina Pushaw, defended the ban on school mandates, saying the governor is “protecting the rights of families and children from all levels of government overreach.”

At the Brevard County meeting on Monday, Misty Belford, the chair of the school board who a month earlier had opposed a mask mandate, switched her vote and gave proponents a 3-2 majority.

Belford changed her mind, she told Reuters, after watching the district’s caseload spike, including a 49% increase in student cases from one week to the next. One school was closed for two days after most of its students were quarantined.

“We are at an absolute crisis point,” Belford said.

But board member Katye Campbell, who voted against the mandate, said she worries about negative effects on students from requiring masks, such as asthma flare-ups, suicidal ideation and panic attacks.

“There is nothing easy about this decision because our community is so divided,” Campbell said.

Belford said she was relying on a decision from a Florida court last week that declared the DeSantis ban illegal. DeSantis on Thursday appealed the ruling. Earlier this week, the Florida Board of Education said it would penalize two counties that voted for mask mandates without providing a parental opt-out, Alachua and Broward, by withholding funds from the districts for the board members’ salaries.

Leanetta McNealy, chair of the Alachua County school board, said her board voted for the mask mandate last month based on scientific evidence that it would help mitigate the spread of the highly contagious Delta variant.

“I’d rather have a decrease in my compensation than have a death under my watch,” she said.

(Reporting by Saundra Amrhein in Tavares, Florida and James Oliphant in Washington; Editing by Soyoung Kim and Cynthia Osterman)