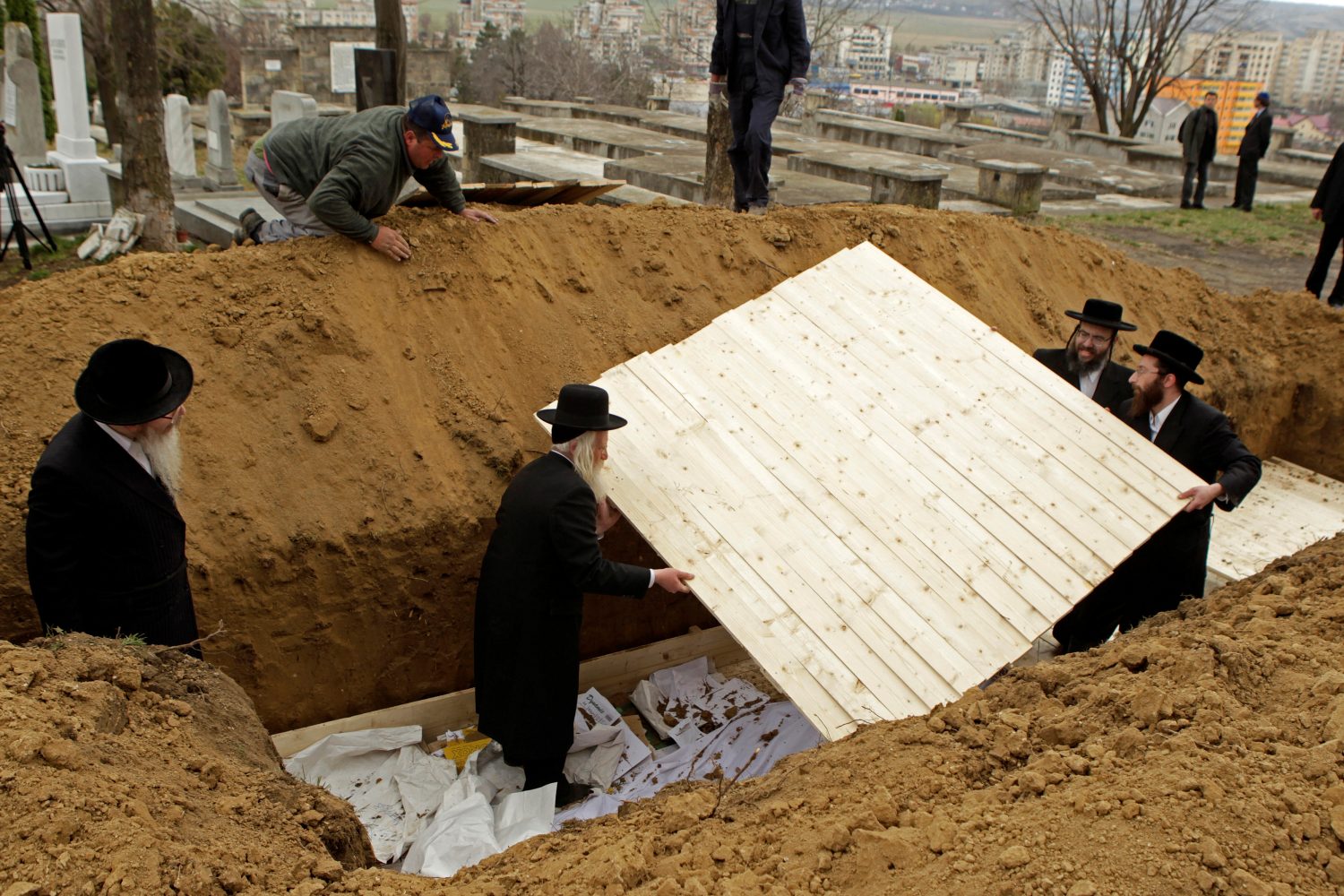 BUCHAREST (Reuters) – Archaeologists have unearthed “many human remains” in northeast Romania near an area where in 2010 they discovered a mass grave for more than 100 Jews killed by Romanian troops during World War Two, military prosecutors said on Tuesday.

The archaeologists, who are supported by the Elie Wiesel Institute and have been scouring the area since 2010 for possible other mass graves, also discovered a grenade and an 82 mm caliber gun mortar at the site.

“Notified by the Elie Wiesel Institute… we launched a criminal probe regarding the June 29 unearthing of many human remains during archaeological research work in the proximity of an area where a mass grave was found in 2010,” the prosecutors said in a statement.

The site has been cordoned off but no further details were immediately available.

The mass grave discovered in 2010 was located in a forested area called Vulturi, some 400 km (250 miles) north of Bucharest, through which Romanian and German troops advanced at the start of their invasion of the Soviet Union in 1941.

An international commission headed by Nobel laureate Wiesel had concluded in 2004 that between 280,000 and 380,000 Romanian and Ukrainian Jews were killed in Romania and areas it controlled during World War Two as an ally of Nazi Germany.

Many of them were slaughtered in pogroms such as the 1941 killing of almost 15,000 Jews in and around the city of Iasi, or died in labor camps, or on death trains.

Wiesel, an American activist, writer and Holocaust survivor, was born in Romania in 1928. His mother and one of his sisters were killed at Auschwitz and his father at Buchenwald. Wiesel won the Nobel Peace Prize in 1986 for his human rights work and died in 2016.

Vulturi was the second place in Romania where a mass grave has been discovered since the war. In 1945, 311 bodies from three mass graves were exhumed in Stanca Roznovanu in Iasi.

Romania has only recently started to come to terms with its role in the extermination of Jews, admitting for the first time in 2003 that it had taken part.

Romania switched sides in the war in 1944 as the Soviet Red Army swept down into the Balkans. The Communist regime which then took power did little to uncover the killings. 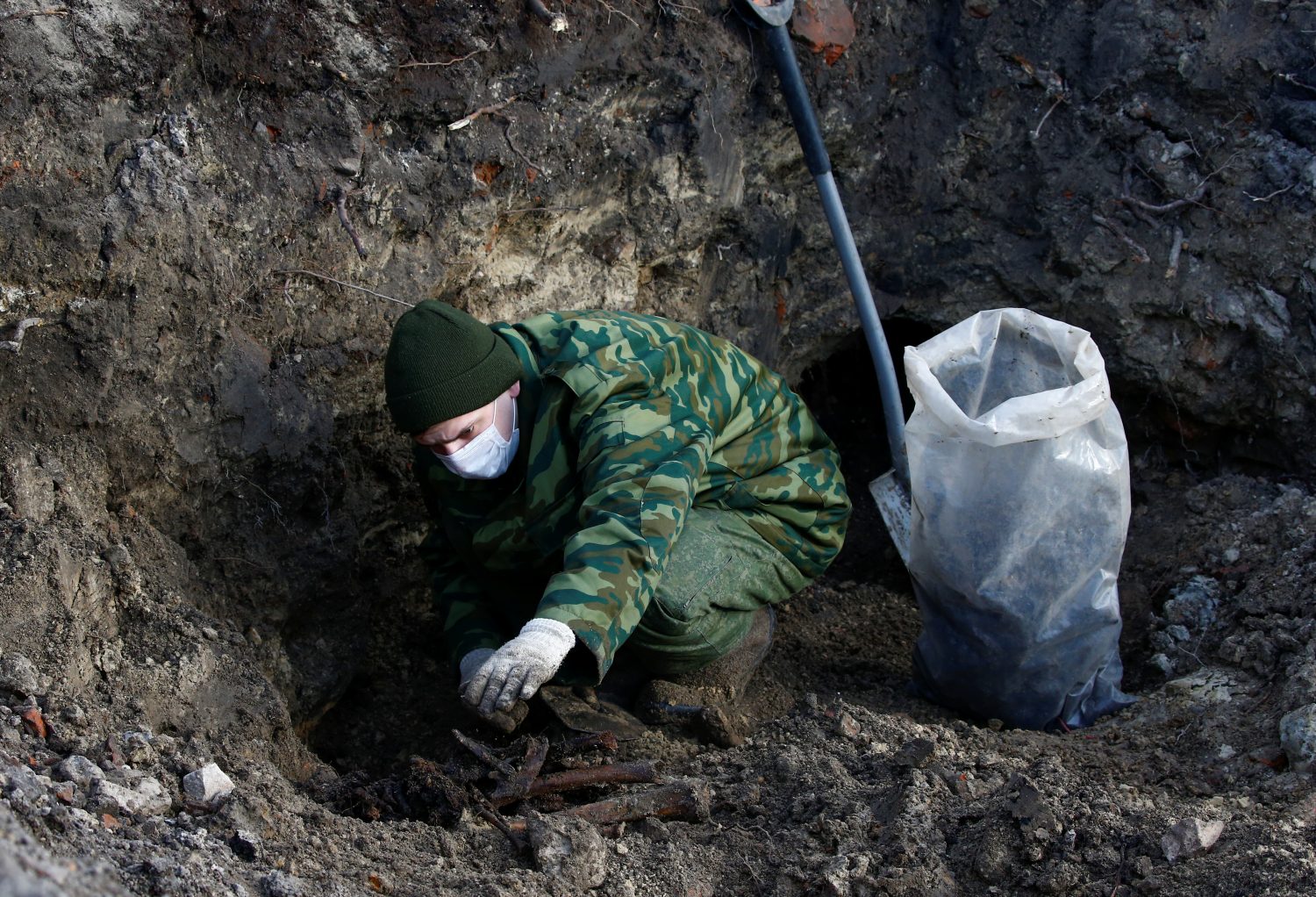 BREST, Belarus (Reuters) – Soldiers in Belarus have unearthed the bones of hundreds of people shot during World War Two from a mass grave discovered at the site of a ghetto where Jews lived under the Nazis.

The grave was uncovered by chance last month on a construction site in a residential area in the center of Brest near the Polish border. 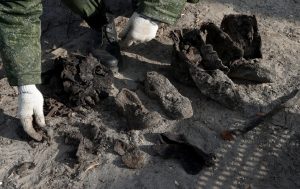 A soldier from a special “search battalion” of Belarus Defence Ministry takes part in the exhumation of a mass grave containing the remains of about 730 prisoners of a former Jewish ghetto, discovered at a construction site in the centre of Brest, Belarus February 26, 2019. REUTERS/Vasily Fedosenko

Soldiers wearing white masks on Tuesday sifted through the site with spades, trowels and their gloved hands to collect the bones. They also found items such as leather shoes that had not rotted.

Dmitry Kaminsky, a soldier leading the unit, said they had exhumed 730 bodies so far, but could not be sure how many more would be found.

“It’s possible they go further under the road. We have to cut open the tarmac road. Then we’ll know,” he said.

Some of the skulls bore bullet holes, he said, suggesting the victims had been executed by a shot to the back of the head.

Belarus, a former Soviet republic, was occupied by Nazi Germany during World War Two and tens of thousands of its Jews were killed by the Nazis.

The site of the mass grave served from December 1941 to October 1942 as part of a ghetto, areas created by the Nazis to segregate Jews and sometimes other minorities from other city dwellers. Brest was part of Poland before the war.

The remains were discovered when builders began to lay the foundations for an apartment block.

Local authorities want to bury the bodies in a ceremony at a cemetery in the north of the city.

“We want to be sure that there are no more mass graves here,” said Alla Kondak, a local culture official. 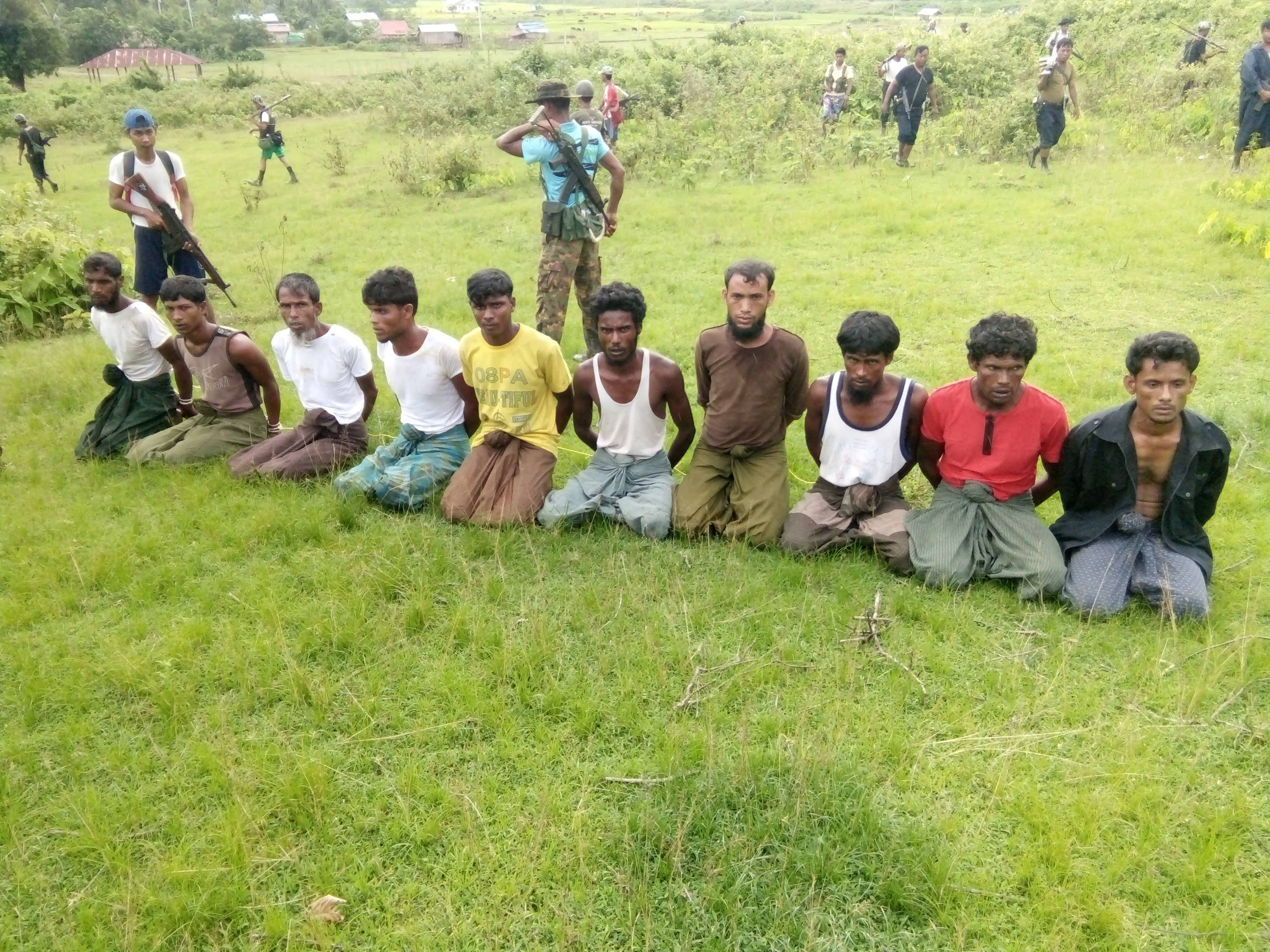 (Reuters) – A Reuters investigation into the killing of Rohingya Muslims in Myanmar prompted a demand from Washington for a credible probe into the bloodshed there and calls for the release of two journalists who were arrested while working on the report.

The special report, published overnight, lays out events leading up to the killing of 10 Rohingya men from Inn Din village in Rakhine state who were buried in a mass grave after being hacked to death or shot by Buddhist neighbors and soldiers.

“As with other, previous reports of mass graves, this report highlights the ongoing and urgent need for Burmese authorities to cooperate with an independent, credible investigation into allegations of atrocities in northern Rakhine,” U.S. State Department spokeswoman Heather Nauert said.

“Such an investigation would help provide a more comprehensive picture of what happened, clarify the identities of the victims, identify those responsible for human rights abuses and violations, and advance efforts for justice and accountability,” she said.

The Reuters report drew on interviews with Buddhists who confessed to torching Rohingya homes, burying bodies and killing Muslims in what they said was a frenzy of violence triggered when Rohingya insurgents attacked security posts last August.

The account marked the first time soldiers and paramilitary police have been implicated by testimony from security personnel in arson and killings in the north of Rakhine state that the United Nations has said may amount to genocide.

In the story, Myanmar said its “clearance operation” is a legitimate response to attacks by insurgents.

Asked about the evidence Reuters had uncovered about the massacre, Myanmar government spokesman Zaw Htay said on Thursday, before publication of the report: “We are not denying the allegations about violations of human rights. And we are not giving blanket denials.”

If there was “strong and reliable primary evidence” of abuses, the government would investigate, he said.

There was no comment from the government following the publication of the report.

Nearly 690,000 Rohingya have fled their villages and crossed the border of western Myanmar into Bangladesh since August.

British Labour Party lawmaker Rosena Allin-Khan told BBC’s Newsnight that the Reuters report was consistent with accounts she had heard while working as a doctor at Rohingya refugee camps in Bangladesh last year.

“We’ve been bystanders to a genocide,” she said. “This evidence marks a turning point because, for the first time since this all started to unfold in August, we have heard from the perpetrators themselves.”

She said that, as well as an international probe, there needed to be a referral to the International Criminal Court.

Human Rights Watch said Myanmar’s military leaders should be held accountable in an international court for alleged crimes against the Rohingya population.

“As more evidence comes out about the pre-planning and intent of the Myanmar armed forces to wipe out Rohingya villages and their inhabitants, the international community … needs to focus on how to hold the country’s military leaders accountable,” said HRW’s deputy Asia director Phil Robertson.

“The international community needs to stop stalling and do what’s necessary to hold accountable those who are responsible before evidence is tainted or lost, memories fade, and more people suffer,” said the group’s chief executive Matthew Smith.

United Nations’ Special Rapporteur on freedom of opinion and expression, David Kaye, said in a tweet: “During the reporting of this article, two Reuters journalists were arrested by Myanmar police. They remain held &amp; must absolutely be released.”

Yanghee Lee, the U.N. human rights investigator for Myanmar who has been barred from visiting the Rohingya areas, echoed that call and added in a tweet: “Independent &amp; credible investigation needed to get to the bottom of the Inn Din massacre.”

Police arrested two Reuters reporters, Wa Lone and Kyaw Soe Oo, on Dec. 12 for allegedly obtaining confidential documents relating to Rakhine and have accused them of violating Myanmar’s Official Secrets Act. They are in prison while a court decides if they should be charged under the colonial-era act. 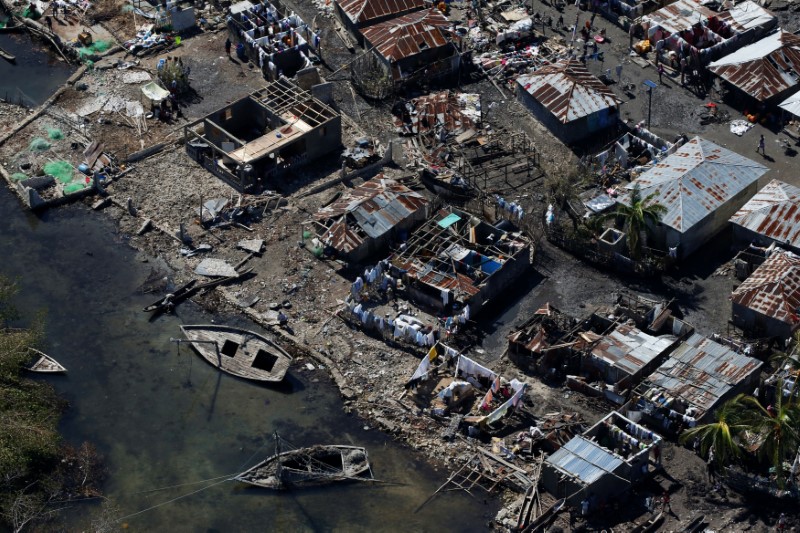 PORT-AU-PRINCE (Reuters) – Haiti started burying some of its dead in mass graves in the wake of Hurricane Matthew, a government official said on Sunday, as cholera spread in the devastated southwest and the death toll from the storm rose to 1,000 people.

The powerful hurricane, the fiercest Caribbean storm in nearly a decade, slammed into Haiti on Tuesday with 145 mile-per-hour (233 kph) winds and torrential rains that left 1.4 million people in need of humanitarian assistance, the U.N. Office for the Coordination of Humanitarian Affairs said.

A Reuters tally of numbers from local officials showed that 1,000 people were killed by the storm in Haiti, which has a population of about 10 million and is the poorest country in the Americas.

The official death toll from the central civil protection agency is 336, a slower count because officials must visit each village to confirm the numbers.

Authorities had to start burying the dead in mass graves in Jeremie because the bodies were starting to decompose, said Kedner Frenel, the most senior central government official in the Grand’Anse region on Haiti’s western peninsula.

Frenel said 522 people were killed in Grand’Anse alone. A tally of deaths reported by mayors from 15 of 18 municipalities in Sud Department on the south side of the peninsula showed 386 people there. In the rest of the country, 92 people were killed, the same tally showed. 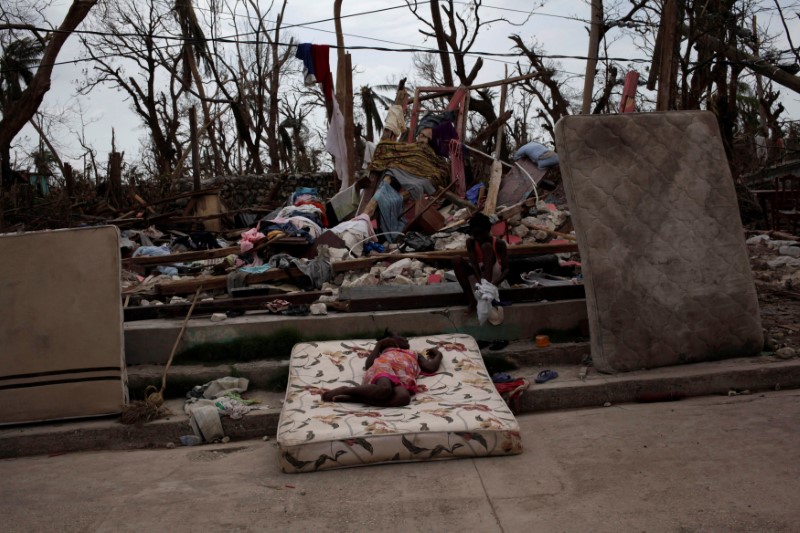 Two girls play amid the rubble after Hurricane Matthew in a street of Port-a-Piment, Haiti, October 9, 2016. REUTERS/Andres Martinez Casares

Frenel said there was great concern about cholera spreading, and that authorities were focused on getting water, food and medication to the thousands of people living in shelters.

Cholera causes severe diarrhoea and can kill within hours if untreated. It is spread through contaminated water and has a short incubation period, which leads to rapid outbreaks.

Government teams fanned out across the hard-hit southwestern tip of the country over the weekend to repair treatment centres and reach the epicentre of one outbreak.