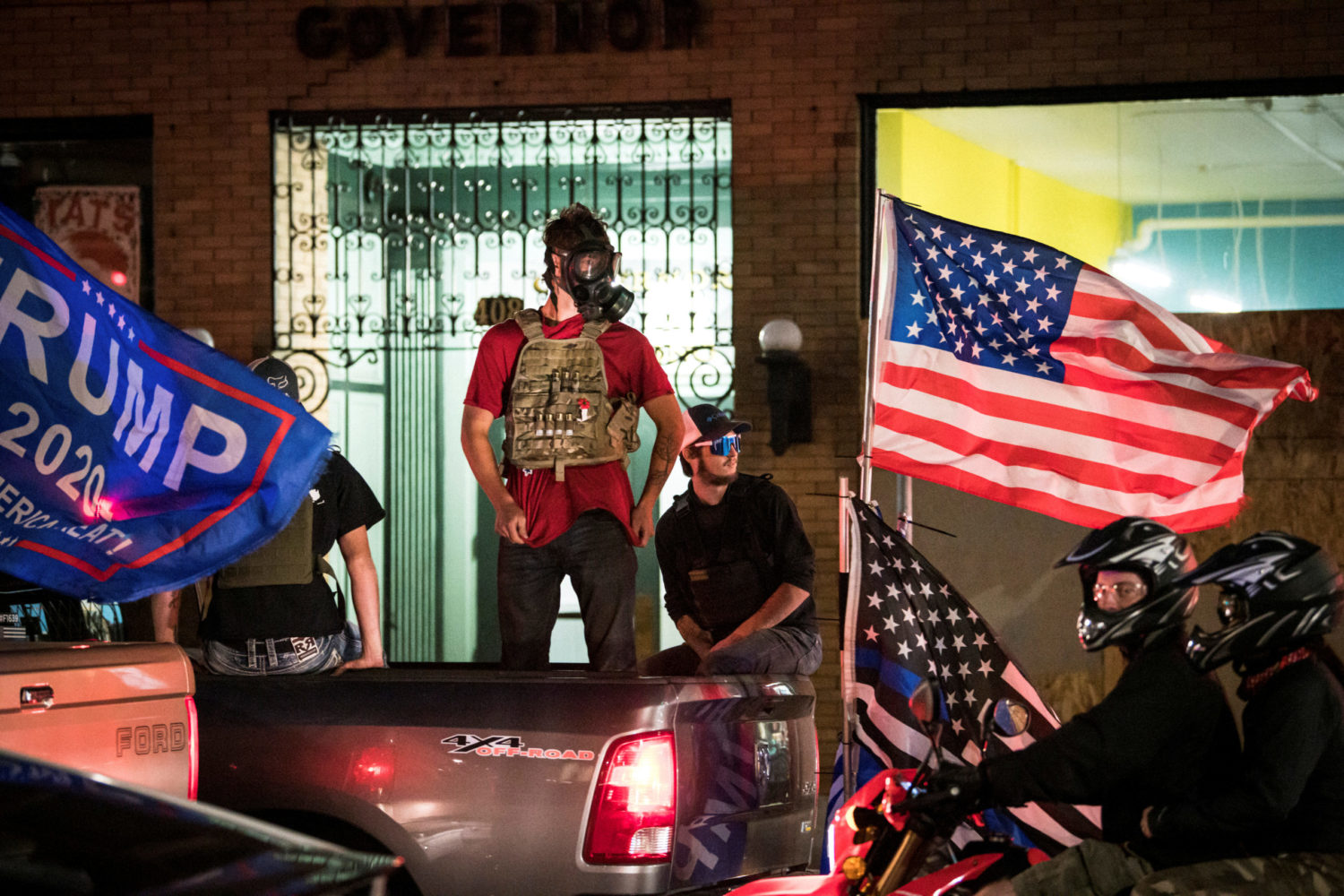 By Steve Gorman and Maria Caspani

(Reuters) – Officials in Portland, Oregon, said on Sunday they were braced for an escalation of protest-related violence that has convulsed the city for three months, citing social media posts vowing revenge for a fatal shooting amid weekend street clashes between supporters of President Donald Trump and counter-demonstrators.

“For those of you saying on Twitter this morning that you plan to come to Portland to seek retribution, I’m calling on you to stay away,” Mayor Ted Wheeler told an afternoon news conference, urging individuals of all political persuasions to join in renouncing violence.

He also lashed out at Trump for political rhetoric that he said “encouraged division and stoked violence,” and brushed aside a flurry of weekend Twitter posts from the president criticizing Wheeler and urging the mayor to request help from the federal government to restore order.

“It’s an aggressive stance. It’s not collaborative,” Wheeler said of Trump’s tweets. “I’d appreciate it if the president would support us or stay the hell out of the way.”

Wheeler and Police Chief Chuck Lovell said investigators were still working to establish the sequence of events leading to the fatal shooting late Saturday in downtown Portland, and they provided few new details about the investigation.

Lovell said it remained to be determined whether the shooting was connected to skirmishes that night between a caravan of protesters driving through the city’s downtown district in pickup trucks waving pro-Trump flags and counter-protesters on the streets.

Video on social media showed individuals in the beds of the pickups firing paint-balls and spraying chemical irritants at opposing demonstrators as they rode by, while those on the street hurled objects at the trucks and tried to block them.

Authorities have not identified the shooting victim. But the New York Times reported the man gunned down was wearing a hat with the insignia of the right-wing group Patriot Prayer. On Sunday, the leader of the group, Joey Gibson, appeared to confirm that the victim was a Patriot Prayer member whom he knew.

“We love Jay, and he had such a huge heart. God bless him and the life he lived,” Gibson wrote on social media. “I’m going to wait to make any public statements until after the family can.”

Trump later re-tweeted a photo of a man identified as Jay Bishop and described in that post as “a good American that loved his country and Backed the Blue,” an apparent reference to police. “He was murdered in Portland by ANTIFA.”

Trump wrote, “Rest in Peace Jay!” in his retweet.

UNDER FIRE FROM TWO SIDES

The mayor also came under renewed fire from several left-wing Oregon-based civil rights and community organizations that have been at odds with Wheeler and called for his resignation in an open letter on Sunday.

“Amid 94 days and nights of protests against police brutality, Mayor Wheeler has fundamentally failed in his responsibilities to the residents of Portland,” the letter said.

Police warned against individuals taking to Twitter on the basis of misinformation.

“There are many who are sharing information on social media who are jumping to conclusions that are not based on facts,” Lovell said.

He said the shooting was preceded by a “political rally involving a vehicle caravan that traveled through Portland for several hours.” He said those vehicles had departed from a prescribed protest route that was supposed to funnel them along Interstate 5, outside Portland, to the site of the rally in neighboring Clackamas County.

He said that by the time the shooting took place, the caravan had already cleared that section of downtown, and that there were no police at the spot when it happened.

Protests, which have grown violent at times, have roiled downtown Portland every night for more than three months following the May 25 killing of George Floyd, the Black man who died under the knee of a white police officer in Minneapolis.

The demonstrators, demanding reforms of police practices they view as racist and abusive, have frequently clashed with law enforcement and on occasion with counter-protesters associated with right-wing militia groups.

The Trump administration in July deployed federal forces to Portland to crack down on the protests, drawing widespread criticism that the presence of federal agents in the city only heightened tensions.

On Sunday’s broadcast of ABC’s “This Week” program, acting Homeland Security Secretary Chad Wolf said, “All options continue to be on the table” to resolve Portland’s unrest. 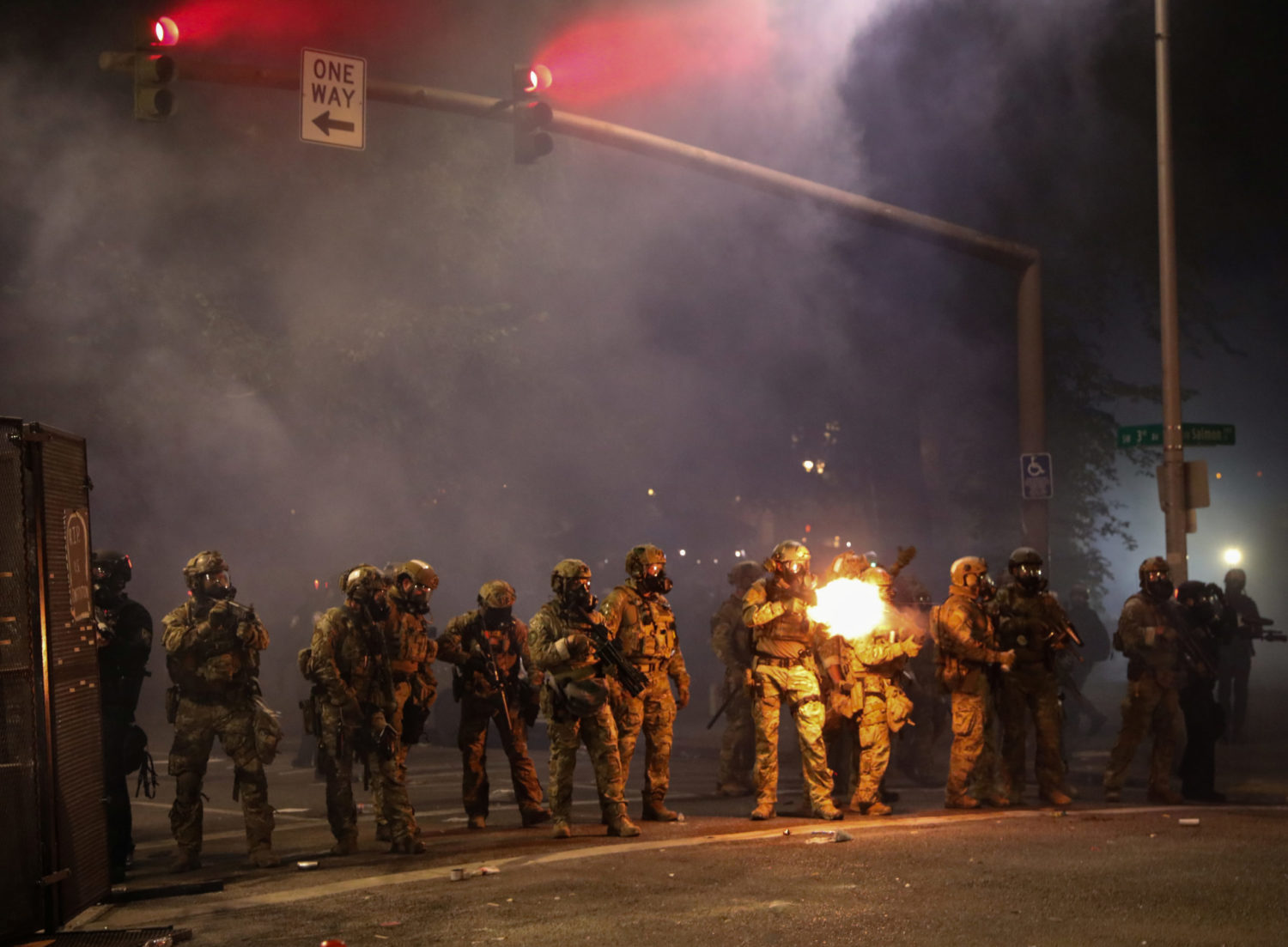 PORTLAND, Ore. (Reuters) – Federal agents fired tear gas canisters at Black Lives Matter demonstrators in downtown Portland early on Friday in a 56th straight day of protests, amid growing scrutiny over the use of border patrol officers in the city.

Positioned behind a steel fence, agents began firing tear gas after a small group of protesters, many helmeted and wearing face masks, lit a fire at the entrance of the building shortly after midnight.

Saying they were being hit with projectiles and lasers, federal agents declared an unlawful assembly and forced protesters back up a block from the federal courthouse.

The agents then retreated to a different corner of the courthouse and confronted protesters there, lobbing more canisters that bounced off the walls of buildings into protesters. Journalists were clearly identifiable in the crowd.

Security forces have frequently tear-gassed and clubbed demonstrators during the unrest. The U.S. Justice Department said on Thursday it would investigate the use of force by federal agents in Portland after another night of unrest in which Mayor Ted Wheeler was tear-gassed.

The investigations follow public anger over the deployment of federal border patrol officers to Portland against the wishes of local officials. U.S. President Donald Trump’s administration has said it is sending a similar contingent to Seattle.

Earlier on Thursday, a federal judge issued a temporary restraining order barring federal law enforcement from using force against journalists and legal observers at the Portland protests. This followed a lawsuit filed on behalf of journalists whom federal agents had hit with non-lethal “impact munitions.”

Demonstrators and local officials see the deployment of the agents in Portland as a ploy by Trump to drum up a “law and order” campaign as he faces an uphill re-election battle.

Homeland Security Secretary Chad Wolf has said all federal agents have been making lawful arrests and properly identifying themselves as law enforcement.

Mayor Wheeler, a Democrat, has called the intervention an abuse of federal power and said it was escalating the violence.

In Geneva, the U.N. human rights office said U.S. police and security forces must not use disproportionate force against protesters and journalists, or detain them unlawfully.

“It is very important that people are able to protest peacefully, that people aren’t subject to unnecessary, disproportionate or discriminatory use of force,” Liz Throssell, U.N. human rights spokeswoman, said.

Earlier in the evening a crowd of thousands of Black Lives Matter supporters gathered in the city center.

“I’m so inspired to see a sea of people who don’t look like me who are saying Black Lives Matter,” said Damany Iqwe, referring to the majority-white crowd.

Iqwe, 43, is a Black man who grew up in Portland and has frequently attended protests that have continued since the death of George Floyd, an unarmed Black man, in police custody in Minneapolis on May 25.

“This city is one of the most systematically racist places to live in as a Black man,” Iqwe said.

(Reporting by Deborah Bloom in Portland, Additional reporting by Rama Venkat in Bengaluru and , Editing by Gerry Doyle and Timothy Heritage, William Maclean)