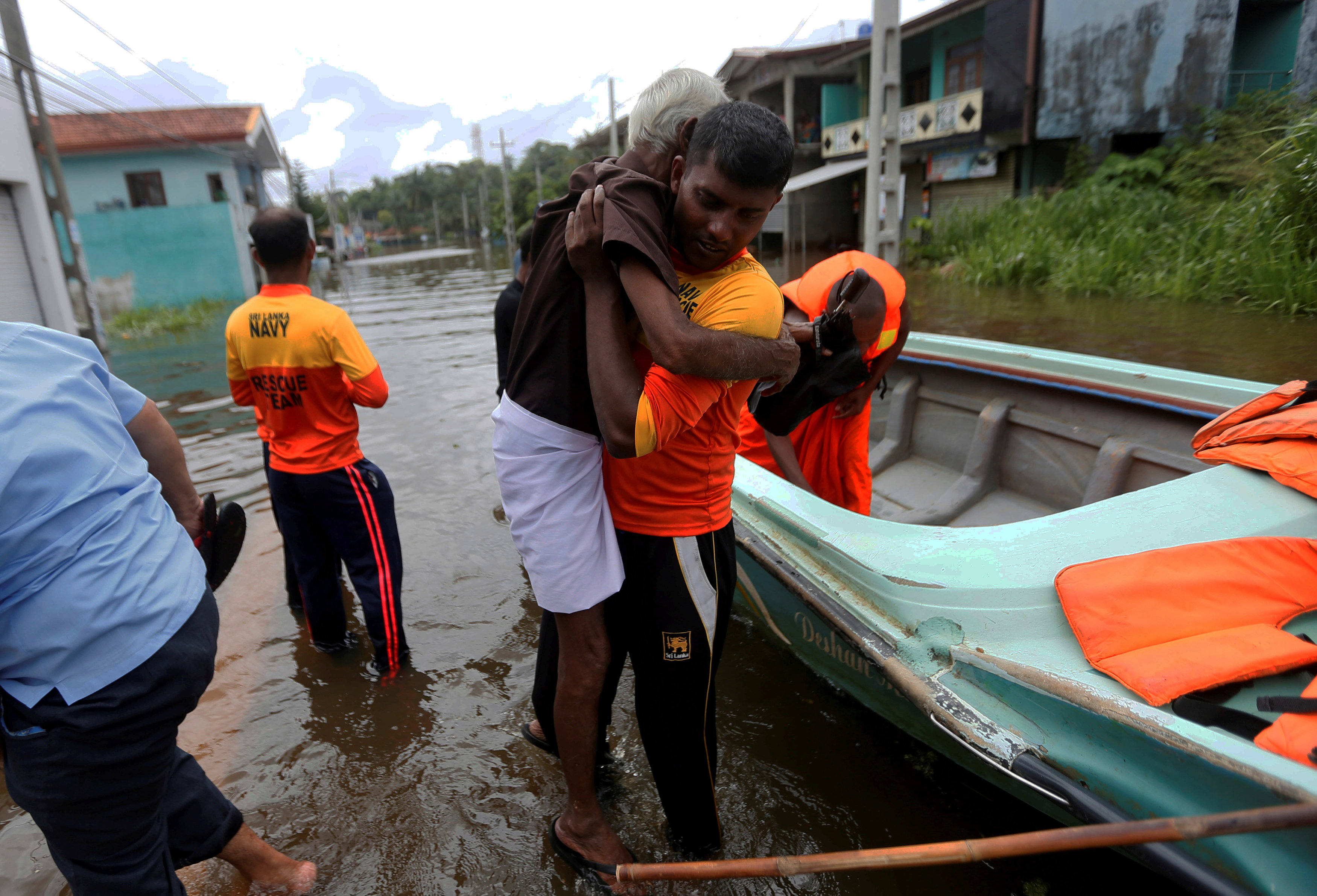 DHAKA/AGALAWATTE, Sri Lanka/ (Reuters) – Bangladesh raised its storm danger signal to the highest level of 10 on Monday as a severe and intensifying cyclone churned toward its low-lying coast and was expected to make landfall in the early hours of Tuesday.

Impoverished Bangladesh, hit by cyclones every year, warned that some coastal areas were “likely to be inundated by a storm surge of four to five feet (1.2 to 1.5 meters)” above normal because of approaching Cyclone Mora.

The Disaster Ministry ordered authorities to evacuate people from the coast, the ministry’s additional secretary, Golam Mostafa, told reporters in Dhaka. About 10 million of Bangladesh’s population of 160 million live in coastal areas.

River ferries had suspended operations and fishing boats called in to safety.

Bangladesh is hit by storms, many of them devastating, every year. Half a million people had their lives disrupted in coastal areas such as Barisal and Chittagong in May last year.

It is still recovering from flash floods that hit the northeast, affecting millions of people, in April. Rice prices have reached record highs and state reserves are at 10-year lows in the wake of flooding that wiped out around 700,000 tonnes of rice.

The cyclone formed after monsoon rains triggered floods and landslides in neighboring Sri Lanka, off India’s southern tip, which have killed at least 177 people in recent days, authorities said, with 24 killed in storms in the eastern Indian state of Bihar, either by lightning strikes or under collapsed village huts.

India warned of heavy rain in the northeastern states of Tripura, Mizoram, Manipur, Nagaland and Arunachal Pradesh as Mora moved further up the Bay of Bengal.

Floods reached roof level and cut off access to many rural Sri Lankan villages, disrupting life for 557,500 people, many of them workers on rubber plantations, officials said. Nearly 75,000 people had been forced out of their homes.

Villagers in Agalawatte, in a key rubber-growing area 74 km (46 miles) southeast of the capital, Colombo, said they were losing hope of water levels falling soon after the heaviest rain since 2003. Fifty-three villagers died and 58 were missing.

“All access to our village is cut off. A landslide took place inside the village and several houses are buried,” Mohomed Abdulla, 46, told Reuters.

Some areas in the southern coastal district of Galle, popular with foreign tourists, have not received relief due to lack of access.

“My entire village is cut off and nobody can come to this village,” C.M. Chandrapla, 54, told Reuters by phone from the tourist village of Neluwa.

“There have been no supplies for the past two days. Water has gone above three-storey buildings and people survive by running to higher ground.” 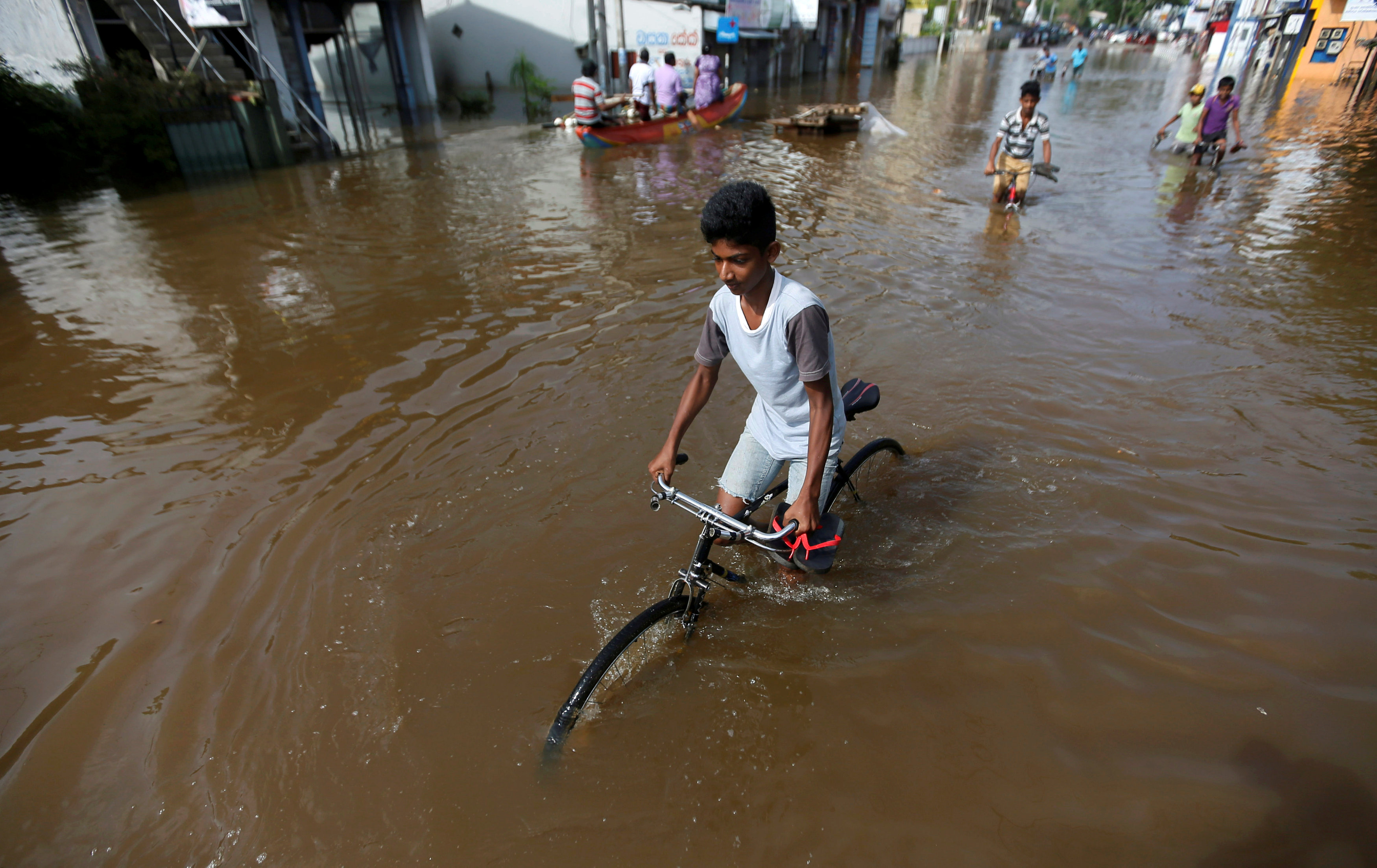 A boy rides his bike along a flooded road in Nagoda village, in Kalutara, Sri Lanka May 29, 2017. REUTERS/Dinuka Liyanawatte

The Sri Lankan military has sent in helicopters and boats in rescue efforts in the most widespread disaster since the 2004 Boxing Day tsunami. About 100 people were missing in total.

The meteorology department forecast torrential rains over the next 36 hours.

Residents in seven densely populated districts in the south and center of Sri Lanka were asked to move away from unstable slopes in case of further landslides.

The wettest time of the year in Sri Lanka’s south is usually during the southern monsoon, from May to September. The island also receives heavy rains in the North West monsoonal season from November to February.

Reuters witnessed some people stranded on the upper floors of their homes. Civilians and relief officials in boats  distributed food, water and other relief items.

One of the worst-hit areas was the southern coastal district of Matara which is home to black tea plantations. Rohan Pethiyagod, head of the Tea Board in the world’s largest exporter of top quality teas, said supplies would be disrupted for the next auction due to a lack of transportation.

Sri Lanka has already appealed for international assistance from the United Nations and neighboring countries.