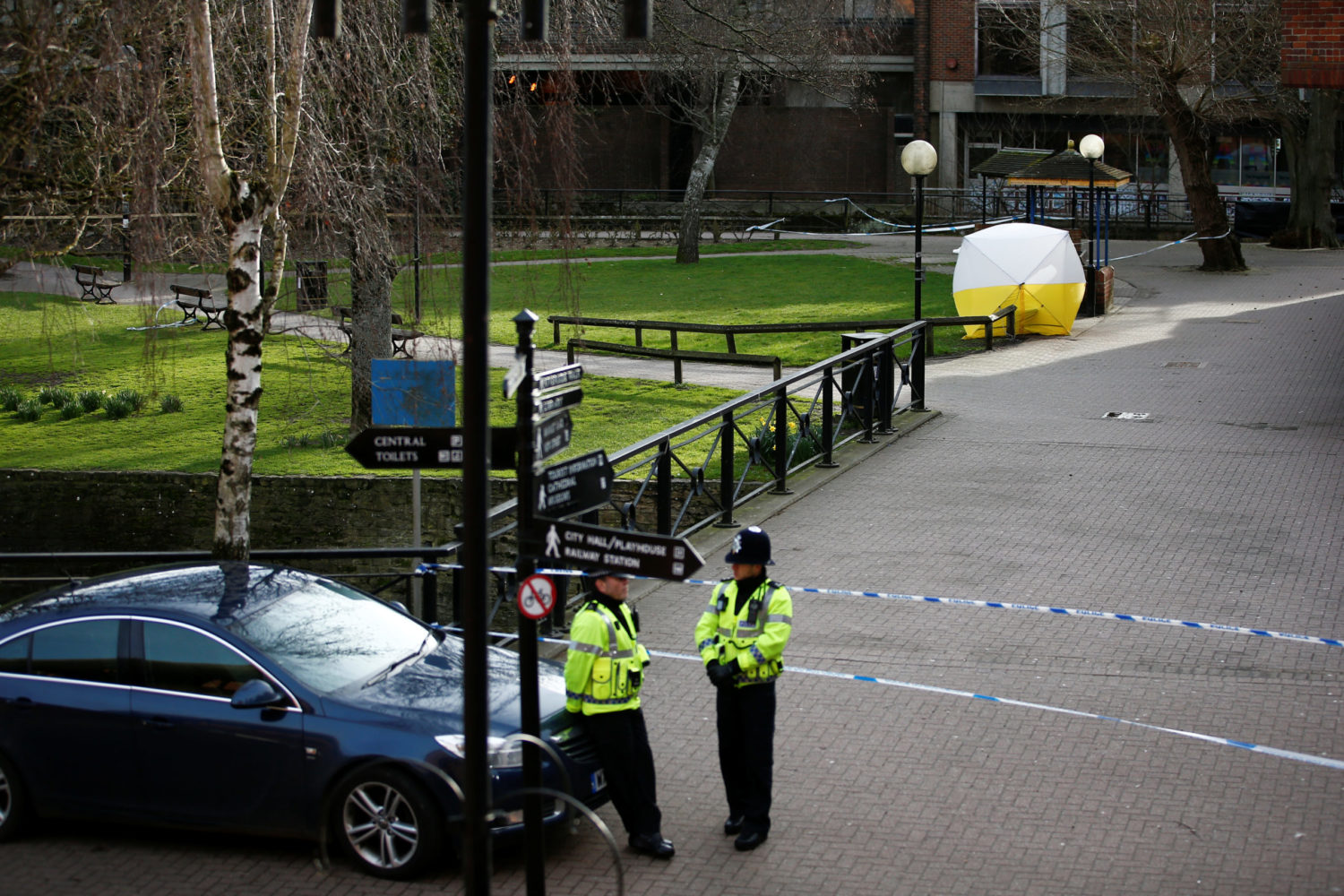 LONDON (Reuters) -British police said on Tuesday a third Russian had been charged in absentia with the 2018 Novichok murder attempt on former double agent Sergei Skripal, saying they could also now confirm the three suspects were military intelligence operatives.

The attack on Skripal, who sold Russian secrets to Britain, caused one of the biggest rows between Russia and the West since the Cold War, leading to the tit-for-tat expulsion of dozens of diplomats after Britain pointed the finger of blame at Moscow.

Russia has rejected any involvement, casting the accusations as anti-Russian propaganda.

Skripal and his daughter Yulia were found unconscious, slumped on a public bench in the southern English city of Salisbury in March 2018. They and a police officer who went to his house were left critically ill in hospital from exposure to the military-grade nerve agent.

A woman later also died from Novichok poisoning after her partner found a counterfeit perfume bottle which police believe had been used to smuggle the poison into the country.

In September 2018, British prosecutors charged two Russians, then identified by the aliases Alexander Petrov and Ruslan Boshirov, with conspiracy to murder Skripal and the attempted murder of Yulia and the officer, Nick Bailey.

Dean Haydon, Britain’s Senior National Coordinator for Counter Terrorism Policing, said prosecutors had now authorized them to charge a third man, Sergey Fedotov, who was aged about 50, with the same offences.

Haydon also said Petrov and Boshirov were really named Alexander Mishkin and Anatoliy Chepiga, and Fedotov’s true name was Denis Sergeev. All three were believed to be in Russia, he said. Britain has no extradition treaty with Russia, and Moscow has so far refused to hand over Petrov and Boshirov.

Prime Minister Boris Johnson’s office said the issue would be raised with the Russian ambassador to London.

Russians “should recognize that our sense that justice must be done is not abated,” Johnson told Sky News in an interview while on a trip to the United States.

The Skripal suspects were a three-man GRU team which had carried out operations on behalf of the Russian state in other countries, and there had been discussions with Bulgaria and the Czech Republic, Haydon said.

“We can’t go into the detail of how, but we have the evidence that links them to the GRU,” Haydon told reporters, the first time police had categorically identified them as Russian spies. “All three of them are dangerous individuals.”

As with the other two Russians, British police had obtained an arrest warrant for Fedotov and they were applying for Interpol notices against him, he said.

The police announcement came on the same day that the European Court of Human Rights ruled that Russia was responsible for the 2006 killing of ex-KGB officer Alexander Litvinenko, who was poisoned at a London hotel with Polonium 210, a rare radioactive isotope.

British police say Petrov and Boshirov carried out the Skripal attack, while Fedotov met them several times over the weekend of March 2-4 when the poisoning occurred.

After they were accused by Britain, Boshirov and Petrov appeared on Russian TV to say they were tourists who had travelled to Salisbury to do some sightseeing.

“There’s the famous Salisbury Cathedral. It’s famous not only in Europe, but in the whole world. It’s famous for its 123 meter-spire,” Boshirov said.