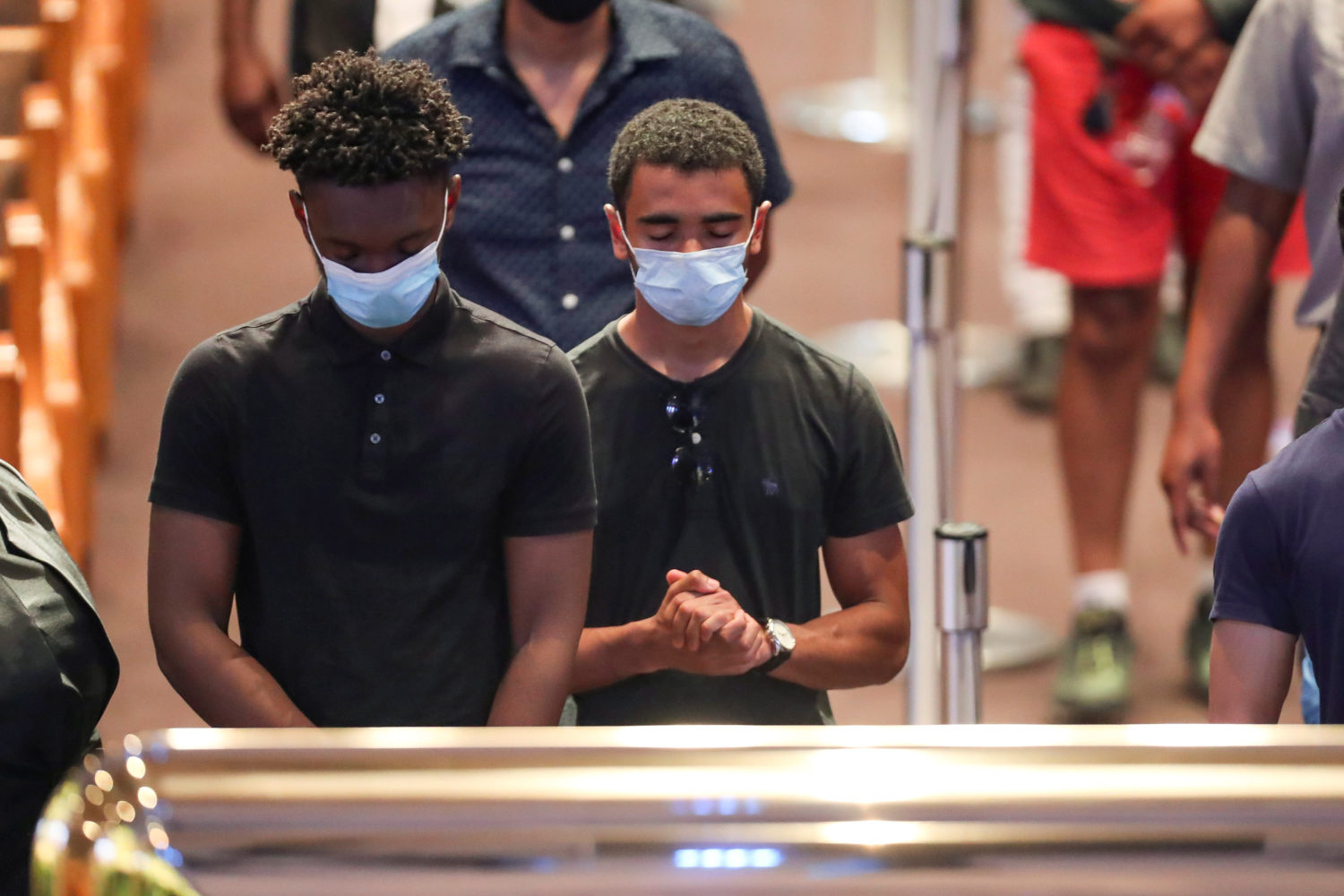 HOUSTON (Reuters) – George Floyd will be buried in Houston on Tuesday two weeks after his death while being held by police in a Minneapolis street, and more anti-racism rallies inspired by his treatment were set to take place in the United States and in Europe.

Thousands of mourners paid their respects on Monday, filing past his open coffin at the Fountain of Praise Church in Houston, Texas, where Floyd grew up.

Some mourners bowed their heads, others made the sign of the cross or raised a fist. Many wore face masks to prevent the spread of the coronavirus in a service that lasted more than six hours. The funeral will be a private ceremony and he will buried next to his mother’s grave.

“I’m glad he got the send-off he deserved,” Marcus Williams, a 46-year-old black resident of Houston, said outside. “I want the police killings to stop. I want them to reform the process to achieve justice, and stop the killing.”

Floyd, a 46-year-old African American, died on May 25 after a white police officer knelt on his neck for nearly nine minutes.

Unarmed and handcuffed, he lay face down in the street, gasping for air and groaning for help before falling silent, footage filmed by a bystander showed.

His death unleashed a surge of protests across the U.S. cities against racism and the systematic mistreatment of black people.

Though mostly peaceful, there have been episodes of arson, looting and clashes with police, whose often heavy-handed tactics have fueled the rage.

The case also thrust President Donald Trump into a political crisis. He has repeatedly threatened to order the military on to the streets to restore order and has struggled to unite the nation. 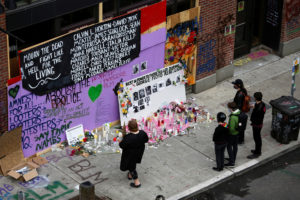 People stand in front of a makeshift memorial as protesters rally against racial inequality and the death in Minneapolis police custody of George Floyd, in Seattle, Washington, U.S. June 8, 2020. REUTERS/Jason Redmond

The demonstrations have reinvigorated the Black Lives Matter movement and raised demands for racial justice and police reforms to the top of the political agenda ahead of the Nov. 3 presidential election.

“I’m here to protest the mistreatment of our black bodies. It’s not going to stop unless we keep protesting,” said Erica Corley, 34, one of the hundreds attending a gathering in the Washington suburb of Silver Spring, Maryland.

Floyd’s death triggered protests across the globe, particularly in countries with a history of colonialism and involvement in the slave trade.

In Britain, thousands of people of all races rallied in several cities over the weekend. In the port city of Bristol, the statue of Edward Colston, who made a fortune in the 17th century from trading African slaves, was pulled down and dumped in the harbor.

A protest is scheduled for Tuesday night at Oxford University to demand the removal of a statue of Cecil Rhodes, a 19th-century businessman in southern Africa long accused of imperialist exploitation.

Mayor Sadiq Khan ordered a review of London statues and street names which largely reflect Britain’s empire in the reign of Queen Victoria.

“It is an uncomfortable truth that our nation and city owes a large part of its wealth to its role in the slave trade and while this is reflected in our public realm, the contribution of many of our communities to life in our capital has been wilfully ignored,” Khan said.

The British parliament held a minute’s silence at 11 a.m. to mark Floyd’s death.

In France, the family of a black Frenchman who died in police custody called for a nationwide protest on Saturday and spurned a government offer of talks.

Adama Traore died in July 2016 after three police officers used their weight to restrain him. His family and supporters have demanded that the officers involved be held to account. No one has been charged.

Thousands of people marched in Paris last Saturday to mark Traore’s death and in solidarity with the U.S. protesters.

Derek Chauvin, 44, the policeman who knelt on Floyd’s neck and is charged with second-degree murder, made his first court appearance in Minneapolis by video link on Monday. A judge ordered his bail raised from $1 million to $1.25 million.

Chauvin’s co-defendants, three fellow officers, are accused of aiding and abetting Floyd’s murder. All four were dismissed from the police department the day after Floyd’s death.

Democratic presidential candidate Joe Biden met with Floyd’s relatives for more than an hour in Houston on Monday.

“He listened, heard their pain and shared in their woe,” family lawyer Benjamin Crump said. “That compassion meant the world to this grieving family.”

In Washington, Democrats in Congress announced legislation to make lynching a federal hate crime and to allow victims of police misconduct and their families to sue law enforcement for damages in civil court, ending a legal doctrine known as qualified immunity.

In Richmond, Virginia, a judge issued a 10-day injunction blocking plans by the state governor to remove a statue of Confederate General Robert E. Lee.