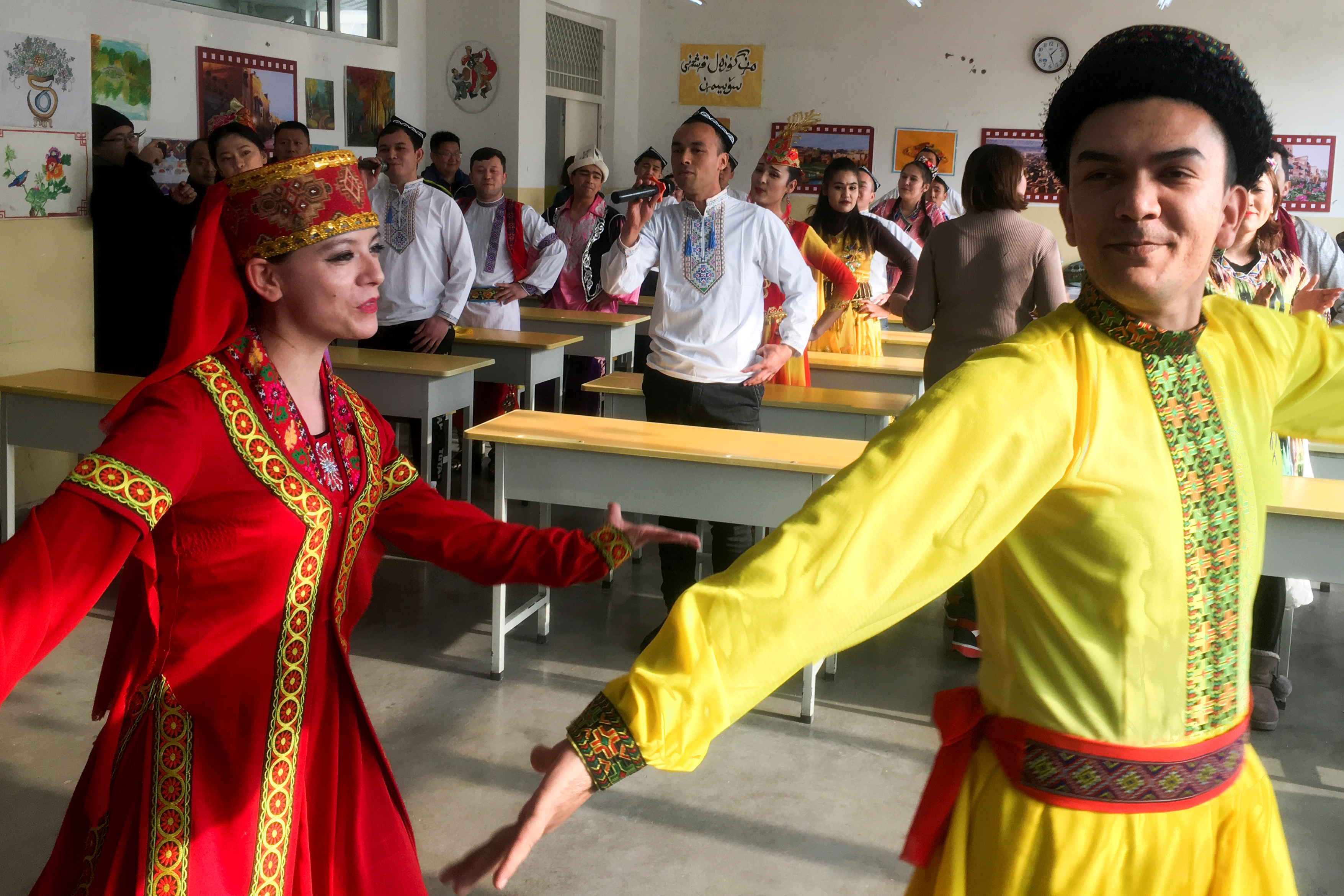 GENEVA (Reuters) – Rights activists urged European and Muslim nations on Monday to take the lead in establishing a U.N. investigation into China’s detention and what they call its “forced indoctrination” of up to one million Uighurs and other Muslims in Xinjiang province.

Beijing, which faces growing international concern over its “de-radicalisation” program for Muslims in its far western province, said last month it would welcome U.N. officials if they avoided “interfering in domestic matters”.

Groups including Human Rights Watch and Amnesty International appealed to the United Nations Human Rights Council, which opens its main annual session on Feb. 25, to send an international fact-finding mission to Xinjiang. 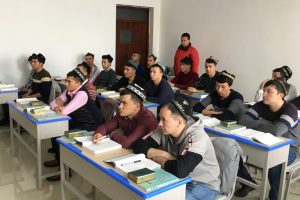 “The abuse in Xinjiang today is so severe that it cries out for international action,” Kenneth Roth, executive director of Human Rights Watch, told a briefing at the Geneva Press Club.

“The purpose of this detention is to erase the ethnic and religious identities of Turkic Muslims and ensure their loyalty to only the Chinese government, the Communist Party and the would-be leader for life, (President) Xi Jinping,” he said.

China denies such accusations. In January, Beijing organized a visit to three facilities, which it calls vocational education training centers, for foreign reporters including Reuters. In the centers, Turkic-speaking Uighur students learned in Mandarin about the dangers of Islamist ideas.

Campaigners say one million Uighurs, Kazakhs and other Muslim minorities – nearly 10 percent of Xinjiang’s total population – are being held in mass detention, deprived of any legal rights and subjected to mistreatment.

“Member states must not be cowed by China’s economic and political clout,” he said.

China says it protects the religion and culture of its ethnic minorities and that security measures in Xinjiang are needed to counter groups that incite violence there.

China is currently a member of the 47-nation Geneva forum, where it often leads opposition to setting up investigations into allegations of rights abuses in specific countries.

The Organisation of Islamic Cooperation (OIC), which acts as the collective voice of the Muslim world, worked with the European Union last September to launch a U.N. body to prepare evidence of crimes in Myanmar against Muslim Rohingya, including possible genocide, for any future prosecution.

“In our view Xinjiang demands a similar response,” Roth said.

Michael Ineichen of the International Service for Human Rights said: “It is really a test of the credibility of the Human Rights Council… We think it is time that membership also comes with scrutiny.” 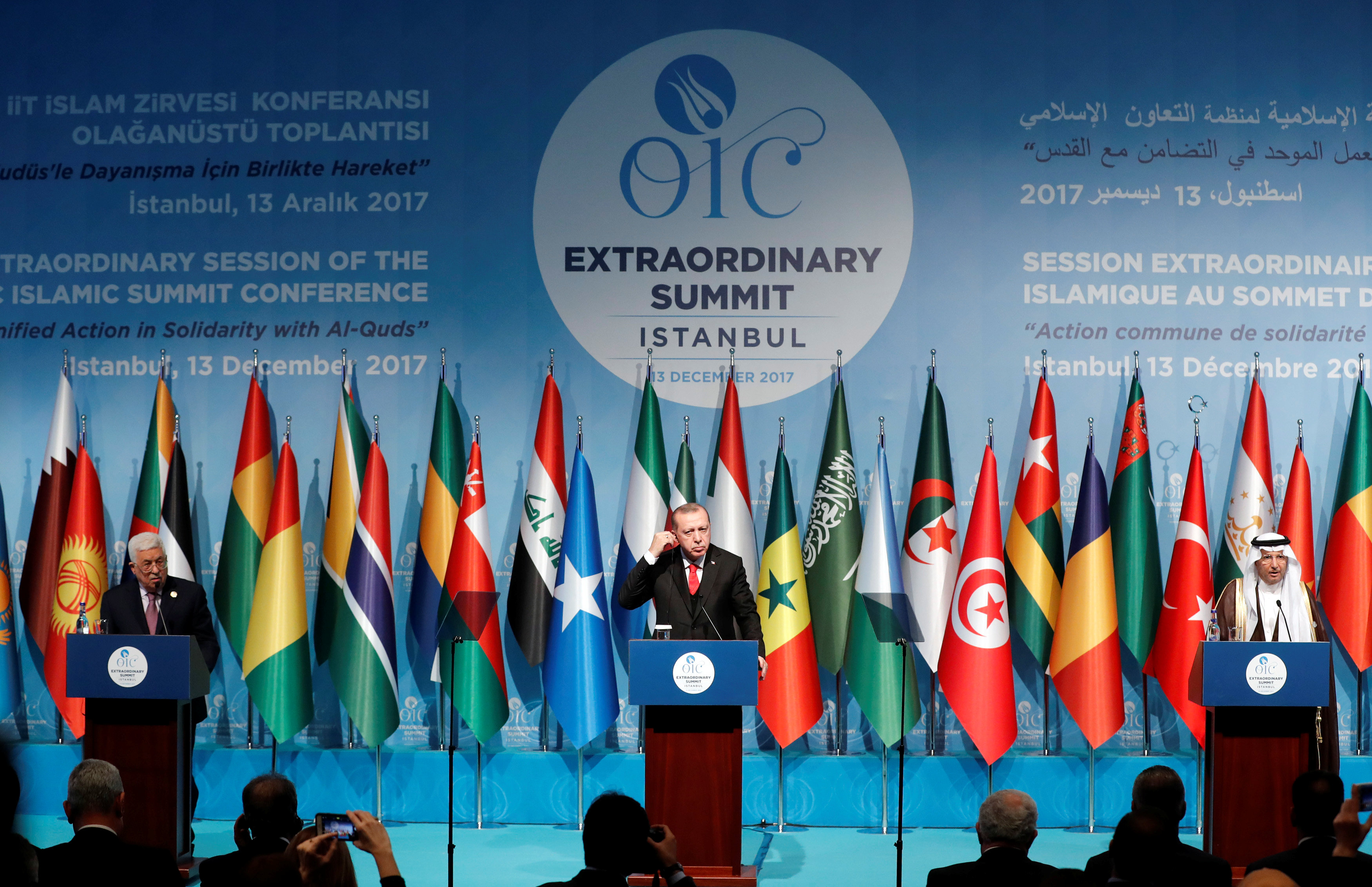 Turkish President Tayyip Erdogan, who hosted the summit of more than 50 Muslim countries in Istanbul, said the U.S. move meant Washington had forfeited its role as broker in efforts to end Israeli-Palestinian conflict.

“From now on, it is out of the question for a biased United States to be a mediator between Israel and Palestine, that period is over,” Erdogan said at the end of the meeting of the Organization of Islamic Cooperation member states.

“We need to discuss who will be a mediator from now on. This needs to be tackled in the U.N. too,” Erdogan said.

A communique posted on the Turkish Foreign Ministry website said the emirs, presidents and ministers gathered in Istanbul regarded Trump’s move “as an announcement of the U.S. Administration’s withdrawal from its role as sponsor of peace”.

It described the decision as “a deliberate undermining of all peace efforts, an impetus (for) extremism and terrorism, and a threat to international peace and security”.

“Jerusalem is and always will be the capital of Palestine,” Abbas said, adding Trump’s decision was “the greatest crime” and a violation of international law.

Asked about the criticism at a State Department briefing in Washington, spokeswoman Heather Nauert said that despite the “inflammatory rhetoric” from the region, Trump “is committed to this peace process.”

“That type of rhetoric that we heard has prevented peace in the past,” she said, urging people to “ignore some of the distortions” and focus on what Trump actually said. She said his decision did not affect the city’s final borders, which were dependent upon negotiation between Israel and the Palestinians.

But when asked whether East Jerusalem could similarly be recognized as the capital of a future Palestinian state, Nauert said that determination should be left to final status negotiations between Israelis and Palestinians.

“We’re taking a position on how we view Jerusalem,” she said. “I think it’s up to the Israelis and Palestinians to decide how they want to view the borders – again final status negotiations.”

Abbas told OIC leaders in Istanbul that Washington had shown it could no longer be an honest broker.

“It will be unacceptable for it to have a role in the political process any longer since it is biased in favor of Israel,” he said. “This is our position and we hope you support us in this.”

Jerusalem, revered by Jews, Christians and Muslims alike, is home to Islam’s third holiest site and has been at the heart of the Israeli-Palestinian conflict for decades. Israel captured Arab East Jerusalem in 1967 and later annexed it in an action not recognized internationally.

The communique on the Turkish ministry website and a separate “Istanbul Declaration” distributed to journalists after the meeting said the leaders called on all countries to recognize East Jerusalem as the capital of Palestine.

“We invite the Trump administration to reconsider its unlawful decision that might trigger…chaos in the region, and to rescind its mistaken step,” the declaration said.

Iran, locked in a regional rivalry with Saudi Arabia, said the Muslim world should overcome internal problems through dialogue so it could unite against Israel. Tehran has repeatedly called for the destruction of the Israeli state and backs several militant groups in their fight against it.

“America is only seeking to secure the maximum interests of the Zionists and it has no respect for the legitimate rights of Palestinians,” Rouhani told the summit.

King Abdullah, whose country signed a peace treaty with Israel more than 20 years ago, said he rejected any attempt to alter the status quo of Jerusalem and its holy sites.

Abdullah’s Hashemite dynasty is custodian of Jerusalem’s Muslim sites, making Amman sensitive to any changes in the city.

Not all countries were represented by heads of government. Some sent ministers and Saudi Arabia, another close ally of Washington’s, sent a junior foreign minister.

Summit host Turkey has warned that Trump’s decision would plunge the world into “a fire with no end in sight”.

Erdogan described it as reward for Israeli actions including occupation, settlement construction, land seizure and “disproportionate violence and murder”.

“Israel is an occupying state (and) Israel is a terror state,” he told the summit.

“I invite all countries supporting international law to recognize Jerusalem as the occupied capital of Palestine,” Erdogan told OIC leaders and officials.

Trump’s declaration has been applauded by Israeli Prime Minister Benjamin Netanyahu, who said Washington had an irreplaceable part to play in the region. 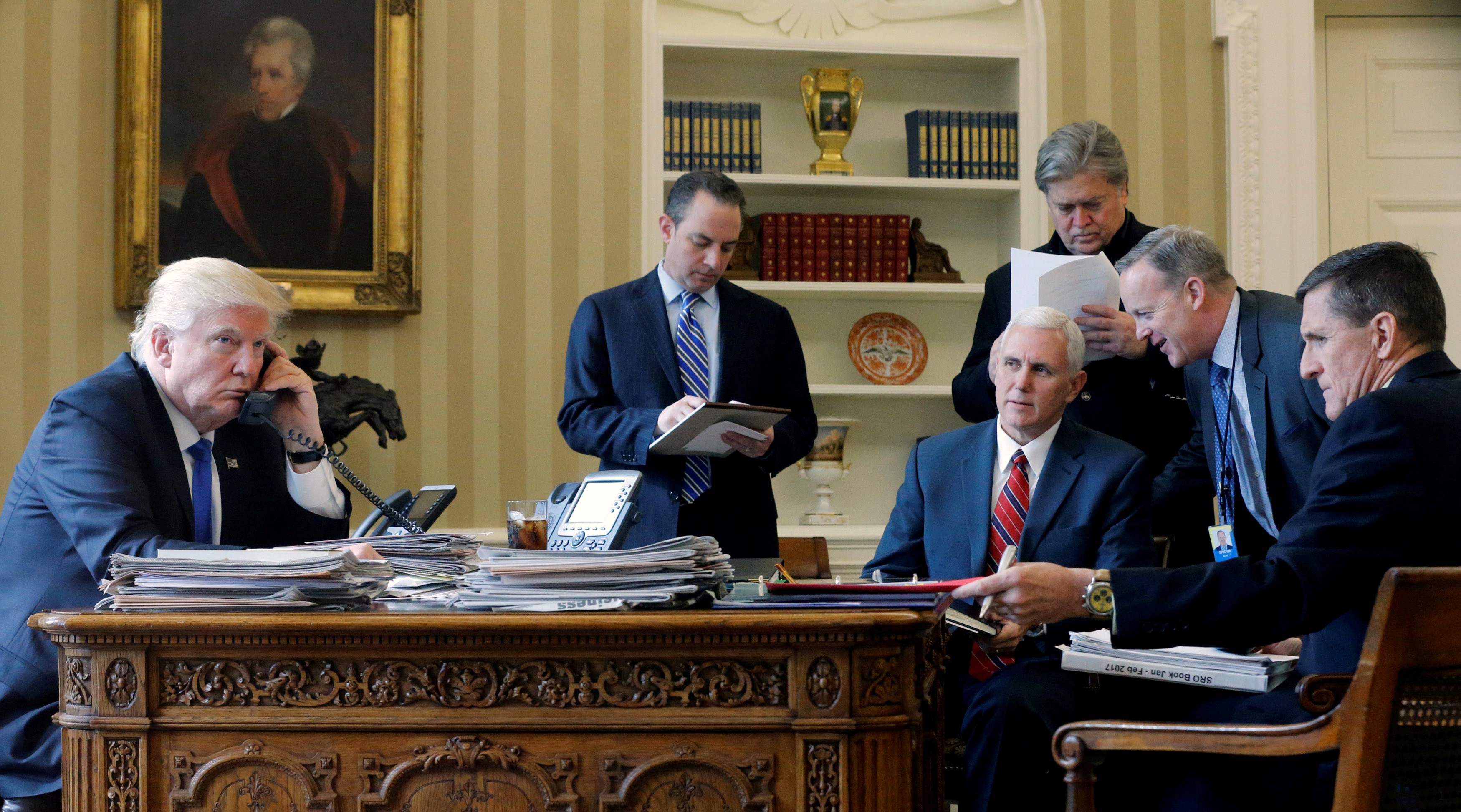 By Jeff Mason and Roberta Rampton

WASHINGTON (Reuters) – U.S. President Donald Trump defended his order to temporarily bar entry to people from seven majority-Muslim nations, which has come under intense criticism at home and abroad, saying on Thursday it was crucial to ensuring religious freedom and tolerance in America.

Trump, speaking at a prayer breakfast attended by politicians, faith leaders and guests including Jordan’s King Abdullah, said he wanted to prevent a “beachhead of intolerance” from spreading in the United States.

“The world is in trouble, but we’re going to straighten it out, OK? That’s what I do – I fix things,” Trump said in his speech.

Trump’s executive order a week ago put a 120-day halt on the U.S. refugee program, barred Syrian refugees indefinitely and imposed a 90-day suspension on people from seven predominantly Muslim countries – Iran, Iraq, Libya, Somalia, Sudan, Syria and Yemen. The measure, which Trump says is aimed at protecting the country from terrorist attacks, has drawn protests and legal challenges.

Trump, a wealthy businessman and former reality TV star who had never previously held public office when he was sworn in on Jan. 20, also sought to reassure the large crowd about the nature of his phone calls with world leaders.

The Washington Post said Trump had a tense call with Australia’s Prime Minister about his immigration order.

“We’re taken advantage of by every nation in the world virtually. It’s not going to happen anymore,” said Trump, who campaigned on a stance of “America first” that he said would ensure the country was not taken advantage of in its trade or other foreign relations.

Critics of the measure have accused him of violating the constitutional guarantee of religious freedom, because the designated countries are majority-Muslim, and of slamming the door shut to refugees.

Trump has said the move was necessary to ensure a more thorough vetting of people coming into the United States.

“Our nation has the most generous immigration system in the world. There are those who would exploit that generosity to undermine the values that we hold so dear,” Trump said.

“There are those who would seek to enter our country for the purpose of spreading violence, or oppressing other people based upon their faith or their lifestyle – not right. We will not allow a beachhead of intolerance to spread in our nation,” he said.

He also pledged to get rid of the “Johnson Amendment,” a tax provision that prevents tax-exempt charities like churches from being involved in political campaigns.

The White House said on Wednesday it has issued updated guidance on the travel order clarifying that legal permanent residents, or green card holders, from the designated countries require no waiver to enter the United States.