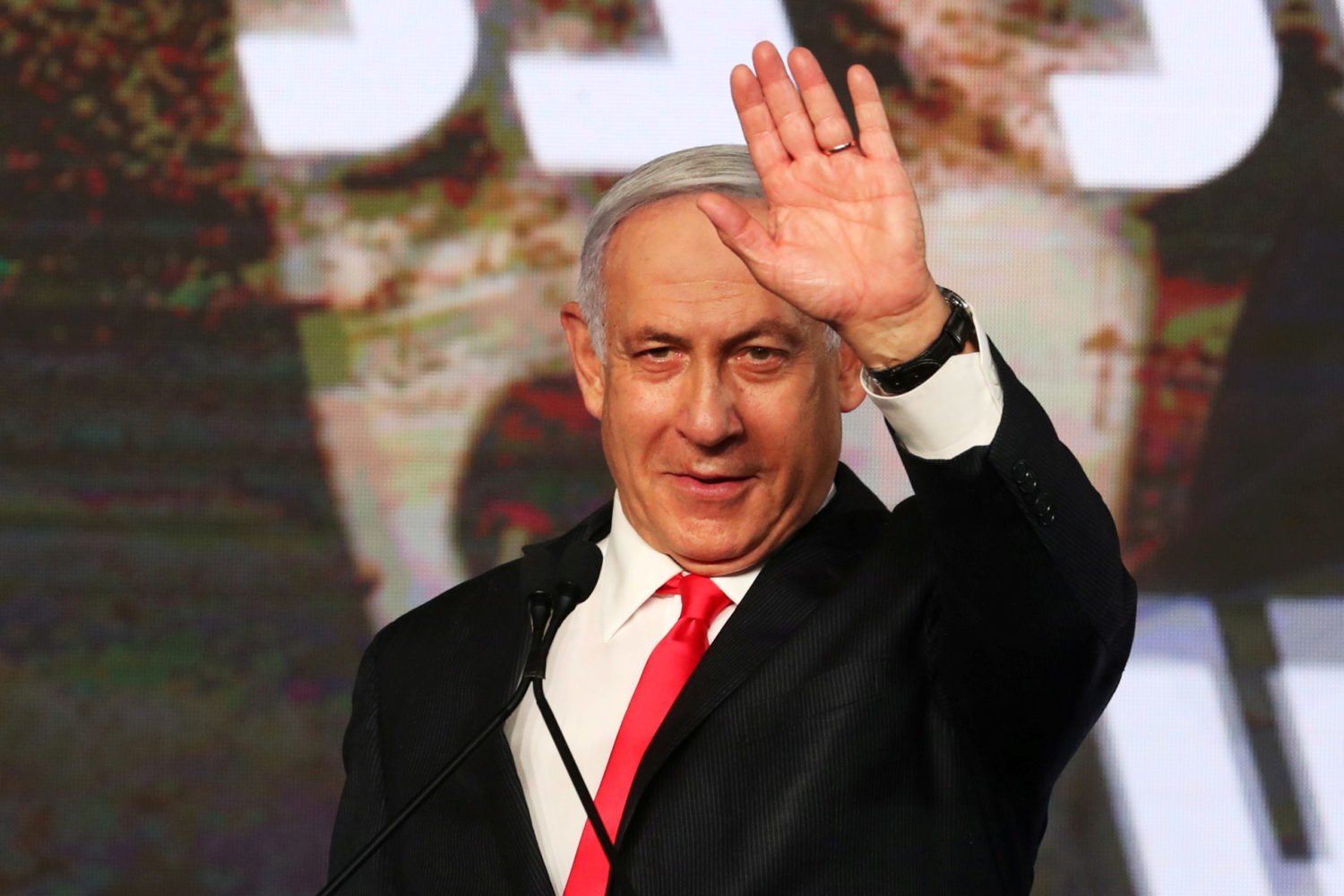 The country’s longest-serving leader, in power without interruption since 2009, now faces the tough challenge of enlisting enough allies for a governing coalition.

Under law, Netanyahu will have 28 days to do so, with the possibility of a two-week extension before President Reuven Rivlin picks another candidate or asks parliament to choose one. Continued deadlock could ultimately result in a new election.

Announcing on television his choice of Netanyahu, Rivlin cast doubt on his prospects for success and on whether any other prospective candidate could complete the task.

“To my great regret, I have the impression that none of the candidates, at this stage, has a real chance of putting together a government, one that would win a confidence vote in parliament,” Rivlin said.

He noted that he was legally bound to make the nomination nonetheless.

Netanyahu struck an upbeat note, however, telling his conservative Likud faction: “The task is not easy but not impossible. The goal is within reach. I reckon we can do it.”

Israel’s election on March 23, its fourth in two years, ended with neither a Netanyahu-led rightist and religious bloc nor a prospective alliance of his opponents capturing a parliamentary majority.

In consultations Rivlin held with political parties on Monday on granting the coalition-building mandate, Netanyahu received more endorsements than his challengers.

In his televised remarks, Rivlin said that under Israeli law, Netanyahu, as the incumbent, was not disqualified from being assigned the task despite his indictment on corruption charges.

Rivlin made the announcement as Netanyahu’s trial entered its second day in a Jerusalem courthouse.

Charged with bribery, breach of trust and fraud, Netanyahu has denied any wrongdoing, accusing the prosecution of an “attempted coup” aimed at ousting a “strong, right-wing prime minister”.

“The president fulfilled his duty and he had no choice, but granting Netanyahu the mandate is a shameful stain on Israel,” Netanyahu’s strongest rival, centrist politician Yair Lapid, said.

Netanyahu, backed by 52 of parliament’s 120 members, has tried to break the stalemate by urging two right-wing rivals – former defence chief Naftali Bennett and veteran politician Gideon Saar – to join him.

Bennett, addressing his Yamina faction, wished Netanyahu success in his task, but the possible kingpin politician remained non-committal on whether he would enter into such an alliance.

“We will come, with goodwill, to any coalition talks in order to establish a stable, right-wing government,” Bennett said. “I pledge that whatever government is created, regardless of who puts it together, we will make sure that it represents all Israeli citizens.”

Saar, leader of the New Horizon faction, has publicly ruled out serving under Netanyahu, saying a change in national leadership was imperative.

Lapid, who heads the Yesh Atid party, said on Monday he had proposed a coalition deal to Bennett. Under the arrangement, Bennett would serve first as prime minister and then Lapid would take over.

Bennett, who has seven seats in parliament to Lapid’s 17, said such a government must reflect the right-wing sentiment of most Israeli voters rather than just be a patchwork alliance of parties from the right, centre and left. 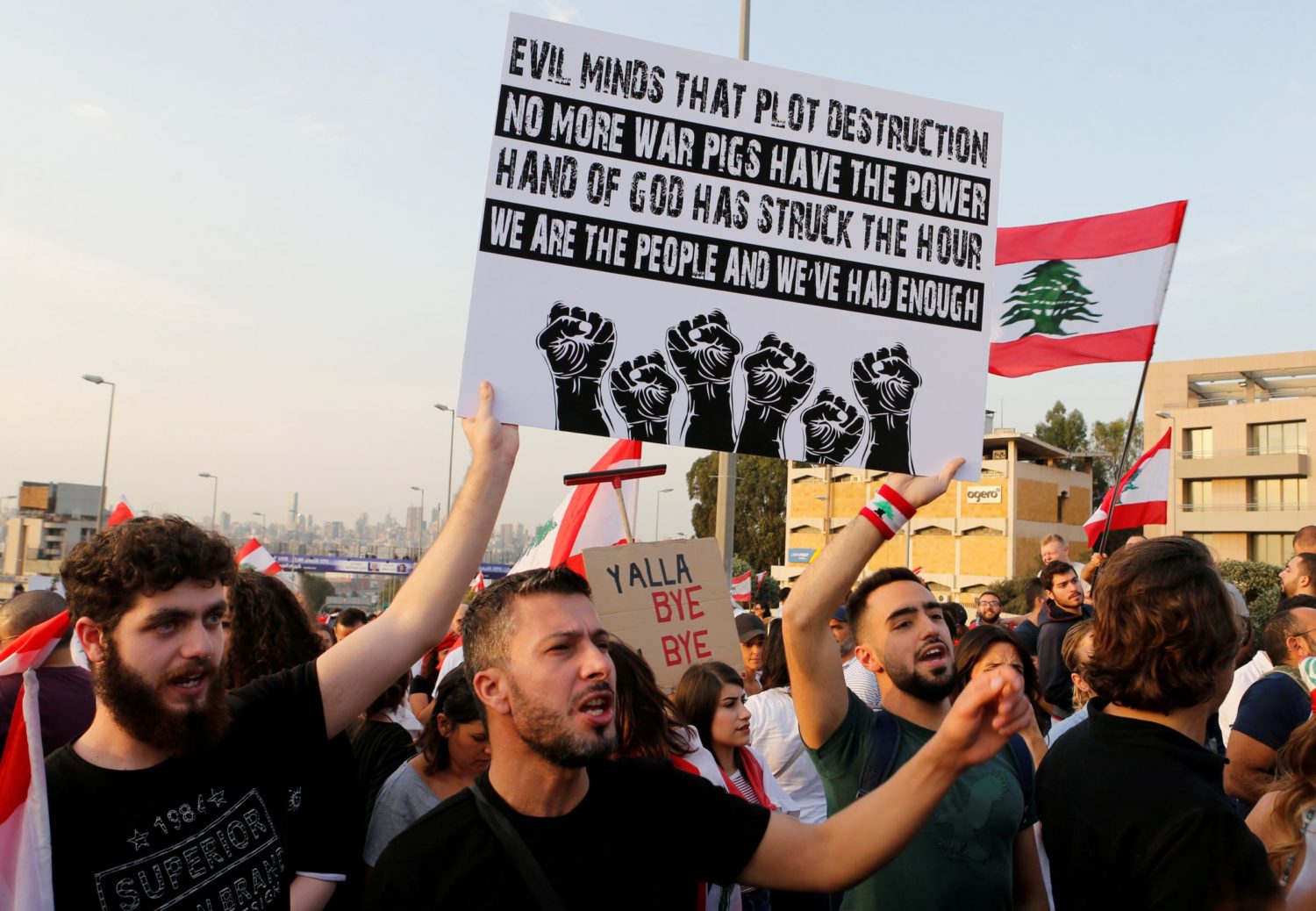 BEIRUT (Reuters) – Lebanon’s Defence Minister said on Thursday the country was in a “very dangerous situation” and compared street unrest of recent days to the start of 1975-90 civil war.

One month after the start of nationwide protests, Lebanon is in serious political and economic trouble with no indication of its leaders agreeing on a new government to replace the outgoing cabinet of Saad al-Hariri, who quit as premier on Oct. 29.

Despite the magnitude of the economic crisis, the biggest since the war, leaders have not yet been able to agree a new cabinet or to tackle the grievances of demonstrators who say Lebanon has been ruined by corruption and sectarian cronyism.

Though the protests have been overwhelmingly peaceful, a protester was shot dead in an altercation with soldiers on Tuesday. A funeral was held for the protester, a follower of Druze politician Walid Jumblatt, while the soldier who opened fire has been detained.

Caretaker Defence Minister Elias Bou Saab said tensions on the street and road closures “have reminded us of the civil war, what happened in 1975. And this situation is very dangerous.”

Bou Saab, a political ally of President Michel Aoun, said demonstrators had the right to protest and to be protected. But the army and security services could not tolerate violence.

Aoun said he hoped a government could be formed in the coming days to meet the demands of the protesters.

He enraged protesters in an televised interview on Tuesday evening with a comment widely understood to mean he was telling them to emigrate if they didn’t like how the country was run.

Schools, banks and many shops were closed for the third straight day. Some major routes around the capital that had been barricaded by protesters were unblocked by authorities, but the political mood remained brittle.

“WE ARE ALL IN DEEP TROUBLE”

Hani Bohsali, general manager of Bohsali Foods and president of a group representing around 50 importers, said he was among businessmen who had warned of more trouble at a meeting with Central Bank governor Riad Salameh and other top bankers.

“My message to all of them is that we are all in deep trouble, but you have to give priority to the food supply. Because the food is even more important than the fuel,” he said.

Banks, which were shut for half of October, closed again this week over staff security concerns. Most transfers out of the country have been blocked and, with U.S. dollars scarce, the pegged Lebanese pound is weakening on the black market.

So far there has been no sign of significant shortages.

Paul Kallassi, a board member of Kallassi Group, a major buyer and distributor of food, said suppliers have so far continued to ship based on “trust” even as arrears mount, a situation he said was not sustainable.

“They cannot finance millions of dollars just because they trust me,” said Kallassi.

Lebanon’s bank staff union called for employees to stay on strike until it received details of a security plan, especially on how to deal with customers demanding their cash.

A banker said that by remaining closed, banks were also avoiding the problem of depositor panic.

“You have a problem of liquidity, and there is no solution for it, unless you put in place a proper plan to solve the problem, there is no need to open the banks,” a banker said.

“You need to have a political solution, to offer a little bit of confidence, and this will eventually allow you to calm down the market and reopen normally.” 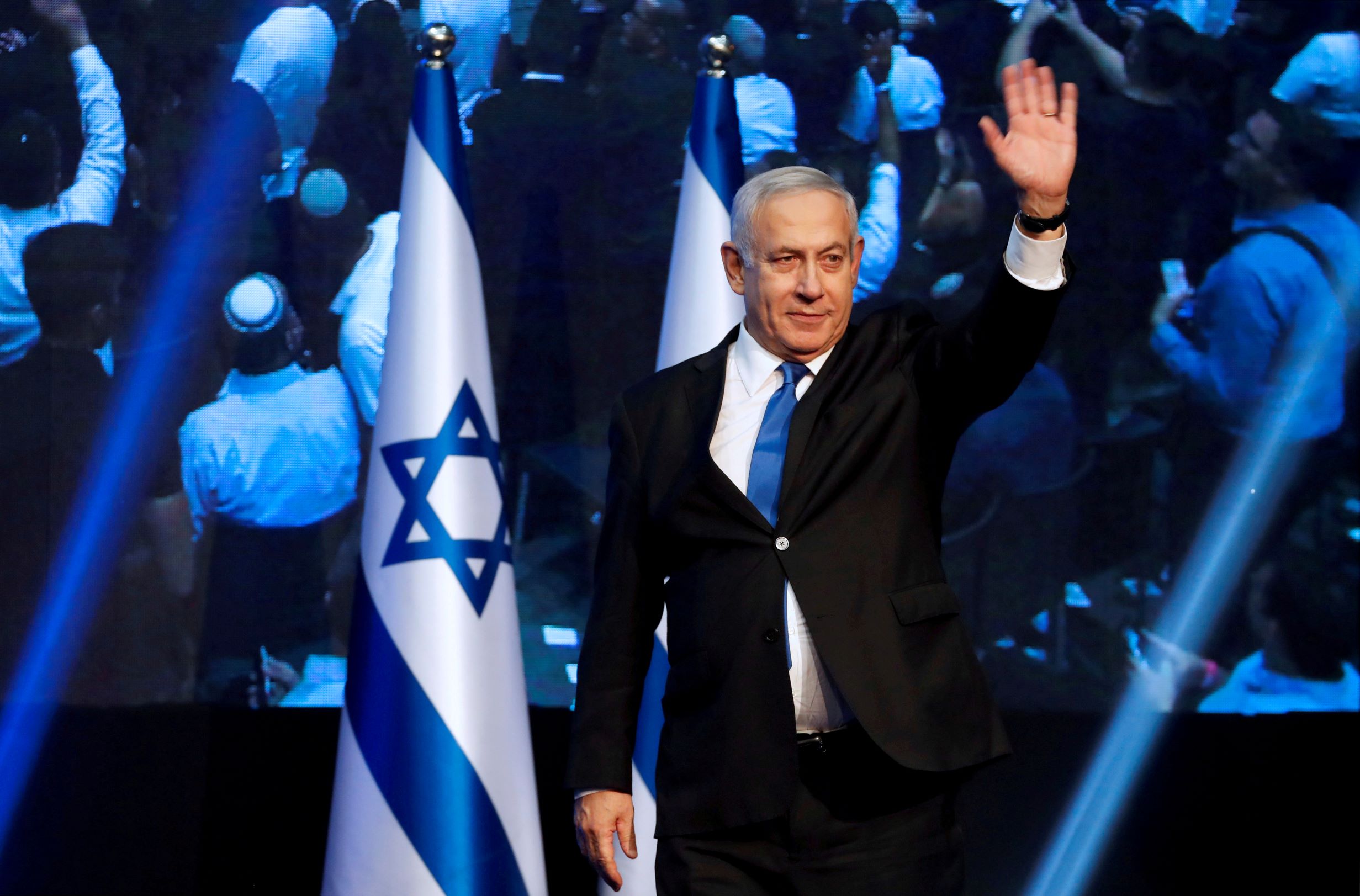 Netanyahu, head of the right-wing Likud party, and Israel’s longest-serving leader, still has no clear path to a fifth term after emerging from the Sept. 17 ballot, the second this year, short of a parliamentary majority.

“I have decided to give you, sir, the opportunity to assemble a government,” President Reuven Rivlin said to Netanyahu at a nomination ceremony.

He will have 28 days to form a coalition and can ask Rivlin for a two-week extension if necessary. Netanyahu’s failure to clinch victory in a ballot in April led to last week’s election and left him politically weakened.

In the new countdown, Likud has the pledged support of 55 legislators in the 120-member parliament, against 54 for Gantz’s centrist Blue and White Party. The two parties failed to reach a coalition deal in talks launched on Tuesday.

Former Defence Minister Avigdor Lieberman, a possible kingmaker, has been keeping his far-right Yisrael Beitenu party on the fence since the Sept. 17 ballot, citing differences with both Likud’s and Blue and White’s political allies. 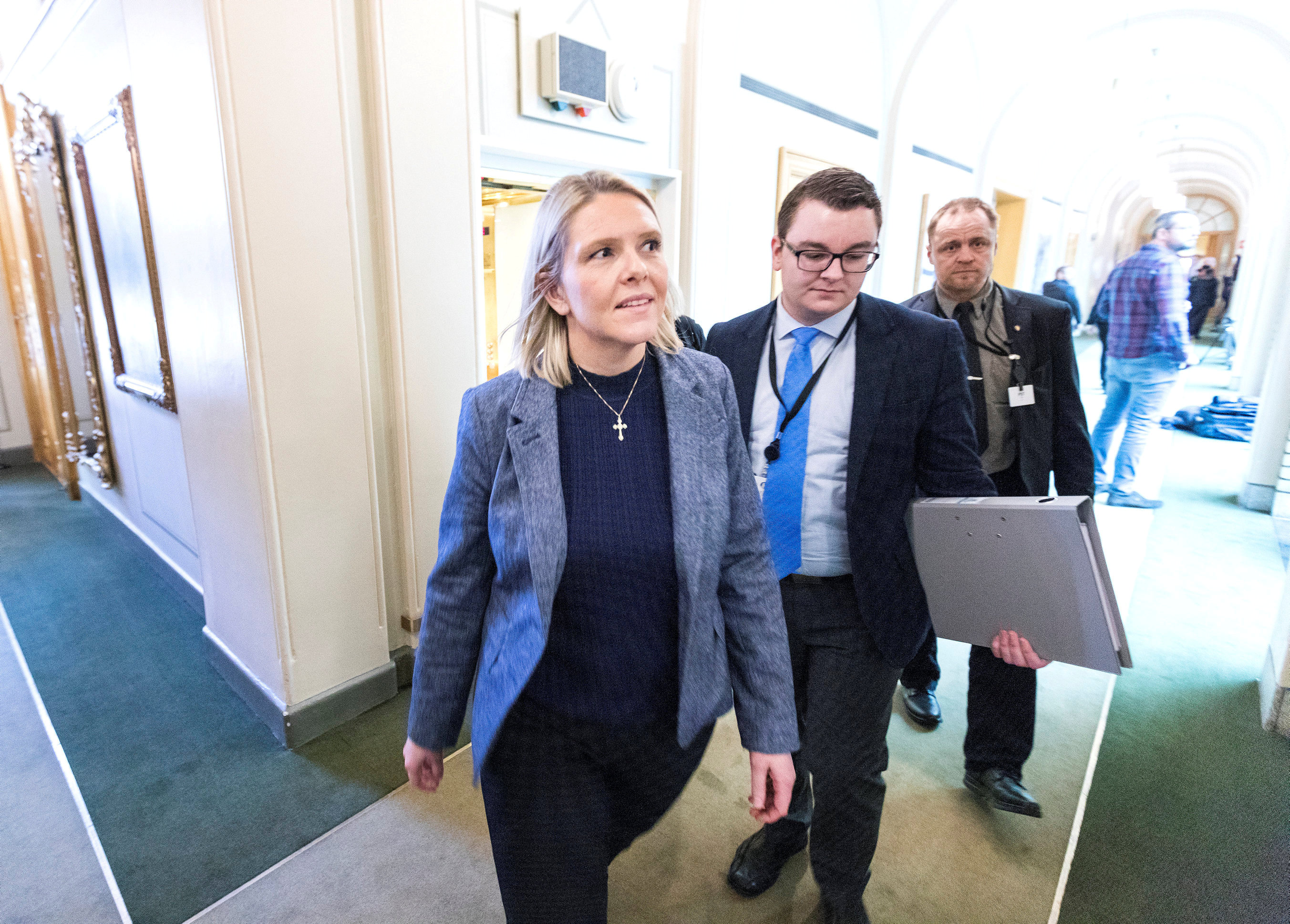 By Joachim Dagenborg and Terje Solsvik

OSLO (Reuters) – Norway’s Christian Democrats, holding the balance of power in parliament, were meeting on Monday to decide whether to back a no-confidence motion against the justice minister, a step that could bring down the government.

Sylvi Listhaug has rocked Norway’s traditionally consensual politics by accusing the opposition Labour Party – in 2011 the target of the country’s worst peacetime massacre – of putting terrorists’ rights before national security.

Five opposition parties last week said they would vote on Tuesday to oust the minister, leaving her fate in the hands of the small Christian Democratic Party.

“The polarizing rhetoric and behavior must end,” party leader Knut Arild Hareide told delegates in an opening address on Monday, before talks began in earnest behind closed doors.

He said he was seeking their advice on how to proceed. “The conclusion has not been drawn,” he added.

On Sunday, daily Verdens Gang and broadcasters NRK and TV2 quoted sources close to Prime Minister Erna Solberg as saying her cabinet would stand by Listhaug and resign if the no-confidence vote succeeded.

Snap elections are not allowed, and Norway’s next general election is not due until 2021. Solberg might be able to form a new government, but if the Christian Democrats switched sides the task could fall to Labour leader Jonas Gahr Stoere.

Political scientist Johannes Bergh said they were unlikely to do so.

On July 22, 2011, far-right extremist Anders Behring Breivik killed eight people in downtown Oslo with a car bomb and then shot dead 69 people, many of them teenagers, at a Labour party camp on Utoeya Island.

On March 9, Listhaug posted on Facebook a photograph of masked people clad in military fatigues, black scarves and ammunition with the text: “Labour thinks terrorists’ rights are more important than the nation’s security. Like and Share”.

The comments unleashed a political storm, and Listhaug, a member of the right-wing Progress Party, apologized in parliament on March 13. Most opposition parties said her gesture was not sincere enough.

Many attempts have been made in parliament to oust governments via no-confidence motions, but the last to succeed in bringing down a cabinet was in 1963.

Daily Aftenposten on Monday said Solberg and Christian Democrat leader Hareide had discussed the possibility of defusing the situation by having Listhaug apologize again.

The dispute erupted after Labour and the Christian Democrats helped defeat a bill allowing the state the right, without judicial review, to strip individuals of Norwegian citizenship if they were suspected of terrorism or joining foreign militant groups.

Hareide’s party has backed Conservative leader Solberg for prime minister since 2013, but has declined invitations to join the cabinet, primarily due to its opposition to the Progress Party. 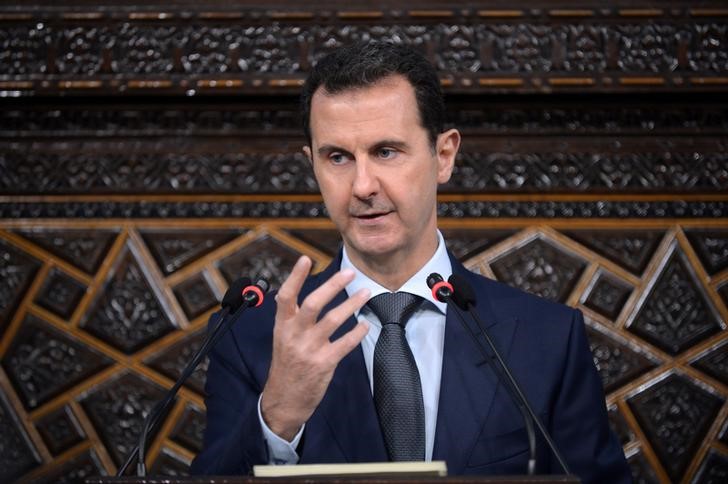 SANA gave no details on why Khamis would replace Wael al-Halaki as prime minister, or whether Halaki would be included in the new administration or had left government. Halaki himself replaced a prime minister who defected to the opposition.

The Damascus-based government controls most of the war-torn country’s major population centers in the west, with the notable exceptions of Idlib, which is held by insurgents, and Aleppo, where it controls half of the city.

Kurdish forces are in control of vast areas along the Turkish border, and Islamic State holds Raqqa and Deir al-Zor provinces in the east.

Parliamentary elections were held in government-controlled areas in April, which the opposition said were meaningless.

Syria’s conflict, which began as a peaceful uprising against Assad, is now in its sixth year and has drawn in military involvement from regional and world powers and allowed for the growth of Islamic State.

Damascus formed a new government more than a year into the war in 2012, but its prime minister at the time, Riad Hijab, fled Syria soon afterwards. Hijab is now a prominent member of the main Syrian opposition that attended failed peace talks this year.

Assad ally Russia said last week there were U.S. proposals to incorporate parts of the opposition into the current Syrian government. Washington denied any such proposals and insists Assad must leave power.

The war has killed more than 250,000 people and displaced more than 11 million, half Syria’s pre-war population.

It has damaged the economy, causing the Syrian pound to lose more than 90 percent of its value.