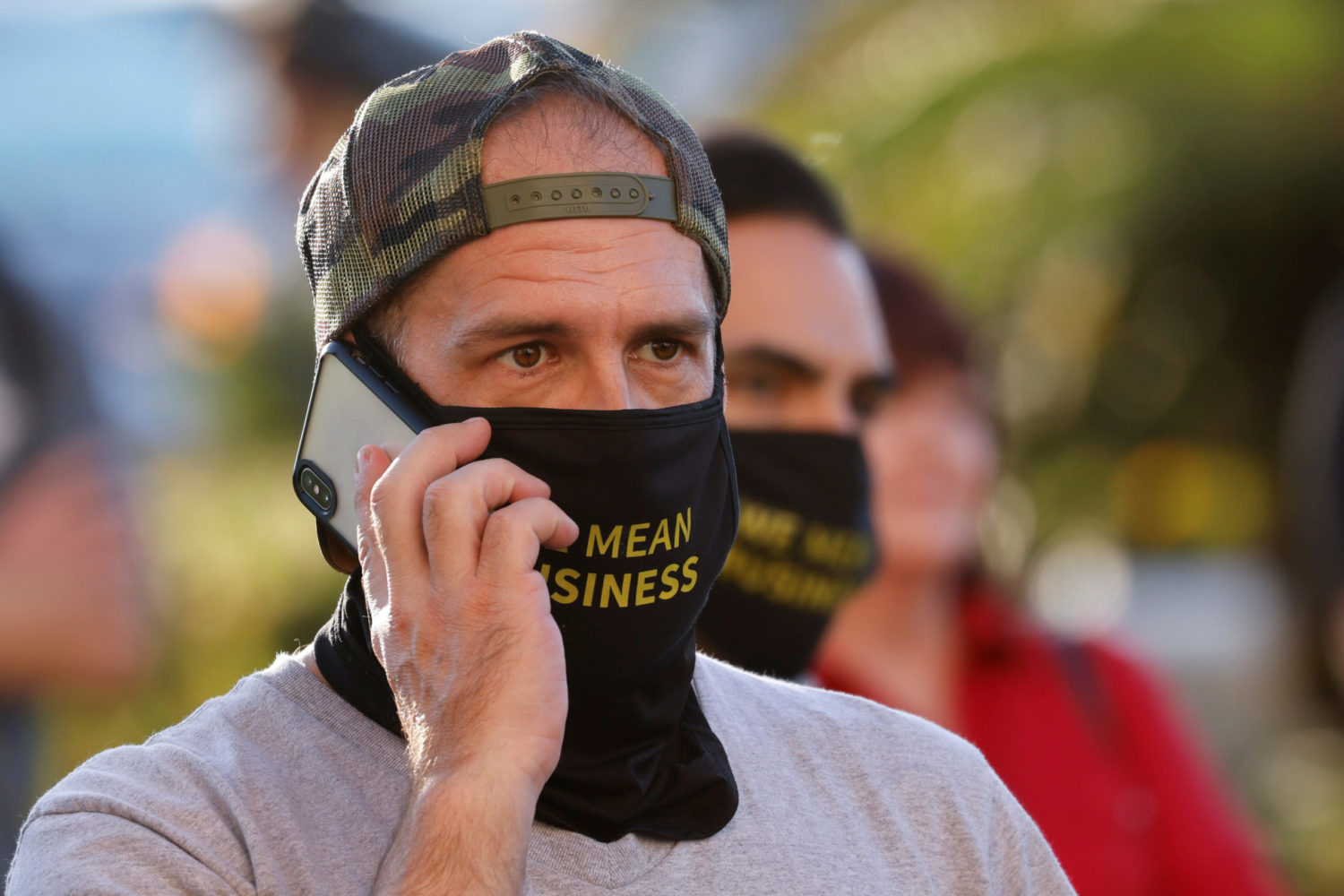 SAN FRANCISCO (Reuters) – The surge in new COVID-19 infections is driving a fresh wave of restrictions in cities and counties across the United States.

California’s “emergency brake,” Oregon’s “freeze,” Philadelphia’s “safer at home” and Minnesota’s “dial back” are among a new patchwork of rules adopted by states, cities and counties that are much less strict and far more narrow than measures imposed to stop the spread of the virus in the spring.

The overall economic bite will be smaller, too, compared to the downdraft that started earlier this year and which led to roughly 22 million people losing their jobs, a collapse in retail spending and a recession.

“I don’t see where you get a 30% hit to GDP,” said Tim Duy, an economics professor at the University of Oregon. “There’s not as much to take off the table … I’m having a hard time seeing where you are going to derail the recovery.”

Businesses that were fully shut in March, like medical offices, shops, factories, and even hair salons, will remain open in many areas this time around.

That’s in part because many Americans have changed their behavior, businesses from manufacturers to retail stores have added routine temperature checks, and face masks are more common and in many states mandated. Meanwhile, consumers have embraced online shopping and curbside delivery to keep spending.

High-frequency data backs that up: even after the latest explosion in case numbers, economic activity has not collapsed.

Many of the latest restrictions target activities where science shows the spread of the virus is the most pernicious – indoor pursuits, in close quarters, for extended periods of time, or with heavy or unmasked breathing.

That means they will hurt some already hard-hit sectors of the economy, including hospitality and entertainment. The U.S. Centers for Disease Control and Prevention on Thursday issued a strong recommendation against travel over the Thanksgiving holiday this month, though it did not ban it outright.

Many of the more than two dozen states that have issued new restrictions this week have closed or restricted indoor dining and gyms. California, the biggest state by economic output, is among that group.

At the same time, businesses shut during California’s lockdowns in the spring, including shopping malls, body waxing venues, and barber shops, can continue to operate, albeit with some limits to contain the spread of the virus.

Philadelphia’s ban on indoor dining goes into effect on Friday.

Stock Fishtown and Stock Rittenhouse, which are owned by Philadelphia-based restaurateur Tyler Akin, will shift to carry-out and delivery mode. On Monday new rules in Delaware will force him to reduce capacity at his Le Cavalier restaurant in Wilmington to 30%, down from the current 50%. Though better than being entirely closed down, as was the case in March, Akin may need to adjust staffing to fit revenue.

“We have some really hard conversations ahead of us,” he said.

Efforts to adapt business to the realities of the pandemic may allow some restaurants and bars to weather the worst effects of the restrictions. In Oakland, California, as in many cities around the country, restaurants and bars have built platforms decked out with tables, chairs and propane heaters to make customers more comfortable outside in chillier weather.

It’s “a way to keep our businesses afloat,” said Ari Takata-Vasquez, who leads a small-business alliance in Oakland that has raised money to build the outdoor dining areas for cash-strapped eateries.

She’s working on, or completed, five of them – and has 30 eateries and gyms on the waiting list.

In Minnesota, movie theaters and yoga studios will shut at midnight on Friday, along with indoor and outdoor service at eateries, pubs and gyms. Minnesota Governor Tim Walz, like many of his counterparts across the country, is also telling families not to have household gatherings, and he acknowledged the new rules will be felt especially hard by small businesses.

“By closing your doors and putting your financial well-being at risk, you are protecting the lives of your neighbors,” he said this week.

Many of the newly implemented restrictions are expected, at least for now, to last two to four weeks. But even though lockdowns will be more moderate – and in many places are simply sector-specific curfews rather than sweeping closures – business owners and employees, especially in the restaurant industry, are worried their own financial pain will be sharper.

That’s because Congress has shown little sign of delivering another round of fiscal relief, let alone the massive pandemic packages totaling some $3 trillion passed earlier this year.

The last of the extra government aid for the unemployed is due to run out at the end of this year. A bill with bipartisan support to rescue the restaurant industry is caught in limbo in Congress, as the outgoing Trump administration focuses on challenging the results of the Nov. 3 presidential election.

While households overall still have excess savings, built in part from prior government aid, for many families that money is likely to run out before a vaccine comes into widespread use.