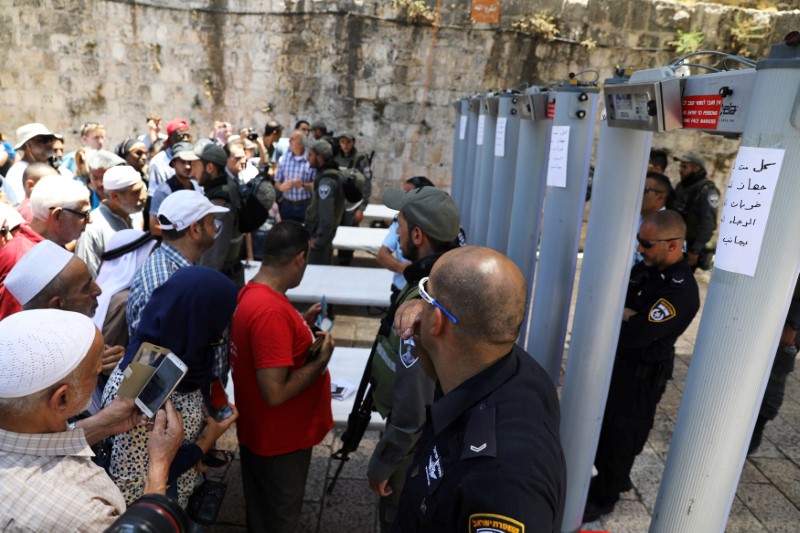 JERUSALEM (Reuters) – For 10 days, Jerusalem has been in the grip of the worst bloodshed for years over Israel’s decision to install metal detectors at the entrance to the Old City’s holy compound.

Some readers and observers have wondered how a simple matter of metal detectors – so common in so much of the world – could provoke such violence: a Palestinian man stabbed to death three members of an Israeli family in their home and three Palestinians have been shot dead by Israeli forces in clashes.

But as with anything connected to politics and religion in the Holy Land, the dispute is about much more than the security devices themselves, touching on issues of sovereignty, religious freedom, occupation and Palestinian nationalism.

Here are some answers to questions on the issue.

WHY, WHERE AND WHEN WERE THE METAL DETECTORS INSTALLED?

Israel put the devices in place on July 16, two days after two Israeli policemen were shot and killed by Israeli-Arab attackers who had concealed weapons in the compound in the heart of the Old City. It is known to Muslims as the Noble Sanctuary, where the Aqsa Mosque and the Dome of the Rock are located, and to Jews as Temple Mount, the holiest place in Judaism, where ancient temples once stood.

The detectors were put up at the entrances Muslims use to enter the compound each day for prayers. Non-Muslims are allowed to visit the area as tourists and they enter through a separate gate where metal detectors have long been used.

WHY ARE PALESTINIANS SO ANGRY ABOUT THE MOVE?

The first issue is consultation. The Palestinians say they were not informed by the Israelis about the detectors. Israel says it informed Jordan, the custodian of the holy site. Either way, the measures were imposed rapidly and had an immediate impact on Palestinians, even though Israeli-Arabs carried out the attack that prompted the installation.

Israel captured East Jerusalem, including the Old City, in the 1967 Middle East war and annexed them, a move not recognized internationally. As a result, it is to this day seen by much of the world as an occupier, and the status of the area is regarded as disputed until resolved via negotiations. Hence the Palestinians reject Israel’s authority, its heavy security presence and the unilateral move on metal detectors.

But the dispute goes deeper. For centuries, a delicate status quo has existed at the Noble Santuary-Temple Mount whereby Jews and Christians can visit, but only Muslims are allowed to pray. When Israel captured the area, it committed itself to that agreement. Yet many Palestinians are upset that more and more religious-nationalist Jews visit the compound each day, with some attempting to pray. They are usually ejected by Israeli police, but Palestinians feel the status quo is changing. The installation of metal detectors has contributed to the impression that Israel is changing the rules, a view rejected by the Israeli government.

WHAT ARE THE POLITICIANS DOING?

Prime Minister Benjamin Netanyahu is under pressure internationally to back down and remove the metal detectors, but he has resisted those calls, saying security is paramount. He is meeting senior cabinet members to examine a way forward, with signs that alternatives, such as face-recognition cameras or selective searches, might be proposed. The problem is any Israeli-led initiative is likely to be rejected by the Palestinians and possibly Jordan. So the United Nations, the United States, Europe and Russia may get involved. U.S. President Donald Trump’s regional go-between, Jason Greenblatt, is scheduled to return to the region on Monday.

On the Palestinian side, tempers are frayed. “Sovereignty over the blessed mosque is for us,” Palestinian President Mahmoud Abbas said in a speech last week. “We are the ones who should be monitoring and standing at its gates.”

Abbas has broken off security coordination with Israel, a significant move since Palestinian and Israeli forces work together daily on security in the Israeli-occupied West Bank, where Palestinians have limited self-rule.

WHAT ARE THE PEOPLE SAYING?

Israelis are wondering what all the fuss is about, commenting on Facebook and Twitter about how metal detectors are normal everywhere in the world and pointing out that Jews have to pass through them to get to the Western Wall, the holiest place where they are permitted to pray.

Palestinians see it very differently. The Noble Sanctuary has become a symbol of national aspiration, with the Dome of the Rock and Al-Aqsa mosque painted on murals all over Gaza, the West Bank and East Jerusalem. The area, a large stone and marble plaza lined with Cypress trees is one of a few open spaces for Muslims in the Old City, used for celebrations and gatherings.

“Our problem is not just the gates, our problem is the Israeli occupation,” said Walid Alhawany, 48, a shopkeeper in the Old City. “Al Aqsa Mosque is not a place where you put security gates and you feel like it’s an Israeli institution.”