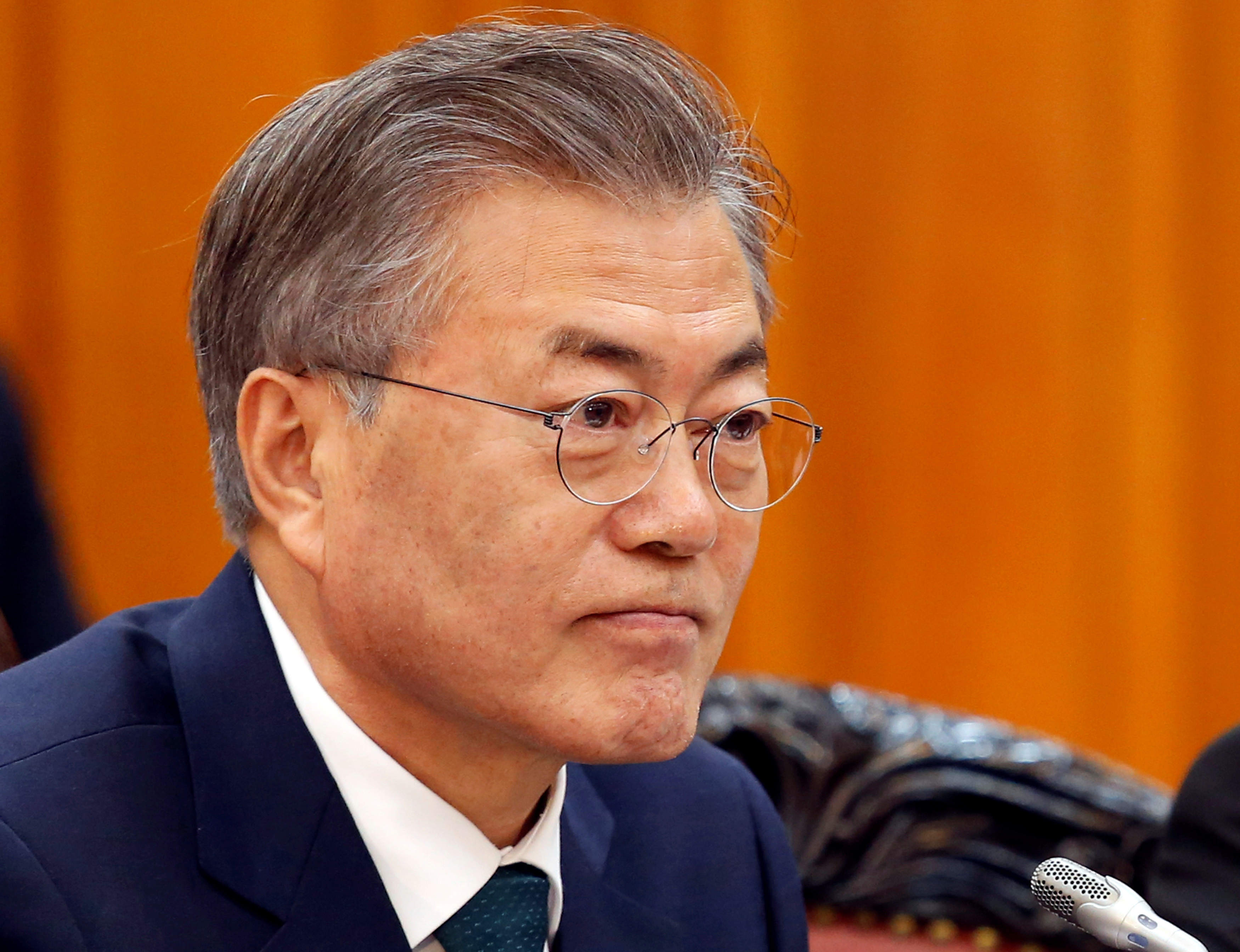 By Joyce Lee and Stephanie Nebehay

SEOUL/GENEVA (Reuters) – North Korea has expressed its commitment to “complete denuclearisation” of the Korean peninsula and is not seeking conditions, South Korean President Moon Jae-in said on Thursday, as the United States vowed to maintain “maximum pressure” on Pyongyang.

“I don’t think denuclearisation has different meanings for South and North Korea. The North is expressing a will for a complete denuclearisation,” Moon said during a lunch with chief executives of Korean media companies.

“They have not attached any conditions that the U.S. cannot accept, such as the withdrawal of American troops from South Korea. All they are talking about is the end of hostile policies against North Korea, followed by a guarantee of security.”

North Korea has defended its nuclear and missile programmes, which it pursues in defiance of U.N. Security Council resolutions, as a necessary deterrent against perceived U.S. hostility. The United States stations 28,500 troops in South Korea, a legacy of the 1950-53 Korean War.

South Korea announced on Wednesday that it is considering how to change a decades-old armistice with North Korea into a peace agreement as it prepares for the North-South summit this month.

Reclusive North Korea and the rich, democratic South are technically still at war because the 1950-53 conflict ended in a truce, not a peace treaty.

Moon said he saw the possibility of a peace agreement, or even international aid for the North’s economy, if it denuclearises.

But he also said the inter-Korean summit had “a lot of constraints”, in that the two Koreas could not make progress separate from the North Korea-United States summit, and could not reach an agreement that transcends international sanctions.

“So first, the South-North Korean summit must make a good beginning, and the dialogue between the two Koreas likely must continue after we see the results of the North Korea-United States summit,” Moon said.

U.S. CIA Director Mike Pompeo visited North Korea last week and met leader Kim Jong Un with whom he formed a “good relationship”, U.S. President Donald Trump said on Wednesday, ahead of a summit planned for May or June.

Trump said on Wednesday he hoped the summit would be successful, but warned he would call it off if he did not think it would produce results.

Trump told a joint news conference with Japanese Prime Minister Shinzo Abe that his campaign of “maximum pressure” on North Korea would continue until Pyongyang gave up its nuclear weapons.

“The United States remains committed to complete, verifiable and irreversible denuclearisation of North Korea,” U.S. Disarmament Ambassador Robert Wood told a news conference in Geneva on Thursday ahead of a two-week conference on the Nuclear Non-Proliferation Treaty.

“In terms of the pressure campaign, the things we have been very interested in are maintaining the pressure, meaning enforcing sanctions, ensuring that the North is not able to get access to funds that help further its nuclear and ballistic missile programmes.”

North Korea must show that it is “serious about getting rid of its nuclear weapons programme” and take “concrete steps”, Wood said, adding: “But we’ve got a long way to go”.

“China supports ending the war state on the peninsula at an early date,” she said. “As a party involved in the peninsula issue, China is willing to play an active role.”

Six top South Korean officials will accompany Moon to the summit, including his chief of staff, spy chief, national security adviser and unification, defence and foreign ministers, the spokesman said.

The meeting was convened to discuss and decide “policy issues of a new stage” to meet the demands of the current “important historic period”, KCNA said.

(Additional reporting by Heekyong Yang and Soyoung Kim in SEOUL and Michael Martina in BEIJING; Editing by Matthew Mpoke Bigg)