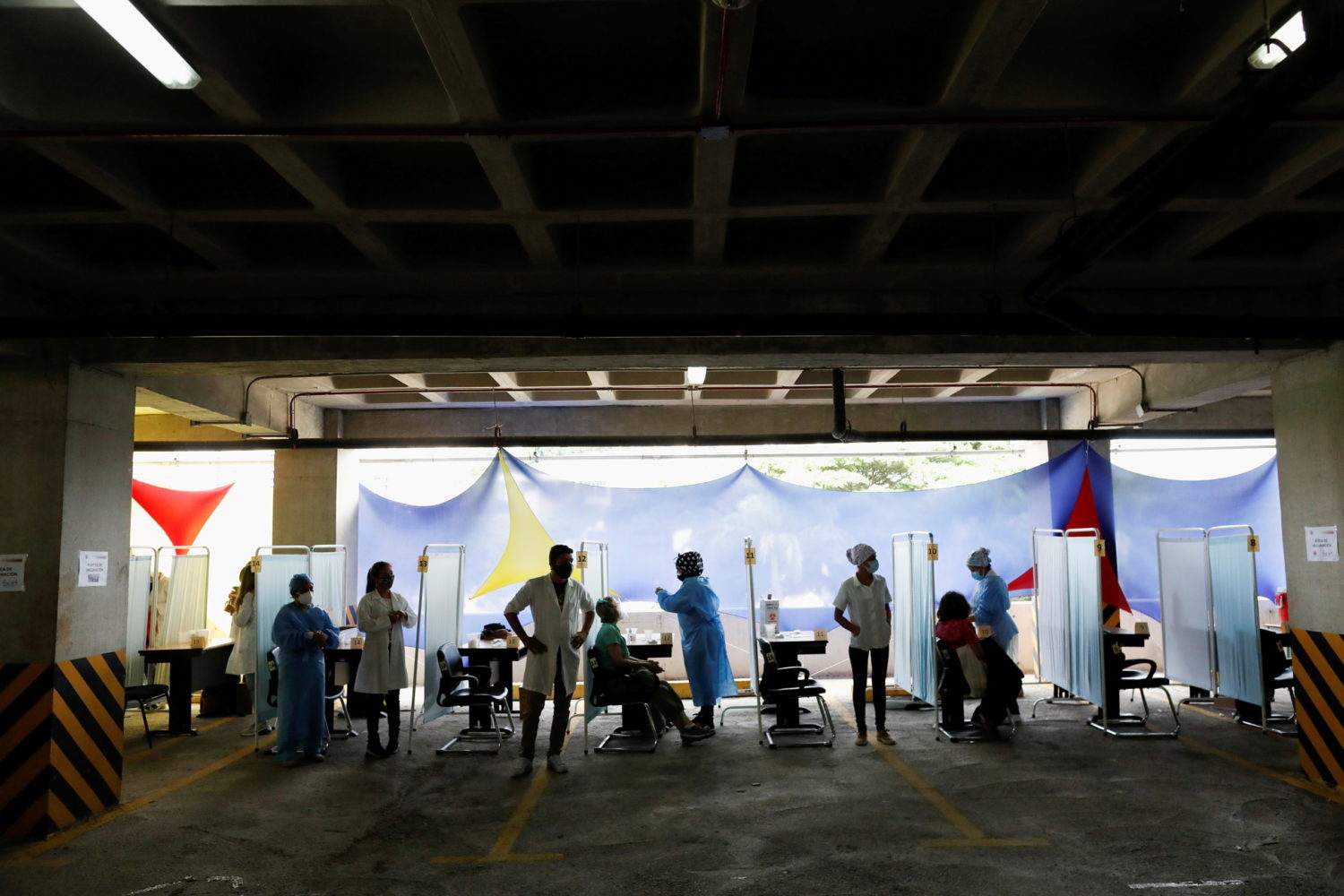 CARACAS (Reuters) – The COVAX vaccine-sharing facility is aiming to overcome roadblocks to the shipment of coronavirus shots to Venezuela “as soon as possible,” a spokesman for the GAVI alliance said on Tuesday.

The comments from GAVI, the Vaccine Alliance which runs COVAX with the World Health Organization, came after President Nicolas Maduro on Sunday said he was giving the COVAX system an “ultimatum” to send doses to the crisis-stricken South American country or return the money Venezuela had already paid.

Officials from the OPEC nation said in June that several payments to cover the $120 million fee have been made, but that the final four payments have been blocked by Swiss bank UBS. Maduro’s allies have attributed that to U.S. sanctions aimed at ousting him from the presidency.

“We are working to resolve this matter as quickly as possible,” a GAVI spokesperson said.

Washington in 2019 blacklisted Venezuela’s state oil company, central bank and other government institutions, though it exempts humanitarian transactions from the sanctions.

Still, the measures have left many banks wary of processing even authorized Venezuela-related transactions.

Venezuela’s COVAX payments are not subject to any sanctions, but pose compliance problems for UBS because the government has not satisfactorily spelled out to the bank exactly what the payment is for, a person familiar with the matter said, adding that UBS will execute the transaction as soon as the open questions are clarified.

Venezuela’s information ministry did not immediately respond to a request for comment.

Several of the payments to COVAX were made by local Venezuelan banks on the government’s behalf, Reuters reported last month.

Venezuela has received 3.5 million vaccine doses from allies Russia and China, and is also conducting trials for Cuba’s Abdala vaccine. 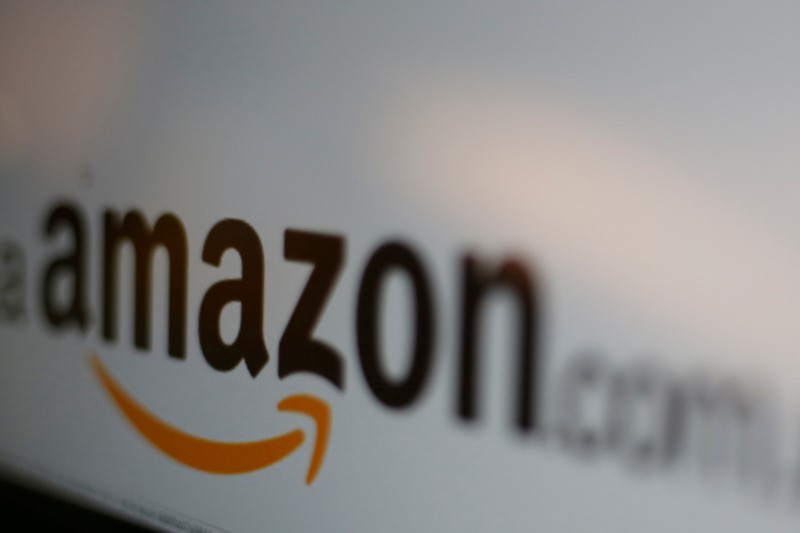 (Reuters) – Amazon.com Inc said on Monday it was investigating suspected internal leaks of confidential information by its employees for bribes to remove fake reviews and other seller scams from its website.

Amazon employees are offering internal data and other classified information through intermediaries, to independent merchants selling their products on the site to help them boost sales in return for payments, the Wall Street Journal reported on Sunday, citing sources.

The practice, which is a violation of the company’s policy, is particularly strong in China, the report added, as the number of sellers there are soaring.

“We hold our employees to a high ethical standard and anyone in violation of our code faces discipline, including termination and potential legal and criminal penalties,” a company spokesperson told Reuters.

Brokers for Amazon employees in Shenzhen are offering internal sales metrics and reviewers’ email addresses, as well as a service to delete negative reviews and restore banned Amazon accounts in exchange for payments ranging from about $80 to more than $2,000, the WSJ report said.

The e-commerce giant is also investigating a number of cases involving employees, including some in the U.S., suspected of accepting these bribes, according to the Journal report.

(Reporting by Arjun Panchadar in Bengaluru; Editing by Shounak Dasgupta) 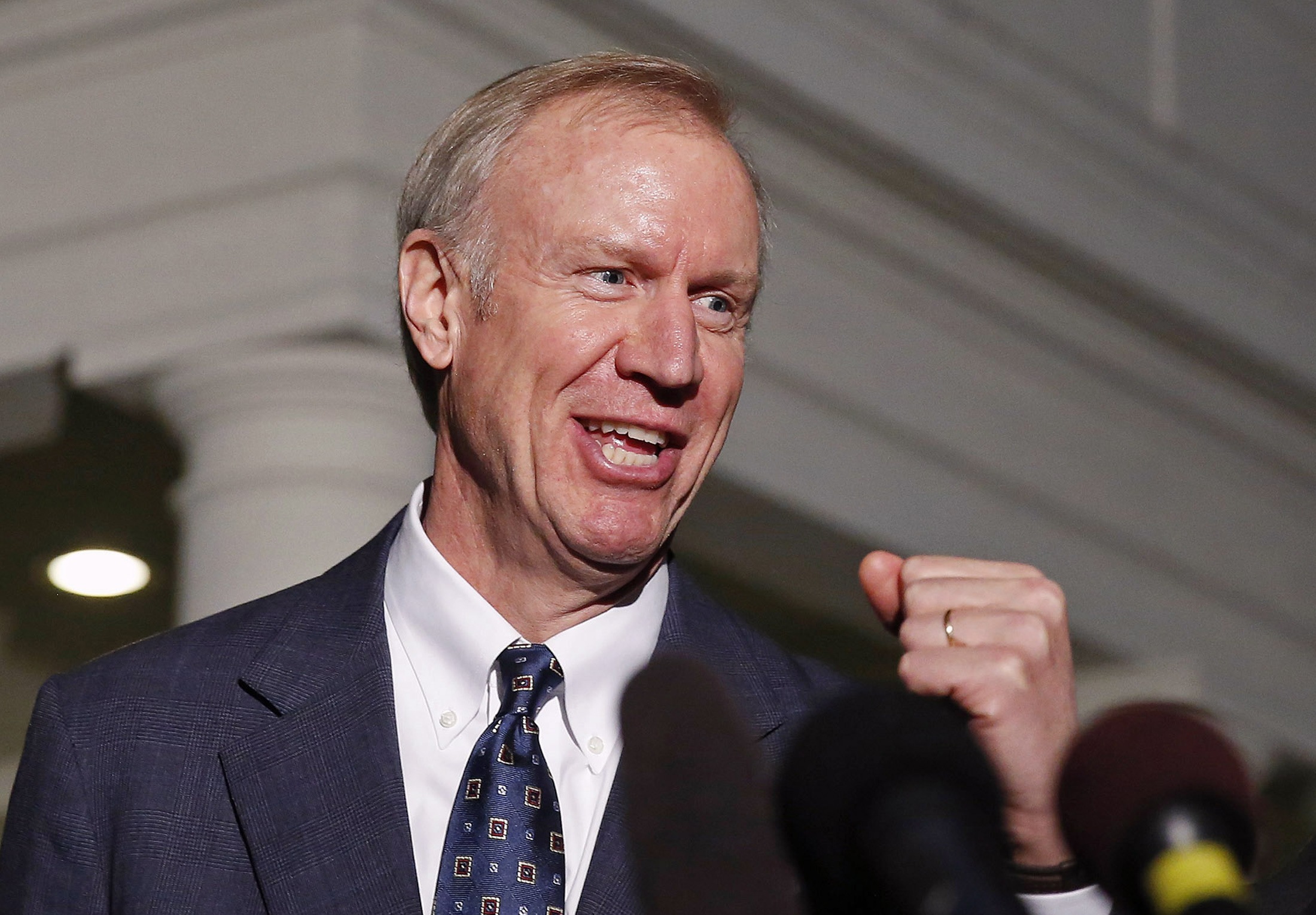 By Dave McKinney and Karen Pierog

CHICAGO (Reuters) – Illinois owes a handful of financial consortia more than $118 million under an obscure program intended to speed up overdue payments to the cash-strapped state’s vendors, an analysis of state records shows.

Political feuding between Republican Governor Bruce Rauner and Democrats who control the legislature has kept Illinois without a full operating budget since July 2015, contributing to a doubling of the unpaid bills backlog. The amount of overdue bills could reach $13.5 billion, or 40 percent of available operating revenue, when the current fiscal year ends June 30, the Rauner administration has projected.

Come fiscal 2022, the backlog is projected to balloon to $47 billion. No other U.S. state defers payments to the extent Illinois does to manage cash flow, credit-rating analysts said.

The one-of-its-kind, bill-payment program seeks to avert the nightmare scenario for a state in the worst financial shape in the country: a shutdown of essential services such as employee health insurance, a disruption of prison food supplies or mothballing of state trooper cars in need of fuel and maintenance.

“I don’t think there is any other alternative for us,” Illinois Central Management Services Director Michael Hoffman told a legislative panel in May.

But it comes at a heavy cost with unlimited late-payment fees now approaching 20 percent in some cases for Illinois’ cash-strapped government, whose general obligation (GO) low-investment grade credit ratings are the lowest among U.S. states.

“No other state or business would operate by incurring obligations to its vendors and setting up a third-party payment structure that dramatically inflates the costs of those services,” said Laurence Msall, president of the Chicago-based Civic Federation, a non-partisan government watchdog.

Under the Vendor Support Initiative (VSI) program launched last year to replace a similar plan introduced in 2011, state vendors can get paid without delay 90 percent of what they are owed by state-designated financial lenders.

When the state finally pays, the vendors get the final 10 percent, while the lenders keep the late-penalty fees. In Illinois, receivables more than 90 days past due accumulate interest at a rate of 1 percent per month.

For the lenders, the risk is that the state will not pay up and they will need to fight for compensation in courts, but that has not happened yet.

The firms include financial institutions such as Citibank N.A. <C.N> and Bank of America Corp <BAC.N>, a distressed debt investor tied to a Rauner campaign donor, and political insiders, including Hillary Clinton’s 2008 campaign manager and a former two-term Republican Illinois governor.

“Our money is flowing into the market, helping the wheels of commerce to keep working,” he said.

Citi and Bank of America declined to comment for this story and representatives from the largest state-qualified buyer of receivables, Chicago-based Vendor Assistance Program, and some of its investors did not respond to interview requests.

Fees on unpaid bills in the program have been growing by more than $2.6 million per week and could exceed $194 million by June 30, according to a Reuters analysis of state data as of Sept. 28.

By the end of Rauner’s term in January 2019, total interest on unpaid receivables in the program could exceed $351 million if there is no progress in reducing the bill backlog, Reuters calculations show. (Graphic: http://tmsnrt.rs/2fW1vxj)

That total represents more than what Illinois allocated in operating funds last June to keep seven of its nine public universities open for six months.

As of late September, four participating VSI lenders had bought 15,369 unpaid receivables worth $1.12 billion under the program. Late-payment penalties on those billings surpassed $118 million and continue to grow, Reuters has found.

Illinois law places no limit on how long the late fees can accrue and since 2010 the state has spent about $929 million in late-payment penalties, according to state comptroller data.

Three of the four firms now involved also took part in a similar program launched under previous Democratic Governor Pat Quinn. Its current version has sparked questions over how firms were vetted, a lack of up-to-date disclosures about their owners and financing, and patchy accounting of vendor payments.

Additionally, state business registration of one of the firms, Payplant LLC, expired two months before the program’s launch, according to the Illinois secretary of state’s office. A company representative blamed “a procedural lapse” and said it had begun the process in October to reinstate its LLC status.

“The focus should be on transparency,” said Illinois Treasurer Michael Frerichs, a Democrat. “If we have a program like this, we don’t want to turn it over to loan sharks.”

Using the state data, Reuters calculated the average rate on late payments at 8.14 percent through late September. During that same period, the Dow Jones Industrial Average only gained 3.65 percent.

“It seems that (it) creates a real perverse incentive for them to wait as long as they can,” Democratic Representative Elaine Nekritz said about the buyers of vendor invoices.

“Do you want to get nothing or 90 percent now and the other 10 percent later?” said Victor Dickson, the group’s president and CEO. “We chose, ‘Let’s get 90 percent and keep serving our clients.’” 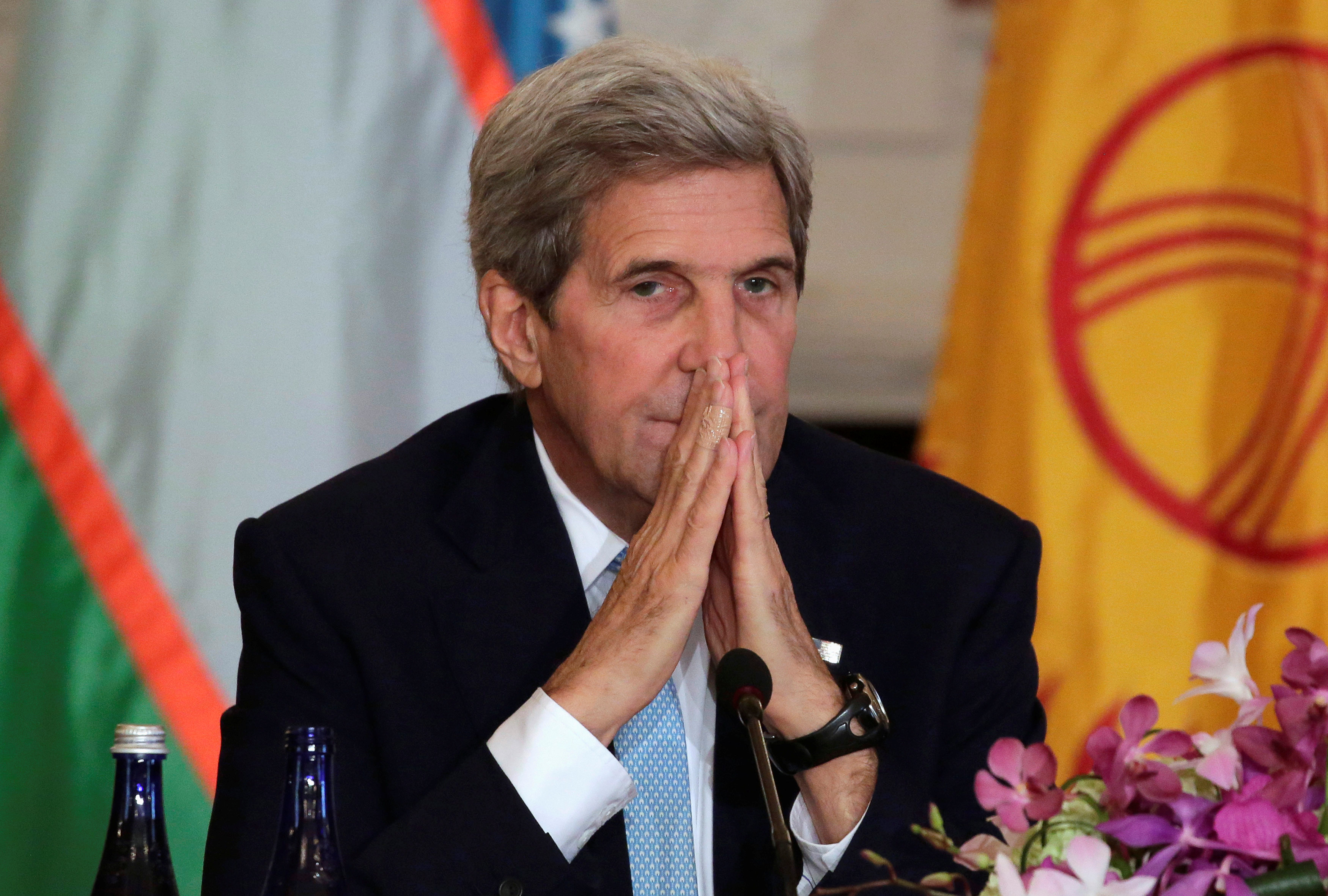 BUENOS AIRES (Reuters) – U.S. Secretary of State John Kerry on Thursday defended the Obama administration’s payment of $400 million in cash to Iran, denying it was a ransom for the release of American prisoners by Tehran.

“The United States does not pay ransoms,” Kerry told a news conference in the Argentine capital Buenos Aires. He said the payment, which was part of a longstanding Iranian claim at the Iran-US Claims Tribunal in The Hague, was negotiated on a separate track from the Iran nuclear deal.