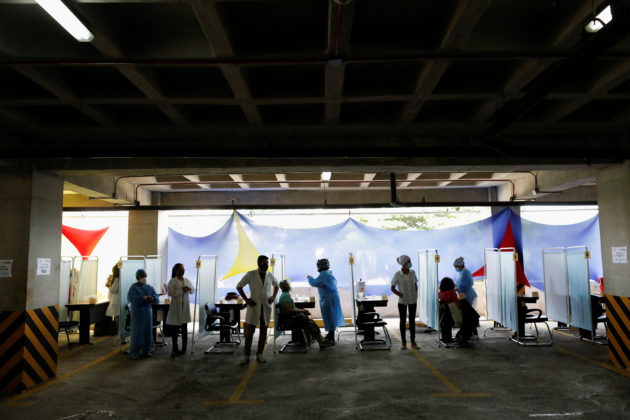 People receive their first dose of Russia's Sputnik V vaccine against the coronavirus disease (COVID-19), in the parking lot of the Social Security Institute of the Armed Forces, turned into a mass vaccination centre, in Caracas, Venezuela June 5, 2021. REUTERS/Leonardo Fernandez Viloria TPX IMAGES OF THE DAY

CARACAS (Reuters) – The COVAX vaccine-sharing facility is aiming to overcome roadblocks to the shipment of coronavirus shots to Venezuela “as soon as possible,” a spokesman for the GAVI alliance said on Tuesday.

The comments from GAVI, the Vaccine Alliance which runs COVAX with the World Health Organization, came after President Nicolas Maduro on Sunday said he was giving the COVAX system an “ultimatum” to send doses to the crisis-stricken South American country or return the money Venezuela had already paid.

Officials from the OPEC nation said in June that several payments to cover the $120 million fee have been made, but that the final four payments have been blocked by Swiss bank UBS. Maduro’s allies have attributed that to U.S. sanctions aimed at ousting him from the presidency.

“We are working to resolve this matter as quickly as possible,” a GAVI spokesperson said.

Washington in 2019 blacklisted Venezuela’s state oil company, central bank and other government institutions, though it exempts humanitarian transactions from the sanctions.

Still, the measures have left many banks wary of processing even authorized Venezuela-related transactions.

Venezuela’s COVAX payments are not subject to any sanctions, but pose compliance problems for UBS because the government has not satisfactorily spelled out to the bank exactly what the payment is for, a person familiar with the matter said, adding that UBS will execute the transaction as soon as the open questions are clarified.

Venezuela’s information ministry did not immediately respond to a request for comment.

Several of the payments to COVAX were made by local Venezuelan banks on the government’s behalf, Reuters reported last month.

Venezuela has received 3.5 million vaccine doses from allies Russia and China, and is also conducting trials for Cuba’s Abdala vaccine.