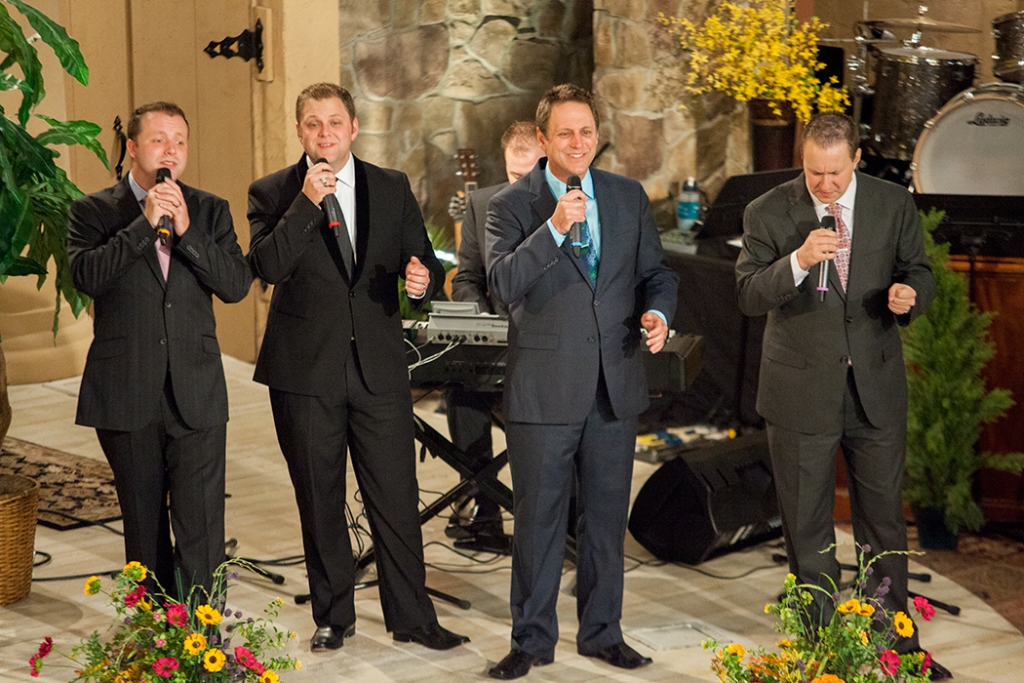 For decades, the LeFevres blazed new trails in Gospel Music, turning out songs and singers that would become legendary. Their award winning music allowed them to sing for Presidents and Dignitaries of the world. We are all looking forward to their return to the Jim Bakker Show on Tuesday, December 1st here at Morningside!

Gospel Music fans voted for them to receive their 2006 Horizon Group of The Year award. In 2007, the group was voted “Breakout Artist of The Year” in the Southern Gospel News Awards and in 2009, their song, “Big Mighty God” was nominated for a Dove Award.

The LeFevre Quartet is on a mission and ready for God to use them in a mighty way to share the hope of Christ with a nation in desperate need of a Savior! We hope you are able to join us December 1st at 11:30am CT on Grace Street as we enjoy the powerful, joyful voices of The LeFevre Quartet! Or watch us via live feed on Jimbakkershow.com/watch-us-live.

The MVP of the 2015 NBA Finals says that his team is “full of believers” and thanked God for his win of the award.

“(We’ve) got a team full of believers. We all say God has a way for you and a purpose for you,” Iguodala, 31, said after receiving the MVP honor. “I want to be just like Steph (Curry) when I grow up — just a God fearing man.”

Stephen Curry of the Warriors, the NBA regular season MVP, has routinely given God glory for his success.

“Sometimes people make it seem like you have to have certain prerequisites or a crazy life story in order to be successful in this world. But the truth is you really don’t,” Curry said after accepting his MVP trophy earlier this year. “It doesn’t matter where you come from, what you have or don’t have, what you lack or what you have too much of. But all you need to have is faith in God, an undying passion for what you do and what you choose to do in this life, and a relentless drive and the will to do whatever it takes to be successful in whatever you put your mind to.”

Curry wrote earlier this year in a piece for the Fellowship of Christian Athletes the depth of Christ’s influence on his team:

“Fast-forward to now—my fourth year with the Warriors—and my faith continues to be my driving force. God’s blessed me with an awesome support system in Oakland, starting with my head coach, Mark Jackson, who is a pastor of a congregation in Southern California. It’s rare to have such an outspoken believer leading an NBA team. We also have about 10 guys on our team who attend our pregame chapels and pray together before games,” he wrote.

Curry and Iguodala helped the Warriors win their first NBA title since 1975 on Tuesday night with a 105-97 win over the Cleveland Cavaliers.

A celebration of the risen Lord stood boldly in the nation’s capital Sunday as over 7,000 Christians gathered at the Lincoln Memorial at sunrise.

The service, organized by Capital Church in nearby Vienna, Virginia, began at 6:30 a.m. and latest an hour and a half.  Worship was lead by Newsboys lead singer Michael Tait plus a choir, orchestra and band.

“Washington, D.C. is arguably the one most influential cities in the world and I do believe it is important in the heart of the most influential city of the world to declare on Easter morning our faith in the risen Lord,” Capital Church Pastor Amos Dodge told The Christian Post. “I think it is important to reclaim some of our own spiritual heritage and we do that from the steps of the Lincoln Memorial and declare our faith and trust in Jesus Christ, who died and rose again.”

Dodge’s sermon focused on the fact that Christianity is the only religion in the world where their God is not dead.

“Christianity is unique in that we know that Muhammad may have said some wonderful things and done some wonderful things, but he is in a tomb. Confucius was noted for wise sayings but nobody has heard from him in a long, long time,” Dodge declared. “When you compare the claims of Jesus Christ to all the religions in the world, no other religion has a risen savior, the one who came back from the dead.”

“You can trust a man who died for you,” Dodge continued. “Jesus died for us and then came back from the grave.”

The Easter Sunrise Service at the Lincoln Memorial began in 1979.  Pastor Dodge had been walking past the Lincoln reflecting pool during a spring day and God gave him the vision of the service.  The first service had 150 people in attendance.

This year, the service welcomed Christians from all 50 states.

The annual See You At The Pole event today brought millions of youth around the world together for a time of prayer, praise and petitioning God for the schools’ safety and well-being for the upcoming year.

The event had a humble beginning in the town of Burleson, Texas in the early 1990s and now takes place in all 50 states and over 20 countries around the world.

“A small group of teenagers in Burleson, Texas, came together for a DiscipleNow weekend in early 1990,” the See You At The Pole website explains. “On Saturday night their hearts were penetrated like never before, when they became broken before God and burdened for their friends. Compelled to pray, they drove to three different schools that night. Not knowing exactly what to do, they went to the school flagpoles and prayed for their friends, schools, and leaders. Those students had no idea how God would use their obedience.”

Every year has a theme, with this year’s theme based on Ephesians 6:18, “Never Stop Praying.”

The Alliance Defending Freedom had been active in the days leading up to the event, providing students with information for administrators that might try to stop them from praying.

“Students don’t abandon their constitutional freedoms at the schoolhouse gate,” said ADF Senior Legal Counsel Jeremy Tedesco. “They continue to have the freedom to peacefully express their beliefs while at school, and that certainly includes prayer. The First Amendment protects freedom of speech for all students, regardless of the students’ religious or political beliefs.”

In these days where Christians in the Armed Forces are coming under attack, it’s rare that a video with troops praising God is able to gain attention let alone not be stopped by anti-Christian groups.

A video of almost 500 Marines at Marine Corps Base Camp Pendleton performing the song “Days of Elijah” is flying around the internet obtaining millions of views.

The troops loudly proclaim, “There is no God like Jehovah” and even shout “oorah!” to emphasize some points of the song declaring the one and true God.

“I’m really happy that this video has gone viral, but the thing that I’m hoping for is that I want people to pray for our troops. That’s my intention. I want more people praying for our troops because there is so much bad news in the media that I want people seeing something positive,” Merrie Baldwin, a volunteer who posted the video, told The Christian Post.  “We do prayer request cards with them and the majority of them are very concerned with ISIS right now.”

The worship services and outreach began as an offshoot of a Christmas activity from Arbor Christian Fellowship Church in Lake Forrest, California.  They would provide gifts and baked goods for the soldiers away from their home on the holidays.

“Every second Sunday we go down and the Saturday before I bake thousands of cookies. So I bring cookies with me because most of the guys are homesick and missing their moms or wives,” Baldwin said.  “I give them a bag of cookies and we have the church service, and my husband and I stand at the back and we are just there available if they need counseling or just want to talk to somebody ’cause they are homesick or to pray with them.”