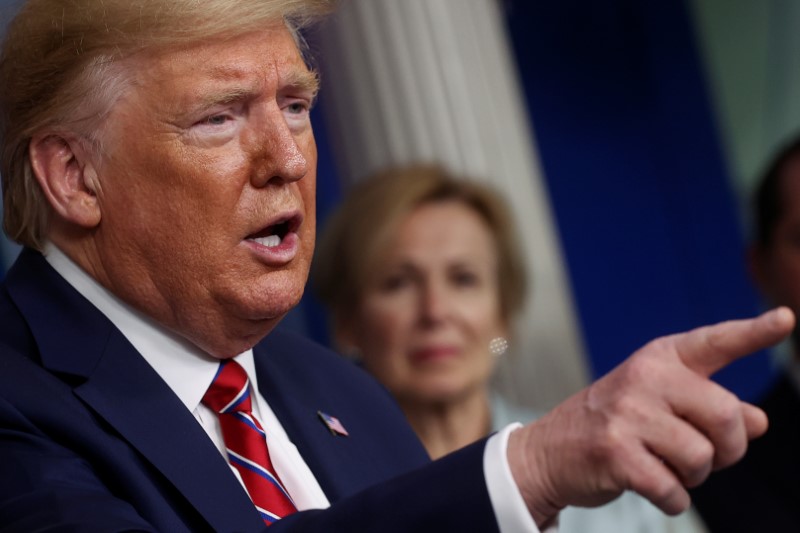 In a contentious press briefing, the Republican president lashed out at an NBC reporter who noted Trump’s tendency to put an optimistic spin on the situation and asked what his message was to the American people who may be scared.

“I say that you’re a terrible reporter. I think that is a nasty question,” Trump said.

Two of the nation’s most populous states – California and New York – have enacted their toughest restrictions yet affecting some 60 million people, while federal authorities this week moved to close the borders with Canada and Mexico. More than 200 people have died in the United States and over 14,000 cases of the highly contagious respiratory illness had been confirmed by Friday.

Trump and top administration officials for weeks downplayed the outbreak, which began in China in December, before shifting their tone about the severity of the health crisis more recently.

The president, who is running for re-election on Nov. 3, has long sparred with the media, blasting coverage of him as “fake news” and “hoaxes,” and slamming news outlets and journalists on his Twitter feed. His re-election campaign also recently filed lawsuits against several outlets, including the New York Times and the Washington Post.

Yet the crises has propelled Trump recently to give briefings with news outlets nearly every day in the White House briefing room, a place he eschewed during his first three years in office.

On Friday, in a particularly unusual twist, Trump’s first White House press secretary, Sean Spicer, attended the briefing and asked a question in his role working for Newsmax. Spicer repeatedly sparred with reporters during his time as a spokesman early in Trump’s term.

During his recent engagements with the press, Trump has sought to display unabashed optimism despite more sober comments from public health officials, medical experts, state governors and others who have sounded the coronavirus alarm.

One reporter on Thursday asked about the impact on the economy as many businesses have had to dramatically shift operations or shut down entirely during drastic measures to slow the spread of the virus.

“Thanks for telling us. We appreciate it,” Trump said. “What’s the rest of your question? We know that. Everybody in the room knows that.”

Asked last week about his role regarding the disbanding of a National Security Council pandemic preparedness team on his watch, Trump told a PBS reporter: “That’s a nasty question… When you say me, I didn’t do it.” 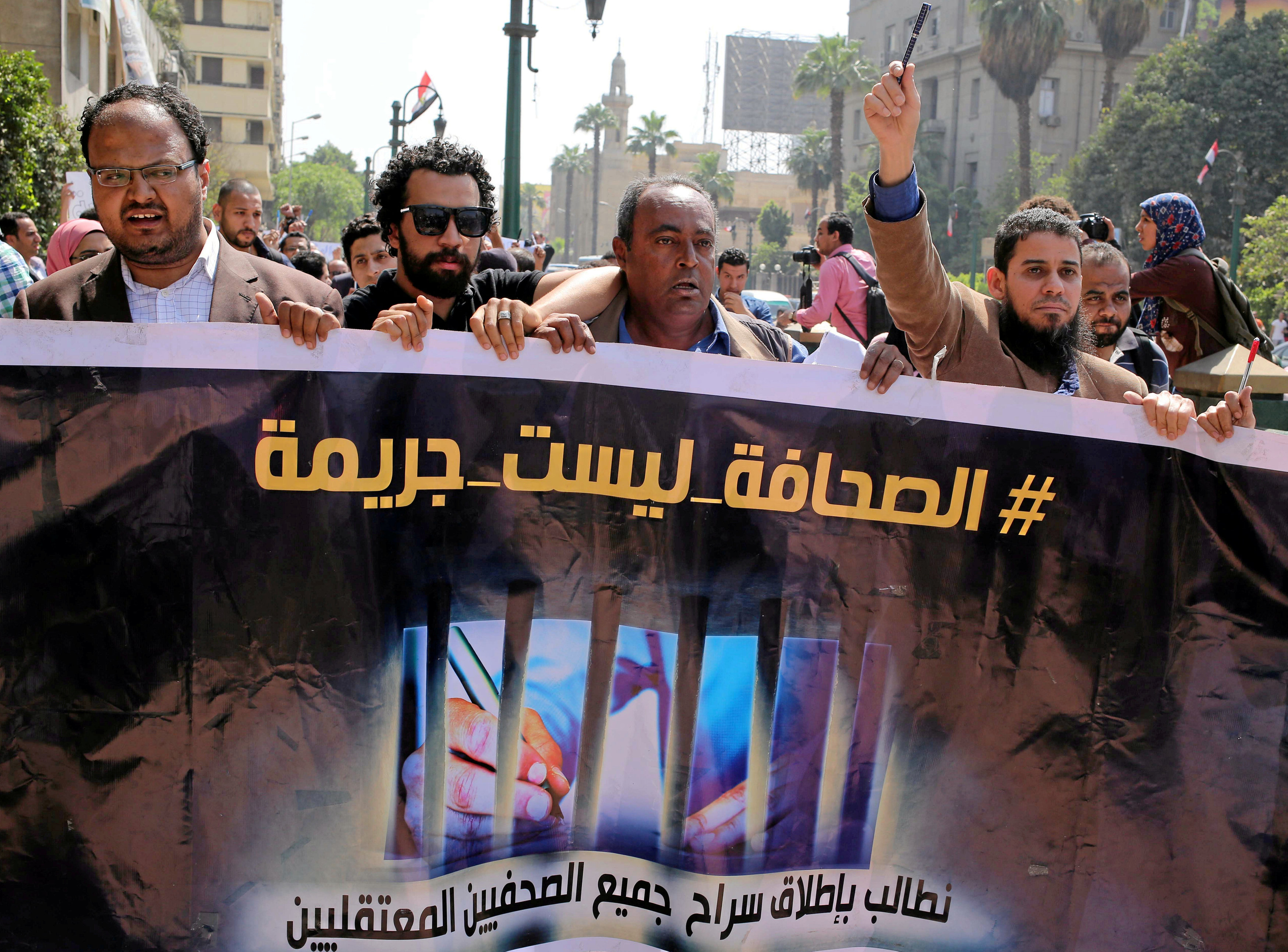 By Eric Knecht and Nadine Awadalla

CAIRO (Reuters) – An often fiery government critic, Egyptian journalist Khaled al-Balshi has been arrested, had his operations monitored, and staff harassed by police for years. Yet his website Al-Bedaiah, a rare dissident voice in Egypt, had never been touched.

On Sunday that changed when it suddenly went blank with no warning after being blocked, part of what Balshi called an unprecedented and far-reaching state crackdown on scores of news websites in recent weeks.

“Let’s be clear, the Egyptian websites going through this are dealing with a long-term shutdown — this is not short term,” said Balshi from his downtown Cairo office, where four work stations sat idle, because staff feared coming to work in case of arrest.

Balshi’s website was the 57th blocked since May 24, according to the Association for Freedom of Thought and Expression, a non-government organization tracking the affected sites through software that monitors outages.

Journalists see the campaign against them as a step toward banning all but the most state-aligned media, effectively reversing the private media boom that flourished in the final decade of former president Hosni Mubarak’s rule and which they say helped push him from power in 2011.

The spike in censorship has come as a surprise, even to journalists long-accustomed to reporting within strict red lines in Egypt where direct criticism of the military, the president, and judiciary are considered taboo and punishable by jail time.

The government has offered no comment on the reason behind the blockages and the Ministry of Communication and Information Technology had no immediate comment.

Makram Mohamed Ahmed, head of the newly formed Supreme Media Council, a state media regulator, told Reuters he believes “the main reason is how much [these websites] deal with the Muslim Brotherhood or express support for terrorism,” referring to the Islamist group whose president Mohamed Mursi held office for a year before being ousted in 2013 by the military after mass protests.

But the blockages have also hit Mada Masr, a self-described progressive outlet with no Islamist ties, as well as the widely read Al-Borsa, a financial newspaper favored by the largely pro-government business community.

“If they did something more grave like arresting team members or me it would make big noise, whereas blocking the website is the best way to paralyze us without paying a high price for it,” Lina Atallah, editor of Mada Masr, told Reuters.

Some journalists say a presidential election in 2018 means Egypt is doubling down on press restrictions, a move intended to ensure opposition candidates have few spaces to challenge general-turned-president Abdel Fattah al-Sisi, who is widely expected to run for a second term.

“There are people getting ready to nominate themselves for the presidency and they have to make their voices heard or else they won’t be competitive,” said Adel Sabry, the editor-in-chief of Masr al-Arabia, a website blocked last month.

“[The goal] is that it’s just one voice,” said editor-in-chief of Al-Borsa, Hussein Abd Rabo, who said his paper could be closed any day.

FILE PHOTO: Masked Egyptian security forces walk by a demonstration held by journalists and activists against the detention of journalists, in front of the Press Syndicate in Cairo, Egypt April 26, 2016. REUTERS/Mohamed Abd El Ghany/File Photo

When Balshi’s website was wiped from Egyptian screens seven of its eight most read articles dealt with the same hot-button issue: a controversial accord transferring two Red Sea islands to Egypt’s top benefactor, Saudi Arabia. The measure is expected to be voted on within days by parliament.

Like another website blocked on Sunday, El Badil, Balshi’s has provided a platform for critics of the deal who argue that the islands are Egyptian territory, a point of view that sparked rare street protests last year calling for the accord’s cancellation.

Balshi and other journalists believe the wave of censorship is meant to neutralize debate on an issue that opposition figures say has already eroded some of Sisi’s support among voters who consider ceding sovereign territory unacceptable.

“I insist that we remain a voice, no matter what. And that we try to preserve our space. I think it should be done even as a suicide mission,” said Balshi. “What can we do?”

A disgraced journalist has published a piece smearing Christians that Newsweek has run on the cover of their magazine at Christmas.

The article, called “The Bible: So Misunderstood It’s a Sin”, was written by Kurt Eichenwald, a reporter who left the New York Times shortly before it was discovered he had given thousands of dollars to a source for a story he had written on child pornography.  In the piece, Eichenwald smears Christians who follow Scripture.

“They are God’s frauds, cafeteria Christians who pick and choose which Bible verses they heed with less care than they exercise in selecting side orders for lunch,” Eichenwald wrote. “They are joined by religious rationalizers—fundamentalists who, unable to find Scripture supporting their biases and beliefs, twist phrases and modify translations to prove they are honoring the Bible’s word.”

Christian leaders across the country immediately responded to the hit piece timed to hit shelves during one of the most holy times of the year for Christians.

“Newsweek’s cover story is exactly what happens when a writer fueled by open antipathy to evangelical Christianity tries to throw every argument he can think of against the Bible and its authority,” Southern Baptist leader Albert Mohler wrote in an article entitled “Newsweek on the Bible: So Misrepresented It’s a Sin.” Oddly enough, Kurt Eichenwald’s attack on evangelical Christianity would likely be a measure more effective had he left out the personal invective that opens his essay and appears pervasively. He has an axe to grind, and grind he does.”

“But the authority of the Bible is not the victim of the grinding. To the contrary, this article is likely to do far more damage to Newsweek in its sad new reality,” Mohler continued. “To take advantage of Newsweek’s title—it so misrepresents the truth, it’s a sin.”