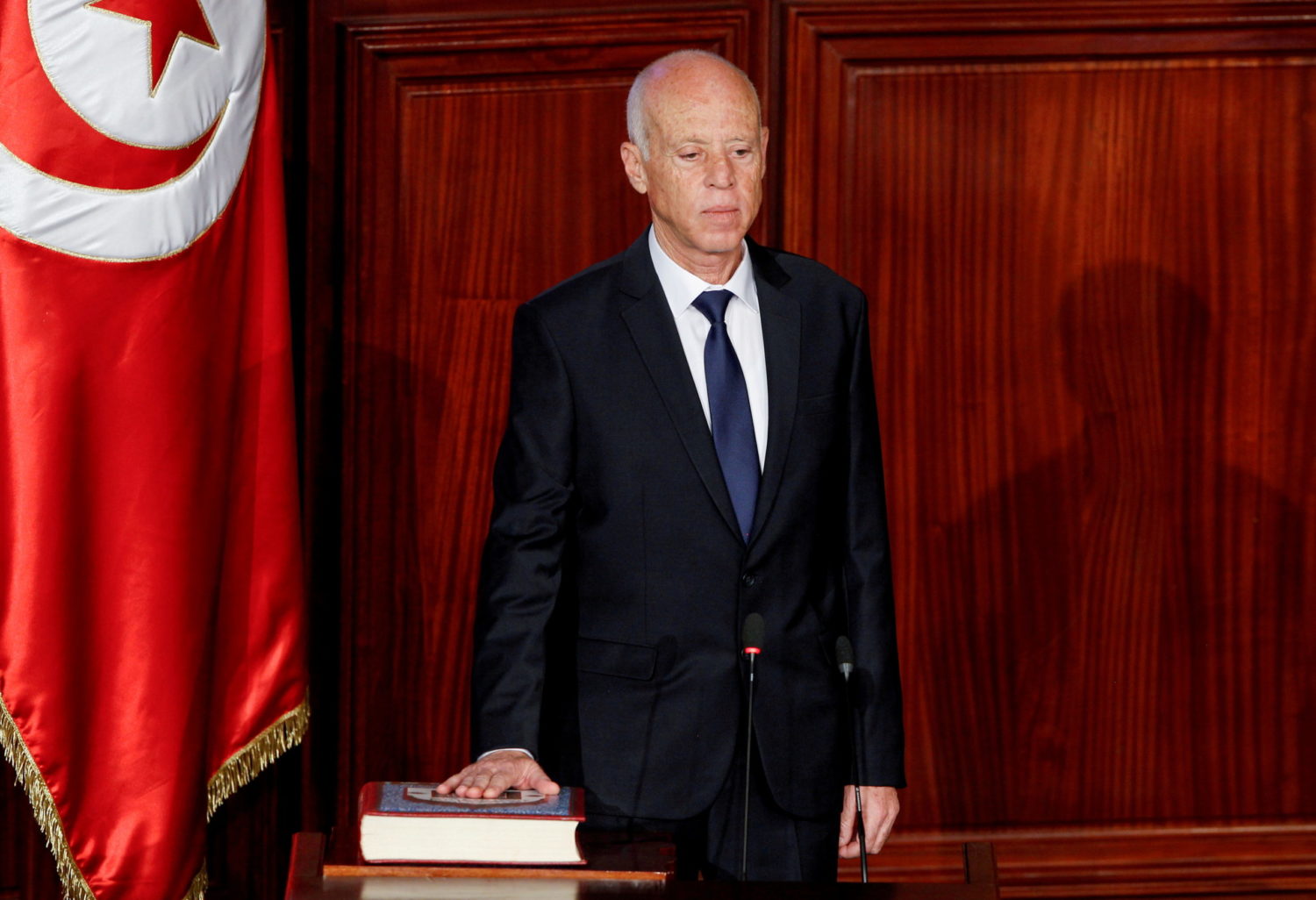 TUNIS (Reuters) – Tunisia’s President Kais Saied said on Thursday there was “no turning back” from his decision to freeze parliament and assume executive power, moves his opponents have branded a coup.

Speaking in a video published by his office, Saied also rejected calls for talks over the crisis, saying “there is no dialogue except with the honest” and that no dialogue was possible with “cancer cells.”

The biggest party in parliament, the moderate Islamist Ennahda, which has been the most vocal opponent of Saied’s moves, had called for dialogue in a statement earlier on Thursday.

Some 11 days after his intervention, Saied has not named a new prime minister, announced any steps to end the emergency or declared his longer-term intentions.

The powerful labor union, as well as both the United States and France, have called on him to quickly appoint a new government. The union is preparing a roadmap to end the crisis that it says it will present to Saied.

“President Saied must recommit to the democratic principles that underpin U.S.-Tunisia relations, and the military must observe its role in a constitutional democracy,” they said in a joint statement.

Ousted Prime Minister Hichem Mechichi appeared in public for the first time on Thursday since he was dismissed. He was shown in pictures published by the anti-corruption watchdog that it said were taken on Thursday at its office. 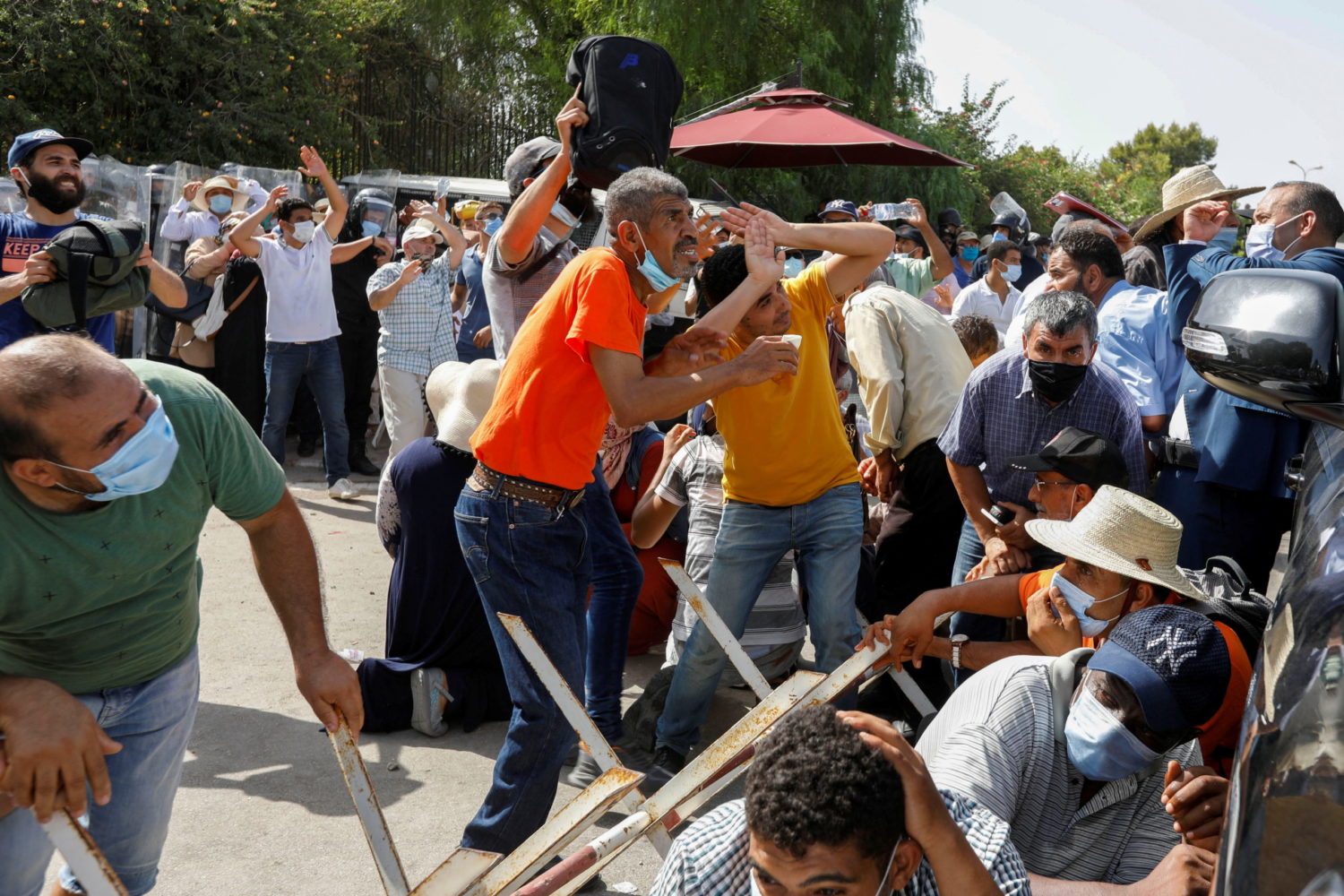 By Tarek Amara and Angus McDowall

TUNIS (Reuters) – Tunisia’s nascent democracy faced its worst crisis in a decade on Monday after President Kais Saied ousted the government and froze parliament with help from the army, a move denounced as a coup by the main parties including Islamists.

It follows months of deadlock and disputes pitting Saied, seen as a political outsider, against Prime Minister Hichem Mechichi and a fragmented parliament as Tunisia has descended into an economic crisis exacerbated by the COVID-19 pandemic.

The move risks a destabilizing confrontation between the army-backed president and groups that say the step is undemocratic, including Islamists who were repressed for decades until the 2011 Tunisian revolt that sparked the “Arab Spring.”

In a declaration late on Sunday, Saied invoked emergency powers under the constitution’s Article 18 to dismiss Mechichi and suspend parliament for 30 days, saying he would govern alongside a new premier. He rejected accusations of a coup.

Large crowds poured into the streets in support, reflecting growing anger at the moderate Islamist Ennahda party – the biggest party in parliament – and the government over chronic economic malaise. The economy shrank by 8% last year after the pandemic hit the tourism sector.

Parliament Speaker Rached Ghannouchi, the head of Ennahda which has been part of successive coalitions, decried it as an assault on democracy and urged Tunisians to take to the streets in opposition.

“I am against gathering all powers in the hands of one person,” Ghannouchi said when he arrived at parliament early on Monday morning where soldiers surrounding the building stopped him from entering. He had said he would call a session in defiance of Saied.

Nearby, supporters and opponents of the president threw stones at each other leading to injuries with one man sitting on the pavement bleeding from the head. Tunisia’s hard-currency bonds tumbled.

The army, which has yet to comment on Saied’s moves, barred workers from the government palace in the Kasbah and blocked off the state television building.

Mechichi — also an independent — is at his home and not under arrest, one source close to him and two Tunisian security sources said.

Saied, who has yet to say when the new premier will be appointed, said he would replace the defense and justice ministers.

His actions followed a day of protests against the government and Ennahda for what is seen as a failure to curb the COVID-19 crisis and revive the economy.

Though it has failed to deliver prosperity or good governance, Tunisia’s democratic experiment since 2011 has stood in stark contrast to the fate of other countries where Arab Spring revolts ended in bloody crackdowns and civil war.

Outside parliament, supporters of Saied and Ennahda hurled insults and bottles at each other.

“We are here to protect Tunisia. We have seen all the tragedies under the rule of the Muslim Brotherhood,” said a young man who gave his name as Ayman.

He was referring to the Islamist movement founded in Egypt in 1928 which inspired Sunni Islamists across the Arab world, including Ennahda.

In recent years, Ennahda has sought to distance itself from the Brotherhood.

“Saied is a new Sisi who wants to collect all authority for himself …We will stand up to the coup against the revolution”, he said.

Saied has warned against any violent opposition would be met with force. He swept to office in 2019 after campaigning as the scourge of a corrupt, incompetent elite.

He framed his actions as a constitutional and popular response to the economic and political paralysis Tunisia has been mired in for years. He said Article 80 gave him the power to dismiss the government and appoint a temporary administration and to freeze parliament and lift the immunity of its members.

However, the article requires consultation with the prime minister and parliament speaker and Ghannouchi has denied having been consulted while Mechichi has not spoken in public.

It also requires approval by a constitutional court that has not yet been set up.

Two of the other main parties in parliament, Heart of Tunisia and Karama, joined Ennahda in accusing Saied of a coup.

There has been a muted international response to Saied’s move but Turkey’s ruling, Islamist-rooted AK Party condemned his actions. Qatar, which has supported Sunni Islamists such as the Muslim Brotherhood, called on all parties to avoid escalation and move towards dialogue.

A spokesperson for the German Foreign Office said the suspension of parliament was based on a “a rather broad interpretation of the constitution”.

“We do not want to call it a coup,” the spokesperson said in response to a journalist’s question. “We will certainly seek talks with the Tunisian ambassador in Berlin.”

The European Union also urged all political actors in Tunisia to respect the country’s constitution and avoid violence.

(Reporting by Tarek Amara and Mohamed Argoubi in Tunis, additional reporting by Robin Emmot in Brussels and Holger Hansen in Berlin; writing by Angus McDowall/Tom Perry, editing by Lincoln Feast and Emelia Sithole-Matarise)