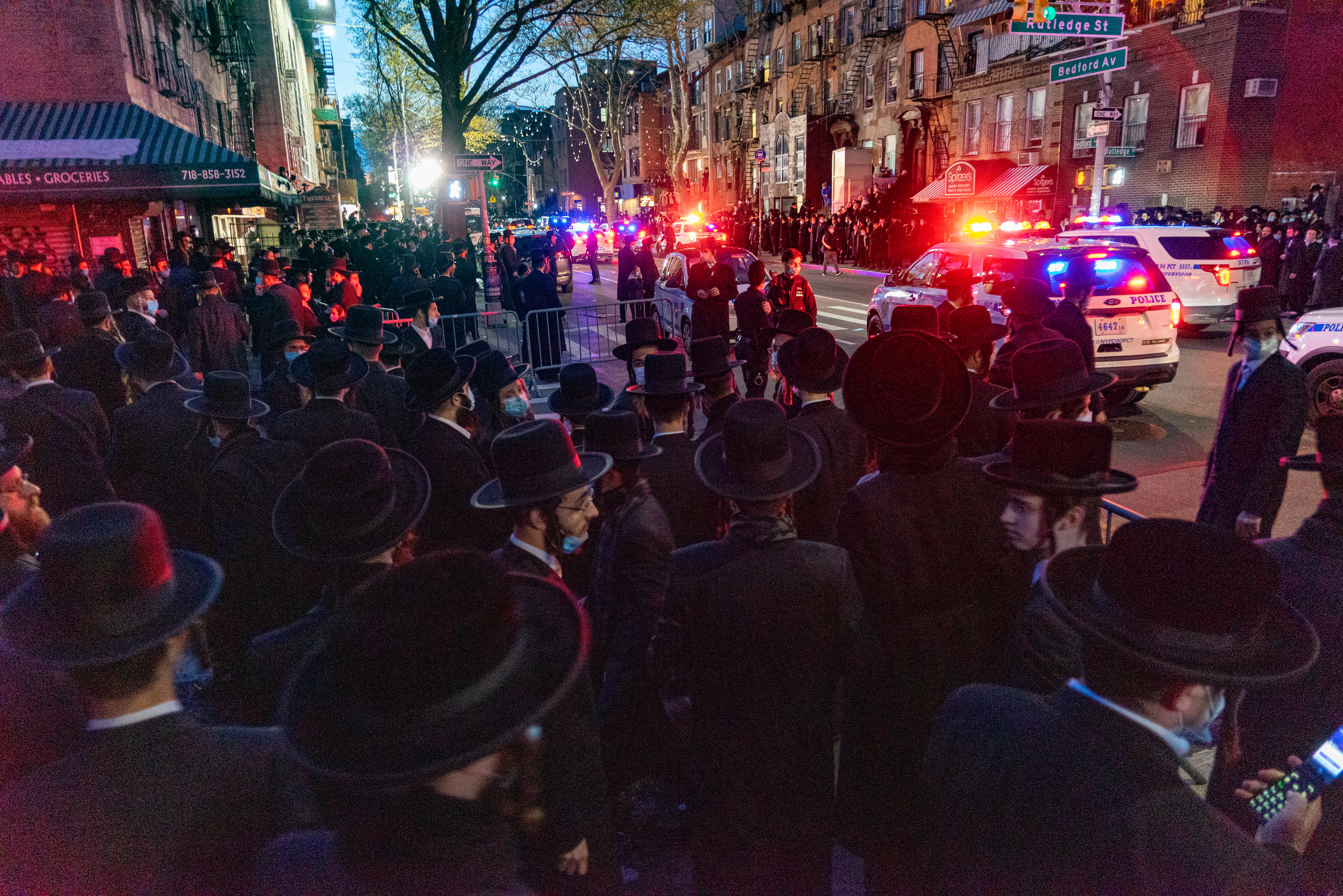 By Nathan Layne and Maria Caspani

NEW YORK (Reuters) – New York police broke up a massive crowd of ultra-Orthodox Jews who took part in a rabbi’s funeral in defiance of a statewide coronavirus shutdown, and the mayor walked back comments on the gathering that some Jewish leaders called discriminatory.

City Police Commissioner Dermot Shea told a news conference on Wednesday that some 12 summonses were issued for a variety of offenses at the Brooklyn gathering on Tuesday night, which he estimated involved “thousands of people crammed onto one block.”

Mayor Bill de Blasio personally oversaw the dispersal of the Hasidic residents in Brooklyn’s Williamsburg section who had gathered late on Tuesday for the funeral of Rabbi Chaim Mertz, who died of COVID-19, the disease caused by the coronavirus.

A Jewish congregation had worked with police on a plan to close streets so the funeral could adhere to social-distancing rules, said Mitchell Silber, executive director at the Community Security Initiative, a program to protect Jewish institutions.

Both the rabbi’s congregation and the police were surprised at the number of people who attended, he said.

“This was a single event, planned by one congregation. The troubling incident last night should not negatively reflect on Hasidim, the Williamsburg community, Orthodox Jewry or the entire Jewish community,” Silber told Reuters.

Some Jewish leaders criticized de Blasio, who wrote on Twitter late on Tuesday that he had instructed the city’s police department to “summons or even arrest those who gather in large groups.”

“This is about stopping this disease and saving lives,” the mayor wrote on Twitter. The disease has killed more than 23,000 people in New York state despite stay-at-home orders and a shutdown of schools and businesses.

The criticism was for de Blasio’s having addressed the tweet to “the Jewish community, and all communities.”

Jonathan Greenblatt, the CEO of the Anti-Defamation League noted that New York City is home to more than one million Jews.

“The few who don’t social distance should be called out – but generalizing against the whole population is outrageous especially when so many are scapegoating Jews,” Greenblatt wrote on Twitter.

“We are very concerned about the mayor’s comment which stigmatizes an entire community for the irresponsible behavior of a small group,” Dratch said in an email to Reuters.

At a news conference with Shea, de Blasio said he regretted the way he expressed concern about the gathering of mourners but that he spoke “out of passion” for the safety of the people of his city, the epicenter of the country’s crisis.

“Again this is a community I love, this is a community I’ve spent a lot of times working with. And if you saw anger and frustration, you’re right,” de Blasio said. “I spoke out of real distress and people’s lives were in danger before my eyes, and I was not going to tolerate that.”

At the news conference, Shea said, “People have to be accountable for their own actions regardless of what neighborhood, ethnicity, where they come from – we cannot have what we had last night.”

David Harris, chief executive of the AJC global Jewish advocacy group, said de Blasio has been a “good friend” of the Jewish community and the Twitter comments that offended many in the community had been out of character. 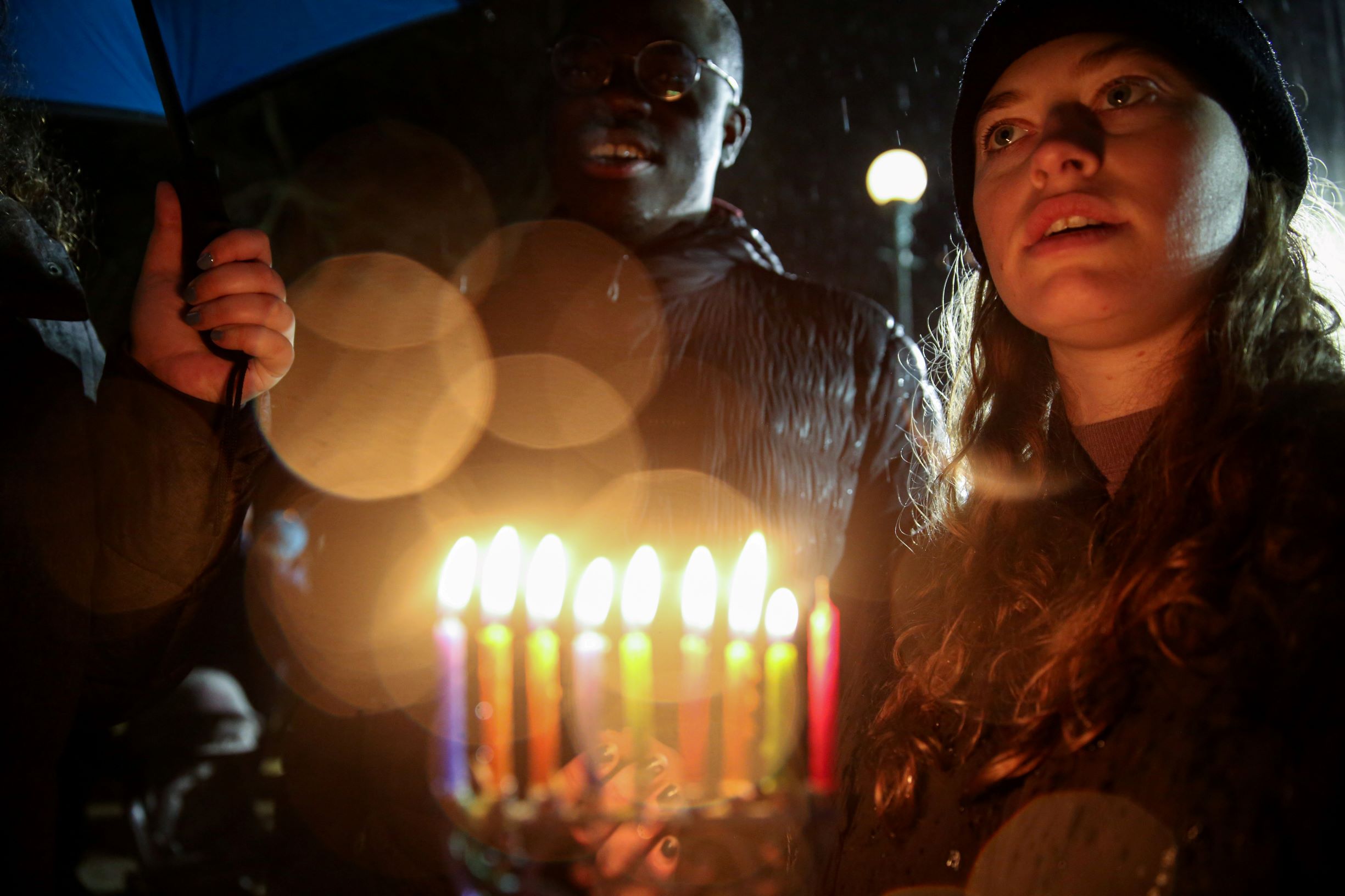 NEW YORK (Reuters) – An assailant who stabbed five people attending a party at an Hasidic rabbi’s home in what New York’s governor called an act of domestic terrorism appears to have been acting alone, police said on Sunday.

Grafton Thomas, 37, is accused of attempted murder after bursting in to the Hanukkah celebration on Saturday night in Rockland County, about 30 miles (48 km) north of New York City. Police said he fled and was later arrested in Manhattan by two officers who were on the lookout for his car.

“We have nothing to indicate at this time that there were other people (involved), but that will be part of a very lengthy, very methodical and thorough investigation,” New York Police Department Commissioner Dermot Shea told reporters.

Speaking at a news conference alongside Mayor Bill de Blasio and other city leaders, Shea said that the suspect said “almost nothing” to the young officers who took him into custody at gunpoint after stopping him in Harlem. Shea declined to say whether Thomas had previously been on the department’s radar.

New York Governor Andrew Cuomo said the attack in the small town of Monsey, which followed days of anti-Semitic incidents in the New York City area, was an act of domestic terrorism.

“These are people who intend to create mass harm, mass violence, generate fear based on race, color, creed,” Cuomo told reporters after meeting with some of the victims.

“We must all come together to fight, confront, and eradicate the evil scourge of anti-Semitism,” Trump wrote on Twitter.

Thomas, from Greenwood Lake, New York, is due to return to court in the town of Ramapo on Jan. 3 after he was arraigned on Sunday on five counts of attempted murder and ordered held on $5 million bail.

According to Yossi Gestetner, co-founder of the Orthodox Jewish Public Affairs Council, the attacker had his face partially covered with a scarf when he stabbed five people, two of whom were in critical condition.

“One of the rabbi’s children was also stabbed,” Gestetner told reporters.

One witness who was at the rabbi’s home said he began praying for his life when he saw the assailant remove a large knife from a case.

“It was about the size of a broomstick,” Aron Kohn told the New York Times.

Roughly a third of the population of Rockland County is Jewish, including a large enclave of Orthodox Jews who live in secluded communities.

Another attack took place in Monsey in November when a man walking to a synagogue was stabbed multiple times, according to media reports.

The attack on the party, which was attended by dozens of people, followed a spate of anti-Semitic attacks in New York City and surrounding areas.

Shea told Sunday’s news conference there had been a 21% increase in anti-Semitic hate crimes in the city this year.

Saturday’s violence in Rockland County was at least the 10th anti-Semitic incident in the New York and New Jersey area in the last week, according to the Anti-Defamation League, a Jewish organization.

They included a 65-year-old man who was reportedly punched and kicked by an assailant yelling an anti-Semitic slur in Manhattan on Monday, and attacks on two other men in Brooklyn on Tuesday.

Those incidents came after six people were killed during a shooting rampage at a kosher grocery store in northern New Jersey earlier this month.

Earlier this year, a gunman killed a female rabbi and wounded three people during Sabbath services at Congregation Chabad in Poway, near San Diego, on the last day of Passover in April 2019.

Six months before that, a gunman killed 11 worshipers at the Tree of Life synagogue in Pittsburgh in the deadliest anti-Semitic attack in U.S. history.

Israeli Prime Minister Benjamin Netanyahu condemned “recent displays of antisemitism including the vicious attack at the home of a rabbi in Monsey,” at the start of a weekly cabinet meeting.

The Jewish holiday of Hanukkah commemorates the 2nd century B.C. victory of Judah Maccabee and his followers in a revolt against armies of the Seleucid Empire.

The Orthodox Jewish Public Affairs Council posted video on social media that showed the rabbi in Monsey and his followers continuing their celebrations at the synagogue next door, after the attack in his home.

It gave a rough translation of the lyrics they sang: “The grace of God did not end and his mercy did not leave us.”

A group of anti-Semitic vandals attacked the car of a Dallas area rabbi.

Rabbi Yaakov Rich leads a group worshiping at his home in Dallas.  The neighborhood’s Homeowners Association (HOA) tried to stop the group from having their times of worship and tried to sue the Rabbi to make him stop.  A court threw out the case last month.

Last week, the city of Dallas sued him to make improvements to the home if he wants to continue to hold services.

Then he came outside Thursday to find s swastika painted on his car.

“As a Jew, the swastika is the most offensive symbol that there is. They didn’t just attack me, they attacked every Jew in the City of Dallas. I am very grateful, however, that the members of Congregation Toras Chaim are banding together to ensure that there is no disruption in our activities,” Rabbi Rich told CBS Dallas.

Justin Butterfield of the Liberty Institute told CBS Dallas that this is not the first time the group has faced vandalism.

“In orthodox Jewish homes, there is a little box on the doorway with a scroll on it with a scripture on it, and in the past, somebody had ripped that off of the doorway.  They’ve also had people drive in front of the home screaming obscenities at them,” said Butterfield.

Rabbi David Saperstein has been nominated by President Obama to be the next ambassador-at-large for international religious freedom at the U.S. State Deaprtment.  Rabbi Saperstein would be the first non-Christian to hold the position since the job was created in 1998.

“I am grateful that Rabbi Saperstein has chosen to dedicate his talent to  service the American people at this important time for our country,” President Obama said.  “I look forward to working with him in the months and year ahead.”

The nomination is coming after controversy.  The position was left unfilled by the Obama Administration for almost two years before Suzan Johnson Cook took the role in 2011.  She left in October during very visible times of Christian persecution around the world and the administration had not taken steps to fill the office for the last nine months.

Russell Moore of the Southern Baptist Convention took note of the nine-month delay in the President’s action but had praise for the nominee.

“Rabbi Saperstein is a respected thinker and leader who brings gravity to this important task,” Moore said.  “He has my prayers and my pledge of full cooperation.  The downgrade of religious freedom and the persecution of religious minorities around the world must end.”