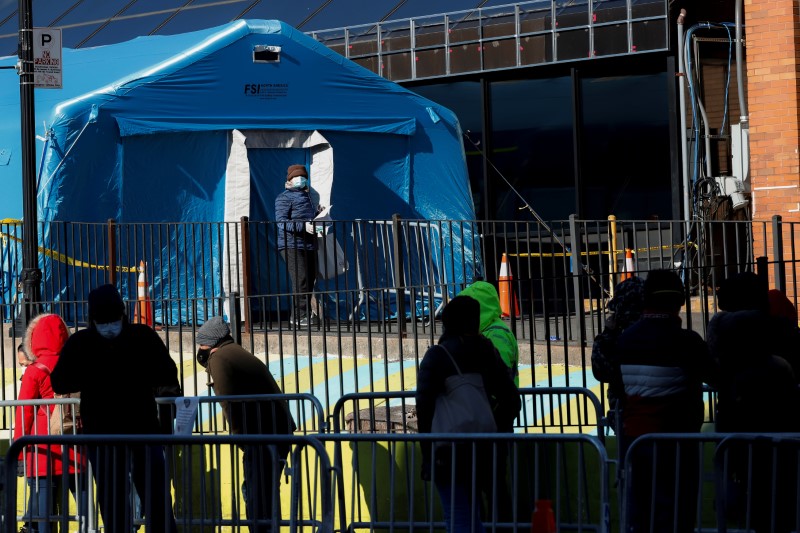 NEW YORK (Reuters) – The official count of coronavirus infections in the United States sits at about 70,000 cases, but a chronic shortage of tests means only a fraction of the people infected are being counted. So how can we know how many Americans actually might have the disease?

A Reuters/Ipsos poll conducted in the past several days could offer what one behavioral health expert called a “fascinating” hint of the possible numbers.

In the nationwide poll, 2.3% of Americans surveyed said they’ve been diagnosed with the coronavirus, a percentage that could translate to several million people.

Of course, it’s impossible to know if the answers are a result of misinformed self-diagnoses, untested professional diagnoses or test-confirmed infections. But Carnegie Mellon University professor Baruch Fischhoff, who studies risk perception and analysis, said that the poll results shouldn’t be viewed as merely a collective neurotic reaction to the pandemic.

Given the shortage of coronavirus test kits, it may well be a broadly accurate estimate of the extent of the infection across the United States, he said. “It may be the best available data,” he said.

The poll, which surveyed 4,428 adults between March 18 and 24, shows a dramatic increase in those saying they have tested positive for the virus from a similar poll conducted just a few days earlier. In the Reuters/Ipsos poll of 1,115 Americans conducted March 16 and 17, about 1% said they were infected.

The latest poll also suggests that Latinos are far more likely to come in contact with people who may be infected than whites; the same appears true for younger people compared to older Americans. The disease appears to be concentrated in the Northeast, according to the poll, but the survey also suggests it’s widespread throughout the country.

David Cates, director of behavioral health at Nebraska Medical Center in Omaha, was intrigued by the results.

“Going back to that concept of the wisdom of crowds, you’re getting a response that may actually be closer to reality than confirmed testing,” he said. “And that is just absolutely fascinating.”

But he said the conflicting information from officials and in the media, as well as the shortage of testing, may also explain some of the response to the poll.

“They are listening to the news and thinking, ‘Yeah, you know, that’s what my father has, and that’s what I have,'” he said. “And this is probably what’s going on with the neighbor.”

Still, the poll results may fill some gaps in knowledge in the face of limited testing.

For example, Fischhoff said, on March 15, Ohio Gov. Mike DeWine estimated there were about 100,000 infections in his state, which represents about 1% of the state’s population, despite there only being a handful of confirmed cases at the time. The governor’s office declined to comment on the estimate.

“You know, with the doubling rate in the country, it’s not implausible that the infected rate was 1% and now it’s 2.3%,” he said.

He commented on another finding in the poll, the difference in proximity between rural and urban areas. In rural communities, according to the poll, about 9% of people said they were either infected; had contact with someone infected; or knew someone infected in their extended social network. In denser urban areas, that rate rose to 13%.

“As you would expect, as you’ve got greater density, you’d expect a higher rate,” he said.

Northwestern University economics professor Charles Manski said he was gratified to see that older Americans may have less exposure to infected people than other age groups. The disease poses a particular risk for the elderly.

Only 6% of Americans 55 and over said they were either infected; had contact with someone infected; or knew someone infected in their extended social network, the poll showed. That compares to 19% for adults under 35.

He said older people tend to have smaller social circles, which might explain part of the results, but he also thinks older Americans are being more careful than their younger counterparts.

Monica Schoch-Spana, a medical anthropologist with the Johns Hopkins Center for Health Security in Baltimore, Maryland, said the results also illustrate the risk to some ethnic communities as the broader economy shrinks and many retreat into their homes.

High-risk, low-paying jobs that have not been shut down – such as hospital custodial workers, farm laborers, delivery drivers and warehouse workers – tend to have a high percentage of minority workers.

She also noted that the poll is a rare example of a subject that doesn’t have a massive partisan divide: About 14% of Democrats said they are infected or know of someone infected, compared to about 10% of Republicans.