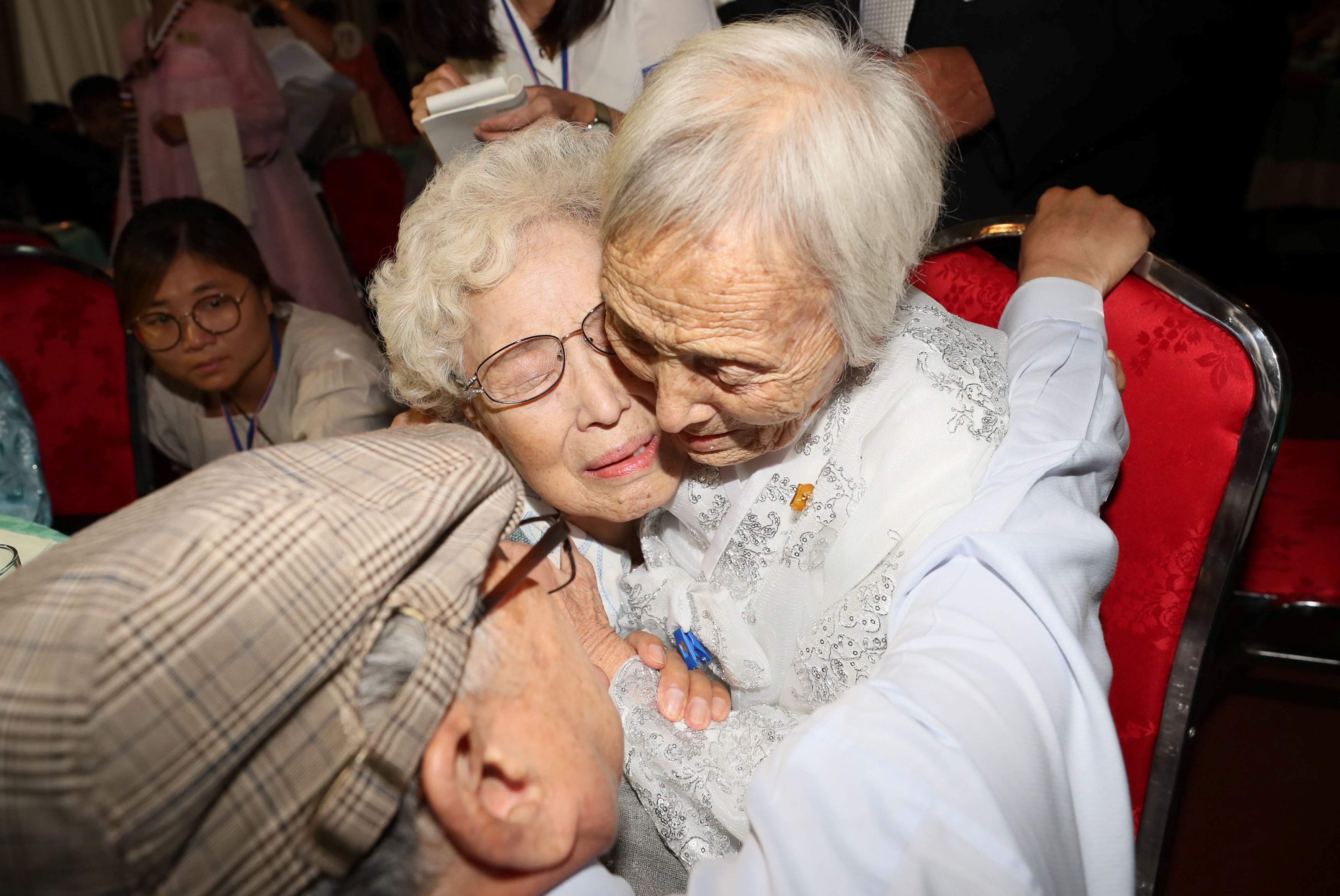 SEOUL (Reuters) – About 90 families from North and South Korea wept and embraced on Monday as the neighbors held their first reunion events in three years for relatives wrenched apart by the Korean War for more than six decades.

The brief reunions are set to total just 11 hours over the next three days in the North’s tourist resort of Mount Kumgang after the neighbors renewed exchanges this year following a standoff over Pyongyang’s nuclear and missile programs.

About 330 South Koreans from 89 families, many in wheelchairs, embraced 185 separated relatives from the North with tears, joy, and disbelief. Some struggled to recognize family not glimpsed in more than 60 years. 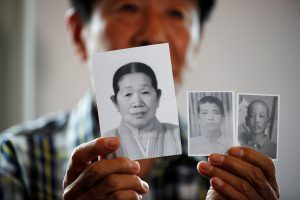 A man selected as a participant for a reunion shows pictures of his deceased mother and little brothers living in North Korea, at a hotel used as a waiting place in Sokcho, South Korea, August 19, 2018. REUTERS/Kim Hong-Ji

“How are you so old?” Kim Dal-in, 92, asked his sister, Yu Dok, after gazing at her briefly in silence.

“I’ve lived this long to meet you,” replied the 85-year-old, wiping away tears as she clasped a photograph of her brother in his youth.

“When I fled home in the war…,” Han said, faltering as she choked with emotion and left her sentence incomplete.

The separated families are victims of a decades-long political gridlock since the 1950-53 war ended in a truce rather than a peace treaty, with ties increasingly strained as Pyongyang rapidly stepped up its weapons programs.

More than 57,000 South Korean survivors have registered for the family reunions, which usually end in painful farewells.

For years, Seoul has called for regular meetings between separated families, including the use of video conferences, but the program often fell victim to fragile ties.

At his historic June summit with U.S. President Donald Trump in June, Kim pledged to abandon his country’s nuclear programs if Washington provided security guarantees, but the two sides have since struggled to agree how to reach that goal.

The reunions should be scaled up sharply, held regularly, and include exchanges of visits and letters, said Moon, himself a member of a separated family from the North’s eastern port city of Hungnam.

“It is a shame for both governments that many of the families have passed away without knowing whether their lost relatives were alive,” he told presidential secretaries at a meeting. 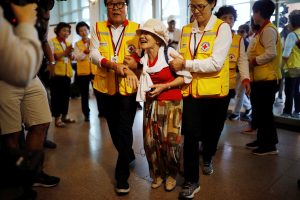 Lee Geum-seom, who has been selected as a participant for a reunion, is helped by volunteers as she arrives at a hotel used as a waiting place in Sokcho, South Korea, August 19, 2018. REUTERS/Kim Hong-Ji

“Expanding and accelerating family reunions is a top priority.”

Ninety-three families from both sides of the border had been initially due to hold a three-day gathering from Monday, but four South Korean members canceled at the last minute because of poor health, the Red Cross said.

From Thursday, 88 more groups of relatives will meet, comprised of 469 individuals from the South and 128 from the North, Seoul’s Unification Ministry says.

For Lee Jong-shik, 81, Monday’s reunion was a hard-won second chance to track down his younger brother, Ri Chong Song, after the failure of a 2009 effort when a different individual showed up, to the dismay of the family from the South.

“I tried so hard, too, searching for you for seven years,” Ri told his brother.

The participants included the families of a prisoner of war and five people abducted by North Korean authorities during the conflict, though the six South Koreans they had hoped to meet had died.

The reunions, which began in 1985, can be a traumatic experience, say survivors, who know they are unlikely to see their relatives again since many are 80 or older and first-timers typically get priority for visits.

The oldest South Korean participant is 101-year-old Baek Seong-gyu, who was reunited with his daughter-in-law and granddaughter.

“Most participants are elderly and many suffer from hypertension, diabetes and have underlying medical conditions,” said physician Han Sang-jo. “Ahead of the reunions, we are thoroughly checking their health.”

Many brought gifts of clothing, medicine, and food for their North Korean relatives since anything deemed extravagant by Pyongyang was unlikely to pass muster.

Moon Hyun-sook, 91, said she put together clothes, cosmetics, and medicine for her two sisters, younger than she is by 12 and 26 years.

“Whenever I saw pretty clothes, I always thought how cute they would look in them,” she said.