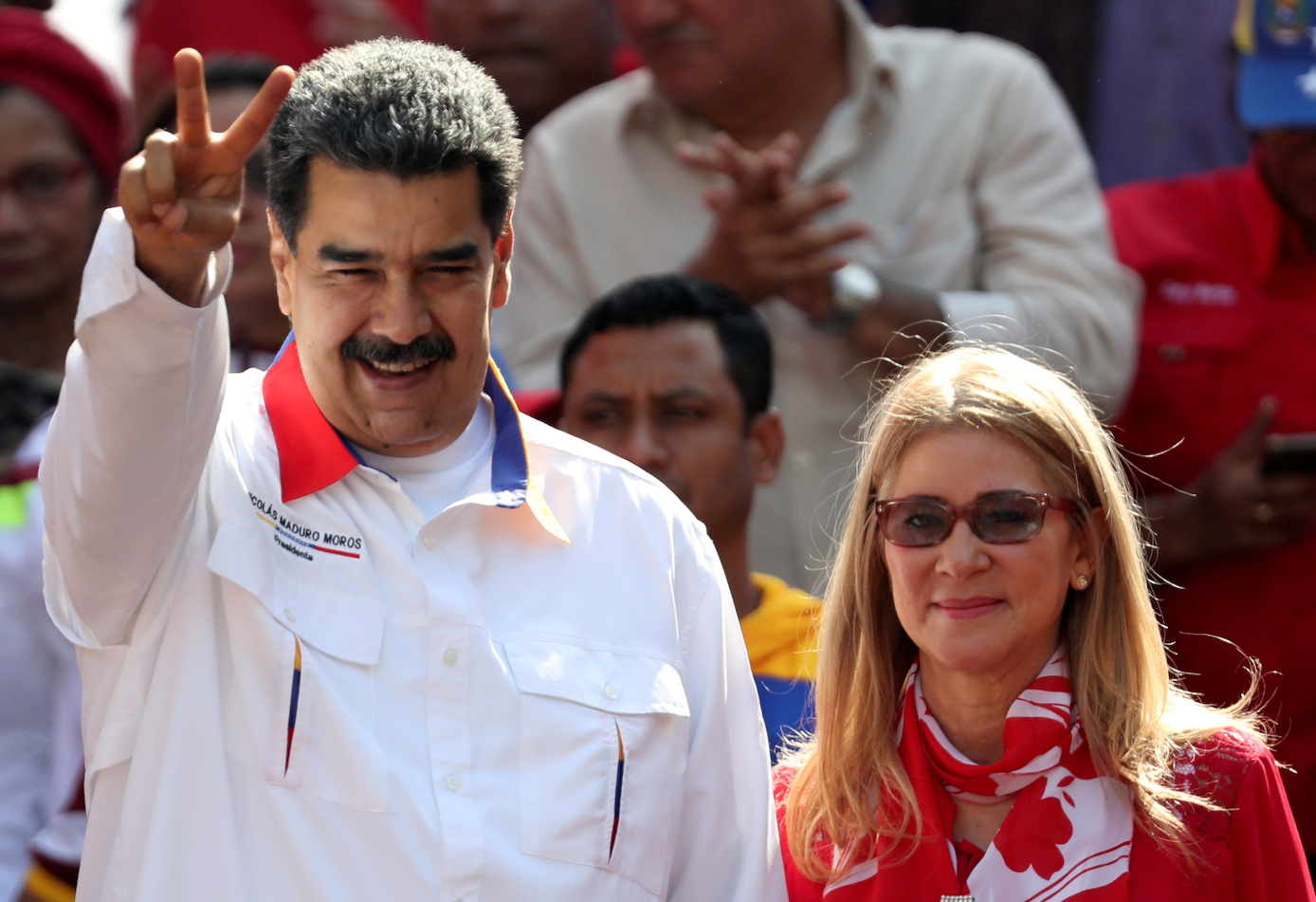 GENEVA (Reuters) – The rule of law has crumbled in Venezuela under the government of President Nicolas Maduro which has usurped the powers of the legislative and judicial branches, an international legal watchdog said on Monday.

The International Commission of Jurists (ICJ) called on Venezuelan authorities to reinstate democratic institutions as part of a solution to the political, economic and humanitarian crisis engulfing the OPEC member.

The government and a compliant Supreme Court effectively stripped the National Assembly of most powers after the opposition won a majority in 2015 elections.

Lawmakers loyal to Maduro generally do not attend the sessions but go to meetings of the Constituent Assembly, a legislative body that meets in the same building.

The Constituent Assembly, created in a 2017 election boycotted by the opposition, is controlled by the ruling Socialist Party and its powers supersede the National Assembly.

“The focus of this report is on the usurpation of the authority of the legislative by the government in Venezuela. This comes after the judiciary was taken over,” he told a news briefing.

“It seems quite clear that in response to the loss of direct support in the legislative assembly, the government decided to completely trample on the principle of the rule of law really and separation of powers,” he said.

The Constituent Assembly was “formed improperly and illegitimately” and has gone far beyond its stated role, Zarifi said, adding: “In fact it seemed to do everything but really discuss a new Constitution”.

Rafael Chavero Gazdik, a professor of constitutional law at Universidad Central de Venezuela, said that the new body had not produced any work on a new draft charter.

“Basically it is a body that is helping the President to do whatever he wants without the rule of law,” he said.

“After two years we have not seen in Venezuela a single draft of any article for a new Constitution – not a single one.”

After their parliamentary immunity was stripped, four lawmakers of the National Assembly are in jail and another 22 have fled Venezuela, Chavero said.

Venezuela’s opposition will meet with representatives of Maduro’s government in Barbados for talks mediated by Norway, the parties involved said on Sunday, as part of efforts to resolve the political crisis.

Opposition leader Juan Guaido, recognized as Venezuela’s rightful leader by more than 50 governments, invoked the constitution in January to assume a rival presidency.

“Addressing the problem of the National Constituent Assembly is a crucial step in any political solution to the crisis that has gripped Venezuela,” ICJ’s Zarifi said, urging the government to engage with the opposition-led legislature. 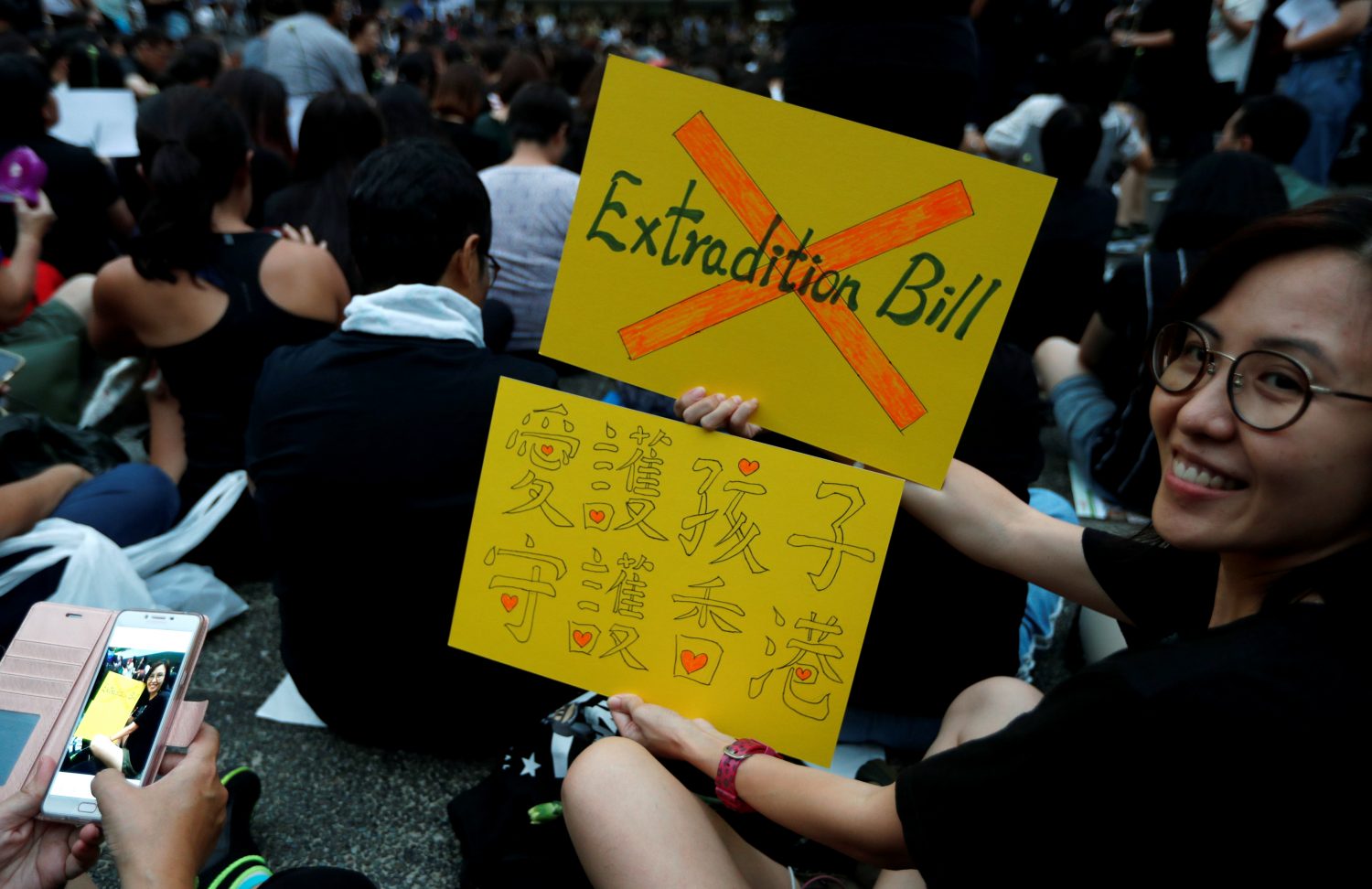 By James Pomfret and Farah Master

HONG KONG (Reuters) – Cracks appeared on Friday in the support base for a proposed Hong Kong law to allow extraditions to China, and opponents of the bill said they would stage more demonstrations after hundreds of thousands took to the streets this week.

The extradition bill, which will cover Hong Kong residents and foreign and Chinese nationals living or traveling in the city, has many concerned it may threaten the rule of law that underpins Hong Kong’s international financial status.

Opposition to the bill on Sunday triggered the former British colony’s biggest political demonstration since its return to Chinese rule in 1997 under a “one country, two systems” deal. The agreement guarantees Hong Kong’s special autonomy, including freedom of assembly, free press and independent judiciary.

Many accuse China of extensive meddling since then, including obstruction of democratic reforms, interference with elections and of being behind the disappearance of five Hong Kong-based booksellers, starting in 2015, who specialized in works critical of Chinese leaders.

The extradition bill has so spooked some in Hong Kong that some of the territory’s tycoons have started moving personal wealth offshore, according to financial advisers, bankers and lawyers familiar with the details.

On Friday, one of the key advisers to Hong Kong leader Carrie Lam, Executive Council member Bernard Chan, told Cable TV he did not think formal discussion of the bill, a precursor to a final vote by the legislature, should continue at present.

“Do we consult, strengthen the bill, or what? Is there still any chance of the bill passing? These are all factors the government must consider,” he said.

“But I definitely say that right now it’s not possible – at a time when there are such intense divisions – to keep discussing this issue. The difficulty is very high.”

Michael Tien, a member of Hong Kong’s legislature and a deputy to China’s national parliament, urged the city government to put the bill on hold.

“It is time for Hong Kong to have a cool-down period,” Lai told Reuters. “Let frayed tempers settle before we resume discussion of this controversial issue. Please, no more blood-letting!”

Beijing-backed Lam has stood by the bill, saying it is necessary to plug loopholes that allow criminals wanted on the mainland to use the city as a haven. She has said Hong Kong courts would safeguard human rights.

Lam has not appeared in public or commented since Wednesday.

China, where courts are controlled by the Communist Party, has rejected accusations of undermining Hong Kong’s freedoms. Beijing has pointed a finger at foreign governments for supporting the demonstrators.

On Friday Chinese Vice Foreign Minister Le Yucheng summoned a senior U.S. diplomat in Beijing to lodge a protest against recent U.S. comments and actions on Hong Kong and the extradition law. He urged Washington to stop interfering in the city’s affairs immediately.

“We urge the U.S. side to treat the Hong Kong government objectively and fairly and respect its normal legislative process,” the statement cited Le as saying.

Foreign Ministry spokesman Geng Shuang said Hong Kong matters were an internal affair for China and nobody had a right to interfere.

“Any vain plots to cause chaos in Hong Kong or to damage Hong Kong’s prosperity and stability will be resolutely opposed by the whole people of China including the vast majority of Hong Kong compatriots,” he said. “This does not enjoy popular support and will not succeed.”

The proposed bill has thrown Hong Kong, a city of about 7 million people, into turmoil, starting on Sunday with a march that drew what organizers said was more than a million people.

Tens of thousands demonstrated in the following days. On Wednesday, protesters surrounded the legislature and swarmed on to a major highway, before being forced back by riot police firing volleys of tear gas and rubber bullets.

On Friday, police kept a close watch as the city returned to normal, with most protesters retreating and businesses re-opening. But further demonstrations are planned.

Organizers have urged people to take to the streets on Sunday and protesters have applied for a permit to gather on Monday, when legislators may reconvene to discuss the bill. The Confederation of Trade Unions and Professional Teachers Union called for a citywide strike.

A few dozen demonstrators clustered throughout the day on Friday near the legislature, which had been scheduled to debate the bill this week.

“Everyone is planning for a big march on Sunday like last week but no one knows what will happen at night or after,” said a woman surnamed Chan, who was helping at a makeshift first aid and supply station.

In the evening, hundreds of people loosely affiliated with a group that calls itself ‘Hong Kong Mothers’ assembled peacefully to show their opposition to the proposed legislation.

Police have made more than a dozen arrests, some in hospitals and university campuses, while scores were wounded in the clashes.

In the United States, senior congressional lawmakers from both parties introduced legislation to require an annual justification from the U.S. government for the continuation of special business and trade privileges to Hong Kong. China called on the United States not to pass such legislation.

The hawkish Chinese newspaper, the Global Times, lambasted foreign leaders for being hypocrites and said their failure to condemn violent demonstrators was “a stark provocation”. 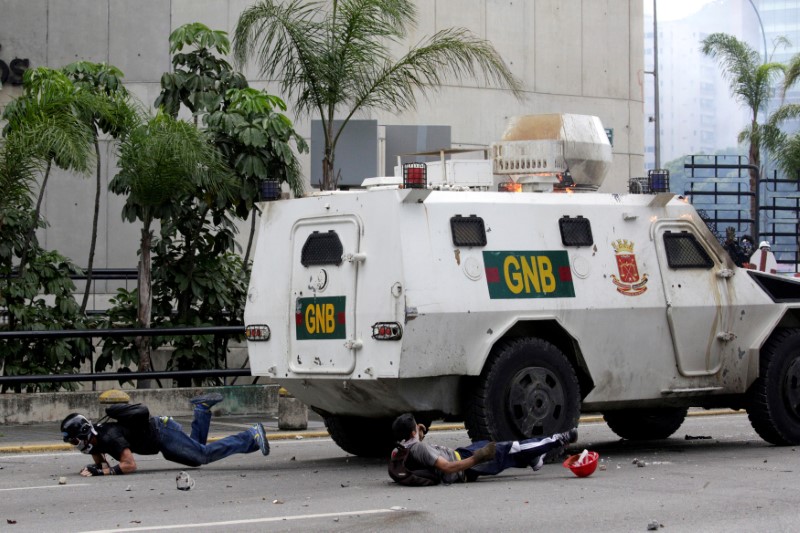 GENEVA (Reuters) – Venezuelan security forces suspected of killing hundreds of demonstrators and alleged criminals enjoy immunity from prosecution, indicating that the rule of law is “virtually absent” in the country, the United Nations said on Friday.

The U.N. human rights office called on the government to bring perpetrators to justice and said it was sending its report to the International Criminal Court (ICC), whose prosecutor opened a preliminary investigation in February.

The U.N. report cited “credible, shocking” accounts of extrajudicial killings of young men during crime-fighting operations in poor neighbourhoods conducted without arrest warrants. Security forces would tamper with the scene so that there appeared to have been an exchange of fire, it said.

There was no immediate response from the government of President Nicolas Maduro to the report.

Critics say Maduro has used increasingly authoritarian tactics as the OPEC nation’s economy has spiralled deeper into recession and hyperinflation, fuelling discontent and prompting hundreds of thousands to emigrate in the past year.

Maduro says the opposition protests were aimed at overthrowing him and accuses the United States of directing an “economic war” against Venezuela.

“The failure to hold security forces accountable for such serious human rights violations suggests that the rule of law is virtually absent in Venezuela,” said Zeid Ra’ad Al Hussein, U.N. High Commissioner for Human Rights. “The impunity must end.”

Zeid called on the U.N. Human Rights Council on Monday to set up an international commission of inquiry into alleged violations in Venezuela — one of its 47 member states.

“The time has come for the Council to use its voice to speak out before this tragic downward spiral becomes irreversible,” Leila Swan of Human Rights Watch said in a statement on Friday.

The unpopular Maduro has cast the release of dozens of opposition members as a peace gesture following his re-election to a new six-year term last month, which was condemned by most Western nations as an undemocratic farce. His government denies the detainees are political prisoners.

Venezuela is suffering from an economic collapse that includes chronic shortages of food and medicine and annualised inflation around 25,000 percent. Maduro blames an “economic war” directed by the opposition and the United States — which has imposed new sanctions on Venezuela’s oil industry.

Under previous attorney-general Luisa Ortega Diaz, who fled Venezuela last year, 357 security officers were believed to be under investigation for crime-related killings, but there has been no public information since then, the report said.