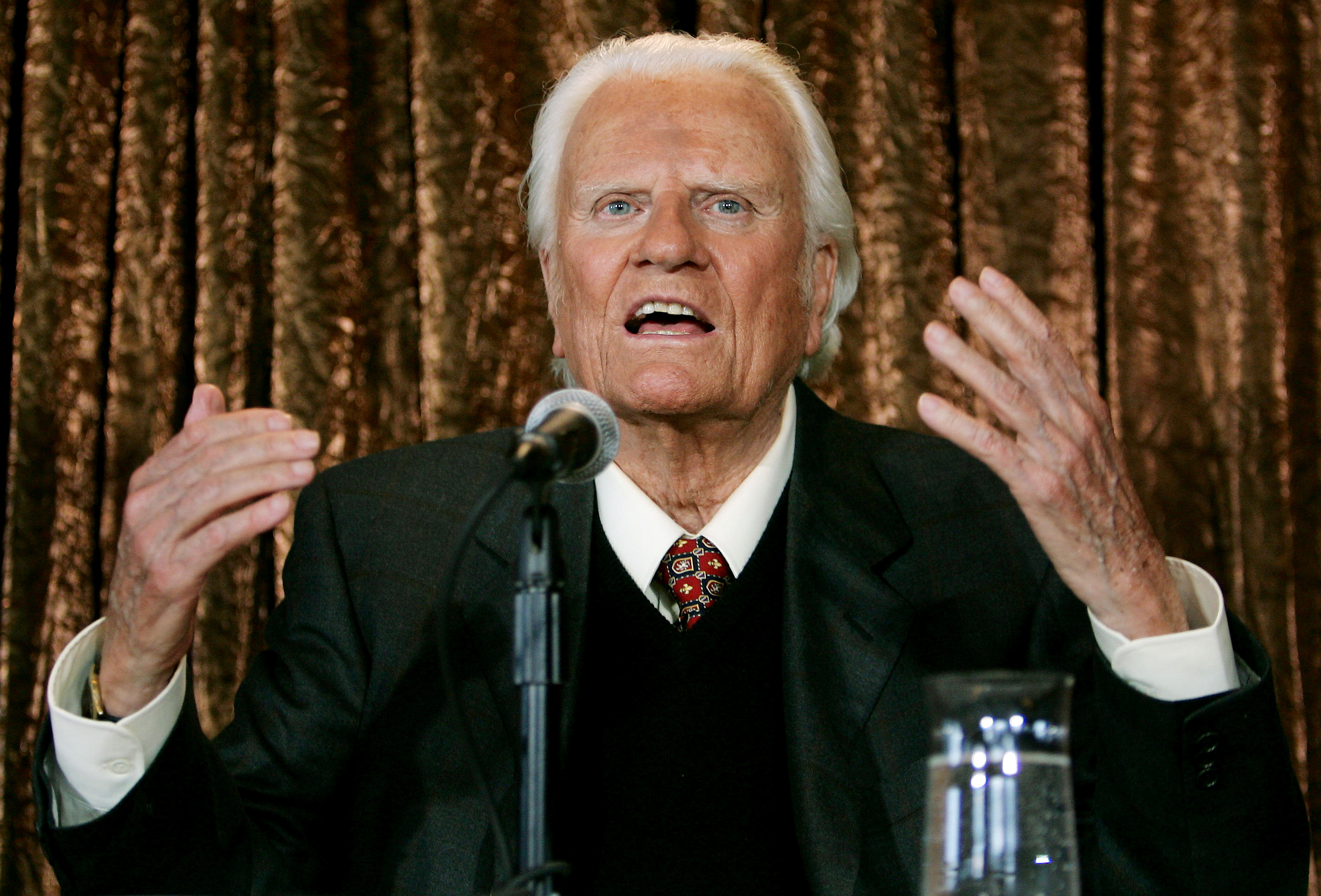 Reverend Billy Graham, considered to be the world’s greatest evangelistic force, is now in the embrace of His Loving Father in Heaven. Throughout his life He was regarded by contemporaries as humorous, non-judgmental, sincere, innocent and accepting. This powerful voice advised twelve Presidents and his wisdom earnestly sought by influential world leaders and royalty throughout the world.  This champion was a lion who’s heart wished only to give God’s biblical word to all who sought salvation, and he roared God’s message for over seven decades leading millions to Christ.

Born on November 7, 1918, in Charlotte, North Carolina, Billy Graham was preaching at an L.A. revival and was a guest on Stuart Hamblen’s radio show in 1949. The publicity made Graham a superstar and he began broadcasting his sermons globally by eventually incorporated the Billy Graham Evangelistic Association (BGEA). Graham began broadcasting his sermons over the radio during a Christian show called Songs in the Night. Once a week he also hosted a program called The Hour of Decision, a program ABC initially transmitted to 150 stations before reaching its peak of 1,200 stations across America.

The Era of  television brought his ministry to new heights although it was Billy Graham’s live crusades that would bring hundreds of thousands of people to his meetings. To listen to Billy Graham “live” brought the Holy Spirit directly to your heart and it spoke to Millions. Billy Graham has preached the Gospel to more people in live audiences than anyone else in history—nearly 215 million people in more than 185 countries and territories—through various meetings, including Mission World and Global Mission. Over 3 million accepted Christ!  Hundreds of millions more have been reached through television, video, film, and webcasts.

In 1943, Billy married Ruth McCue Bell. Ruth was the daughter of a missionary, and lived with her family in China until she turned 17. After graduating with a bachelor’s in anthropology, Graham and Bell were married on August 13, 1943. They would eventually raise five children together, Franklin Graham, Anne Graham Lotz, Gigi Graham, Ned Graham and Ruth Graham.

During his Ministry, Graham was awarded the Ronald Reagan Presidential Foundation Freedom Award, the Congressional Gold Medal, the Templeton Foundation Prize for Progress in Religion, the Big Brother Award, the Templeton Prize for Progress in Religion, and the Speaker of the Year Award. Additionally Graham was recognized by the National Conference of Christians and Jews for promoting understanding between faiths, and bestowed with the Honorary Knight Commander of the Order of the British Empir

“There’ve been times I’ve wept as I’ve gone city to city and I’ve seen how far people have wandered from God,” he told viewers of the television tribute to his ministry called “The Cross”.

One of the most talked about Crusades of Billy’s life occurred in 1958. Billy Graham led an evangelistic campaign in his home town of Charlotte, North Carolina that lasted from September 21 to October 25. The meetings, which were held at the joint invitation of most of the churches in the city and the surrounding area, were held in city’s Coliseum, with overflow crowds watching the meetings on closed circuit television in the Ovens Auditorium next door. Total attendance for the five weeks was 423,387 people, of whom 17,653 came forward for salvation. Below is an excerpt from one of his sermons during that time which is as relevant today as it was then.

Gazing down at the thousands of people gathered for Revival, Reverend Billy Graham spoke out with kind authority…

But how could God? He fills all of space. He is the mighty God of creation that flung those billions of stars out into space. So God did something that astounded the universe. God became a man. That’s who Jesus Christ was. He was God. And when I see Jesus making the blind to see, I see God. When I see Jesus feeding the five thousand, I see God interested in the hunger and the desires of men. When I see Jesus dying on the cross,

I see God in Christ reconciling the world unto Himself. I see the nails in His hands. I see the spike in His feet. I see the crown of thorns on His brow. I hear Him say, “My God, my God, why hast thou forsaken me?” [see Matthew 27:46]. In that terrible moment, Jesus was separated from God in a mysterious way that none of us understood. And now God said, “This is my Son, in whom I am well pleased. Believe in Him. Receive Him. And I will save you.” [See Matthew 17:5.]

But Jesus didn’t stay on the cross. They put Him in the tomb, and on the third day He rose again. And I do not offer you this afternoon a dead Christ. I offer you a risen Christ, a Christ that is at the right hand of God the Father, and who is someday going to come to judge the quick and the dead [see Acts 10:41,42]. I offer you a triumphant Christ who is going to win.

A lot of people say, “Do you think communism is going to win the world?” They might win it temporarily, but it will only be temporarily. Because the Bible says that Jesus Christ is going to establish His kingdom, and the church shall someday triumph. Someday those of us who know Christ shall reign.

Reverend Graham passed away at his home in Montreat, North Carolina, on February 21, 2018, at the age of 99. Although his health had been in decline in recent years, he reportedly died of natural causes.

At the end of the broadcast for “The Cross”, Graham invited viewers to become followers of Jesus as he know doubt would do the very same today, on his day of entering heaven….

“Today, I’m asking you to put your trust in Christ,”

He would pray this prayer for all of us, would you please take a moment to pray together with us now?

Dear God, I’m a sinner. I’m sorry for my sins. I want to turn from my sins. I believe Jesus Christ is your Son. I believe He died for my sin and that You raised Him to life. I want to trust Him as my Savior and follow Him as Lord from this day forward. Jesus, I put my trust in You and I surrender my life to You. Please come into my life and fill me with Your Holy Spirit. I pray this in the name of Jesus. Amen.

Today, Heaven did indeed receive one of Christ’s greatest warriors!