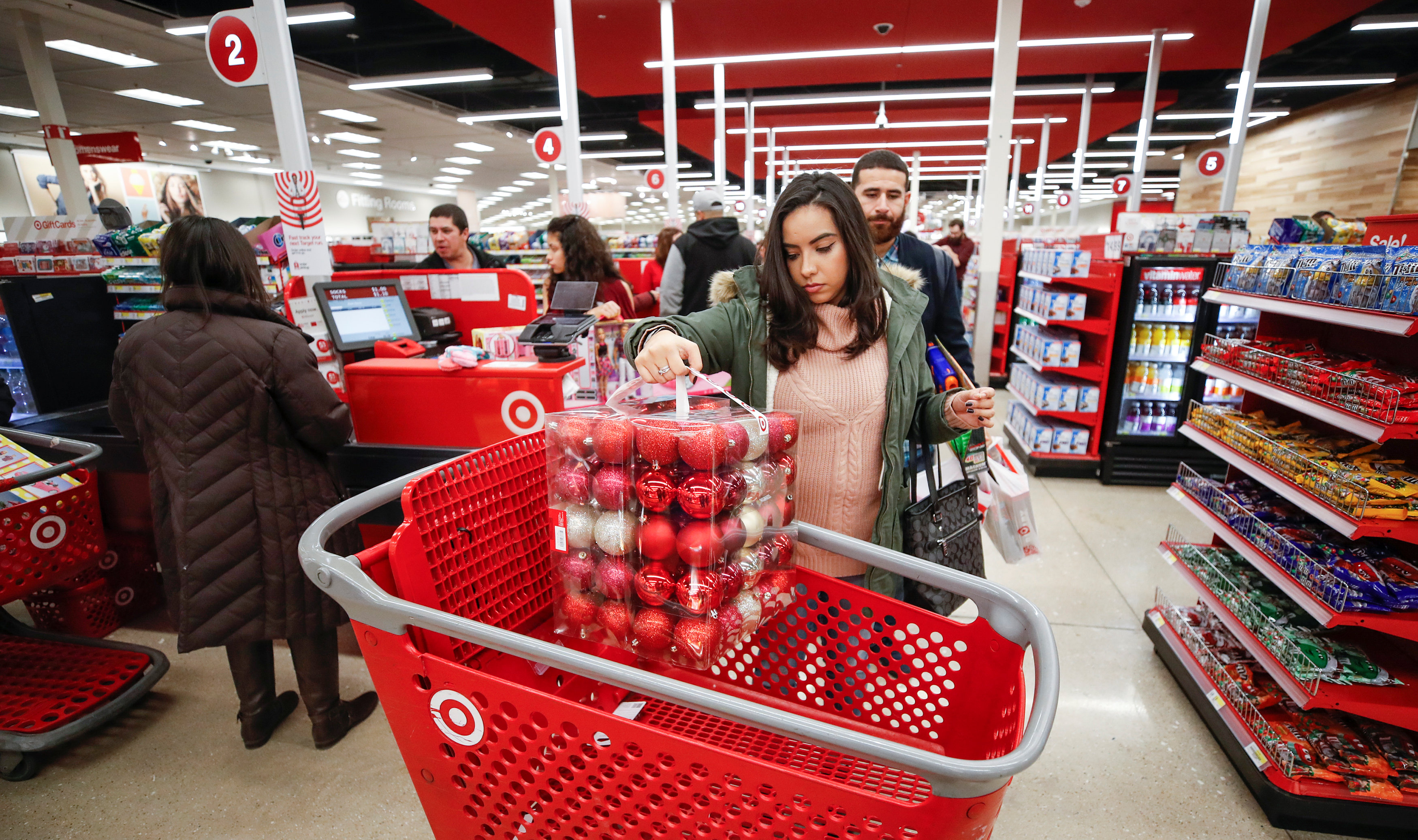 By Richa Naidu and Nandita Bose

(Reuters) – U.S. shoppers had splurged more than $1.52 billion online by Thanksgiving evening, and more bargain hunters turned up at stores this year after two weak holiday seasons as retailers opened their doors early on the eve of Black Friday.

At the start of the holiday season consumer spending rose 16.8 percent year-over-year until 5 p.m. ET on Thursday, according to Adobe Analytics, which tracked 80 percent of online transactions at the top 100 U.S. retailers.

Surging online sales and a shift away from store shopping have thinned the crowds typically seen at stores on Thanksgiving evening and the day after, Black Friday, for the past two years. But a strong labor market, rising home prices and stock markets at record highs have improved shopper appetite this year.

Crowds at stores in many locations around the country were reported to be strong, according to analysts and retail consultants monitoring shopper traffic across the U.S.

“The turnout is clearly better than the last couple of years,” said Craig Johnson, president of Customer Growth Partners. “The parking lots are full and the outlet malls are busy.”

The retail consultancy has 20 members studying customer traffic in different parts of the country.

“The weather is cooperating and people here are out,” he said.

The National Retail Federation is projecting that sales for November and December will rise 3.6 percent to 4 percent this year, versus a 4 percent increase last year. Non-store sales, which include online sales and those from kiosks, are expected to rise 11 percent-15 percent to about $140 billion.

In New Jersey, around 50 people lined up a Macy’s at the Westfield Garden State Plaza mall before it opened and around 200 people stood outside the Best Buy store, many to pick up their online orders.

“Me and my husband have a bigger place and we need a bigger TV for the living room,” said Jenipher Gomes, who bought a 50-inch Samsung TV at Best Buy for $399.99. Shopper Hammad Farooq said he waited at the store for an hour to shop for laptops and monitors.

In Chicago, shoppers appeared to be slightly less enthusiastic to emerge from their turkey slumber and crowds were thin along the city’s popular shopping destination, State Street.

“There’s a few more people than normal but I wouldn’t call this crowded at all,” Deloitte auditor Eugenia Liew said as she shopped at discount retailer Target. “I expected a lot more people.”

The holiday season spanning November and December is crucial for retailers because it can account for as much as 40 percent of annual sales. Retailers try to attract shoppers with deep discounts.

Average discounts ranged between 10 and 16 percent with the best deals online on Thanksgiving evening available for computers, sporting goods, apparel and video games, according to date from Adobe.

The number of customers shopping on their smartphones surged, accounting for 46 percent of the traffic on retail websites, while traffic from desktop and laptop computers declined 11 percent and nearly 6 percent respectively, according to the data. 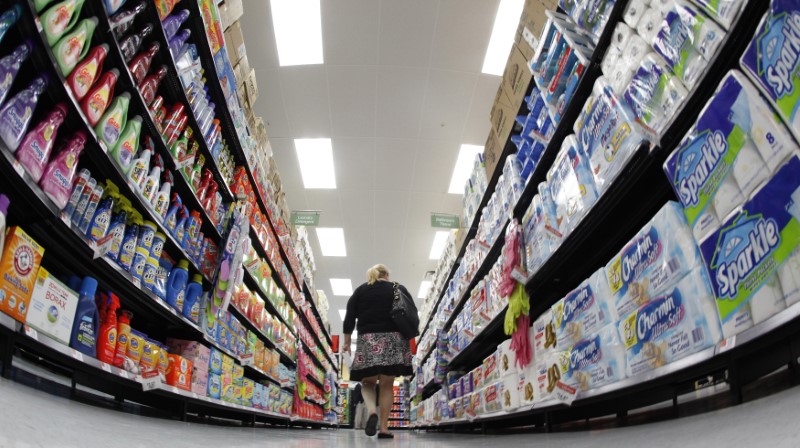 WASHINGTON (Reuters) – U.S. consumer prices barely rose in October as the boost to gasoline prices from hurricane-related disruptions to Gulf Coast oil refineries was unwound, but rising rents and healthcare costs pointed to a gradual buildup of underlying inflation.

Gasoline prices fell 2.4 percent after surging 13.1 percent in September, which was the largest gain since June 2009. September’s jump in gasoline prices followed Hurricane Harvey, which struck Texas in late August and disrupted production at oil refineries in the Gulf Coast region.

Food prices were unchanged after nudging up 0.1 percent in September. Excluding the volatile food and energy components, consumer prices rose 0.2 percent in October amid a pickup in the cost of rental accommodation, healthcare costs, tobacco and a range of other goods and services.

The so-called core CPI gained 0.1 percent in September. October’s increase lifted the year-on-year increase in the core CPI to 1.8 percent. The year-on-year core CPI had increased by 1.7 percent for five straight months.

The slight pickup in the monthly core CPI could offer some comfort to Fed officials amid concerns that stubbornly low inflation might reflect not only temporary factors but developments that could prove more persistent.

Prices of U.S. Treasuries fell and the U.S. dollar <.DXY> pared losses against a basket of currencies after the data. U.S. stock index futures extended losses.

In a separate report on Wednesday, the Commerce Department said retail sales increased 0.2 percent last month. Data for September was revised to show sales jumping 1.9 percent, which was the largest gain since March 2015, rather than the previously reported 1.6 percent advance.

Economists polled by Reuters had forecast that retail sales would be unchanged in October. The slowdown in retail sales last month from September’s robust pace largely reflected an unwinding of the boost to building materials and gasoline prices after recent hurricanes.

Consumer spending, which accounts for more than two-thirds of U.S. economic activity, increased at a 2.4 percent annualized rate in the third quarter. 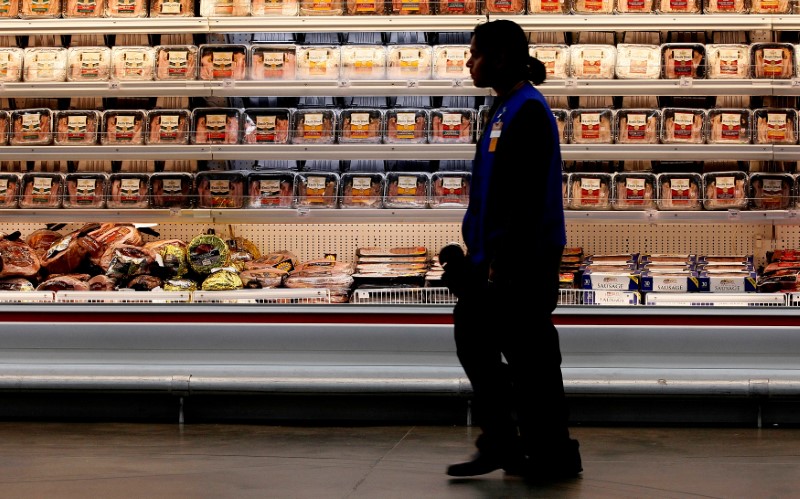 WASHINGTON (Reuters) – U.S. retail sales increased broadly in April while consumer prices rebounded, pointing to a pickup in economic growth and a gradual rise in inflation that could keep the Federal Reserve on track to raise interest rates next month.

The reports on Friday added to labor market data in suggesting the near stall in economic activity in the first quarter was an anomaly. But a moderation in year-on-year inflation led financial markets to dial down expectations of at least two more rate increases this year.

“The economy picked it up a notch from the slow start earlier this year, but the inflation fires are not burning brightly and this will likely keep the Fed on just a gradual pace for interest rate hikes later this year,” said Chris Rupkey, chief economist at MUFG Union Bank in New York.

The economy grew at a 0.7 percent annualized rate in the first quarter, held back by the weakest increase in consumer spending in more than seven years. The Atlanta Fed estimates GDP will rise at a 3.6 percent pace in the second quarter.

In a separate report on Friday, the Labor Department said its Consumer Price Index rose 0.2 percent after dropping 0.3 percent in March. The rise in prices suggested that March’s decline, which was the first in 13 months, was an aberration.

In the 12 months through April, the CPI increased 2.2 percent. While that was a slowdown from March’s 2.4 percent increase, it still exceeded the 1.7 percent average annual increase over the past 10 years.

Financial markets are pricing in more than a 70 percent chance of a rate hike at the Fed’s June 13-14 policy meeting, according to CME Group’s FedWatch program. But the likelihood the U.S. central bank will raise rates twice before the end of the year fell after Friday’s data.

The Fed lifted its benchmark overnight interest rate by 25 basis points in March and has forecast two more hikes this year.

Prices of U.S. Treasuries rose and the U.S. dollar <.DXY> weakened against a basket of currencies after the release of Friday’s data. U.S. stocks were trading mostly lower, pulled down by weak financial and industrial sectors.

Rental costs increased 0.3 percent after a similar gain in March. The core CPI increased 1.9 percent on a year-on-year basis, the smallest gain since October 2015, after rising 2.0 percent in March. Still, April’s increase was above the 1.8 percent average annual increase over the past decade.

“To some extent, this new weakness in price inflation is due to competitive pressures rather than weak demand, so the Fed can afford to discount it,” said Paul Ashworth, chief U.S. economist at Capital Economics in Toronto.

Consumer spending is being supported by a tightening labor market, marked by an unemployment rate at a 10-year low of 4.4 percent. A third report on Friday showed consumer sentiment rose in early May as the outlook for wages improved.

There were hefty gains in sales at building material and electronics and appliance stores.

But sales at clothing stores fell 0.5 percent. Department store retailers have been hurt by declining traffic in shopping malls and increased competition from online retailers, led by Amazon.com <AMZN.O>. 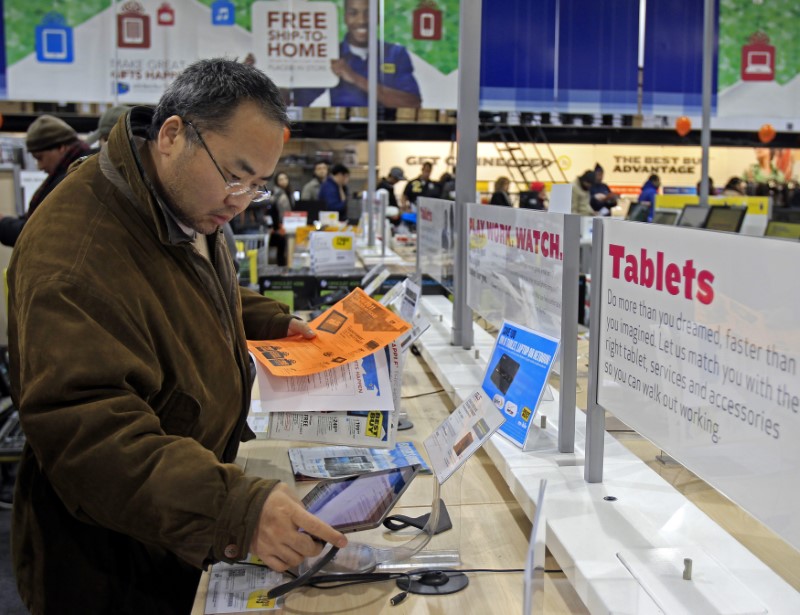 WASHINGTON, Feb 15 (Reuters) – U.S. retail sales rose more than expected in January as households bought electronics and a range of other goods, pointing to sustained domestic demand that should bolster economic growth in the first quarter.

The Commerce Department said on Wednesday retail sales increased 0.4 percent last month. December’s retail sales were revised up to show a 1.0 percent rise instead of the previously reported 0.6 percent advance.

Compared to January last year retail sales were up 5.6 percent.

The economy grew at a 1.9 percent annualized rate in the fourth quarter.

Consumer spending is being supported by a tightening labor market, which is gradually boosting wage growth.

That in turn is underpinning economic growth, paving the way for at least two interest rate increases from the Federal Reserve this year.

Fed Chair Janet Yellen told lawmakers on Tuesday that “waiting too long to remove accommodation would be unwise.”

The Fed hiked its overnight interest rate last December by 25 basis points to a range of 0.50 percent to 0.75 percent.

Last month, sales at electronics and appliances stores jumped 1.6 percent, the biggest rise since June 2015, after falling 1.1 percent in December.

Sales at clothing stores jumped 1.0 percent, the largest rise in nearly a year.

Department store sales have been undercut by online retailers, led by Amazon.com <AMZN.O>.

That has led to some retailers, including Macy’s <M.N>, Sears <SHLD.O> and Abercrombie & Fitch <ANF.N> announcing shop closures.

Sales at online retailers were unchanged last month after soaring 1.9 percent in December.

Receipts at restaurants and bars rose 1.4 percent, while sales at sporting goods and hobby stores shot up 1.8 percent.

Receipts at auto dealerships, however, fell 1.4 percent after vaulting 3.2 percent in December.

Last month’s drop was the biggest since March 2016.