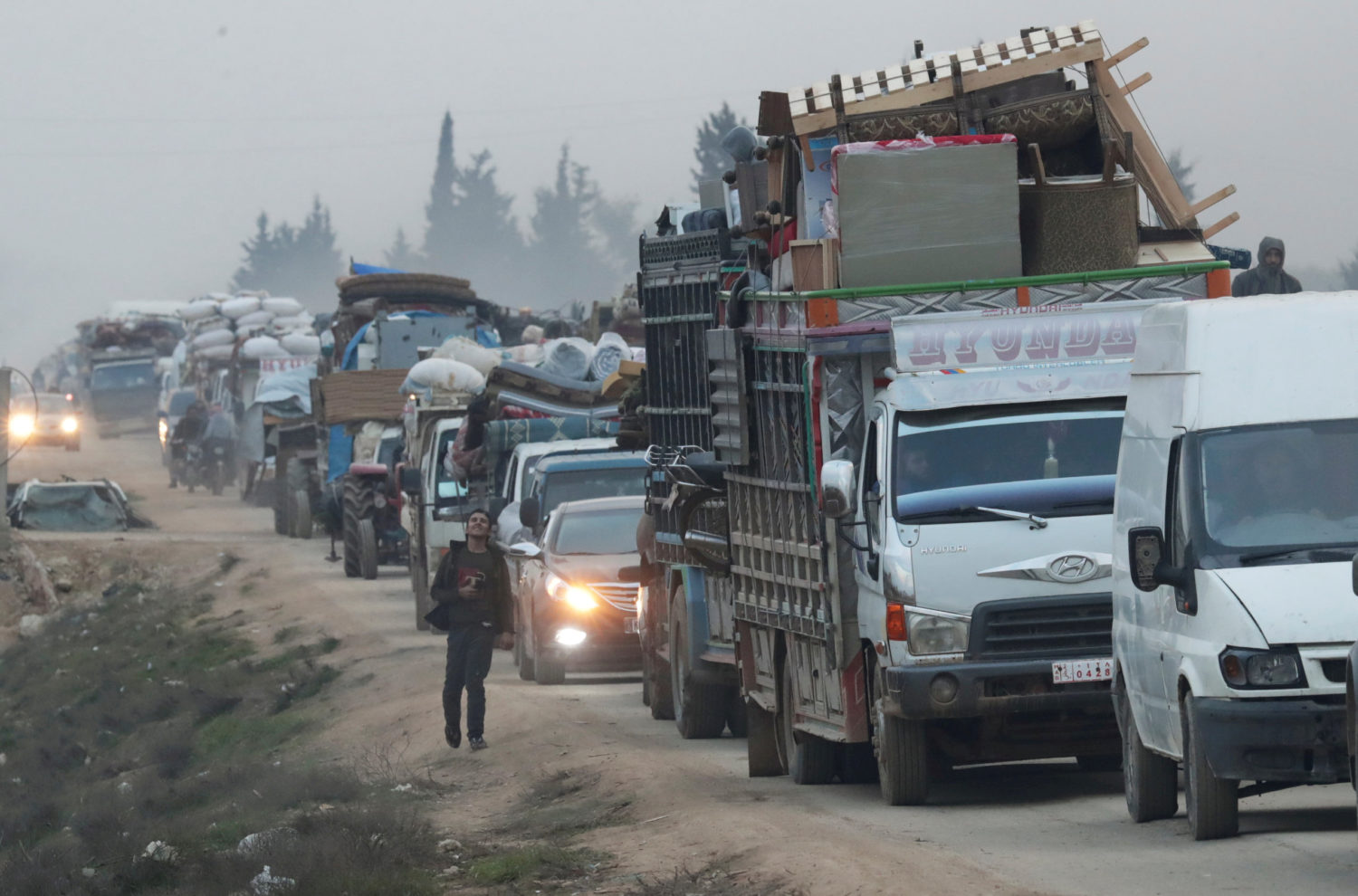 By Suleiman Al-Khalidi and Daren Butler

AMMAN/ISTANBUL (Reuters) – Syrian rebels backed by Turkish forces said on Thursday they had recaptured the crossroads town of Saraqeb, marking a first big push-back of a Syrian government offensive.

The Syrian army has pushed hard in recent months to retake the last large rebel-held region in northwestern Syria after nine years of war that has displaced millions and killed hundreds of thousands.

Turkey has sent thousands of troops and heavy military hardware into Syria’s Idlib province in an incursion to back the rebels against the offensive by Syrian President Bashar al-Assad’s forces.

Nearly a million Syrians have fled over the last three months, the biggest exodus of the war.

The United Nations said on Thursday the battle was having “catastrophic” humanitarian consequences, with the civilian death toll rising and schools and hospitals destroyed.

At least 134 civilians, including 44 children, had been killed in February alone, Najat Rochdi, the United Nations’ senior humanitarian adviser on northwest Syria, said in Geneva.

Seven children were among 11 people killed when an air strike hit a school in northern Idlib on Tuesday, she said.

Rochdi also reiterated a call by the United Nations Secretary-General for a ceasefire.

In Ankara, Erdogan said he would press on with the campaign as he announced that the death toll of the Turkish military forces in the region this month had risen to 21.

“Developments in Idlib have turned to our advantage. We have three martyrs, let them rest in peace. But on the other hand, the regime’s losses are very big,” he said in a speech.

“Our battle will continue. Our talks with the Russians continue,” he said. “If there was no support from Russia or Iran, it would be impossible for Assad to stand.”

Earlier, the Turkish-backed rebels said they made advances in Idlib.

“The city of Saraqeb has been liberated completely from Assad’s gangs,” said Naji Mustafa, spokesman for a coalition of rebel factions, the National Liberation Front.

A Turkish official subsequently said Assad’s forces, backed by Russian warplanes, had launched an assault to take back Saraqeb. “There are violent clashes,” he told Reuters.

Government forces have seized about 60 towns and villages in southern Idlib and the adjoining province of Hama in the last three days, the Syrian Observatory for Human Rights said.

Rebels said heavy fighting was still raging in an area that the army, backed by Iranian-militias, had gained in new advances which the war monitor said had secured for the pro-government forces control of all of southern Idlib.

The push on Saraqeb comes before an end-of-February deadline set by Erdogan for Assad’s forces to pull back from territory that Ankara says is part of a buffer zone agreed with Russia.

Erdogan has said Turkey would otherwise drive them back and the spokesman of his AK Party, Omer Celik, said on Thursday preparations were complete.

“When the time given to the regime to withdraw expires, the Turkish Armed Forces will carry out their duties based on the orders they receive and nobody should doubt our determination about this,” Celik said.

Celik said work on a date for a meeting between Erdogan and Russian President Vladimir Putin to discuss Idlib was till ongoing. Turkish and Russian officials were holding a second day of talks in Ankara on Thursday. Two previous rounds in Ankara and Moscow have not yielded tangible progress.

As well as sending troops, tanks and artillery into the region across its border, Ankara has set up new outposts in what rebels say is preparation for a Turkish operation.

A senior opposition figure in touch with Turkey’s military said the Turkish-backed campaign would continue until the Syrian army was expelled from the buffer zone, and only then would serious negotiations begin over a settlement.

Turkey, which has already taken in 3.6 million Syrian refugees, says it cannot handle another influx and has closed the border. Some migrants have made homes along the border wall, using it to prop up tents and shelters.

Saraqeb is at the crossroads of two highways linking the capital of Damascus, Syria’s second largest city Aleppo and another highway west to the Mediterranean.

Taking back the M5 highway, which goes south to Damascus, had marked a big gain for Assad’s forces as they restored state control over the route between Syria’s two biggest cities for the first time in years of conflict.

U.N. adviser Rochdi said air strikes and shelling were affecting dozens of communities and villages in Idlib and Hama, and 11 medical facilities and 15 schools had been hit this month.

“There are reports of multiple children freezing to death. The needs of civilians in the northwest are exceeding the humanitarian response capacity,” she said.