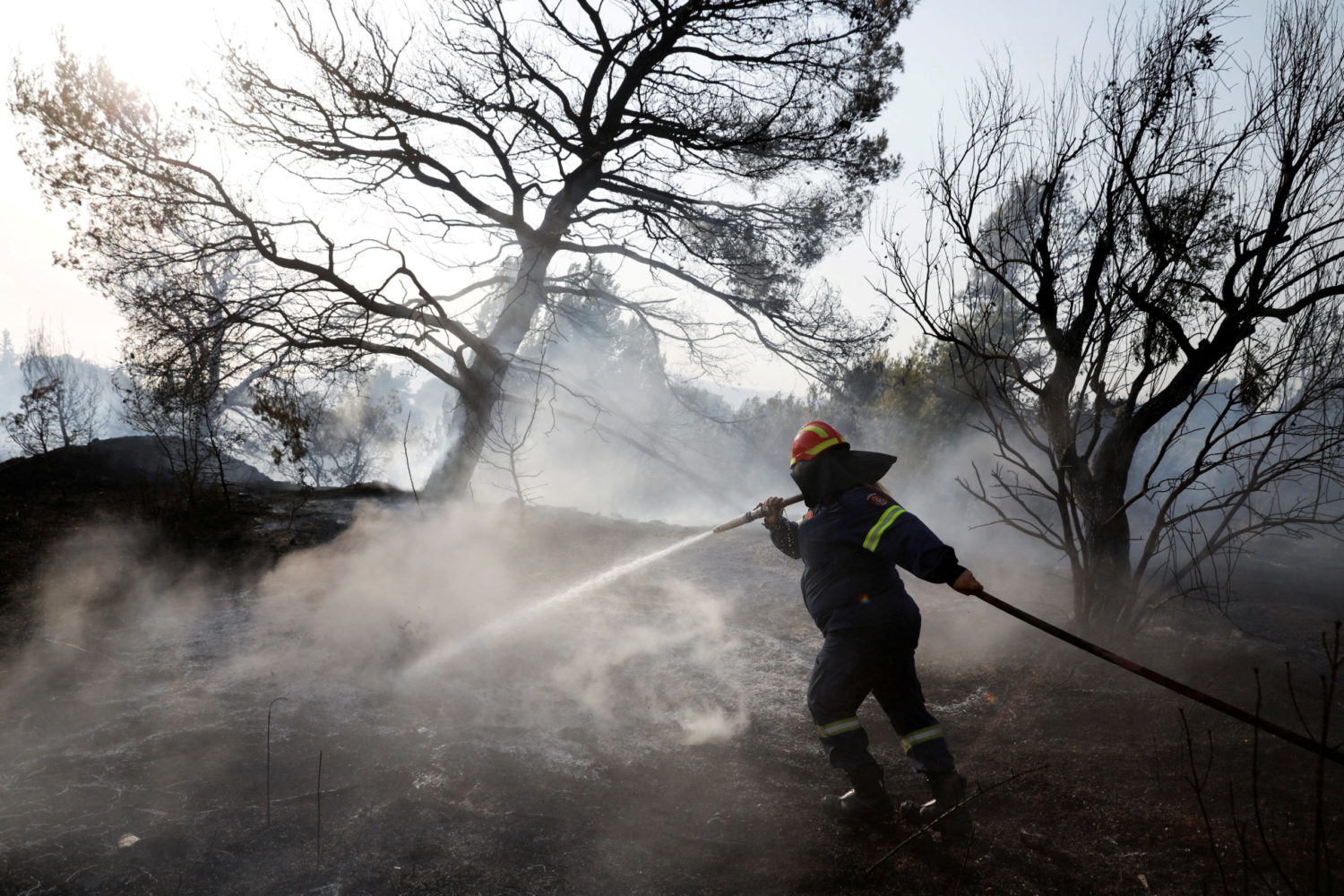 ATHENS (Reuters) -Scores of people on the Greek island of Evia fled to the shore to be evacuated by boat on Wednesday as a rapidly spreading wildfire tore through surrounding pine forests, leaving gutted buildings in its wake.

The fire, worsened by changing winds, has forced authorities on the island near Athens to evacuate several villages since late Tuesday.

Coast guard vessels picked up at least 50 people who had been evacuated from a beach close to the seaside village of Rovies on Wednesday and transferred them to a ferry, an official said.

“It was burning all night. The forest has been destroyed, villages were burned. We left behind our homes, we left our pets,” Christina Katsini, a Rovies resident, told Skai TV.

Tassos Baltas, a volunteer rescuer, said it was “raining ashes in Halkida”, Evia’s capital, some 100 km (62 miles) away.

Fires that had threatened houses on the northern outskirts of Athens on Tuesday eased slightly. But with Greece facing its most severe heatwave in 30 years, the risk remained high for the next few days in most parts of the country, authorities said.

Temperatures hovered above 40 degrees Celsius (107 Fahrenheit) for the third day.

“The weather conditions are extreme,” Deputy Citizens’ Protection Minister Nikos Hardalias said in a televised address. “We should remain on alert. We should avoid any – but any – activity that could cause a fire.”

Reinforcements arrived from Cyprus, and firefighters from France and two aircraft from Sweden were expected by Thursday, a Civil Protection Authority spokesperson said.

Fires were also burning in Halkidiki in northern Greece, the Peloponnese, in the regions of Messinia and Mani, and in Ilia, close to Ancient Olympia, which was the site of the first Olympic Games and was ordered to be evacuated.

Europe has been experiencing extreme weather this summer, from heavy flooding in the north to severe heatwaves and fires in parts of the Mediterranean, with Turkey hit by its most intense blazes on record.

Athens residents were told to stay indoors as a thick cloud of smoke hung over the city.

Fires near the town of Varympompi, north of the capital, damaged scores of buildings and destroyed more than 80 cars after breaking out on Tuesday.

“I saved my pets, that’s why I stayed,” said one Varympompi resident, Panagiotis, standing among burned cars and blackened pine trees. “I have goosebumps just talking about it; all the homes around me burned, nothing’s left.”