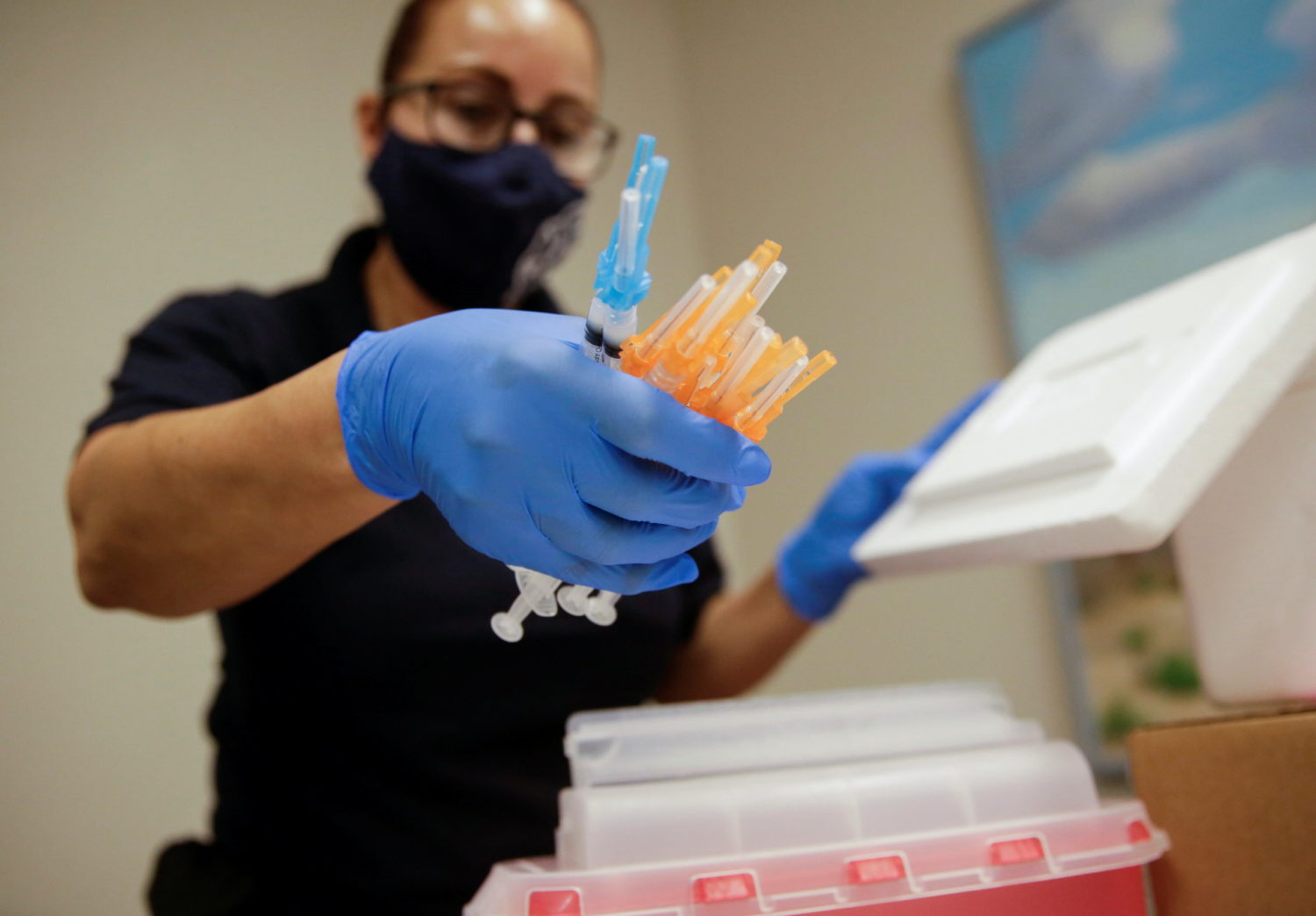 MEXICO CITY/LIMA (Reuters) – “Want the COVID-19 vaccine? Have a U.S. visa? Contact us,” reads a travel agency advertisement, offering deals to Mexicans to fly to the United States to get inoculated.

From Mexico to far-flung Argentina, thousands of Latin Americans are booking flights to the United States to take advantage of one of the world’s most successful vaccination campaigns, as rollouts in their own countries sputter.

Latin America is one of the regions worst affected by the coronavirus pandemic, with the death toll set to pass 1 million this month, and many do not want to wait any longer for their turn to get vaccinated.

Some people are going it alone, while others have tapped travel agencies, which have responded by offering packages that arrange the vaccine appointment, flights, hotel stay and even offer extras such as city and shopping tours.

“We don’t trust the public health services in this country,” said Sanchez, now back in Mexico. “If we hadn’t traveled to the United States where I felt a little more comfortable I wouldn’t have gotten vaccinated here.”

A travel agent in Mexico City organized the trip for them and an associate in Las Vegas handled things on the U.S. side, Sanchez said.

The U.S.-based associate signed them up for a vaccine appointment, then drove them to a Las Vegas convention center where they presented their Mexican passports and received their shots.

“We decided to make it a vacation and we went for a whole week, walked like crazy, ate really expensive but good food, and did some shopping,” said Sanchez.

As demand has boomed, flight prices from Mexico to the United States have risen an average of 30%-40% since mid-March, said Rey Sanchez, who runs travel agency RSC Travel World.

“There are thousands of Mexicans and thousands of Latin Americans who have gone to the United States to get vaccinated,” he said, adding that the top destinations have been Houston, Dallas, Miami and Las Vegas.

Reuters was unable to find official data on how many Latin Americans are traveling to the United States to get vaccinated. Travelers do not generally state vaccination as a reason to travel.

But U.S. cities have caught on to the trend, which is ushering much needed business into cash-strapped hotels, restaurants and other service activities.

“Welcome to New York, your vaccine is waiting for you! We’ll administer the Johnson & Johnson vaccine at iconic sites across our city,” New York City’s government announced on Twitter on May 6.

The U.S. embassy in Peru recently advised residents on Twitter that travelers could visit the United States for medical treatment, including vaccinations.

Latin Americans who had traveled on a U.S. tourist visa that Reuters spoke to said they were able to obtain shots with IDs from their home countries.

NO HOPE OF A VACCINE SOON

While initially it was mostly wealthy Latin Americans looking to travel, increasingly people with more modest means are making bookings. For many, the cost of lengthy flights makes it a major undertaking.

“I’m getting money together to travel to California in June,” said a worker at a car parts store in Lima, who asked not to be named for fear it could jeopardize his travel plans. “Considering how things are going here, there’s no hope of a vaccine shot soon.”

The slow rollout of vaccinations in most Latin American countries was a common reason cited for traveling to the United States, said Sanchez.

With little to no infrastructure to make vaccines domestically, campaigns in Latin America have been hampered by supply delays and shortages. The United States has administered nearly 262 million vaccine doses, some 2.3 times the number of shots given in all of Latin America, which has roughly twice the population, according to figures from the U.S. Centers for Disease Control and Prevention and Our World in Data.

Distrust in vaccination campaigns in Latin America is also a factor, said Sanchez.

Reports of batches of fake doses being seized by authorities or the required second dose not being available when it was time are some of the reasons Latin Americans gave for their distrust.

Vaccine tourism has fueled a jump in air travel to the United States, with fares for some last-minute flights doubling or even tripling since January, even as airlines increase capacity, according to Rene Armas Maes, commercial vice president at MIDAS Aviation, a London-based consultancy.

LATAM Airlines Group, the region’s largest carrier, said on Thursday it was seeing increased demand from South Americans seeking to travel to the United States to get vaccinated against the coronavirus.

Aeromexico said passenger traffic between Mexico and the United States increased 35% from March to April.

And American Airlines also said it had seen demand growing rapidly from parts of Latin America in recent months and it had increased capacity, particularly to Colombia, Ecuador and Mexico.

“We’re matching the increased demand in many of these markets, with additional frequencies, new routes or with the use of widebody aircraft, resulting in more capacity,” said American Airlines.

For 29-year-old Giuliana Colameo, the chance to get vaccinated was a relief after she and her boyfriend in Mexico City were both infected by the coronavirus in 2020.

They traveled to New York City where they got vaccinated at a pharmacy last month. She said they were the only two people getting the shots.

“When they give you the vaccine it’s like you almost cry. It’s a relief: it gives you hope,” said Colameo. “I feel very happy I did it and hopefully more people can do it.”