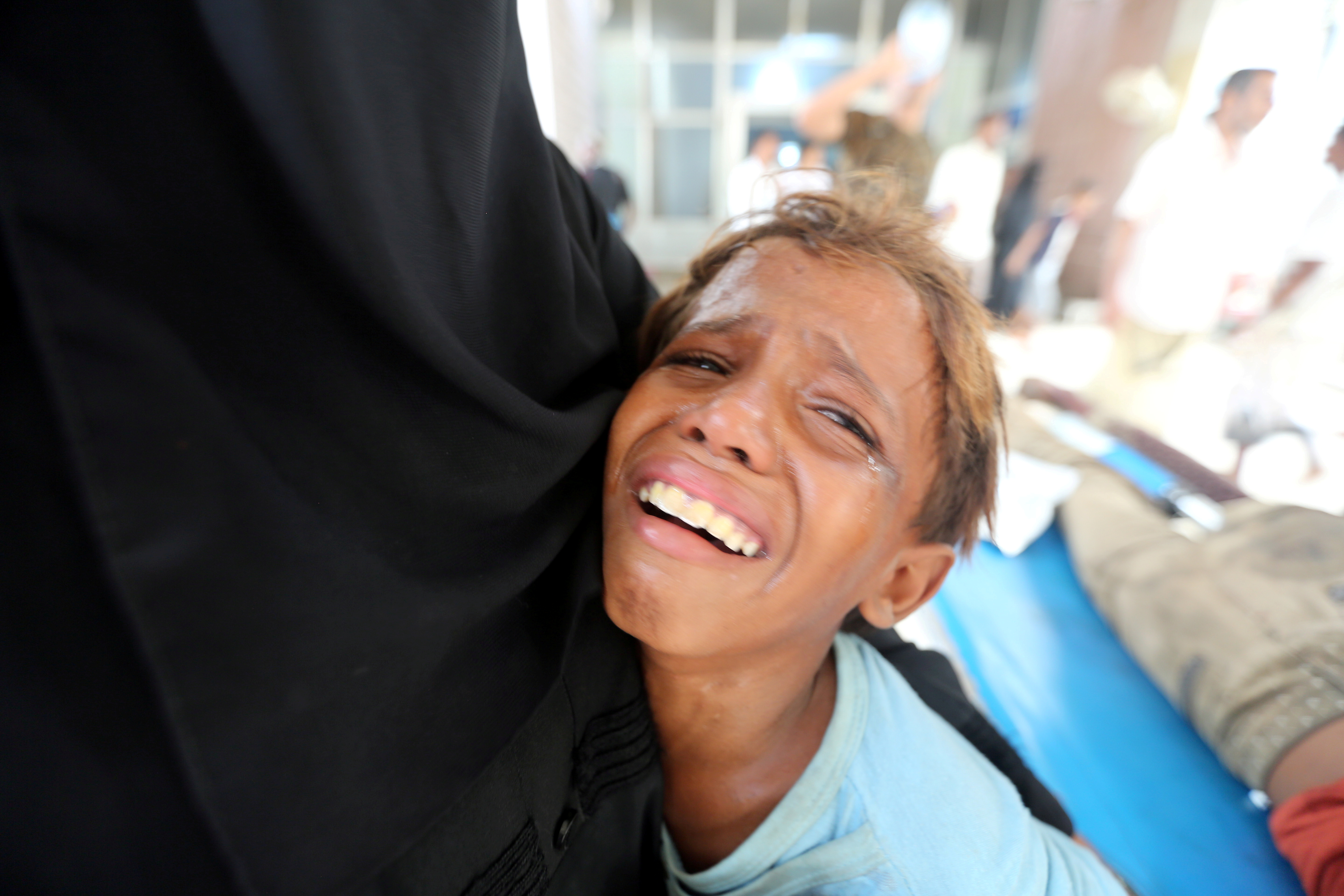 By Mohammed Ghobari and Stephanie Nebehay

ADEN, Yemen/GENEVA (Reuters) – Yemeni forces backed by the Saudi-led coalition launched on Friday a “vast offensive” to take full control of the port city of Hodeidah, the internationally recognized government based in the southern city of Aden said.

The announcement came as the United Nations High Commissioner for Refugees (UNHCR) warned that many people remained trapped in the city by the fighting. It also said nearly half a million people have fled the area since June.

“A military operation has begun and the national army forces have advanced towards the north and the western sides of the city of Hodeidah, progressing on all fronts with the support of the Arab coalition,” the government said in a statement.

“Fierce battles are taking place at these moments.”

The Red Sea port of Hodeidah has become a key battleground in Yemen’s nearly four-year-long war, which pits the Saudi-led coalition against the Iran-allied Houthis, who control the capital Sanaa. The Houthis have held Hodeidah since 2014.

Hours after Friday’s announcement of a new offensive, residents said the progress of coalition forces appeared limited. They said the Houthis had withdrawn from a hospital in the eastern suburbs of Hodeidah where fighting has been concentrated in recent days but they remained in the area.

The Houthis raided the May 22 hospital earlier this week, posting gunmen on its rooftop, according to rights groups who voiced alarm for the fate of the medical staff and patients.

U.N. bodies have warned that an all-out attack on Hodeidah, an entry point for 80 percent of Yemen’s food imports and aid relief, could trigger famine in the impoverished state.

The United States and Britain, which provide arms and intelligence to the Saudi-led coalition, have stepped up calls for a ceasefire in Yemen, raising pressure on Riyadh as it faces a global outcry over the murder of a prominent Saudi journalist in the Saudi consulate in Istanbul on Oct. 2.

The UNHCR expressed alarm over the fate of unknown numbers of people trapped in Hodeidah by the latest fighting.

“As testament to how dire the situation is, some 445,000 people from al-Hodeidah Governorate have been forced to flee since June, according to UN data,” spokeswoman Shabia Mantoo told a news briefing in Geneva on Friday.

Some of them have fled to other parts of Hodeidah province and some to other areas of Yemen, she told Reuters.

The province of Hodeidah, including the port city, had a population of 2.6 million in 2011, four years before the civil war erupted, according to Yemeni statistics.

“While the number of those remaining in Hodeidah city is difficult to gauge, UNHCR is worried that people needing to flee for safety aren’t able to do so. They are trapped by military operations, which are increasingly confining populations and cutting off exit routes,” Mantoo said.

The UNHCR appealed to all sides to allow access to its warehouse stocked with emergency shelter and essential aid items that it said had been cut off by an active front line.

The U.N.’s World Food Programme (WFP) said on Thursday it planned to double its food assistance program for Yemen, aiming to reach up to 14 million people “to avert mass starvation”.

Saudi Arabia is leading a Western-backed alliance of Sunni Muslim Arab states to try to restore Yemeni President Abd-Rabbu Mansour Hadi and his internationally recognized government that was ousted by the Houthis in 2015.

The government has fled to Aden, but Hadi and other cabinet members are based in the Saudi capital Riyadh.

The United Nations has no up-to-date estimate of the death toll in Yemen. It said in August 2016 that according to medical centers at least 10,000 people had been killed.

The United Nations’ Yemen envoy Martin Griffiths hopes to convene Yemen’s warring parties for peace talks by the end of the year.

(Additional reporting by Mohammed Mukhashef in Aden and Maher Chmaytelli in Dubai; Editing by Gareth Jones) 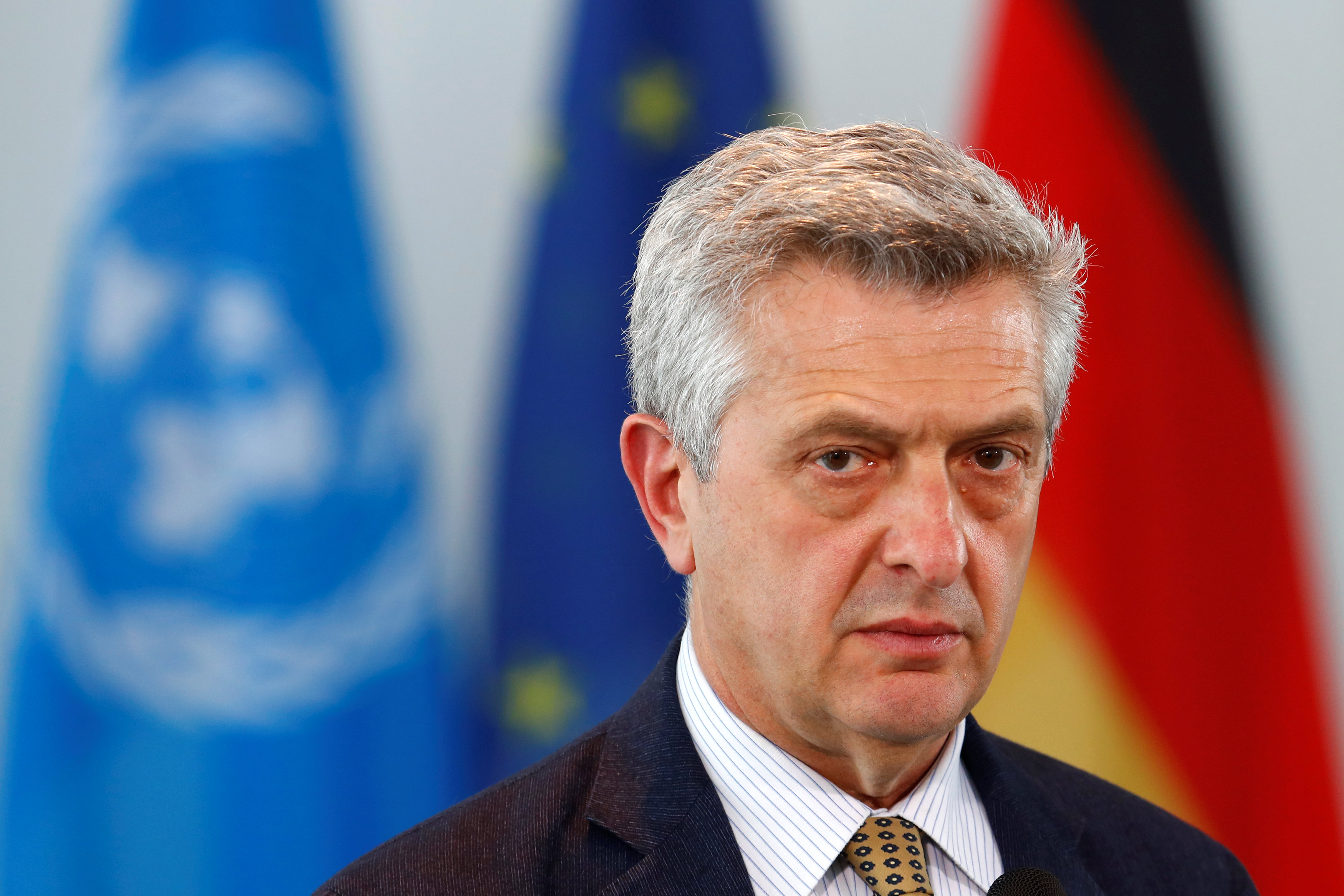 BRUSSELS (Reuters) – Civilians can no longer flee fighting and bombing raids in Syria because borders are so tightly controlled and neighboring countries are overwhelmed by refugees, creating some of the worst suffering in modern times, a top U.N. agency chief said.

U.N. High Commissioner for Refugees Filippo Grandi was warning of a new disaster if the rebel-controlled Syrian city of Idlib was the next target of the Syrian military.

“The country is becoming a trap, in some places a death trap for civilians,” Grandi told Reuters during a donor conference for Syria.

“There is an entire population out there that cannot bear its refugees anymore, that is suffering from one of the worse ordeals in modern history.”

The Syrian Observatory for Human Rights, a British-based war monitor, said last month about 511,000 people had been killed in the war since it began in March 2011.

Some 5.5 million Syrians are living as refugees in Iraq, Jordan, Lebanon and Turkey, and now account for a quarter of Lebanon’s population. Another 6.1 million people are still in Syria but have been forced to flee their homes.

Grandi is hoping to raise $5.6 billion from international donors for emergency humanitarian aid for Syrian refugees this year, but that money is not for Syria itself, instead going to help host countries such as Jordan, Iraq, Egypt and Lebanon.

Meanwhile, the United Nations estimates that more than 400,000 civilians trapped in besieged areas throughout Syria.

That the number could rise dramatically because 2 million people live in northwestern Idlib region, the largest populated area of Syria in the hands of insurgents fighting Syrian President Bashar al-Assad’s government in Damascus.

Some aid agencies are predicting suffering on an even greater scale than during the siege of Aleppo last year and in eastern Ghouta and Raqqa this year if the Syrian army and its Russian and Iranian backers turn their full fire on Idlib.

Tens of thousands of fighters and civilians have fled to the area from parts of the country which the army has recaptured with the help of Russia and Iran.

“Idlib is where an area where a lot of fighters have transferred,” Grandi said. “If fighting moves more decisively to that area, it could be very dangerous for civilians.”

However, Grandi and other aid agencies predict they will have nowhere to flee to because Turkey’s southern border with Syria at Gaziantep is tightly controlled, mainly letting aid supplies through to Idlib, forcing refugees deeper into Syria.

“I think we are going to lose not only a generation but a population,” Grandi said.