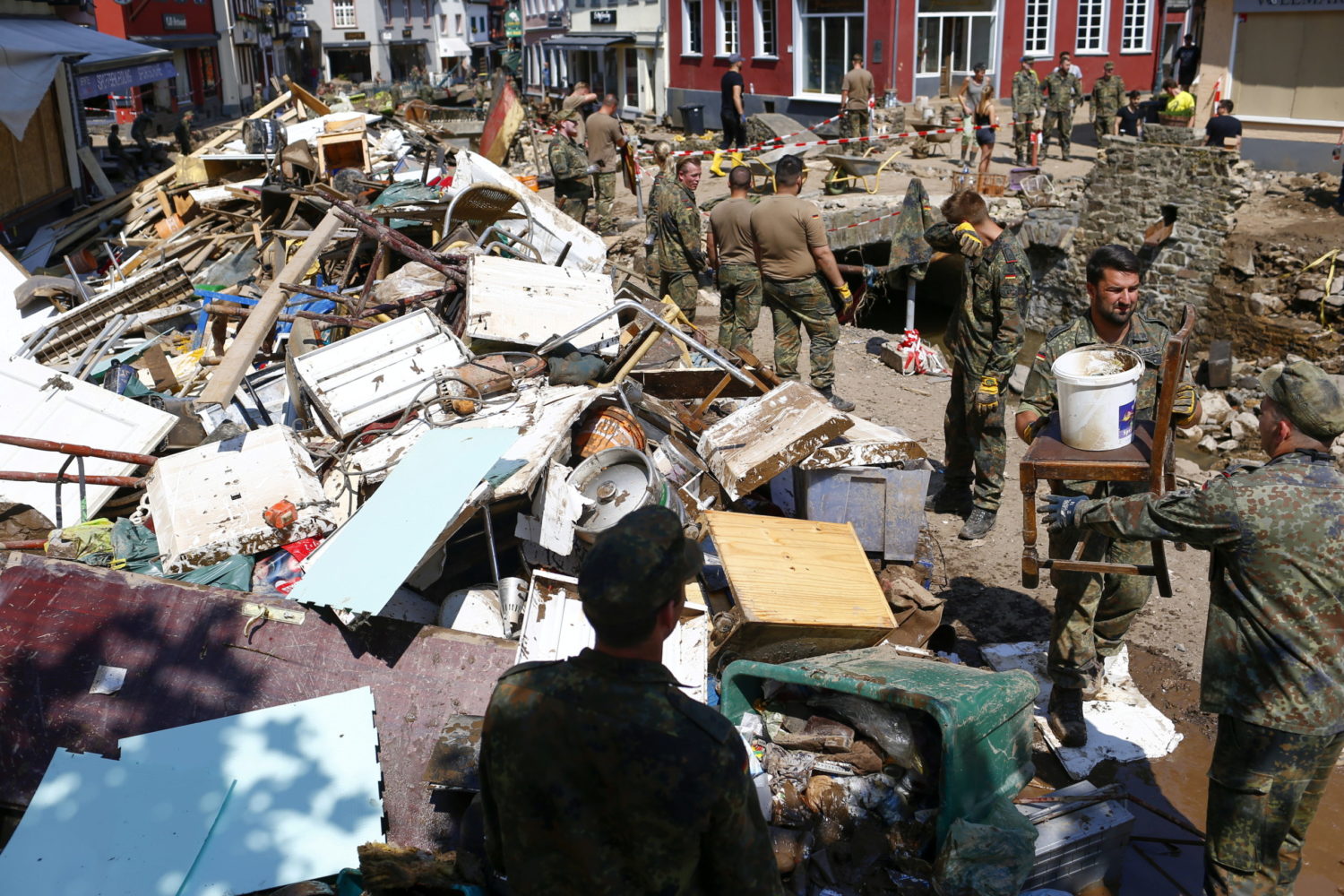 By Andi Kranz and Leon Kuegeler

BAD NEUENAHR, Germany (Reuters) – Germany’s most devastating floods in 60 years have created mountains of trash, from broken fridges to wrecked cars, piled up on roadsides and in makeshift dumps. Disposing of it could take weeks and local leaders have appealed for help.

Amid the stench and fear of disease, the country that pioneered modern waste management is struggling to cope with the tens of thousands of tonnes of wreckage strewn across the towns and villages of its western Rhinelands after the heaviest 24-hour deluge on record.

The flooding claimed at least 180 lives.

A week on, much of the trash has been heaped into piles so that streets are passable or carted off to makeshift dumps.

For resident Hans-Peter Bleken in Bad Neuenahr, a wine-growing hub in Rhineland-Palatinate that was one of the towns worst hit, a clean-up operation led by the fire brigade and army has been a “brilliant help”.

“The next big problem is going to be the huge piles of household rubbish,” he told Reuters, saying the stench from rotting food waste was everywhere.

“We have beaten corona but if we now get the bacteria, the rats and more viruses then that will be our problem.”

Germany pioneered modern waste management in the 1970s, introducing the concept of separating rubbish to go for recycling, incineration or into landfill.

Yet the sheer amount of trash is far more than the waste-management industry can cope with. Construction firms and farmers are helping to shift wreckage, but with storage facilities full up, temporary dumps are having to be found.

“The greatest challenge is the huge amounts of bulky waste,” said Anna Ephan, a spokesperson for Remondis, the largest private waste management company in Germany. “The amounts are inconceivable.”

In Germany’s most populous state of North Rhine-Westphalia, governor Armin Laschet told a news conference on Thursday: “It won’t be possible to dispose of all the waste locally. We need wider help.”

Laschet is the conservative candidate to succeed Chancellor Angela Merkel at a general election in September. A poll this week for Spiegel magazine found 60% of Germans considered Laschet to be a poor crisis manager.

The cathedral city of Cologne, the state’s largest city with a population of more than a million, has issued an appeal on Facebook for help to clear “unimaginable quantities” of trash.

“The districts and households affected need urgent support to quickly cope with this task, as our existing infrastructure is already exhausted,” read the appeal, which included a hotline number for helpers to call.

Most of the rubbish will have to be incinerated, but with municipal and commercial facilities running more or less flat out before the flood catastrophe, there is scant spare capacity.

“This is coming on top of all the rubbish that we already process – and it’s unexpected,” said Bernhard Schodrowski of the BDE waste-management industry association.

There are huge challenges to safely store the rubbish to minimize the risk of disease, said Schodrowski, while many companies in the sector are also battling to restore supplies of clean water and repair sewage systems.

“We’re hopeful but it will be a question of weeks before we are able to master this challenge,” said Schodrowski.