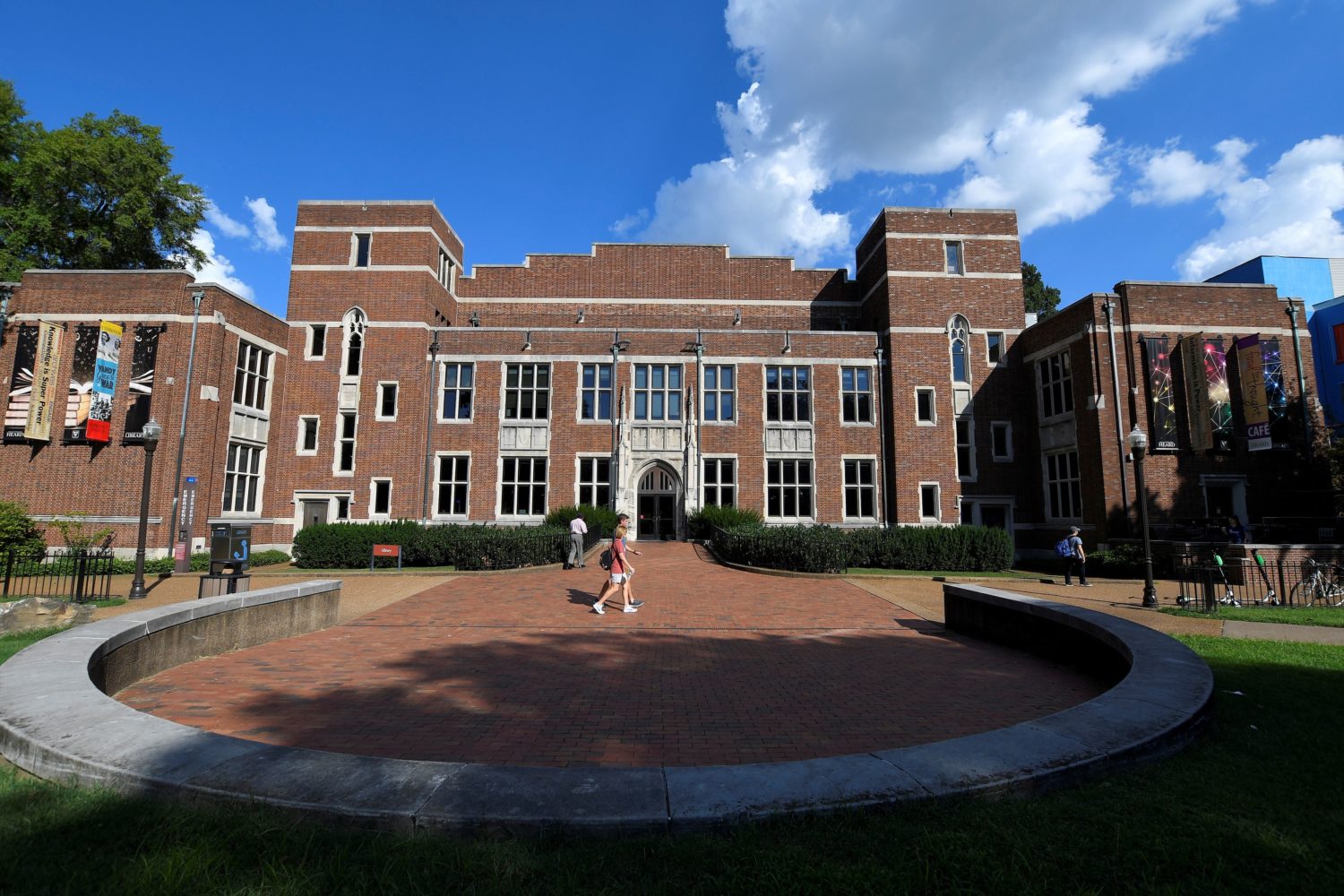 By Anna Irrera and Steve Stecklow

(Reuters) – Like many American colleges, Vanderbilt University in Nashville announced last month it was closing its dormitories and putting classes online because of the growing threat of coronavirus. It said it was acting “out of an abundance of caution” after a local healthcare worker had tested positive for the disease.

The message was lost on many students.

Before leaving campus and returning to their homes and families throughout the United States and abroad, more than 100 Vanderbilt students attended parties, ignoring the school’s explicit instructions not to do so. They crowded into apartment complexes and other locations, and posed for group pictures they posted on Instagram. Many celebrated St. Patrick’s Day six days early – on the same day New York City announced it was cancelling its traditional annual parade.

One photo of a March 11 party, posted on Instagram and seen by Reuters, shows a student in a makeshift hazmat suit, a black mask and green bowler hat with shamrocks, as a large group of students party in the background. “I dare you to give me corona,” reads the picture’s caption. The photo’s location jokingly claims to be “Wuhan, China” — the origin of the global pandemic.

Some Vanderbilt students later learned they were infected with the virus, known as COVID-19. A private online group of students who say they have contracted coronavirus had 107 members this week, with most stating they had mild or moderate symptoms, according to posts seen by Reuters. Vanderbilt University Medical Center, an independent hospital near the campus, also reported 86 employees have tested positive for coronavirus to date, according to a spokeswoman.

The example of Vanderbilt – a prestigious, private research institution in America’s South – shows that risky behavior by some young people extended far beyond the spring break mob scenes on Florida beaches that emerged last month. It illustrates the role students at some colleges – particularly those with a global footprint – have played in the pandemic.

In a statement, Vanderbilt said: “Just as for our peers around the country, COVID-19 has created unprecedented challenges for our community as we have sought, above all, to protect the health and safety of our students, faculty and staff. Vanderbilt has regularly communicated with our community about the essential steps the university is taking, and that they must take, to limit the spread of disease.”

The university declined to answer questions about how many students have contracted coronavirus, citing federal student privacy law.

Vanderbilt began its spring break earlier than many schools. It took place between Feb. 29 and March 8, a time in which the pandemic, which began in China, was beginning to seriously affect Europe, but hadn’t yet significantly hit the United States.

“Vandy” is an elite school with a large cohort of well-to-do students. Many travel abroad during spring break, especially Europe. They often visit other Vanderbilt students attending study-abroad programs.

On Feb. 25, Vanderbilt warned students not to travel to China or South Korea – two coronavirus hot spots – and to reconsider making non-essential trips to other countries with serious outbreaks. International students were advised not to leave the United States at all.

One country that hadn’t yet reported many cases was Spain. Max Schulman, a Vanderbilt junior, said he traveled to Barcelona with more than a dozen classmates and estimated that about 50 Vanderbilt students in all were there during spring break. Spain has since emerged as one of the epicenters of the global outbreak.

Schulman said he felt tired, restless and “delirious” on his flight back. Instead of returning to campus, he went to his family’s home in Long Island, New York, and later tested positive for coronavirus.

Other Vanderbilt students who traveled to Spain and other European countries returned to the Nashville campus.

On March 8, an online petition started by Chinese first-year student Yihan Li asked Vanderbilt to cancel classes to protect students’ health, as the number of infections in the Nashville area slowly rose. “There have been two confirmed cases in Nashville and our students are returning from all over the world after the spring break,” the petition stated. “It is at great risk to hold classes as normal.” More than 2,000 people signed. Vanderbilt has about 12,000 full-time undergraduate and graduate students, according to its website.

The same day, the university informed students that there were no confirmed cases on campus. It also noted that an unidentified student who had studied abroad but hadn’t returned to Nashville had tested positive. The announcement followed a story in the campus newspaper, the Vanderbilt Hustler, that a student in a program in Italy had later tested positive in Chicago.

Classes resumed on Monday, March 9. By the end of the day, the school disclosed that several students on campus reported they had been exposed to an unidentified individual who tested positive that day. It announced it was cancelling classes for the rest of the week and would soon move them online through March. The announcement added: “To be clear, the university will remain open.”

At the time, scores of other American colleges and universities were taking steps to cancel classes and switch to online instruction, according to data compiled by Bryan Alexander, a senior scholar at Georgetown University.

A picture of Vanderbilt’s announcement appeared on a satirical Instagram account with this comment: “Let spring break pt. 2 begin.” That night, some students began partying to both commiserate and celebrate over the end of classes, one student told Reuters.

On March 10, Vanderbilt issued a warning to campus residents: “There should be no parties/gatherings; students are encouraged to maintain social distance and minimize interactions with others.” The college was two days ahead of Nashville’s mayor in urging social distancing.

Some seniors worried their college days were coming to an abrupt end and the campus would soon clear out, students said. Their fears soon came true: On March 11, Vanderbilt told students that a healthcare worker at Vanderbilt University Medical Center had tested positive and classes would go on line for the rest of the semester. Undergraduates living on campus should leave within four days.

Planned St. Patrick’s Day parties were moved up. The event is an annual tradition for many Vanderbilt students, who refer to it as “St Fratty’s” because many parties are held at fraternity houses.

“We’re all here and we’re ready to fire one last time before our college careers are ended” by coronavirus, stated one Facebook post announcing an off-campus St Patrick’s Day party. Several students who attended the party later tested positive for coronavirus, according to a student. Reuters could not independently confirm this.

Another “St Fratty’s” celebration kicked off in the rooftop courtyard of Wesley Place apartments, a residential complex that is home to third-year and fourth-year students. Instagram pictures depict clusters of students clad in green, chatting in close proximity, drinking from beer cans and red cups, and posing together for pictures.

In one photo, a group of seven young women dressed in green huddle together, hugging and holding hands. A photo collage posted by Vanderbilt’s chapter of the Kappa Kappa Gamma sorority showed small groups of young, green-clad women smiling, hugging and posing for pictures. The sorority didn’t respond to a request for comment.

Following the Wesley Place party, students dispersed to other locations, including off-campus fraternity houses and another apartment complex, according to students and social media posts.

One video shows several dozen students in a backyard dancing, hugging and drinking. Text overlaying the video reads, “Schools out forever,” while the caption reads, “the luck of the Irish did not grace Vanderbilt this st frattys.”

That same day, March 11, three news developments smashed America’s complacency about the disease. President Donald Trump imposed a 30-day ban on foreigners traveling from Europe, the National Basketball Association suspended its season, and movie star Tom Hanks announced he and his wife had tested positive for coronavirus in Australia.

Some Vanderbilt students soon were reporting in private chat groups that they had contracted coronavirus.

A private group called “Covid Family” that consists of students who said they had contracted the virus grew to 107 members. In one poll of 80 students, a dozen answered “yes” to whether they had coronavirus, according to a screenshot. Reuters couldn’t determine if the self-reported diagnoses were accurate.

One infected student interviewed by Reuters attended off-campus parties and experienced symptoms on March 15 after returning home. The student’s mother also developed mild symptoms. The student said the exact source of the infection was impossible to know.

Sophia Yan, a first-year Vanderbilt student from China, told Reuters she found out she had contracted coronavirus upon returning home to the Chinese city of Shenzhen on March 17. She said she didn’t attend any parties on campus, leading her to suspect the virus was more widespread at Vanderbilt than students and the administration realize.

She said she believes the university should have required students to report all their travels during spring break and released information about any who had tested positive, such as their whereabouts and what classes they attended.

“Unfortunately, Vanderbilt’s lack of effective measures largely reflects how the United States as a whole is dealing with this crisis,” she said. “To combat this pandemic, U.S. federal and state governments, as well as the American people, must recognize the severity and urgency of the matter.”

Vanderbilt didn’t respond to a specific question about Yan’s comments.

But it said because of federal student privacy law, “we are unable to disclose widely within the Vanderbilt community personally identifiable information about any student who has tested positive for COVID-19.”

Netra Rastogi, a Vanderbilt sophomore, doesn’t fault the administration. “I don’t think they realized that so many students at Vanderbilt wouldn’t take this whole situation seriously.”