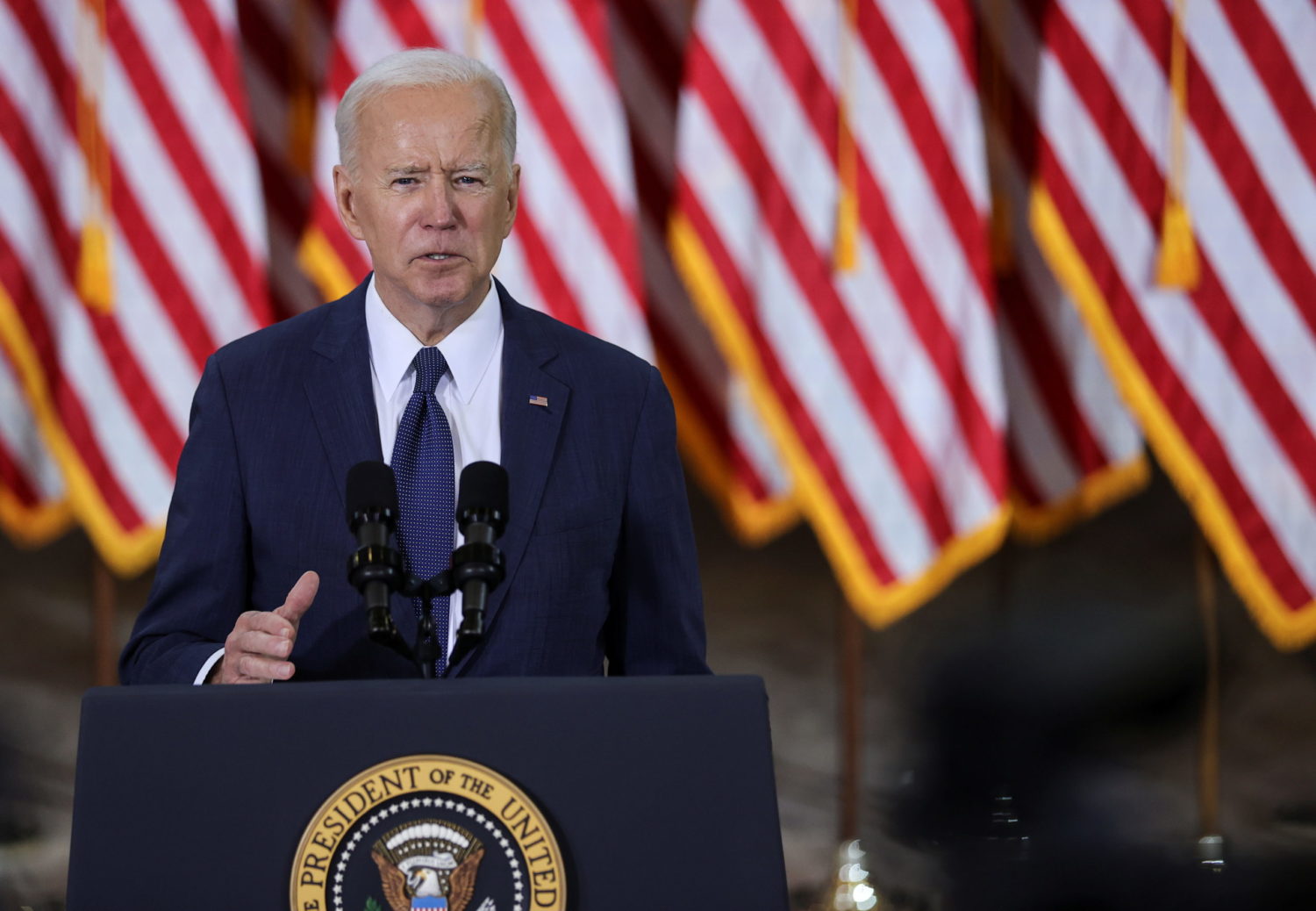 By Steve Holland and Jarrett Renshaw

PITTSBURGH (Reuters) -President Joe Biden on Wednesday called for a sweeping use of government power to reshape the world’s largest economy and counter China’s rise in a $2 trillion-plus proposal that was met with swift Republican resistance.

The president’s “American Jobs Plan” would put corporate America on the hook for the tab as the government creates millions of jobs building infrastructure, such as roads, tackles climate change and boosts human services like care for the elderly.

“It’s a once-in-a-generation investment in America, unlike anything we’ve seen or done since we built the interstate highway system and the space race decades ago,” Biden said in unveiling the program in Pittsburgh.

He said he had no problem asking companies to foot the bill and is “gonna put an end” to Amazon.com Inc and other major companies paying little to nothing in federal taxes.

Biden’s second multitrillion-dollar legislative proposal in two months in office sets the stage for a partisan clash in the U.S. Congress, where members largely agree that investments are needed but are divided on the total size and inclusion of programs traditionally seen as social services.

Another economic proposal Biden will release in April could add a further $2 trillion to the total price tag.

Coupled with his recently enacted $1.9 trillion coronavirus relief package, Biden’s infrastructure initiative would give the federal government a bigger role in the U.S. economy than it has had in generations, accounting for 20% or more of annual output.

Biden’s team believes a government-directed effort to strengthen the economy is the best way to provide support to an economy walloped by the coronavirus pandemic and contend with increased competition and a national security threat posed by China.

The proposal was greeted icily by conservatives and major business groups.

Republican Senator Mitch McConnell said the proposal was “another Trojan horse for far-left demands” one day after Biden called to brief the minority leader on the proposal. McConnell said raising taxes would be “killing jobs and slowing wage growth when workers need a fast recovery.”

Biden is ignoring a campaign promise to raise taxes on wealthy individuals, at least for now.

The plan would instead increase the corporate tax rate to 28% from 21% and change the tax code to close loopholes that allow companies to move profits overseas, according to a 25-page briefing paper released by the White House.

Biden said the goal was not to “target” businesses but to address divisions and inequality worsened by the pandemic.

The plan would spread the cost for projects over an eight-year period and aims to pay for it all over 15 years, without adding to the country’s long-term debt, the White House said.

Neil Bradley, chief policy officer at the nation’s largest trade group, the U.S. Chamber of Commerce, said while the organization shares Biden’s sense of urgency on infrastructure, his plan is “dangerously misguided.”

“We strongly oppose the general tax increases proposed by the administration which will slow the economic recovery and make the U.S. less competitive globally,” Bradley said.

The plan includes $621 billion to rebuild infrastructure, such as bridges, highways and ports, and a historic $174 billion investment in the electric vehicle market that sets a goal of building a nationwide charging network by 2030.

Congress will be asked to invest $400 billion in expanding access to affordable community-based care for aging Americans and people with disabilities. It is aimed at low-wage workers in that industry, who are disproportionately women of color.

There is $213 billion included to build and retrofit environmentally sustainable homes along with hundreds of billions to support U.S. manufacturing, bolster the nation’s electric grid, enact nationwide high-speed broadband and revamp the nation’s drinking water systems.

Biden is moving forward with the economic plan while attempting to deliver on promises to provide enough COVID-19 vaccines for all American adults by the end of May. The White House is also dealing with a rise in the number of migrants at the southern border and fallout from back-to-back mass shootings.

The plan forms one part of the “Build Back Better” agenda that the administration aims to introduce. A second legislative package being marketed as helping families is due within weeks.

That package is expected to include the expansion of health insurance coverage and child tax benefits, as well as paid family and medical leave.

House of Representatives Speaker Nancy Pelosi has signaled she hopes to pass the infrastructure plan by July 4, although that time line could easily slip as Democrats with narrow majorities in both the House and Senate race to strike a deal on the details.

The jockeying has already begun. Moderate Democrats have said the package should be more targeted to traditional infrastructure projects to attract Republican votes. Liberal lawmakers want to tackle climate change and economic inequality with resources that reflect the size of those challenges.

Representative Pramila Jayapal, a leading liberal Democrat, said on Tuesday that the proposal Biden laid out as a presidential candidate was between $6.5 trillion and $11 trillion over 10 years.

“We’d like to see a plan that goes big,” Jayapal said. 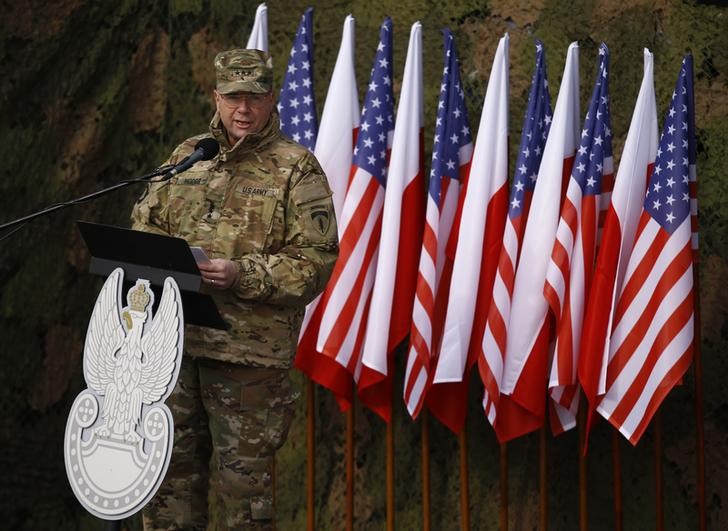 BERLIN (Reuters) – U.S. allies in eastern Europe and Ukraine are worried that Russia’s planned war games in September could be a “Trojan horse” aimed at leaving behind military equipment brought into Belarus, the U.S. Army’s top general in Europe said on Thursday.

Russia has sought to reassure NATO that the military exercises will respect international limits on size, but NATO and U.S. official remain wary about their scale and scope.

U.S. Army Lieutenant General Ben Hodges, who heads U.S. Army forces in Europe, told Reuters in an interview that allied officials would keep a close eye on military equipment brought in to Belarus for the Zapad 2017 exercise, and whether it was removed later.

“People are worried, this is a Trojan horse. They say, ‘We’re just doing an exercise,’ and then all of a sudden they’ve moved all these people and capabilities somewhere,” he said.

Hodges said he had no indications that Russia had any such plans, but said greater openness by Moscow about the extent of its war games would help reassure countries in eastern Europe.

“This artificial buffoonery over the routine Zapad-2017 exercises is aimed at justifying the sharp intensification of the NATO bloc (activities) along the perimeter of Russian territory,” Russian Deputy Foreign Minister Grigory Karasin told the Interfax news agency on Friday.

Such tactics were later used in Russia’s annexation of Crimea in 2014, its support for separatists in eastern Ukraine and in its intervention in Syria, NATO diplomats say.

Hodges said the United States and its allies had been very open about a number of military exercises taking place across eastern Europe this summer involving up to 40,000 troops, but it remained unclear if Moscow would adhere to a Cold War-era treaty known as the Vienna document, which requires observers for large-scale exercises involving more than 13,000 troops.

Some NATO allies believe the Russian exercise could number more than 100,000 troops and involve nuclear weapons training, the biggest such exercise since 2013.

Russia has said it would invite observers if the exercise exceeded 13,000 forces.

Hodges said NATO would maintain normal rotations during the Russian war game, while carrying out previously scheduled exercises in Sweden, Poland and Ukraine.

The only additional action planned during that period was a six-week deployment of three companies of 120 paratroopers each to Estonia, Latvia and Lithuania for “low-level” exercises, Hodges said.

“We want to avoid anything that looks like a provocation. This is not going to be the ‘Sharks’ and the ‘Jets’ out on the streets,” Hodges said in a reference to the gang fights shown in the 1961 film “West Side Story” set in New York City.