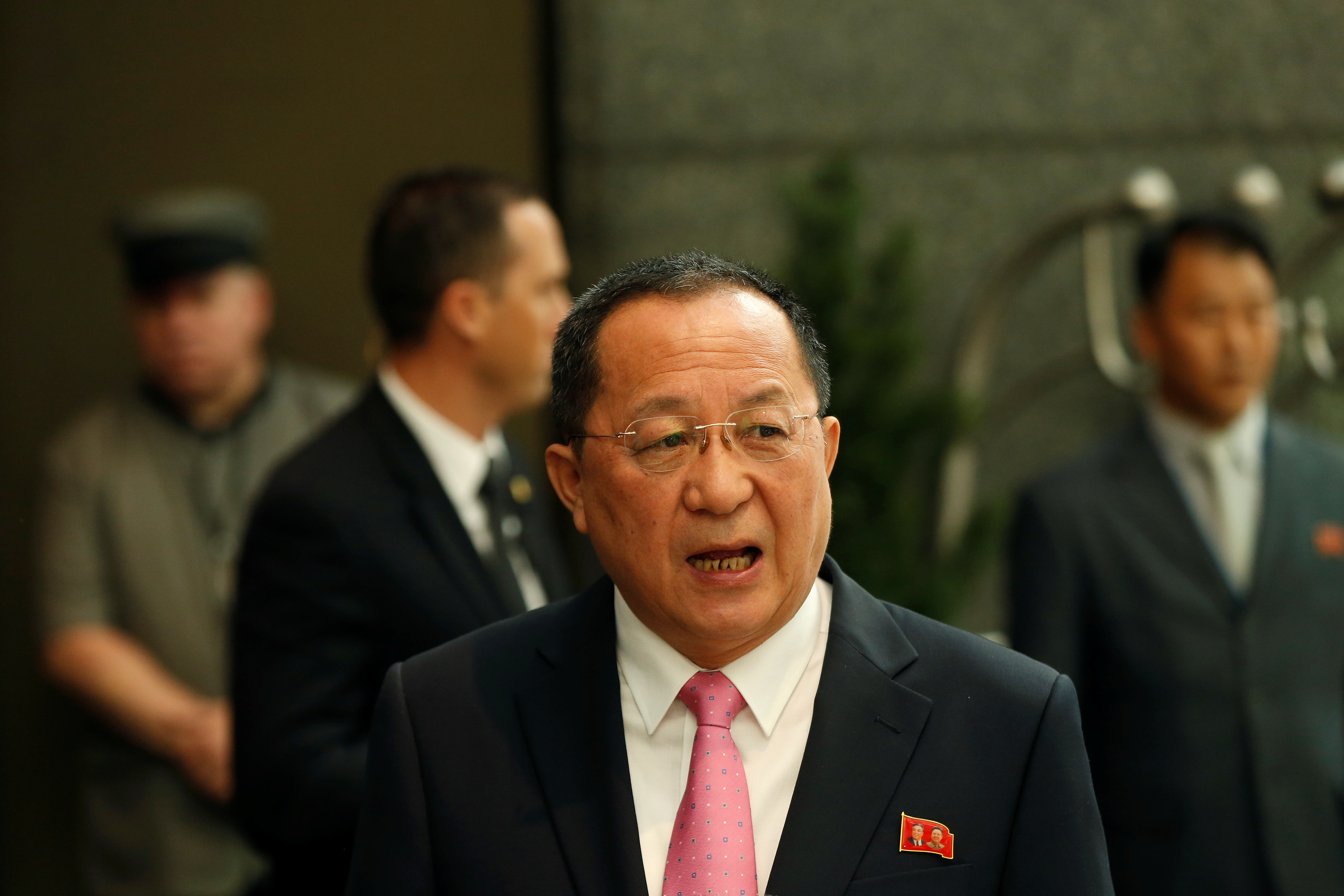 UNITED NATIONS/BEIJING/SEOUL (Reuters) – North Korea’s foreign minister said on Monday that President Donald Trump had declared war on North Korea and that Pyongyang reserves the right to take countermeasures, including shooting down U.S. bombers even if they are not in its air space.

“The whole world should clearly remember it was the U.S. who first declared war on our country,” Foreign Minister Ri Yong Ho told reporters in New York.

“Since the United States declared war on our country, we will have every right to make countermeasures, including the right to shoot down United States strategic bombers even when they are not inside the airspace border of our country,” Ri said.

“The question of who won’t be around much longer will be answered then,” Ri said in a direct reference to a Twitter post by Trump on Saturday.

The increasingly heated rhetoric between Trump and North Korean leader Kim Jong Un is raising fears of a risk of a miscalculation by one side or the other that could have massive repercussions.

China called on Monday for all sides in the North Korea missile crisis to show restraint and not “add oil to the flames.”

Ri told the U.N. General Assembly on Saturday that targeting the U.S. mainland with its rockets was inevitable after “Mr Evil President” Trump called Kim a “rocket man” on a suicide mission.

“Just heard Foreign Minister of North Korea speak at U.N. If he echoes thoughts of Little Rocket Man, they won’t be around much longer!” Trump said on Twitter on Saturday.

North Korea, which has pursued its missile and nuclear programs in defiance of international condemnation and economic sanctions, said it “bitterly condemned the reckless remarks” of Trump. They were an “intolerable insult to the Korean people” and a declaration of war, the North’s official news agency said on Monday.

Pyongyang accuses the United States, which has 28,500 troops in South Korea, a legacy of the 1950-53 Korean war, of planning to invade and regularly threatens to destroy it and its Asian allies. The United States and South Korea are technically still at war with North Korea because the 1950s conflict ended with a truce, not a peace treaty.

In an unprecedented direct statement on Friday, Kim described Trump as a “mentally deranged U.S. dotard” whom he would tame with fire.

Kim said North Korea would consider the “highest level of hard-line countermeasure in history” against the United States and that Trump’s comments had confirmed his nuclear program was “the correct path”.

Trump threatened in his maiden U.N. address last Tuesday to “totally destroy” the country of 26 million people if North Korea threatened the United States or its allies.

Asked how concerned China was the war of words between Trump and North Korea could get out of control, Foreign Ministry spokesman Lu Kang described the situation as highly complex and sensitive.

It was vitally important everyone strictly, fully and correctly implemented all North Korea related U.N. resolutions, Lu said, resolutions which call for both tighter sanctions and efforts to resume dialogue.

All sides should “not further irritate each other and add oil to the flames of the tense situation on the peninsula at present”, Lu told a daily news briefing.

“We hope all sides do not continue doing things to irritate each other and should instead exercise restraint.”

China hopes Britain can play a constructive role in easing the situation and pushing for a resumption in talks, Xi said. May, like some other U.S. allies, has pushed for China to do more on North Korea.

Downing Street said the two leaders agreed there was a particular responsibility for China and Britain, as permanent Security Council members, to help find a diplomatic solution.

North Korea conducted its sixth and most powerful nuclear bomb test on Sept. 3. Pyongyang said on Friday it might test a hydrogen bomb over the Pacific Ocean.

While China has been angered by North Korea’s repeated nuclear and missile tests, it has also called for the United States and its allies to help lessen tension by dialing back their military drills.

U.S. Air Force B-1B Lancer bombers escorted by fighters flew in international airspace over waters east of North Korea on Saturday in a show of force the Pentagon said indicated the range of military options available to Trump.

In response to a question about the exercises, Chinese spokesman Lu said: “A continued rise in tensions on the peninsula, I believe, is not in the interests of any side.”

Japanese Prime Minister Shinzo Abe on Monday said his decision to call a snap election would not distract his government from responding to North Korean threats.

(Reporting by Michelle Nichols at the United Nations, Ben Blanchard in Beijing and Christine Kim in Seoul; Additional reporting by Shu Zhang in Beijing, Elizabeth Piper in London and Kiyoshi Takenaka in Tokyo; Writing by Philip Wen; Editing by Nick Macfie and Grant McCool) 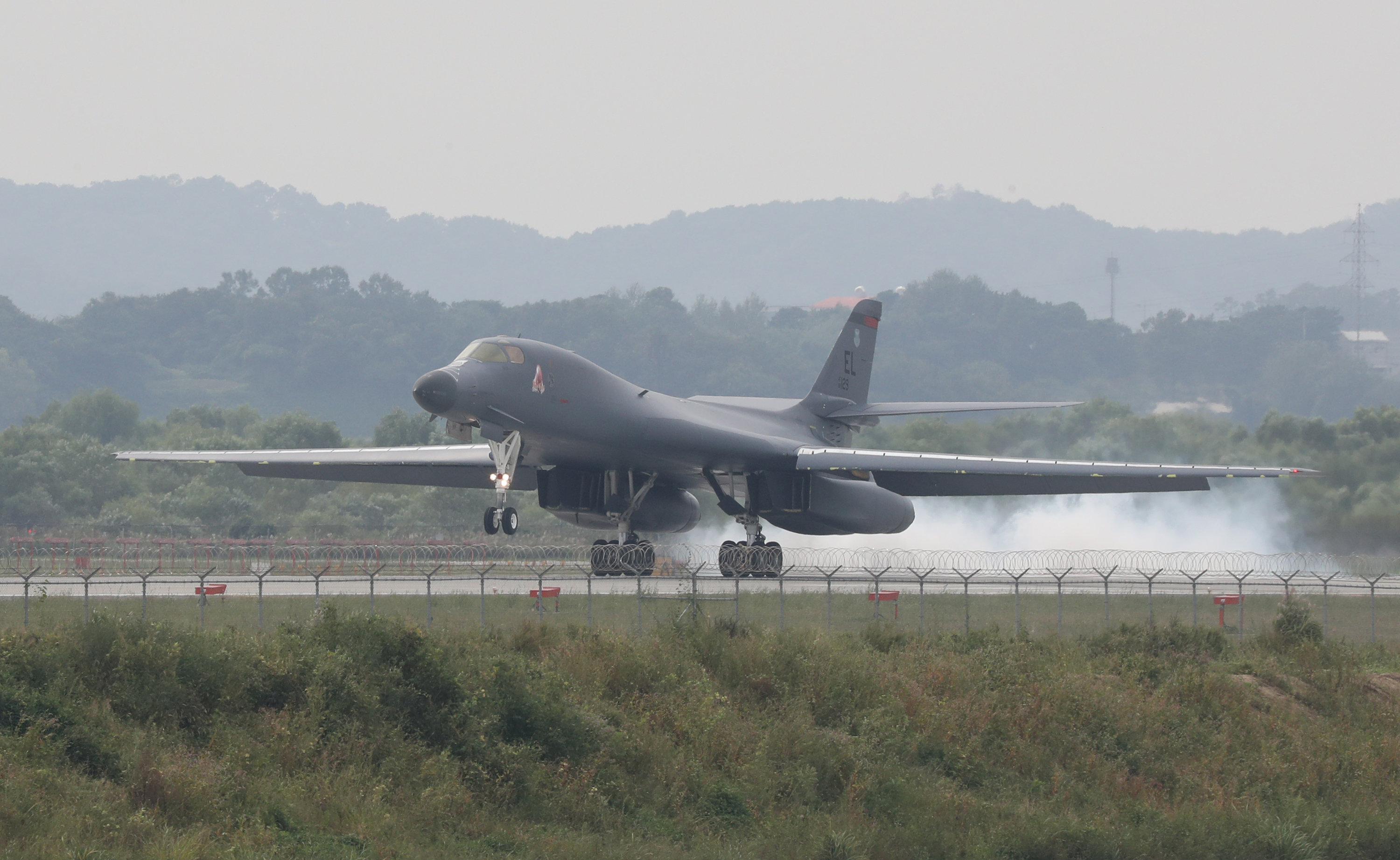