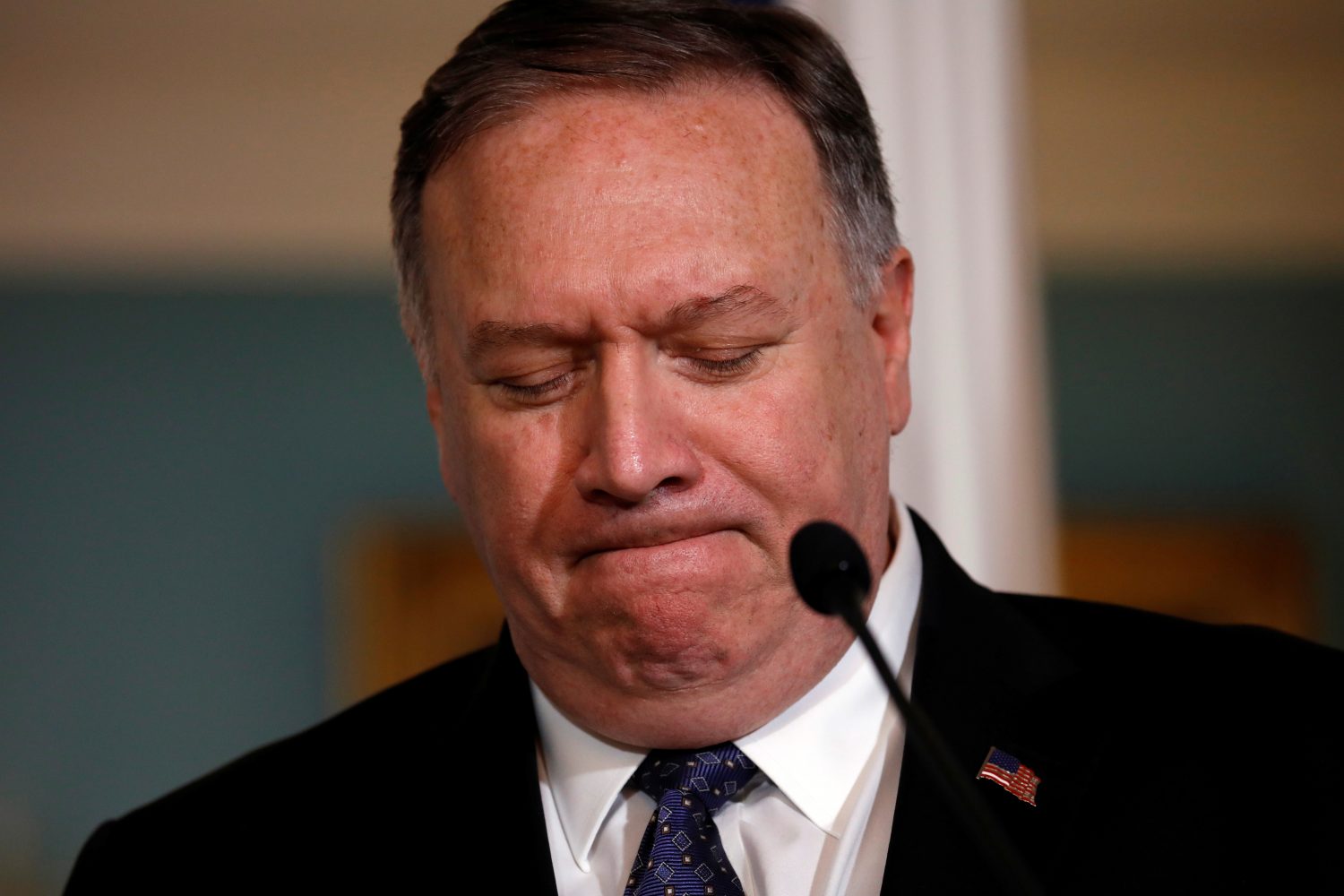 WASHINGTON (Reuters) – The United States has removed nearly 2.7 million barrels of Iranian oil from global markets daily as a result of Washington’s decision to reimpose sanctions on all purchases of Iran’s crude, U.S. Secretary of State Mike Pompeo said on Tuesday.

In an interview with MSNBC, Pompeo said the U.S. government was confident it could continue with its strategy.

The United States re-imposed sanctions on Iran in November after pulling out of a 2015 nuclear accord between Tehran and six world powers. In May, Washington ended sanction waivers given to importers of Iranian oil, aiming to cut Tehran’s exports to zero.

Iran exported about 100,000 bpd of crude in July, according to an industry source who tracks such flows and data from Refinitiv Eikon. If condensate, a light oil, is included, shipments were about 120,000 bpd a day.

“We have managed to take almost 2.7 million barrels of crude oil off of the market, denying Iran the wealth to create their terror campaign around the world, and we have managed to keep the oil markets fully supplied,” Pompeo said.

“I am confident we can continue to do that,” he added.

The Organization of the Petroleum Exporting Countries (OPEC), Russia and other producers have been cutting 1.2 million bpd since Jan. 1 to reduce global supply. OPEC in July renewed the pact until March 2020 to avoid a build-up of inventories as worldwide demand is seen weakening.

Despite OPEC’s actions along with U.S. sanctions on Iran and Venezuela, Brent crude international oil prices <LCOc1> have been relatively weak, falling on Tuesday to $59 a barrel from a 2019 high of $75, pressured by concerns about slowing demand.

The exact level of Iranian exports has become harder to assess since U.S. sanctions returned in November, meaning estimates fall into a range rather than a definitive figure.

(Reporting by Humeyra Pamuk and Doina Chiacu in Washington; Editing by Paul Simao) 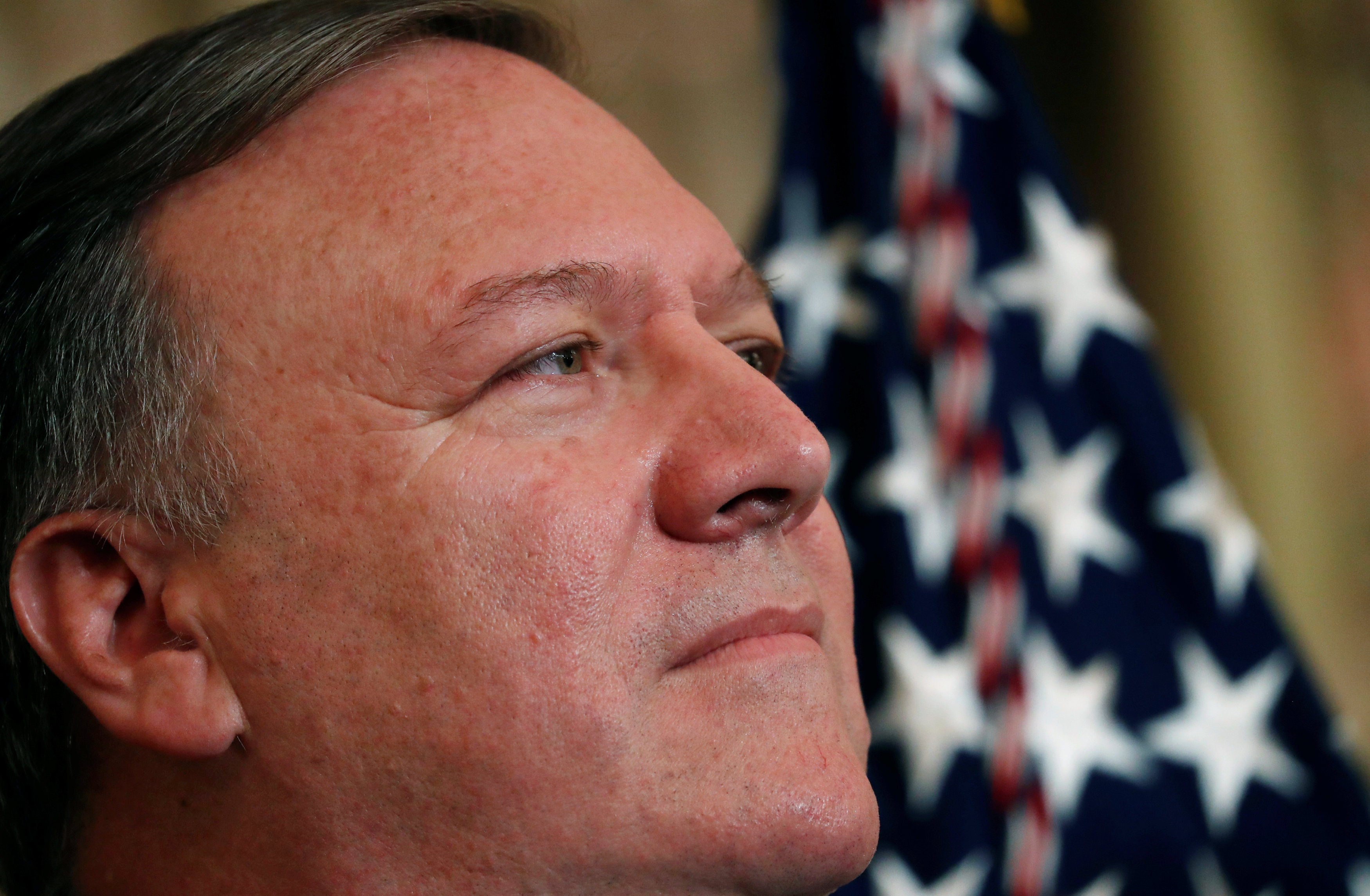 By Matt Spetalnick and Lesley Wroughton

WASHINGTON (Reuters) – President Donald Trump revealed on Tuesday that U.S. Secretary of State Mike Pompeo was on his way to Pyongyang to prepare for Trump’s summit with North Korean leader Kim Jong Un and expressed hope that three Americans held there would soon be released.

Trump said Pompeo, making his second visit to North Korea in less than six weeks, was expected to arrive “very shortly” and that the two countries had already agreed on a date and location for the unprecedented summit, though he stopped short of providing details.

While Trump said it would be a “great thing” if the three American detainees were freed, Pompeo, speaking to reporters en route to Pyongyang, said he had not received a commitment for their release but hoped North Korea would “do the right thing.”

Their release could signal an effort by Kim to set a more positive tone for the summit following his recent pledge to suspend missile tests and shut Pyongyang’s nuclear bomb test site.

While Kim would be giving up the last of his remaining American prisoners, whom North Korea has often used in the past as bargaining chips with the United States, a release could also be aimed at pressuring Trump to make concessions of his own in his bid to get Pyongyang to abandon its nuclear arsenal, something it has not signaled a willingness to do.

“Plans are being made, relationships are building,” Trump said of the planned summit during remarks at the White House that were otherwise focused on his decision to pull the United States out of the 2015 Iran nuclear deal.

“Hopefully, a deal will happen. And with the help of China, South Korea and Japan, a future of great prosperity and security can be achieved for everyone,” Trump added.

Pompeo made a secret visit to North Korea over the Easter weekend, becoming the first U.S. official known to have met Kim, to lay the groundwork for the planned summit. The meeting occurred before Pompeo’s nomination as secretary of state had been confirmed.

Trump suggested that dropping out of the Iran nuclear accord, which he has frequently denounced as a bad deal for the United States, would send a “critical message” not just to Tehran but also to Pyongyang. He has demanded that North Korea agree to give up its nuclear arsenal.

“The United States no longer makes empty threats. When I make promises, I keep them,” Trump said.

FATE OF THREE DETAINEES IN PLAY

Pompeo’s latest trip raised the prospects that the three Korean-American detainees – Kim Hak-song, Tony Kim and Kim Dong-chul – could be turned over to him.

“We’ve been asking for the release of these detainees for 17 months,” Pompeo said. “We’ll talk about it again. It’d be a great gesture if they’d agree to do so.”

Pompeo said he was hoping to finalize the agenda for the summit. He met Kim on this last trip but said he did not know exactly who he would meet this time.

Pompeo said he hoped to be able to outline a set of conditions that would create the opportunity for a historic change in the security relationship with North Korea and added that sanctions would not be lifted until U.S. objectives were met.

“We are not going to head down the path we headed down before,” he said. “We will not relieve sanctions until such time as we have achieved our objectives.”

Pompeo’s latest visit followed talks between Kim and South Korean President Moon Jae-in met on April 27 at the heavily fortified demilitarized zone between the countries, the first summit for the two Koreas in over a decade.

The North-South summit produced dramatic images and a declaration of goodwill. But it was short on specific commitments and failed to clear up the question of whether Pyongyang is really willing to give up nuclear missiles that now threaten the United States.

U.S. officials have been pressing Kim to free the three remaining American detainees as a gesture of sincerity before the summit, the first-ever meeting of sitting U.S. and North Korean leaders. Trump and Kim have exchanged insults and threats over the past year but tensions have eased in recent months.

Until now, the only American released by North Korea during Trump’s presidency was Otto Warmbier, a 22-year-old university student who returned to the United States in a coma last summer after 17 months of captivity and died days later.

The three still being held are Korean-American missionary Kim Dong Chul; Kim Sang-duk, who spent a month teaching at the foreign-funded Pyongyang University of Science and Technology (PUST) before he was arrested in 2017, and Kim Hak Song, who also taught at PUST.