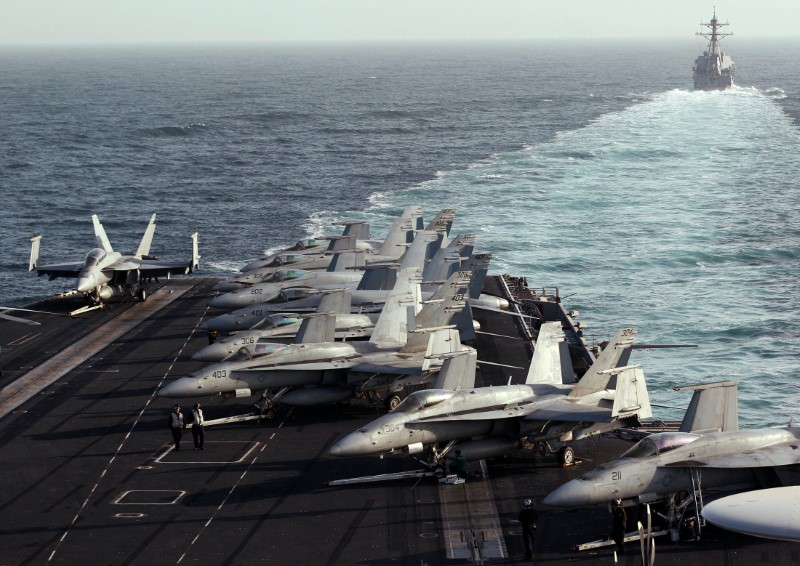 LONDON (Reuters) – The U.S. Navy stands ready to ensure freedom of navigation and free flow of commerce, a spokesman for the U.S. military’s Central Command said on Thursday, after Iran warned it will block oil shipments through the Strait of Hormuz.

Iran has threatened in recent days to close the strait, a vital route for world oil supplies, if Washington tries to cut Tehran’s exports.

An Iranian Revolutionary Guards commander said on Wednesday Iran would block any exports of crude for the Gulf in retaliation for hostile U.S. action.

“The U.S. and its partners provide, and promote security and stability in the region,” Central Command spokesman Navy Captain Bill Urban said in an email to Reuters.

Asked what would be the U.S. Naval Forces reaction if Iran blocks the Strait of Hormuz, he said: “Together, we stand ready to ensure the freedom of navigation and the free flow of commerce wherever international law allows.”

The Islamic Revolutionary Guards Navy (IRGCN) lacks a strong navy and instead focuses on an asymmetric warfare capability in the Gulf. It possesses many speed boats and portable anti-ship missile launchers and can lay naval mines.

A senior U.S. military leader said in 2012 the Guards have the ability to block the Strait of Hormuz “for a period of time” but the United States would take action to reopen it in such an event.

In May, U.S. President Donald Trump pulled out of a multinational deal under which sanctions on Iran were lifted in return for curbs to its nuclear program. Washington has since told countries they must stop buying Iranian oil from Nov. 4 or face financial measures. 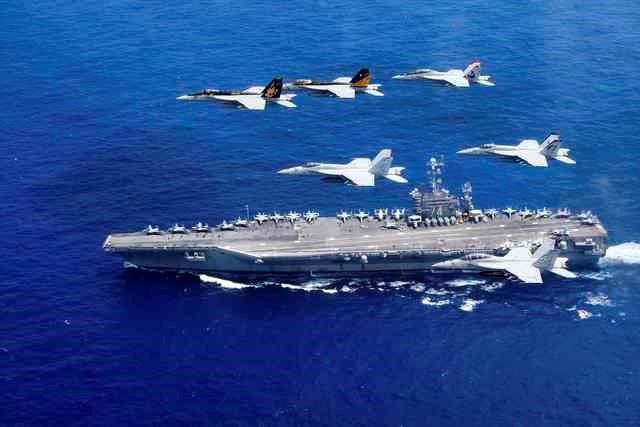 WASHINGTON (Reuters) – The U.S. Navy chief said on Monday he hoped the deployment of two aircraft carriers on a training mission in East Asia would deter any attempts to destabilize the region, where military tensions have risen amid China’s growing assertiveness.

The U.S. carriers John C. Stennis and Ronald Reagan began joint operations in seas east of the Philippines at the weekend in a show of strength ahead of an international court ruling expected soon on China’s expansive territorial claims in the contested South China Sea.

Admiral John Richardson, the chief of U.S. Naval Operations, told a Washington think tank it was not often the United States had two carrier strike groups in the same waters and it was a sign of U.S. commitment to regional security.

He referred to a similar deployment of a second U.S. carrier in the Mediterranean Sea last week, at a time when U.S. officials are raising alarm over Russia’s maritime expansion.

“Both here and in the Mediterranean, it’s a signal to everyone in the region that we’re committed, we’re going to be there for our allies, to reassure them and for anyone who wants to destabilize that region,” he told the Center for a New American Security.

“And we hope that there’s a deterrent message there as well.”

Richardson said China’s large-scale land reclamation in the South China Sea and militarization of artificial islands extended its potential ability to deny access to a region with precision missiles and radar, something that “demands a response.”

“Our response would be to inject a lot of friction into that system. Every step of that way, we would look to make that much more difficult,” Richardson said.

A PACOM statement quoted Rear Admiral John D. Alexander, commander of the Ronald Reagan carrier group, as saying it was an opportunity to practice techniques needed “to prevail in modern naval operations.”

“The U.S. Navy has flown, sailed and operated throughout the Western Pacific in accordance with international law for decades, and will continue to do so,” he said, referring to a series of freedom-of-navigation operations carried out by U.S. naval ships in the region in recent month to challenge China’s claims.

PACOM said the United States last conducted a dual carrier operation in the Western Pacific in 2014. Two carriers operated in the South China Sea and East China Sea in 2012.