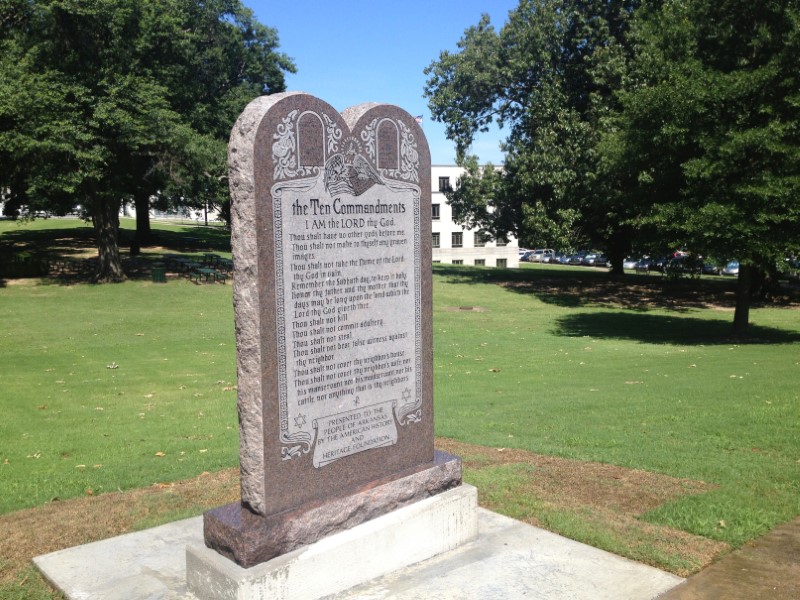 LITTLE ROCK, Ark. (Reuters) – A newly installed Ten Commandments monument on Arkansas state Capitol grounds was destroyed on Wednesday by a man police said drove his vehicle into the granite slab and posted the incident on Facebook.

“It was shattered into a lot of pieces,” Chris Powell, a spokesman for the Secretary of State and Capitol Police, said in an interview.

The suspect, identified as Michael Reed, 32, was arrested on three charges, including defacing an object of public interest. Police did not release Reed’s motive for toppling the monument installed in Little Rock on Tuesday.

Republican state Senator Jason Rapert, the main backer of the monument, said a replacement has been ordered.

“Frankly this guy was in a state of mind that he could very well have hurt somebody,” he said at a news conference.

A Facebook Live video posted to the account of a person named Michael Reed appears to show the slab’s destruction.

In the vehicle, a person can be heard saying: “Oh my goodness. Freedom,” and driving more than 20 mph (32 kph) until a smashing noise is heard.

“He actually was videoing it and broadcasting it live on Facebook as it happened,” police spokesman Powell said, adding an officer patrolling nearby arrested Reed.

No lawyer was listed for the suspect in online jail records.

In 2014, a person with the same name and age as the suspect used a vehicle to smash a Ten Commandments monument on Oklahoma Capitol grounds, law enforcement in Oklahoma said.

Reed then fled the scene and went into a federal building. He made threats against then President Barack Obama, they said. News reports in Oklahoma said he was never formally charged.

Arkansas has not officially confirmed whether the same Reed was involved in Wednesday’s incident, Powell said.

The 6-foot (1.8-meter) monument in Little Rock was funded with $26,000 in private donations. Legislation permitting it on the Capitol grounds was enacted in 2015, and whether that was appropriate has been debated ever since.

Courts have ordered the removal of similar religious monuments erected in Alabama and Oklahoma, which had rebuilt its monument after it was destroyed.

A civil liberties group has pledged a court challenge in Arkansas, saying the monument showed an unconstitutional government preference for a certain religion.

Since Arkansas’ Ten Commandments monument act was proposed, satanists and other groups have sought state permission to place markers on Capitol grounds, but their requests were rejected.

(Reporting by Steve Barnes in Little Rock and Jon Herskovitz in Austin, Texas; Editing by Taylor Harris and Grant McCool)

Two hackers have shown an exploit in the Jeep Cherokee that would allow them to take control of the vehicle from miles away.

In one demonstration, they caused the vehicle to crash.

Two cybersecurity experts, Charlie Miller and Chris Valasek, worked with Wired magazine to expose a flaw in the computer software that allows remote takeover the vehicle by anyone with knowledge of computer hacking.

In one test, Wired magazine staffer Andy Greenberg was driving 70 miles an hour near downtown St. Louis when the air conditioning suddenly blasted at maximum,  the radio changed to a new radio station and blasted full volume and the windshield wipers turned on while blasting wiper fluid making it almost impossible to see the road.

The hackers then put a picture of themselves on the car’s digital display.

The hackers had previously performed similar experiments with a Ford Escape and Toyota Prius, although they were in the backseats of the car.

In these tests, they were more than 10 miles away in the basement of one of the two security experts.

A test conducted away from traffic for safety reasons showed the hackers could lock up brakes, disable driving and transmission and kill the engine.  In one test, the driver was helpless as the car crashed off the road into a ditch.

Chrysler responded while they appreciate the efforts to show exploits that can be corrected, they were not pleased the information was released.

“Under no circumstances does FCA condone or believe it’s appropriate to disclose ‘how-to information’ that would potentially encourage, or help enable hackers to gain unauthorized and unlawful access to vehicle systems,” the company’s statement reads. “We appreciate the contributions of cybersecurity advocates to augment the industry’s understanding of potential vulnerabilities. However, we caution advocates that in the pursuit of improved public safety they not, in fact, compromise public safety.”