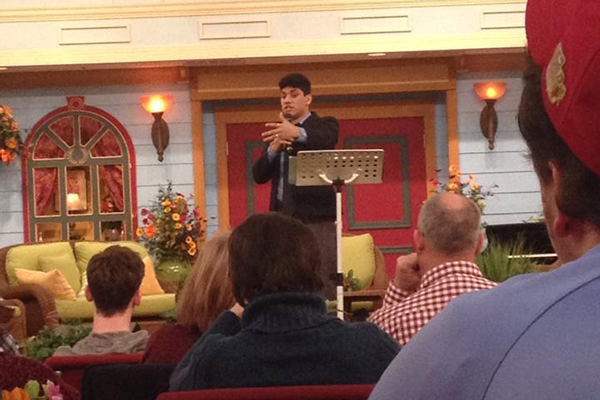 It’s really amazing how faithful God is and how He fulfills certain prophetic words that He may have given you many, many years before. This past week, I was so sick that I couldn’t go down to the service at Morningside to hear Ricky, my 16-year-old son preach, but I watched him on the live stream.

I was so proud as I saw this figure of a dark curly haired young man in a suit with a Bible walking up to the podium. And then suddenly, I heard the Lord say, “today is the fulfillment of the prophecy I showed you in a vision long ago about your son.”

I was astounded. It was like “Throwback Thursday” when we post things on the web that were from times past. God had given me this flashback of a vision from my early walk with Him. Let me tell you about it.

Many, many years ago when I was new in the Lord, He showed me a vision of a young man – with dark curly hair – carrying a Bible – and walking up to preach. He told me that this young man was my son, which took me aback because I was not married and would never be able to bear a son – physically, that is. I guess I was kind of like Sarah, or Hannah, or Rachel. I had longed for children and at times I was overcome with grief because I had none. But God heard their cries, and He heard mine too.

When God shows you something, He will bring it to pass! I remember the scripture in 1 Timothy 1:18 where Paul tells Timothy to “war a good warfare” with the prophecies that had gone out over him. It’s the same with prophetic visions. If you have a promise from God, pray into that until you see it come to pass! Don’t let your own doubts and unbelief hinder what God has said!

Over the years, and through the many spiritual journeys on which the Lord takes you, you may not remember them all… until the time when they are brought back to you to witness of the Lord’s faithfulness. I had all but forgotten that vision – but God hadn’t. He is faithful, whether we remember or not.

You see, there were many steps in between that vision and the fulfillment of it. Some steps were tests, others were growth, and some were just necessary to arrange my life. God wanted to woo me to Him and teach me to “seek first the kingdom” and THEN He will give you the desires of your heart (Matthew 6:33, Psalm 37:4). Don’t ever give up on your dreams. God won’t give up on them either! God is the giver of dreams!

Ricky is an amazing young man and I say that not just because he is my son, but because God has His hand on him! Ricky is already preaching things that are far beyond his years, and that is because he carries an anointing! He is a fulfillment of prophecy, and I couldn’t be prouder to be his Mother.