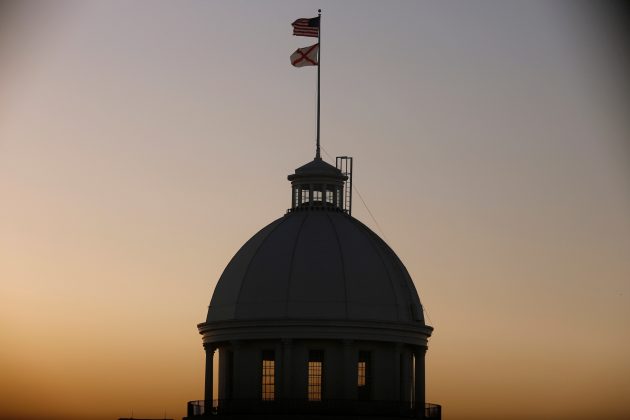 FILE PHOTO: The U.S. Flag and Alabama State Flag fly over the Alabama Governor's Mansion as the state Senate votes on the strictest anti-abortion bill in the United States at the Alabama Legislature in Montgomery, Alabama, U.S. May 14, 2019. REUTERS/Chris Aluka Berry

(Reuters) – The American Civil Liberties Union (ACLU) and Planned Parenthood filed a lawsuit on Friday challenging a law enacted by Alabama last week that bans nearly all abortions and makes performing the procedure a felony punishable by up to 99 years in prison.

The lawsuit is one of several the groups have filed or are preparing to file against states that recently passed strict anti-abortion measures in an effort to prompt the U.S. Supreme Court to overturn Roe v. Wade, the 1973 landmark case that guarantees a woman’s constitutional right to abortion.

“This dangerous, immoral, and unconstitutional ban threatens people’s lives and well-being and we are suing to protect our patients’ rights,” Leana Wen, president of the Planned Parenthood Federation of America, said in a statement.

Anti-abortion advocates expected legal challenges to Alabama’s new law, which will be the most restrictive in the nation when it takes effect in November, and say they welcome the chance to have a court test their conviction that a fetus’ right to life is paramount.

Also on Friday, Missouri Governor Mike Parson signed a bill into law that bans abortion beginning in the eighth week of pregnancy.

Earlier this year, Georgia, Kentucky, Mississippi and Ohio outlawed abortion after a doctor can detect an embryonic heartbeat, which can occur at six weeks, often before a woman knows she is pregnant.

The wave of anti-abortion legislation reflects a boost of confidence among anti-abortion advocates after Republican President Donald Trump nominated two conservative judges, Neil Gorsuch and Brett Kavanaugh, to the U.S. Supreme Court, tilting the court’s political balance to the right.

Alabama state Senator Clyde Chambliss, a Republican, supports his state’s new law and said the whole point of the ban was “so that we can go directly to the Supreme Court to challenge Roe versus Wade.”

The ACLU and Planned Parenthood obtained an injunction from a judge in Kentucky in March, blocking that state’s abortion ban. The organizations have filed lawsuits in Ohio and are preparing to do so in Georgia, they said in a statement on Friday.