(Reuters) – Subtropical storm Alberto fizzled into a subtropical depression as it rolled into Alabama on Tuesday but forecasters warned of potentially dangerous flash floods even as winds dropped to 30 miles per hour (48 km per hour). 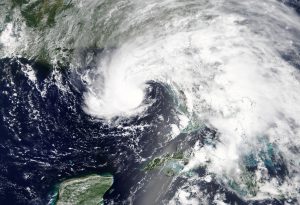 Subtropical Storm Alberto is pictured nearing the Florida Panhandle in this May 27, 2018 NASA handout photo. NASA/Handout via REUTERS

“It’s slowly weakening and it’s not regaining any strength,” Roth said. “The chances of it spinning off tornadoes now has dropped to virtually zero.”

The National Hurricane Center (NHC) canceled coastal warnings and watches for the storm, which spun up days before the formal start of the hurricane season on June 1. Minor power outages were reported in north Florida, and the state’s emergency response team started closing shelters on Monday, citing a lack of need.

Alberto will probably weaken through Tuesday as it moves northward into the Tennessee Valley and then to the Ohio Valley, finally withering into a “remnant low pressure storm” by Tuesday evening, with winds at around 25 mph (40 kph), Roth said.

The NHC warned it would still deliver heavy, potentially damaging rains of 2-6 inches (6-15 cm), with as much as 12 inches (30 cm) in some areas in north Florida and Alabama through Tuesday night.

It could dump up to 6 inches (15 cm) of rain as it moves north toward lower Michigan by Wednesday evening, officials said.

Two journalists covering the worsening weather in North Carolina were killed on Monday when a tree fell on their vehicle.

Royal Dutch Shell Plc was sending workers back to the eastern Gulf of Mexico and Chevron Corp restored some production on Monday after the storm’s passage.

Shell plans to restore production at its Ram Powell Hub in the Viosca Knoll area of the Gulf as it soon as the platform can operate safely, the company said.

Four deadly hurricanes struck the United States last year, killing at least 144 people and causing billions of dollars in damage, massive power outages and devastating hundreds of thousands of homes and businesses, according to the NHC.