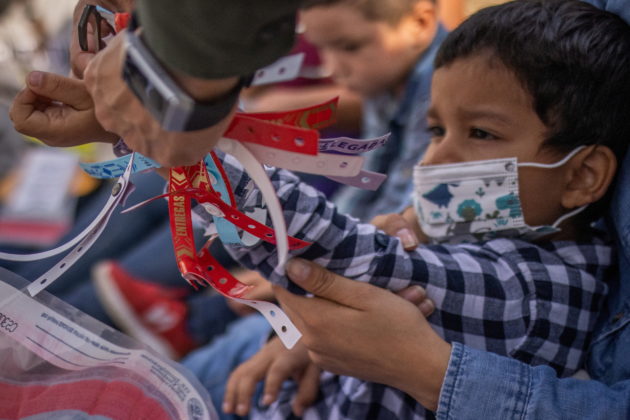 By Ted Hesson and Mica Rosenberg

WASHINGTON (Reuters) – U.S. President Joe Biden’s administration is racing to deal with an increasing number of migrant children arriving at the U.S.-Mexico border, but it has limited options and “none are great,” one U.S. official said.

The influx, which comes as Biden relaxes some of former President Donald Trump’s more restrictive immigration policies, has left the Democratic president facing criticism not only from opposition Republicans but also members of his own party, who say some children are being held in custody for too long.

Biden’s administration, however, faces legal, space and cost constraints as it tries first to house and then speed the release of thousands of children coming over the border.

Under U.S. law, federal health officials are required to provide housing and care for unaccompanied migrant children until they can be placed with a parent or other sponsor, but they have limited bed space in state-licensed facilities to do so.

If the number of children arriving without a parent or legal guardian continues to rise, officials will have to expand emergency housing, start a time-consuming process to open more licensed facilities or release children faster.

“We will have to make big and small changes,” the U.S. official, who requested anonymity to discuss internal operations, told Reuters. “(We are) assessing options now because none are great.”

Migrant children are supposed to be transferred out of Border Patrol custody within 72 hours. But when shelter space is limited, they can get stuck in border detention centers for longer periods – as is happening now, according to a U.S. Customs and Border Protection (CBP) official who spoke on the condition of anonymity.

In 2019, migrant advocates raised concerns about hundreds of children – including toddlers – being detained without adequate food, clean clothes and diapers, toothbrushes or showers.

Robert Carey, who directed the refugee office at the U.S. Department of Health and Human Services (HHS) under former President Barack Obama, said changing the policies around housing children will not happen quickly “even if they are putting a tremendous amount of effort into it.”

Biden is already running up against some of the same issues that vexed previous administrations.

The relaxation of the restrictions boosted capacity to about 13,000, with 8,100 children in government custody as of Monday. But beds are filling up quickly.

While officials acknowledge that allowing more children into the shelters will raise the risk of more COVID-19 cases, the administration says it has little choice, since it takes so long to open new facilities.

Long-term shelters need state licensing that complies with local child welfare laws, a process that could take up to a year and can be hamstrung by local opposition from both critics of detention centers and anti-immigration groups.

Emergency influx shelters can be erected more quickly on federal properties, and the Biden administration is surveying agencies to see what options might be available, including military bases.

Finding adequate federally controlled land or buildings that can be made available and converted for children in a short amount of time is a challenge, said Mark Greenberg, a former top official at HHS, which oversees the shelters.

Greenberg worked at the department during a 2014 surge in unaccompanied minors.

“We spent a lot of time to trying to identify other federal properties that might be available in the future,” he said of the efforts. “Most agencies did not have property to offer.”

The best option would be smaller-scale shelters or foster homes, but finding and opening those sorts of spaces are longer-term projects, according to Leah Chavla, a senior policy adviser with the New York City-based Women’s Refugee Commission.

One way to lessen the need for housing is to speed up the release of children to U.S. sponsors – something Biden has asked about in meetings, according to White House Press Secretary Jen Psaki.

But move too fast and predators may try to take advantage of the system, according to former HHS officials. In 2013 and 2014, for example, some Guatemalan teenagers were released and then forced to work on an egg farm in Ohio.

“We need to take the time to vet the individuals who these kids are being connected with,” Psaki told MSNBC on Tuesday. “We’re trying to figure out how to expedite this process.”

Some measures are already being put in place, but the moves are unlikely to have a significant effect on the housing crunch if the number of children arriving keeps rising.

U.S. officials are now sending unaccompanied children to shelters in the interior of the country instead of automatically quarantining them for 14 days near the border, according to a person familiar with the decision. They are also streamlining background checks of sponsors by moving to a new database system.

Cecilia Munoz, a top White House official dealing with immigration issues under Obama, said handling unaccompanied minors at the border will be one of the biggest challenges for the Biden administration, which she said inherited problems caused by Trump’s border policies.

“I’ve lived through my own version of this,” Munoz said. If “you have hundreds of kids in Border Patrol lock ups, and they can’t stay there, you have few options and your options are more expensive.”