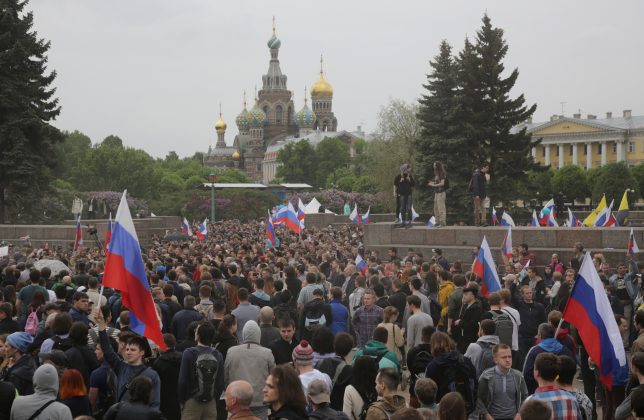 By Svetlana Reiter and Andrew Osborn

The protests, called by Navalny, a strong critic of Russian President Vladmir Putin, drew thousands of people and were some of the biggest in Russia since 2012.

“Russia without Putin” and “Russia will be free” chanted the demonstrators, including many young people, who crowded into central Moscow on a public holiday.

Navalny, who is mounting a long-shot bid to unseat Putin in an election next year, had called for mass protests in Moscow and other cities against official corruption.

The Kremlin has dismissed Navalny’s graft allegations, accusing him of irresponsibly trying to whip up unrest.

The scale of Monday’s protests in Moscow and smaller ones in St. Petersburg and scores of other cities suggests Navalny has maintained his campaign’s momentum despite more than 1,000 people being arrested after the last such protest in March.

That is likely to embolden him to call for more protests and keep Putin, who is expected to run for and win re-election next year, under rare domestic pressure.

“Neither mass detentions nor criminal cases after March 26 (the last protest) worked,” wrote Lyubov Sobol, a Navalny ally, on social media. “People are not afraid.”

Navalny’s wife, Yulia, said her husband had been detained as he tried to leave their home. Reuters witnesses saw a police car leaving his apartment compound at high speed, followed a few minutes later by a minibus carrying about 10 policemen.

Electricity in his office was cut at around the same time as he was detained, briefly bringing down a live feed of the protests, Navalny’s spokeswoman said.

Navalny was accused of violating the law on organizing public meetings and of disobeying a police officer, police said.

Authorities in Moscow said Monday’s protest was illegal and drafted in riot police who fired pepper spray and used batons to break it up, detaining people and bundling them onto buses.

“I’m sick of the Putin system,” he said. “It’s been unchanged for the last 17 years. There is so much evidence that our officials are stealing with impunity.”

“I’m not afraid if I get detained,” Dima said.

The Interior Ministry said the turnout at the Moscow protest was about 4,500 — significantly fewer than the numbers estimated by Reuters reporters, who put the turnout in the low tens of thousands. 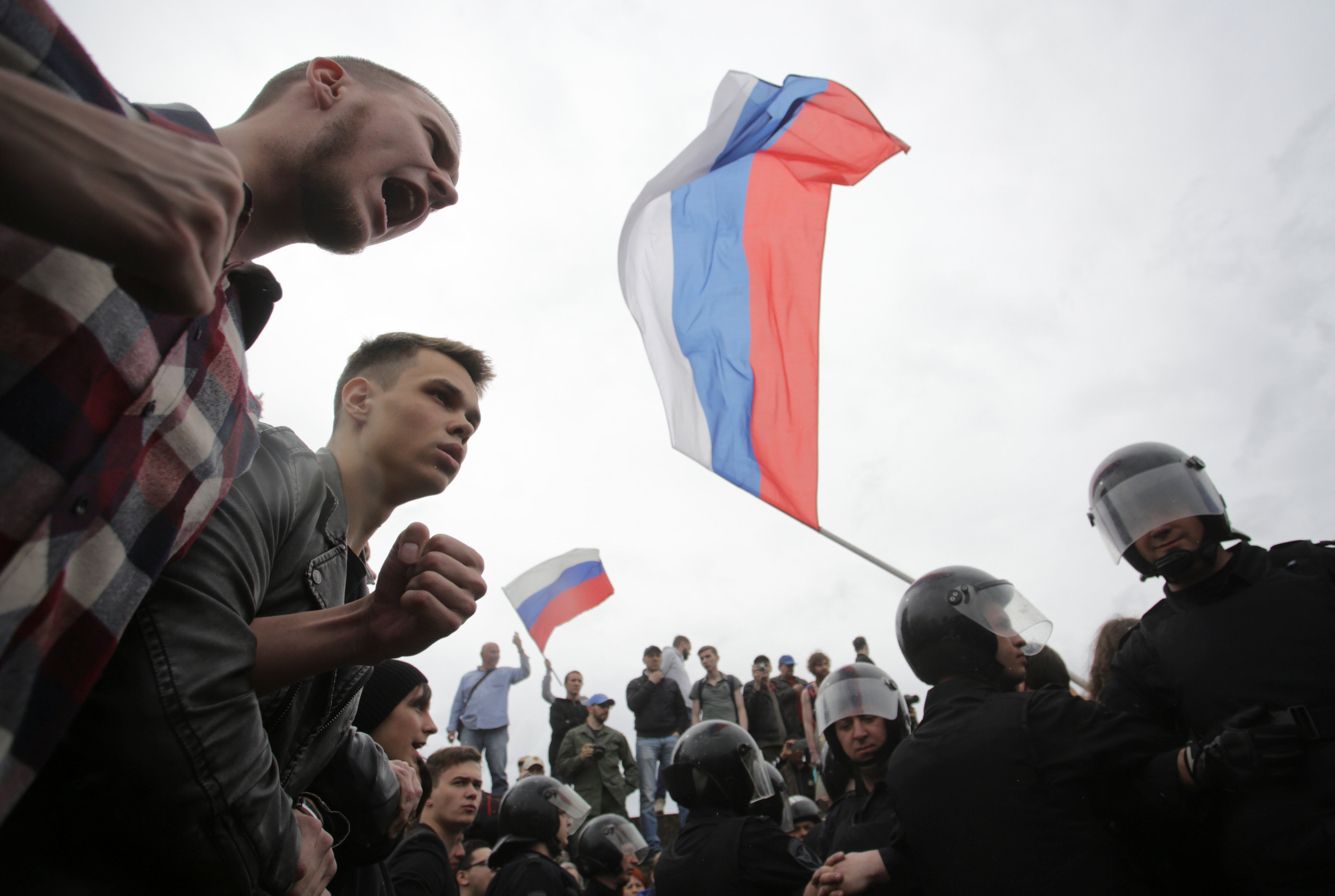 Navalny brought thousands onto the streets across Russia in March, the largest such protests since a wave of anti-Kremlin demonstrations in 2012. Navalny was fined and jailed for 15 days for his role in those protests.

Moscow authorities had initially authorized a venue for Monday’s protest away from the city center. But Navalny switched it to Tverskaya Street, Moscow’s main avenue near the Kremlin. The General Prosecutor’s Office had warned that a protest there would be illegal.

The area of Tsverskaya Street near where Navalny’s supporters congregated was hosting an officially-organized festival, with actors re-enacting periods of Russian history.

Video footage showed a protester clambering onto a mock-up of a wartime sandbag fortification holding a poster calling Putin a liar, before being pulled to the ground by a cast member dressed as a World War Two Soviet soldier. 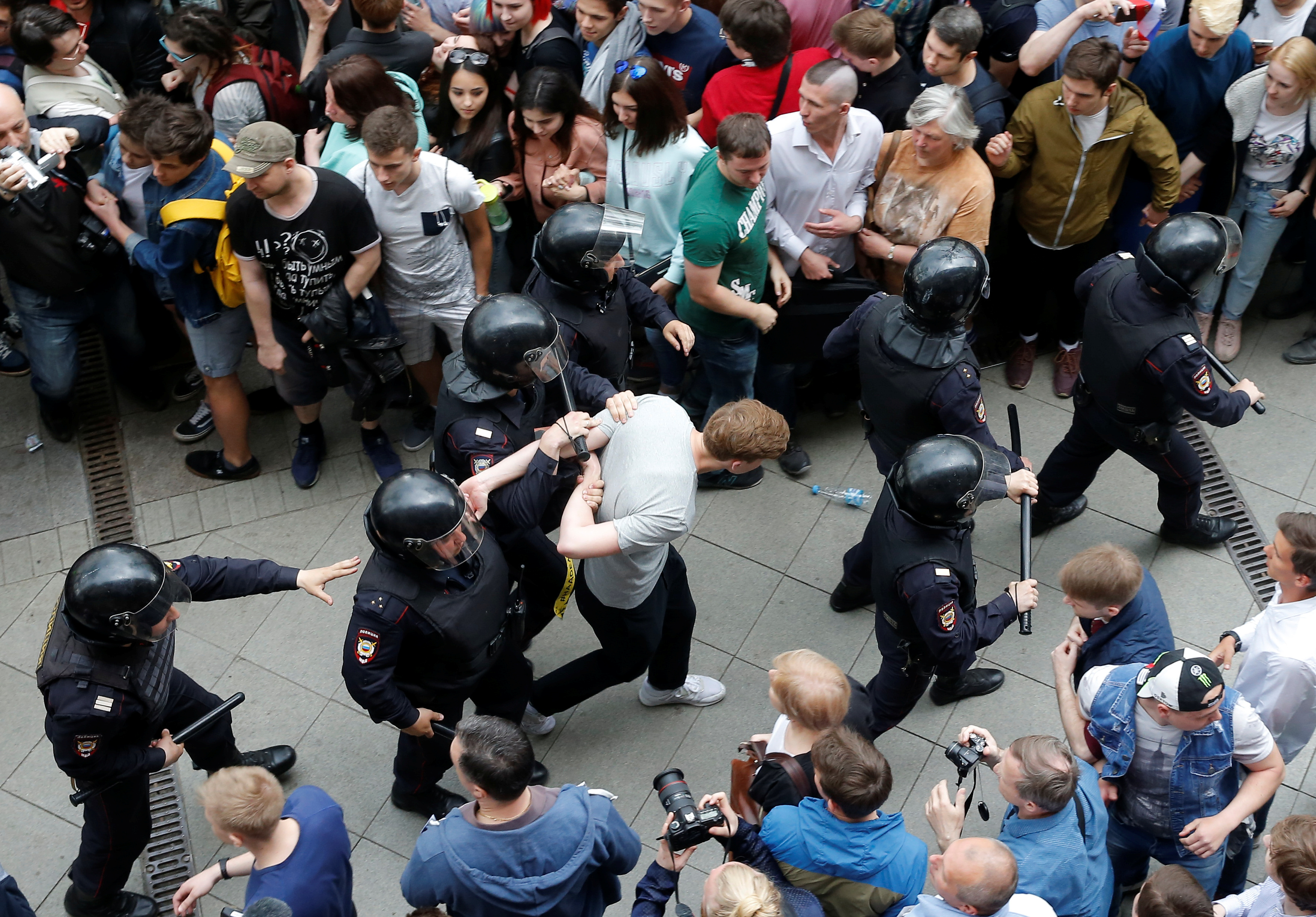 For now, polls suggest Navalny has scant chance of unseating Putin, who enjoys high ratings. It is unclear too if the Kremlin will even let Navalny run for the presidency.

But the 41-year-old lawyer turned political street campaigner hopes anger over corruption may boost his support.

A video he made accusing Medvedev of living far beyond his means has garnered over 22 million online views to date.

Navalny, who had a green liquid thrown in his face in April, robbing him of some of his sight, said hundreds of people had also attended demonstrations in Russia’s Far East on Monday morning.

“I want changes,” wrote Navalny in a blog post last week. “I want to live in a modern democratic state and I want our taxes to be converted into roads, schools and hospitals, not into yachts, palaces and vineyards.”