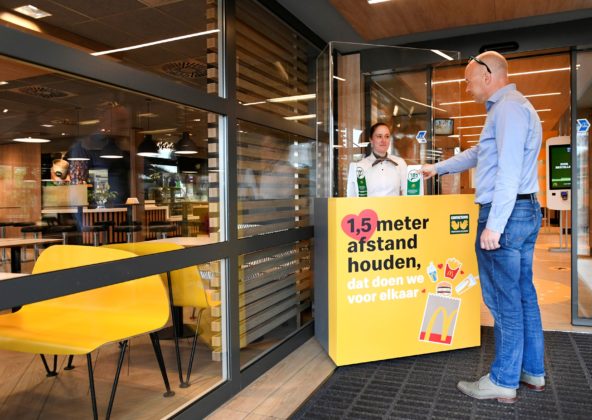 A man takes a number at a prototype location of fast food giant McDonald's for restaurants which respect the 1.5m social distancing measure, amid the coronavirus disease (COVID-19) outbreak, in Arnhem, Netherlands, May 1, 2020. REUTERS/Piroschka van de Wouw

AMSTERDAM (Reuters) – Big Macs delivered on meal trolleys, hand sanitizers at the entrance and designated waiting spots to separate customers could become a feature of McDonald’s restaurants in the Netherlands when they are allowed to reopen.

In a trial at a restaurant in the city of Arnhem, McDonald’s has been looking for ways to maintain social distancing when the coronavirus lockdown is relaxed.

“We have tried to figure out how to keep our customers and employees safe, while maintaining a restaurant atmosphere,” McDonald’s Netherlands spokeswoman Eunice Koekkoek told Reuters.

“These are drastic changes, but we hope to make them in a way that customers don’t notice them too much.”

Restaurants, bars and other public places in the Netherlands have been closed since March 15. As of Friday, 39,791 coronavirus cases had been confirmed with 4,893 deaths.

But new infections have been dropping, prompting calls to loosen the lockdown after its current deadline of May 19.

A decision on whether to reopen restaurants and bars is expected around May 12, but Prime Minister Mark Rutte has ruled out a return to normal.

If they do reopen, they will have to keep customers and staff at least 1.5 meters (5 feet) apart to avoid a new wave of infections.

McDonald’s says it could introduce table service, with burgers and fries wheeled to customers on trolleys from which they can pick up their orders.

Other new features would include hand-washing stations at the entrance and a host behind a plastic screen showing customers their place in line.

Many restaurant owners in the Netherlands fear social distancing will simply put them out of business.

But McDonald’s expects its new set-up will work at 180 larger restaurants out of its 252 franchises in the country.

“On average this will allow us to serve around 66% of our normal number of customers,” Koekkoek said.

“We don’t expect reopening to be allowed before June. But even then, we will move in steps. Readjusting 180 restaurants is a tall order.”

About three quarters of McDonald’s 39,000 restaurants worldwide were operational as of Thursday, including almost all its nearly 14,000 outlets in the United States, where drive-throughs are common.