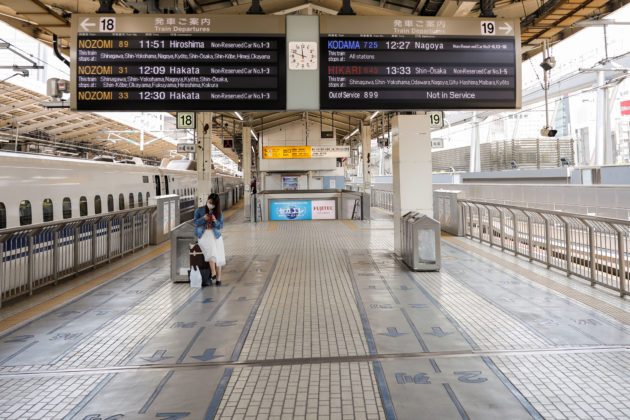 A passenger wearing a face mask waits for a train on an almost empty platform of Tokyo station where fewer people than usual are seen during Golden Week holidays following the coronavirus disease (COVID-19) outbreak, in Tokyo, Japan, April 29, 2020. REUTERS/Kim Kyung-Hoon

(Reuters) – More than 3.27 million people have reportedly been infected by the novel coronavirus globally, and 232,200 have died, according to a Reuters tally as of 0200 GMT on Friday.

* Britain was now past the peak of its coronavirus outbreak, Prime Minister Boris Johnson said, promising to set out a plan next week on how the country might start gradually returning to normal life.

* Russian Prime Minister Mikhail Mishustin has been diagnosed with the coronavirus, as confirmed cases surged past the 100,000-mark.

* More than 1.07 million people have been infected with the new coronavirus in the United States and 62,891 have died, according to a Reuters tally as of 0200 GMT on Friday.

* Half of all U.S. states forged ahead with their own strategies for easing restrictions on restaurants, retail and other businesses shuttered by the coronavirus crisis.

* U.S. President Donald Trump said on Thursday his hard-fought trade deal with China was now of secondary importance to the coronavirus pandemic and he threatened new tariffs on Beijing, as his administration crafted retaliatory measures over the outbreak.

* Canada’s coronavirus curve is flat but worrying trends are emerging, according to its top medical officer, as Alberta unveiled a plan to reopen its economy gradually.

* Brazil reported a record 7,218 cases in the last 24 hours and 435 additional fatalities.

* Japan will formally decide as early as Monday whether to extend its state of emergency, which was originally set to end on May 6.

* Malaysia will allow majority of businesses to resume operations from May 4.

* Australia will consider next Friday whether to relax coronavirus-related mobility restrictions.

* Irish manufacturing activity suffered its sharpest monthly decline on record in April as output collapsed, while British factory output risks falling by more than half during the current quarter, a trade body said.

* South Korean exports plunged at their sharpest pace since the global financial crisis in April.

* Consumer prices in Japan’s capital city fell for the first time in three years in April and national factory activity slumped, increasing fears that the pandemic could tip the country back into deflation.

* France suffered its sharpest economic contraction since records began in 1949 in the first quarter.

* Democratic Republic of Congo has cut its 2020 economic growth forecast to -1.9% and is expecting its economy to contract, its central bank said.

* Chile’s unemployment rate rose to 8.2% in the first quarter from the same period a year ago, hitting a decade high.

(Compiled by Vinay Dwivedi and Uttaresh.V; Editing by Shounak Dasgupta and Sriraj Kalluvila)