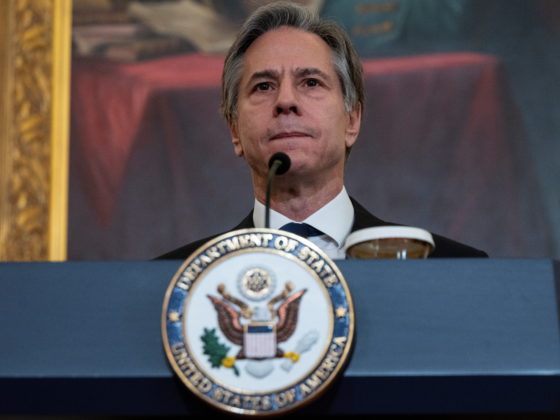 By Humeyra Pamuk and Simon Lewis

WASHINGTON (Reuters) – The United States is watching for signs that Russia may be using energy as a political tool in Europe’s energy crunch, Secretary of State Antony Blinken said on Wednesday, adding that Washington was committed to take appropriate action, along with Germany, if Moscow were to take that path.

Blinken and Ukrainian Foreign Minister Dmytro Kuleba met at the State Department and signed a charter on a strategic partnership. Discussions focused on Ukraine’s neighbor, Russia, which Kuleba said was already using gas supplies as a weapon.

Blinken said Washington was also concerned by reports of “unusual Russian military activity” near Russia’s border with Ukraine, warning that escalatory or aggressive action would be of concern to the United States.

“Should Russia attempt to use energy as a weapon or commit further aggressive acts against Ukraine, we are committed, and Germany is committed, to taking appropriate action,” Blinken said, adding that Washington was “watching very carefully for signs” that Russia was using energy as a weapon as it has in the past.

Russia has been accused of holding back energy supplies amid record high gas prices, but Putin has blamed the EU’s energy policy and said Russia can boost supplies to Europe once the Nord Stream 2 gas pipeline gets approved.

“Russia could and should take steps to alleviate the energy crunch by increasing gas supplies,” said Blinken.

Washington opposes the $11 billion pipeline, currently nearing completion, which runs under the Baltic Sea to carry gas from Russia’s Arctic region to Germany.

The Biden administration has waived sanctions on the pipeline’s operator and reached an agreement with Germany in July over the pipeline. Germany agreed to take action if Russia uses energy as a weapon in its relations with Ukraine, but the pact did not provide a specific criteria for how that would be judged.

The United States was looking to Germany to “make good on” its promise to make sure that Nord Stream 2 is not a substitute for transit deliveries of gas though Ukraine,” Blinken said.

“What we see is that Russia is already using gas as a weapon,” Kuleba said in response, adding that Ukraine wanted Germany to use its “leverage” over Russia

“Russia should receive a very strong message not only from the United States and from other capitals, but also from Berlin, that this is not the game that will benefit Russia.”

In the charter signed on Wednesday, the United States vowed to support Ukraine’s efforts to counter armed aggression, economic and energy disruptions and malicious cyber activity by Russia, including by maintaining sanctions on Russia, and applying other relevant measures.

Washington remained committed to assisting Ukraine with continuing its robust training exercises and reiterated that it supported Kyiv’s efforts to maximize its status as a NATO Enhanced Opportunities Partner.

Kuleba underscored the importance of support from the United States and added that Ukraine would benefit from any potential defense cooperation that would strengthen its capabilities including intelligence sharing or air defense systems.

“We are in a situation where we cannot allow losing or wasting any time and we are looking forward to working with the United States in this field,” he said.