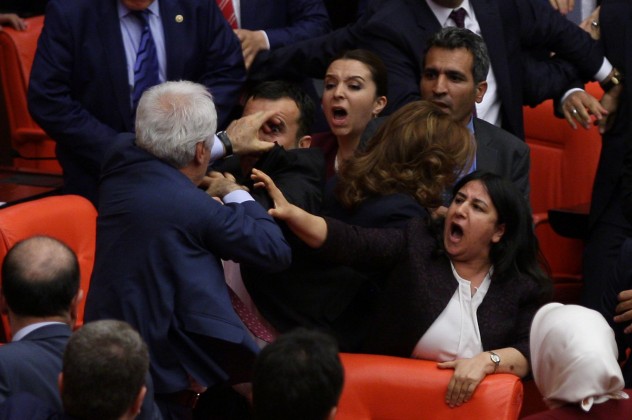 ANKARA (Reuters) – Brawls between lawmakers from Turkey’s ruling AK Party and the pro-Kurdish opposition have delayed efforts to pass legislation on a migration deal with the European Union, but the country’s EU minister said a deadline next week would still be met.

Deputies threw punches, pushed and tried to restrain each other in the assembly late on Wednesday in a row over military operations targeting Kurdish militants in Turkey’s largely Kurdish southeast.

The acting speaker announced at the end of Wednesday’s session that, following these scuffles, the parliament would now not meet again in full session until Monday.

Lawmakers had been expected to work on Friday and Saturday on legislation needed for Turks to secure visa-free travel to Europe, a key part of Ankara’s deal with the European Union on stopping uncontrolled migration to Europe.

Brussels aims to propose waiving visas for Turks on May 4 but that is strongly opposed by some EU member states. The EU has said Turkey fully meets fewer than half of the 72 criteria and that its conditions will not be softened.

“If the security surveillance law had been completed last night, as of today Turkey would have done what is required,” EU Affairs Minister Volkan Bozkir told broadcaster NTV.

“The 10 or so remaining articles … will God willing be passed on Monday. But we can effectively say it’s done. After that the 72 expectations are met from our perspective.”

Bozkir said he expected the EU Commission to recommend the lifting of visas for Turks in a report next week.

Under the deal with the EU, Turkey agreed to take back migrants who cross to Greece illegally in return for financial aid, the prospect of accelerated EU accession talks and quicker visa-free travel to Europe for Turks.

The fierce exchanges erupted in parliament after MP Ferhat Encu from the pro-Kurdish Peoples’ Democratic Party (HDP) referred to the killing of civilians in military operations against Kurdistan Workers Party (PKK) militants.

Thousands of militants and hundreds of security force members and civilians have been killed since the PKK resumed its insurgency in the southeast last summer after a 2-1/2-year ceasefire, shattering a peace process.

While the general assembly was shut, there were scuffles again on Thursday during a meeting of a constitutional commission which was discussing legislation on lifting lawmakers’ immunity from prosecution.

President Tayyip Erdogan accuses the HDP of being an extension of the PKK and has said members of parliament with links to militants should be prosecuted. Around half of some 550 requests to lift deputies’ immunity are aimed at HDP members.

The PKK, designated a terrorist group by Turkey and its Western allies, launched an insurgency in the southeast in 1984 and more than 40,000 people have been killed in the conflict.